The restoration of Pontormo’s Deposition

When you need to restore a Pontormo, Simonetta Brandolini d’Adda, President of the not-for-profit Friends of Florence Foundation, is the woman to call. Thanks to her, I recently had the opportunity to visit Pontormo’s Deposition in the studio of Daniele Rossi, where its restoration, and that of the entire Capponi Chapel, has been sponsored by board members of the Foundation, Kathe and John Dyson, for €105,000. This is the third major Pontormo project these generous individuals are behind. 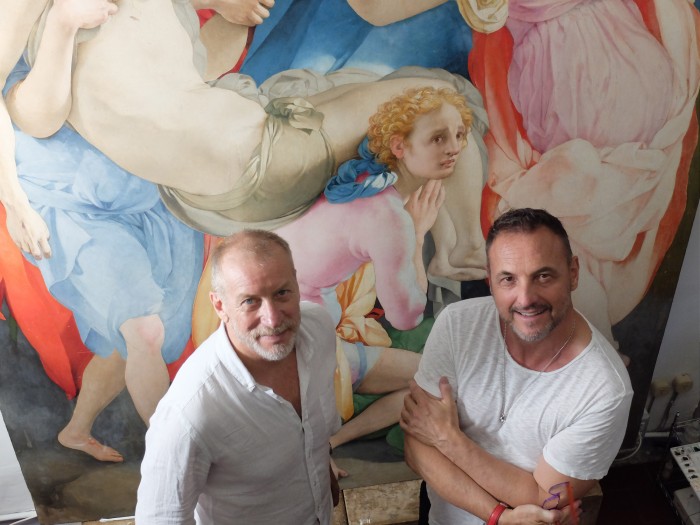 What I saw that day was a bright canvas, with plenty of depth, and an impressive gold frame that will set it off brilliantly when the two are reunited. Anyone used to seeing this work in the Capponi chapel will remember it in other terms. That’s the genius of restoration.

But before we get to looking at the altarpiece, let’s go over the history of the chapel. The Capponi Chapel, the first on the right as you enter the church, was designed by Filippo Brunelleschi for the Barbadori family around 1420. The Capponi family took it over in 1525 and dedicated it to the Pietà. Lodovico Capponi commissioned Jacopo Carucci, known as Pontormo, to produce the decorative scheme for the chapel in 1526. Vasari tells us that Pontormo took three years to complete the work, finishing the chapel in 1528. 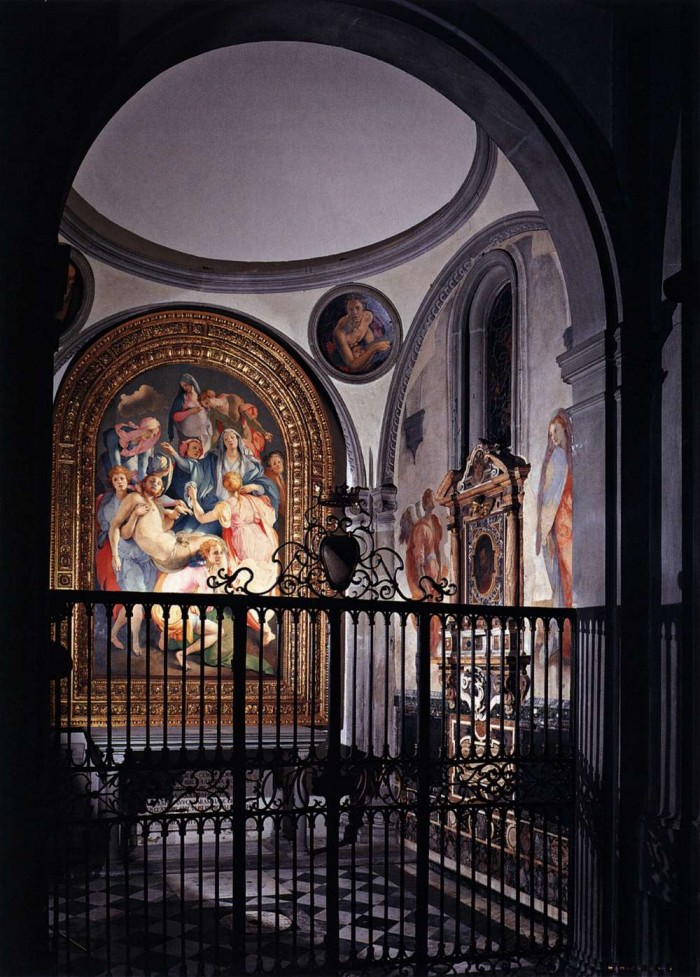 The Capponi Chapel (Photo from www.wga.hu)

The chapel consists of a large altarpiece on a poplar wood panel commonly referred to as representing a Deposition, two now detached frescoes of the Virgin Annunciate and the Angel Gabriel on the inside wall of the church, a 17th-century marble reliquary bust of San Carlo Borromeo, and on the ceiling, tondi with the four Evangelists.

The painting is to be a centrepiece of the forthcoming exhibition at Palazzo Strozzi, the Cinquecento in Florence, which is due to run from September 21 2017 to January 21, 2018. In considering it for the show, and in the course of a regular inspection of the chapel, it became apparent that restoration was necessary. 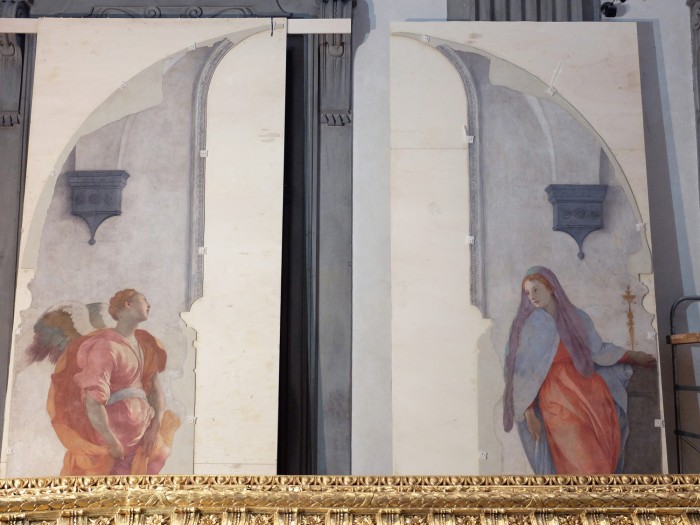 Detached frescoes (and frame) in restoration area inside the church, July 2017

Daniele Rapino is the official of the Soprintendenza responsible for the Santo Spirito area. He points out that “the two detached frescoes were clearly coming away from their wall support and their brass screws were no longer fastening them to the wall.” As for the altarpiece, a few cracks are apparent, and paint is lifting in some areas adjacent to these. 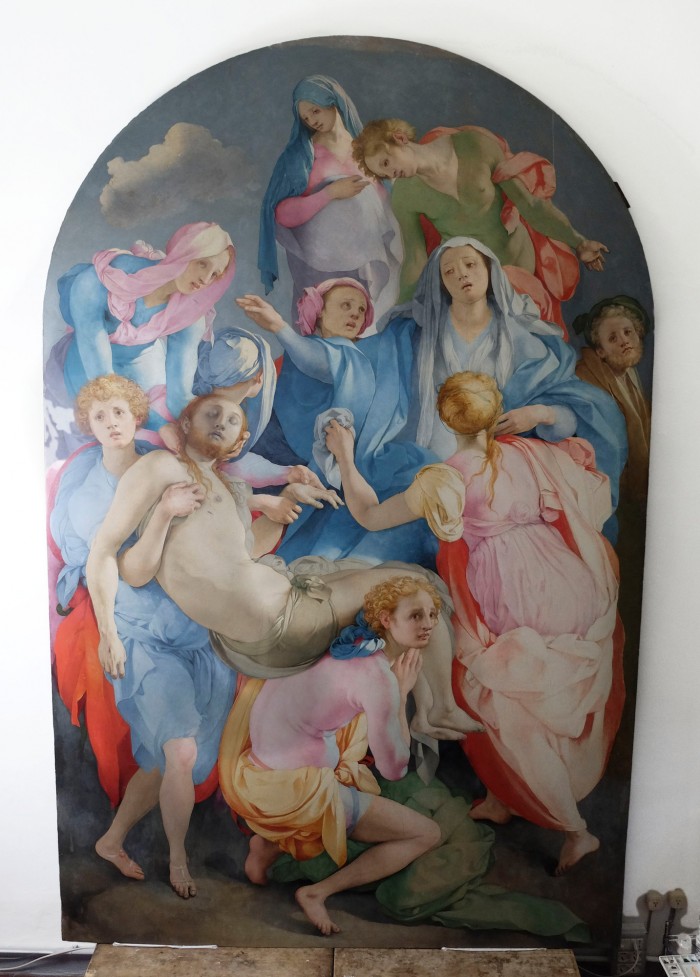 The panel in late July 2017 – restoration is almost finished but there were still a few things to do, including a final coat of varnish.

“The picture is also spoilt both by inconsistent oxidisation of the varnish that has built up over the years and by excessive repainting in the course of previous restorations. The frame and panel are riddled with holes caused by woodworm.” Restoration began on February 27, 2017, and when I saw it in late July it lacked only some finishing touches, since it was to be transported to Palazzo Strozzi in early September. 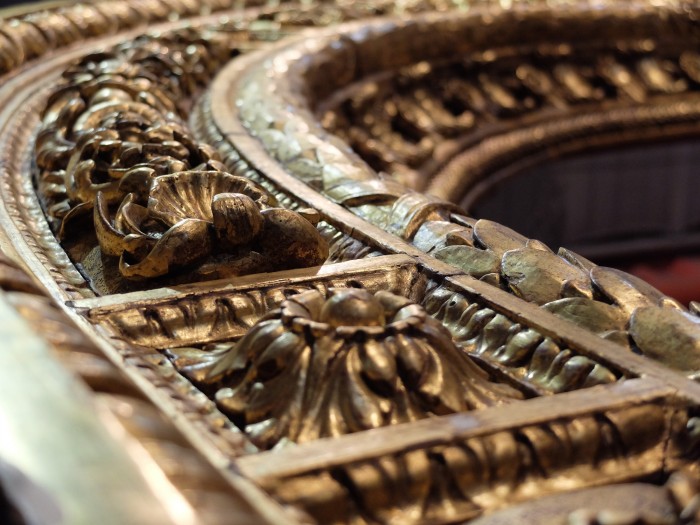 Detail of frame during restoration

As with most restorations, much of the trouble comes from previous interventions, which might only rightly be called “restoration” in the past 60 years or so. Being considered one of the most important Mannerist paintings, the Deposition by Pontormo has always been in the limelight, and hence has been restored often – every 100 years or so: 1620, 1725-8, 1820-25, 1936 and again in 1978. The ’78 intervention was a simple disinfestation of woodworms and light surface varnish cleaning, so almost 100 years has gone by since the last more important intervention. 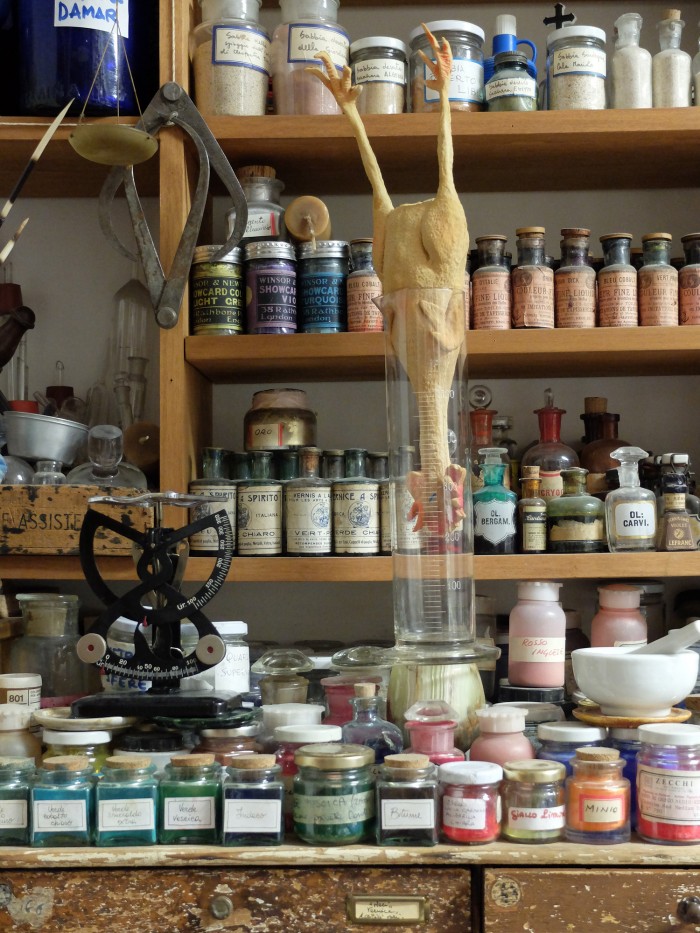 Detail of the peculiar restoration studio of Daniele Rossi!

When you go visit a restoration studio, you always hope the restorer is going to reveal something huge, like a hidden head that gives new meaning to a painting you’ve studied. Nothing of the sort has happened here – being so famous, it would be pretty impossible to discover that massive. Rather, this restoration gives us further hints into Pontormo’s working processes and debunks at least one myth, that of the scene being set in a flat, neutral space. Let’s look at a few key points.

Paint. Perhaps the biggest discovery is that this painting is not an oil on panel but a tempera. This technique was totally out of vogue when Pontormo painted it – tempera wasn’t used much beyond the Quattrocento. So why did he use it? Daniele Rapino hypothesizes that “he takes it up, probably, we think, because it would have been easier for him to put it in rapport with the frescoes.” 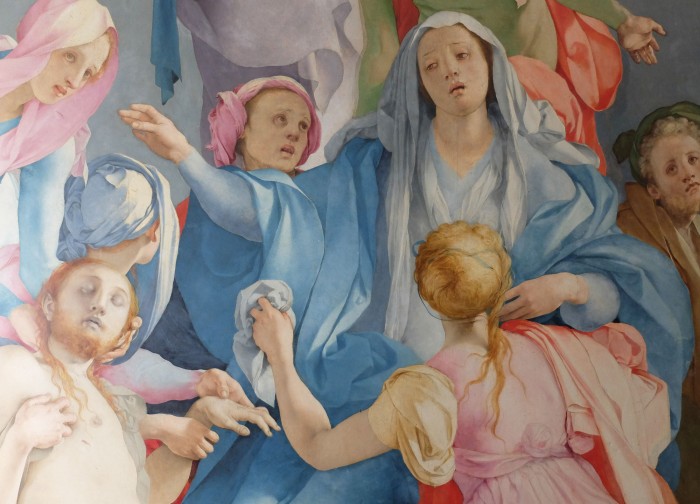 The central area of the painting

Borders. No traces of spolvero (pouncing through holes in the cartoon) were found, while the artist seems to have favoured tracing clear lines. The linear dominates also in the way that he highlights borders (of limbs, fabrics, etc.) with a slightly darker colour paint to make them pop. 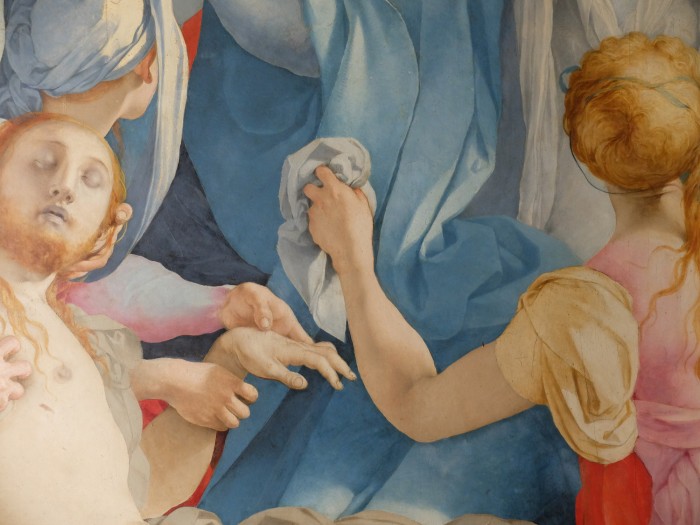 Colour. You’d expect tempera to produce flatter colours than oil, but that isn’t the case here. A few interesting things can be said about the colour here. The first is that they were not intended to be this light – indeed they seem a bit pastel, but they weren’t like that when Pontormo painted it – they would have been deeper and darker. Second, the colours have naturally mutated over time. There’s an orangey-red that the restorers know are atypical of the artist, whose red had certainly more blue in it. Finally, the careful cleaning has pulled out a greater range of colours, which is particularly visible in the blues. You see this in the Virgin Mary’s veil, which reveals five, perhaps six different tonalities of the same pigment. And also in the sky, which used to look greyish-green, and actually is blue, with a lovely little cloud in it.

Modeling. The harsh cleaning methods, likely those used in the 18th century, removed a top layer of paint, taking away some details (such as in the shading of the foot at the bottom center of the composition) and some colour. 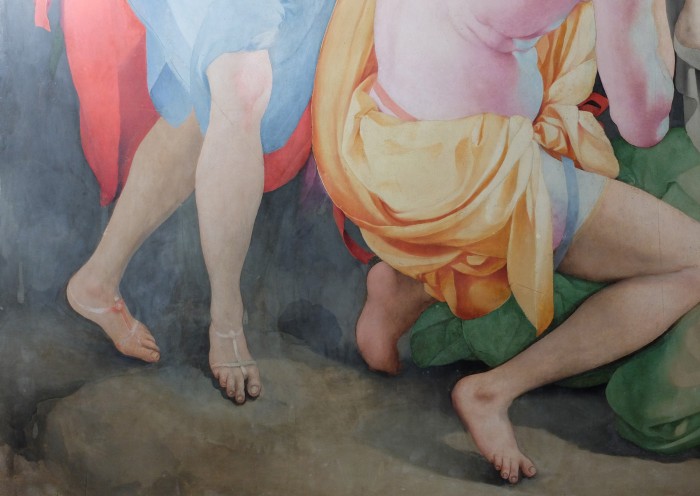 Shadows. Scholars always said this was a painting without shadows. Now if you look in the bottom left corner, you can clearly see the ground covered in pebbles, and those pebbles have shadows. Rapino explains:

“It seemed like this scene was suspended in nothingness. Studies speak of a neutral background. But that’s not at all true! There’s a sky. There’s earth. Contrary to what people thought, but it’s not their fault: you couldn’t see it.” 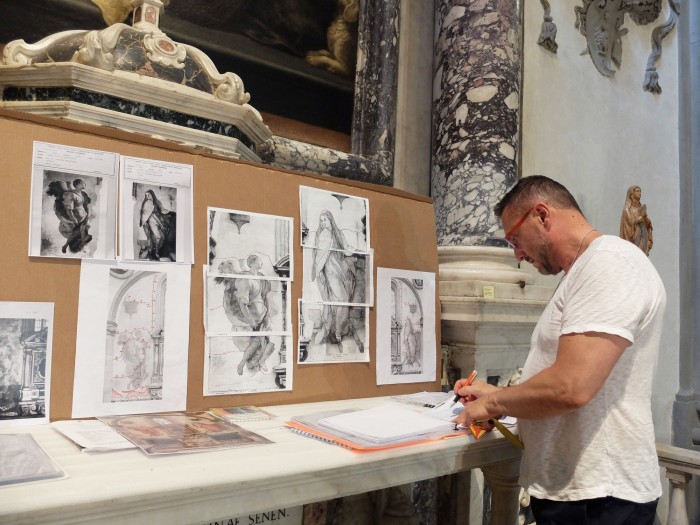 The restorer at work

In this conversation, restorer Daniele Rossi has taken to the background, as restorers are trained to do – they exalt the work of others, and seldom brag of their achievements, no matter how great. I asked him how he felt, laying hand and brush to Pontormo. “Working on masterpieces like this is always a discovery and an emotional process. There’s a direct rapport between the work and its restorer. It takes time, silence, where one is alone in order to make important decisions.” Rossi has restored other Pontormo’s before, and continues: “Over the years, one Pontormo after the other, it’s always like taking up a conversation we’ve left off.”