Here is an itinerary that will take you away from the hoardes of tourists in downtown Florence, and out to the near suburbs, near to where I live. While the historical center of Florence has the greatest concentration of historical monuments (logically), monasteries and churches were often placed away from the city, in areas that have now been mostly engulfed by residential buildings.

This is the case with the 16th century Vallombrosian monastery of San Salvi, a community with earlier medieval roots but a late renaissance rebuilding campaign. You’ll see an important fresco at San Salvi, a local market, a nice shopping street and a good bar before heading back downtown on foot.

Start out your day in the cool of the morning. Take the Bus #20 from Piazza San Marco and get off at the stop called “De Amicis”. Walk in one block to via san Salvi, turn right. This street is lined on one side with nice low 19th century homes, and on the left side are institutions – the monastery, a park, an elementary school, and a medical center. About halfway down the street you’ll find the gate to enter the courtyard at San Salvi (#16), with a fragrant magnolia tree in the middle. 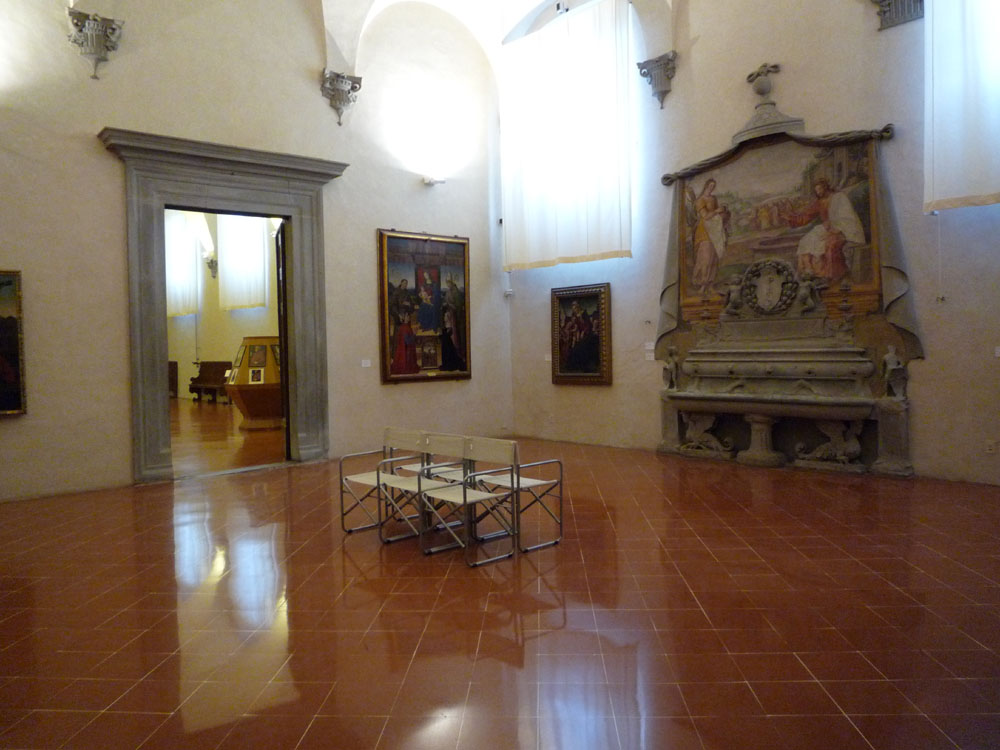 where monks wash their hands before going into the refectory

The museum of the cenacolo di San Salvi is FREE to enter. The masterpiece it houses is a last supper fresco by Andrea del Sarto (1519-27). There are four large spaces to visit. First a large hall with large religious masterpieces of the 16th century.

To the right of this space, there are three contiguous rooms. The monks’ kitchen has a huge fireplace; the washing room features a contemporary hand washing station and fresco; and the refectory is at the end of this process. Hung on the walls of these rooms are paintings of rather good quality by contemporaries of Andrea del Sarto, including Franciabigio and Pontormo.

Take the time to sit quietly and just hang out with the Last Supper by Andrea del Sarto. It’s rare that you get a masterpiece to yourself. It’s a nice place to meditate – which is just what the monks thought too. Last Supper paintings are the traditional iconography for refectories (dining halls). Tables lined the walls in a U-shape, with the prior (head monk) at the head table in the center, under Christ. Monks didn’t talk at the dinner table; they listened to a reading and gazed at this painting.

In any other town, this would be a major museum, but since we’re in Florence, it’s relatively neglected, and I was the only visitor there.  I was really impressed by this peaceful and monumental space and I enjoyed the feeling of discovery doing this alone. 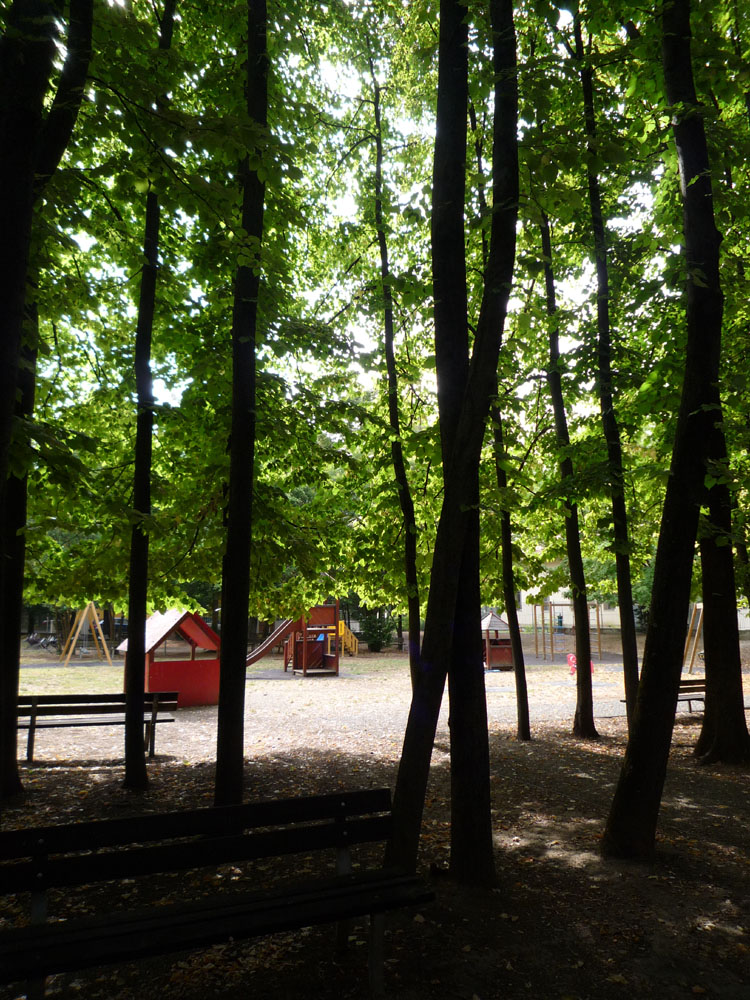 Once you’re done with the museum, exit and head towards the train tracks at the end of that street, along the wall that will be on your left. There is a small, shady park (giardino del cenacolo) with a childrens’ playground here. Continue along the tracks to the right at the end of the street, and you’ll end up underneath a bridge. 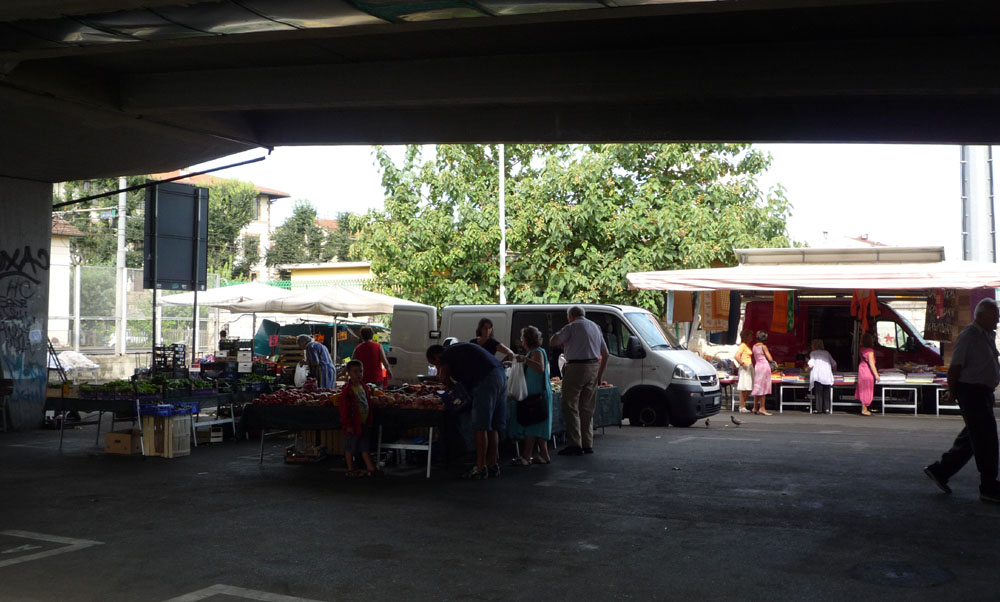 The san salvi local market is held here on weekday and saturday mornings with cheap produce, home linens and other stuff. It looks like a creepy area because it’s under a bridge, but it’s perfectly fine. On the other side of the bridge you hit via Aretina on your left; if you choose this little detour you will be rewarded by seeing, about halfway down, by a Quattrocento wall tabernacle by Lorenzo di Bicci that the monks of San Salvi commissioned. This painting is known as the Maesta’ di via Aretina but also called the “Madonnone”, ie the big Madonna.

Now we’ll walk over to via Gioberti (at the right side of the underpass) for some shopping and a bar break. Take the pedestrian underpass on your left and find via Gioberti (see map). This is an upscale and very Florentine shopping street. In the winter, it is closed off from traffic for Christmas shopping! Enjoy window shopping here. At the far end of the street you’ll see Piazza Beccaria, with its medieval gate in the center. On the right hand side of the road, just three buildings in from the gate, I highly recommend the pastries at Cafe’ Serafini.

If you continue across the viali (large street) underneath the porta Beccaria, you’ll be on Borgo la Croce, which will take you to the Sant’Ambrogio market and straight back downtown.
View Larger Map