The church of Santa Croce in Florence – art and history 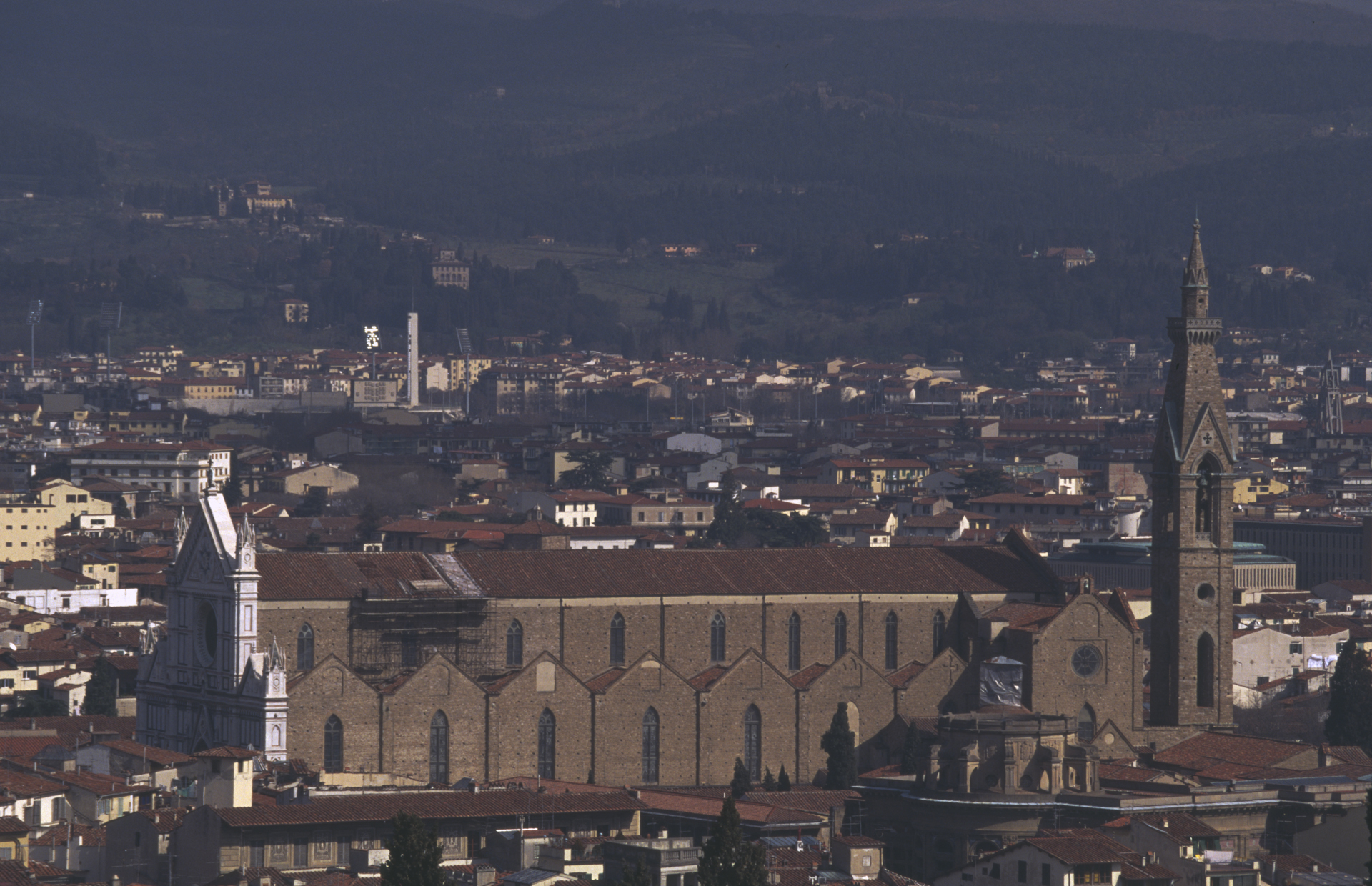 History of the Franciscan order

The order of the Franciscans was founded by St. Francis (1181-1226, canonized 1228). Francis was a rich merchant’s son who had a wanton teenage-hood but then had a vision that lead him to a religious life. He believed in a more loving and forgiving God than that characteristic of the previous century. During his lifetime Francis established a group of followers called the Franciscans, who became a mendicant order of friars – mendicant means that they interact with people (and preach) on a regular basis. They can be recognized by the brown robes that they wear, that were designed by Francis himself; these robes are in the shape of a cross and are tied at the waist with a cream coloured rope that has three knots on it to represent poverty, charity and obedience. Franciscans take vows of poverty. Originally, they begged for food, money and everyday needs.

Franciscans in Florence and the Church of Santa Croce

During Francis’ lifetime there were already Franciscans in the city of Florence. They set up just outside the city walls as there was not any space in the city. This happened to be the poorest section of town, which was convenient for two of their purposes: helping the poor and preaching to the people. They built a small oratory on the site of the present church, and the piazza in front was a field in which people would gather to hear them preach. The oratory was small and simple, thus it reflected their ideals of poverty and simple life.

As the friars gained in popularity, they often enlarged the oratory. Soon, they were faced with a dilemma. They needed a larger space if they were to continue preaching, but they were not supposed to have money or property. Were they to follow Francis’ example of prayer, or take on the more public aspect of preaching? The order then divided into two groups. The Conventuals wanted to focus on the public aspect of preaching, but this required the use of property. The Spirituals believed they should stay poor and not own property. The Conventuals eventually won the argument and they began the construction of a new church in 1295, which was probably by the builder arnolfo di cambio (to whose name we also can link the Duomo). By 1320, church was functional.

Art Historical Notes on the Church and its Frescoes 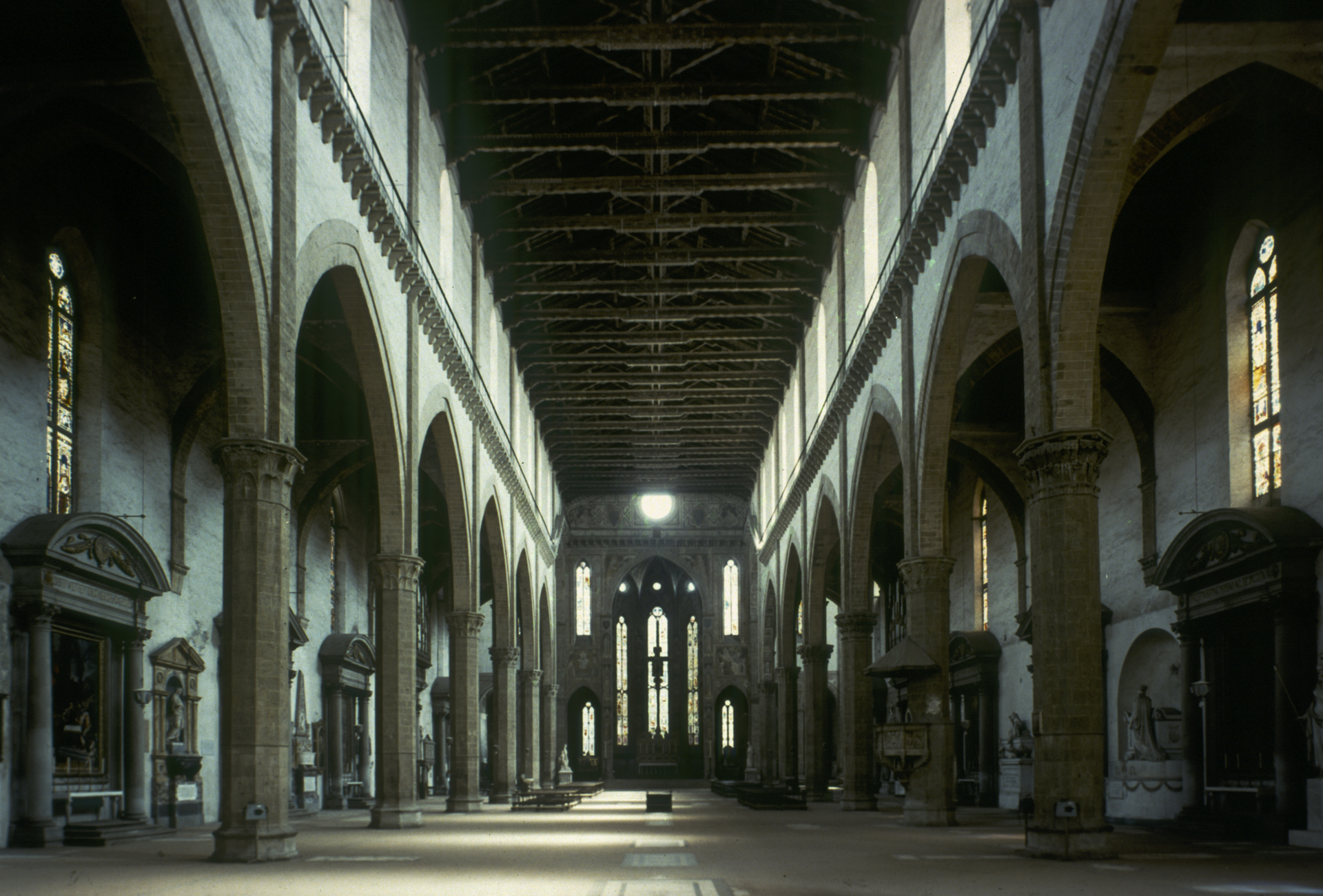 Much of this building was white-washed by Vasari in the early sixteenth century, when the church’s gothic style was no longer in fashion. Vasari started the so-called “pantheon of florentine greats” that so many tourists come to this church to admire. The structure and the original decorations are in the Gothic style, and the part I like best are the frescoes by Giotto.

Bardi and Peruzzi Chapels by Giotto

Giotto painted the Bardi and Peruzzi chapels in the early 1300’s. He was commissioned to do so by two of the wealthiest families in Florence, who were both involved in banking. These spaces functioned as private burial chapels. The Bardi chapel is the best known. It’s located just to the right of the high altar, being one of the most prestigious locations in the church. The chapel is dedicated to Saint Francis and shows episodes from his life, narrated in fresco by Giotto sometime probably around 1317-20. The frescoes were covered over and forgotten by the 19th century, so they were damaged by some later additions. Recent restoration has tried to recuperate as much of the original giotto paint as possible. The scenes on the wall read left to right and criss-cross across the space.

Giotto’s style is different from that of his predecessors. His stories and figures should feel more accessible to us than the art of the 13th century, which is characterized by a “Byzantine feel“. Giotto’s spaces are more realistic and his people are more solid and three-dimensional. He didn’t yet know “scientific perspective”, which wasn’t invented yet, but he intuited a more accurate way to depict space. So, for example, the “Apparition at Arles” (middle level of the left wall) shows us a clear foreground, midground and background. You can see that St. Francis is in the very center of this space, and those friars at the front with their backs to us, well, they are definately in front of him. Those friars are really heavy looking, kinda rounded. This the artist achieves through talented handling of white paint, which he uses for highlighting and modeling the figures’ robes. The other innovation in these paintings is the realistic depiction of emotion, which we can see best in the scene of the “Funeral of Saint Francis”. The people here really are reacting to their leader’s death. We can guess what they might be thinking or saying through their gestures, like the friar with his hands thrown up. 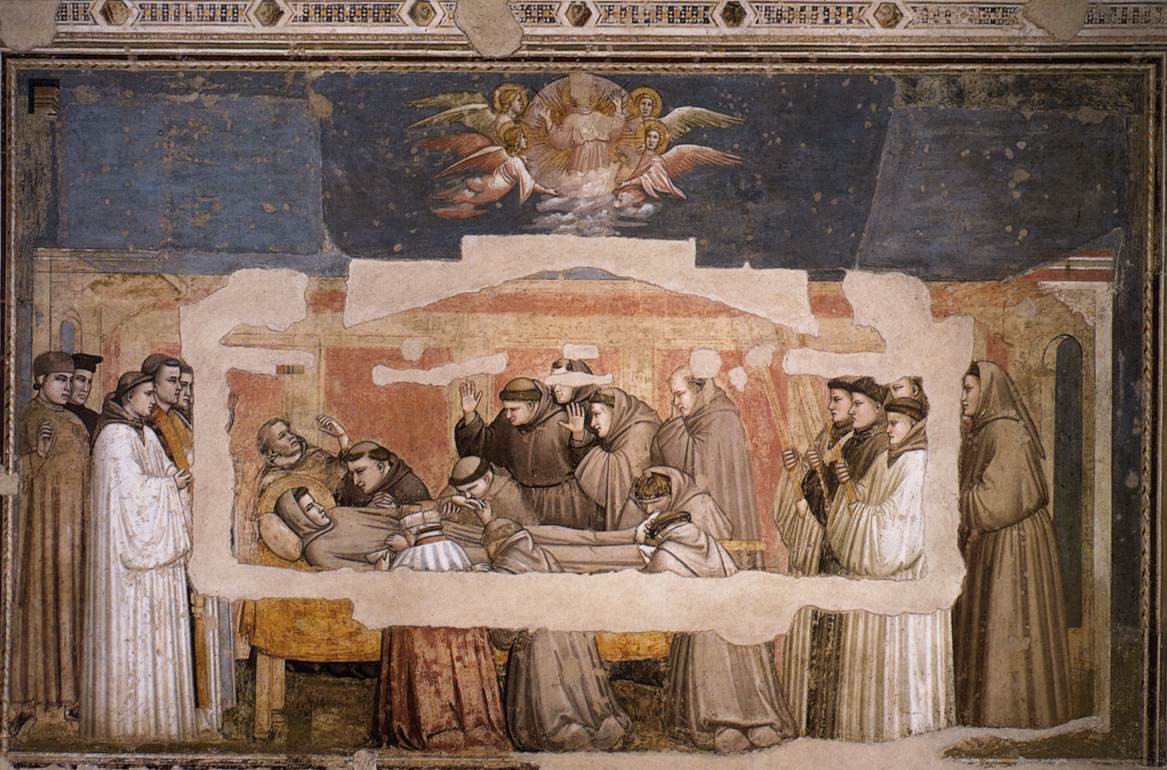 Numerous other works in the church were added after Giotto’s departure. Taddeo Gaddi, a major Giotto
follower, painted the jewel-toned Baroncelli chapel (right apse chapel) in the 1330’s in a style that is different from Giotto’s, more what we call “international gothic“. Also of note, from the 1360’s, is the Rinuncini chapel which can be seen in the sacresty. In the nave, my personal favourite is a sculpted “Annunciation” by Donatello. Above the scene of Gabriel and Mary, there are small terracotta “putti” reacting to the scene below. 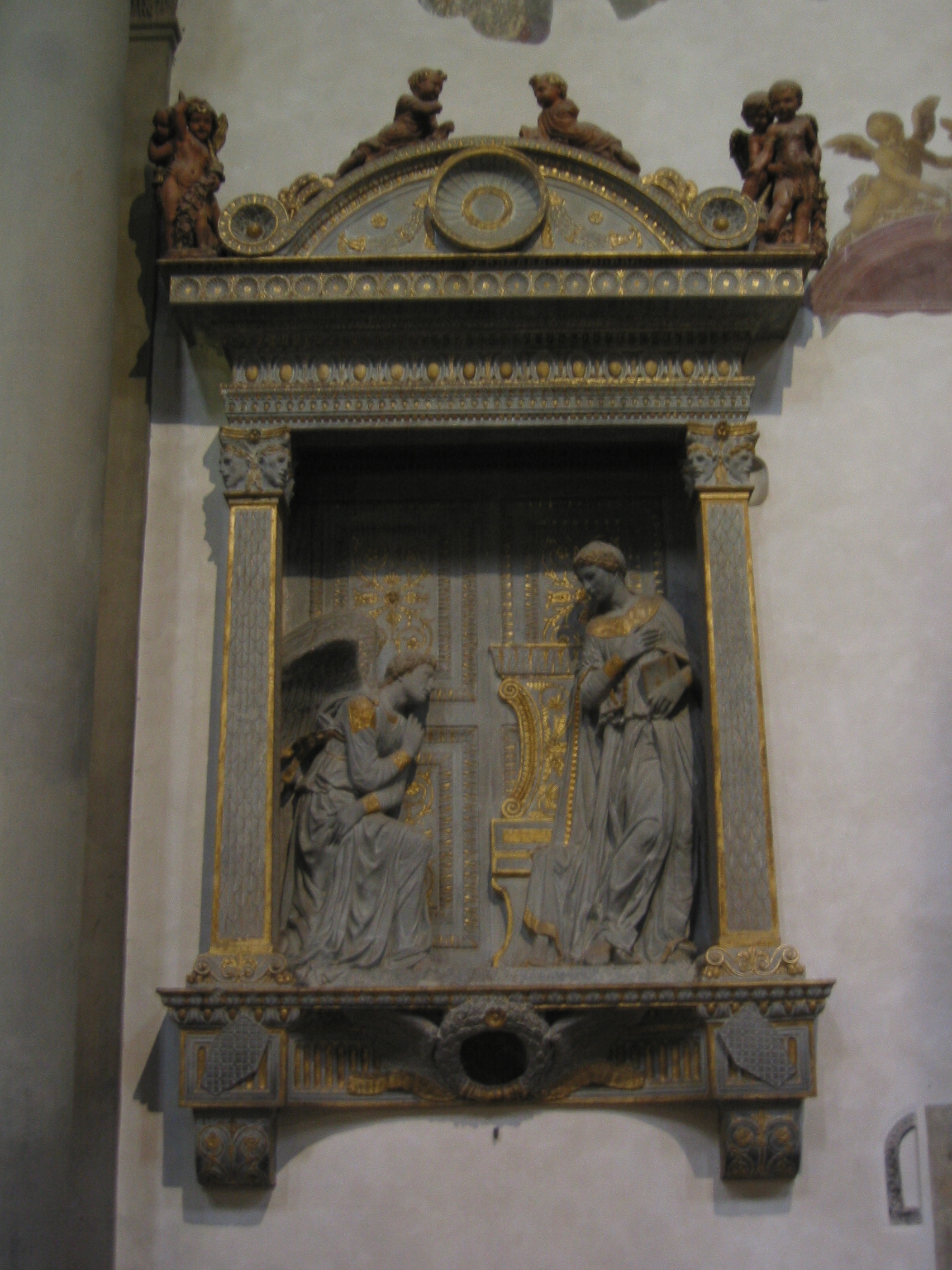 Following the trail outside the door in the right hand of the nave, you’ll be out in the first cloister. Down the stairs on the left is the Pazzi Chapel, designed by the great Renaissance architect, Brunelleschi. This intricately planned space is all about circles and squares — go in there and try to figure out what I mean! Also worth mentioning is the small museum accessible from the cloister (on the left facing the exit), in which are preserved some detached frescoes and sinopie (underdrawings). There is also the friars’ refectory with an important “tree of life” cycle (By Taddeo Gaddi, a follower of Giotto) accessible from the cloister, and a statue by Donatello originally intended for Orsanmichele, St. Louis of Toulouse, is also here in its original. Notice he only has one arm, since Donatello cheated on his bronze casting technique!