Did you know that the Church of Santo Spirito has a beautiful cloister? I’d never seen it until the other day, as it’s now open regularly to the public. While the visit to the church remains free, there is now the possibility to visit the previously closed monastic spaces of the cloister and refectory, as well as the sacristy containing Michelangelo’s Crucifix with a small ticket. Just when you think you’ve seen everything in this city, something else like this pops up, and it’s always a pleasure to be able to photograph and report on it! 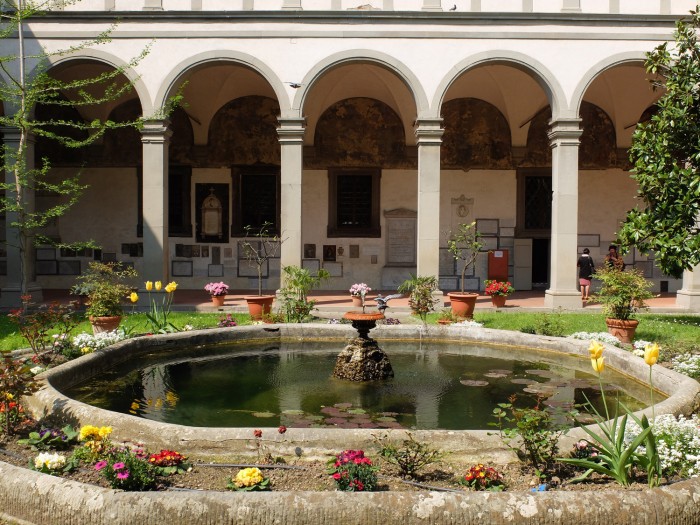 The cloister is complete with a charming fountain and lily pads!

The complex of Santo Spirito was founded by the Augustinians in the second half of the 13th century and quickly became a prestigious center of religion and politics in the city. The plans for the church by Brunelleschi date to the 1460s, while the monastery was renovated and enlarged based on a project by Bartolomeo Ammannati in the late 16th-early 17th century. 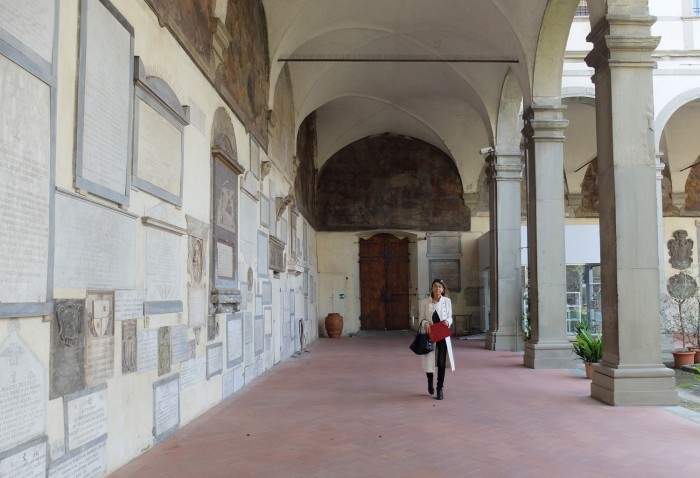 View of the cloister

The cloister is accessed through a door to the left of the church facade, where a booth and small bookshop have been set up. It dates to 1620 and is by the architects Giulio Parigi and Alfonso Parigi il Giovane. The cloister itself is worth the price of entry – if you’re in search of a calm and quiet place to sit on a bench and read a book, I’d seriously consider coming here (also, there’s a bathroom!). Rounded arches give on to a small garden in the center, complete with pond, fountain, and lily pads. 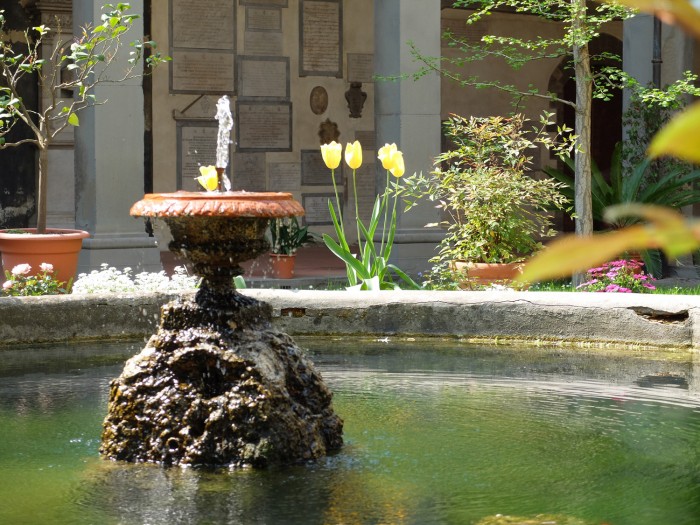 Lining the walls of the cloister are numerous interesting tombstones, some clearly dating to the monastery’s original construction, with weather-worn family crests and inscriptions in Gothic lettering. In fact, it’s called the chiostro dei morti (of the dead) for this reason. 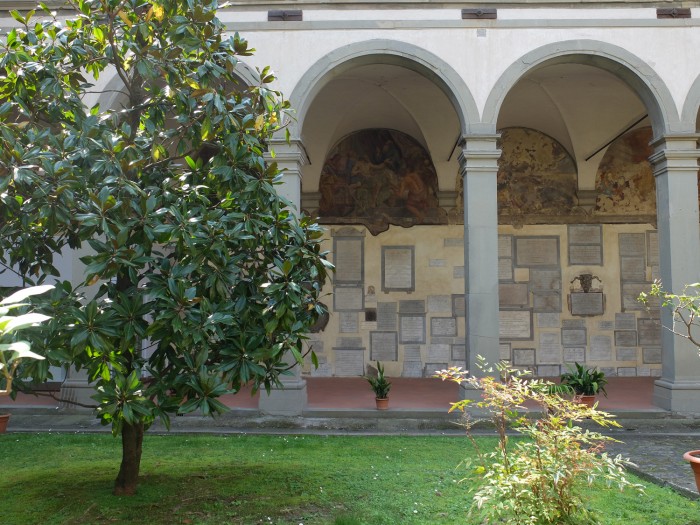 Some of the wall tombs

Above, in the lunettes, are frescoes depicting the life of Saint Augustine, from the early 17th century. These were much damaged over time, and even more so in the late 19th century between some additions or changes to the building, some water damage and even an earthquake! A restoration process in the 1970s removed the most damaged ones from the walls and attached them to a support before putting them back in their original locations. Artistically, they are not of great note. 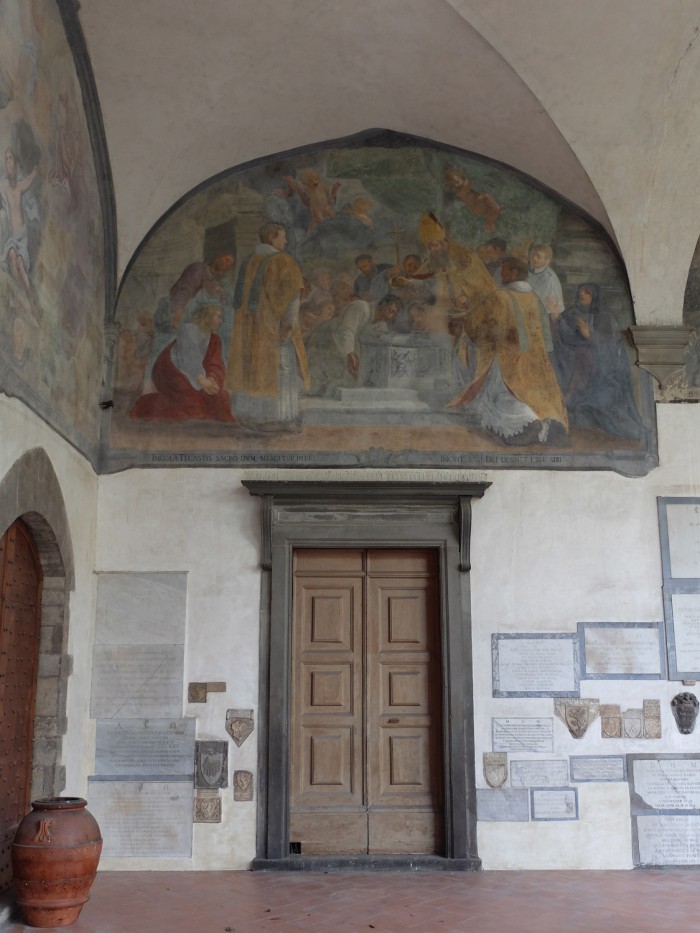 Looking through the arches of the cloister, one also gets a clear view of the church’s cupola and bell tower. 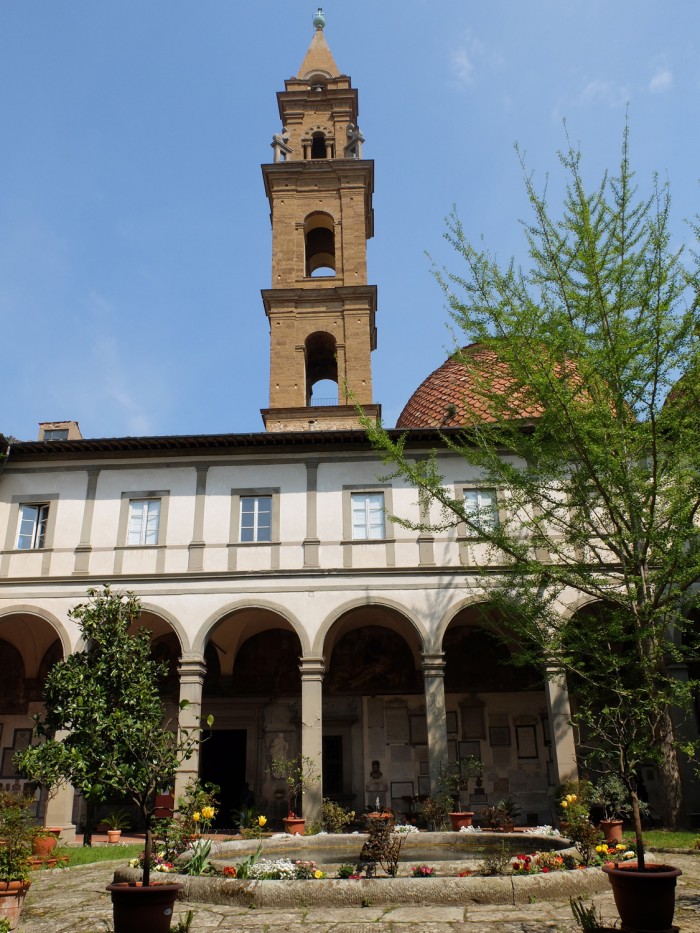 An unusual viewpoint onto the Church of Santo Spirito

As is typical of monastic structures, the cloister was a connection between the various areas that the monks needed to use during their day, for prayer, discussion, meditation and eating. The refectory at Santo Spirito is home to a marvelous Last Supper by Bernardo Poccetti, painted in 1597. The large end wall of this room measures 70 square meters and actually shows three dinner scenes, not just one. Unfortunately, the room as we now see it is just a narrow strip created to conserve the fresco as part of the monastery, while the adjacent space divided by a wall belongs to someone else (I believe the Carabinieri). Hence it’s rather difficult to photograph, as well as to observe in its full glory. 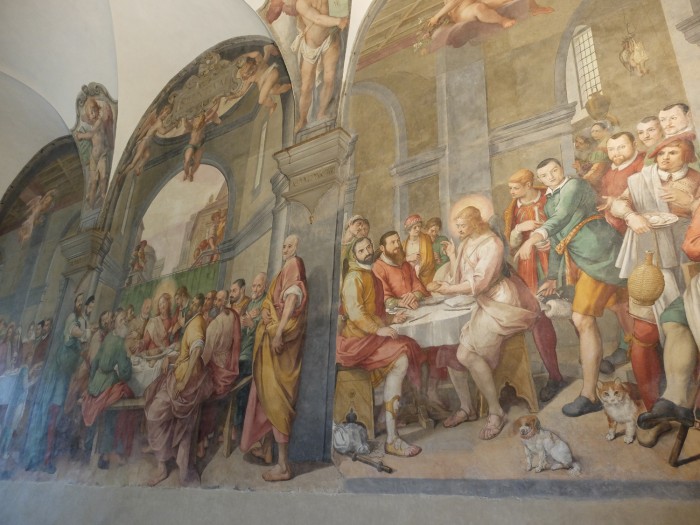 Best possible view of this fresco :)

The three scenes, divided naturally by the room’s architecture, show The marriage at Cana, the Last Supper, and the Dinner at Emmaus. Figures in the foreground seem almost to move seamlessly through these three spaces, like waiters between different spaces of a restaurant. A four-year-long restoration that ended in 2013 has brought to light the brilliant colours and execution of this fine late 16th-century work. 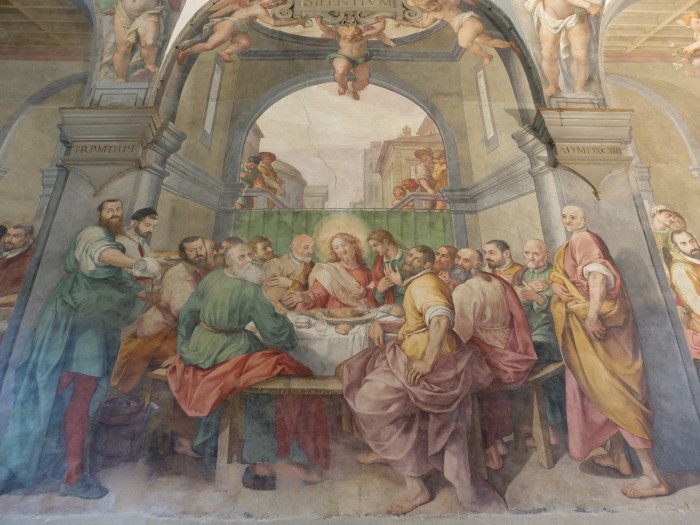 Another room that one can access off the cloister is what I thought was a chapter house because it’s square and lined with benches, but it’s actually the “Refettorio Nuovo” or new refectory, part of the Ammannati expansion. This rooms seems to be mainly used for small meetings, though Don Giuseppe, Santo Spirito’s energetic priest, says he’d like to open it up every night for concerts. 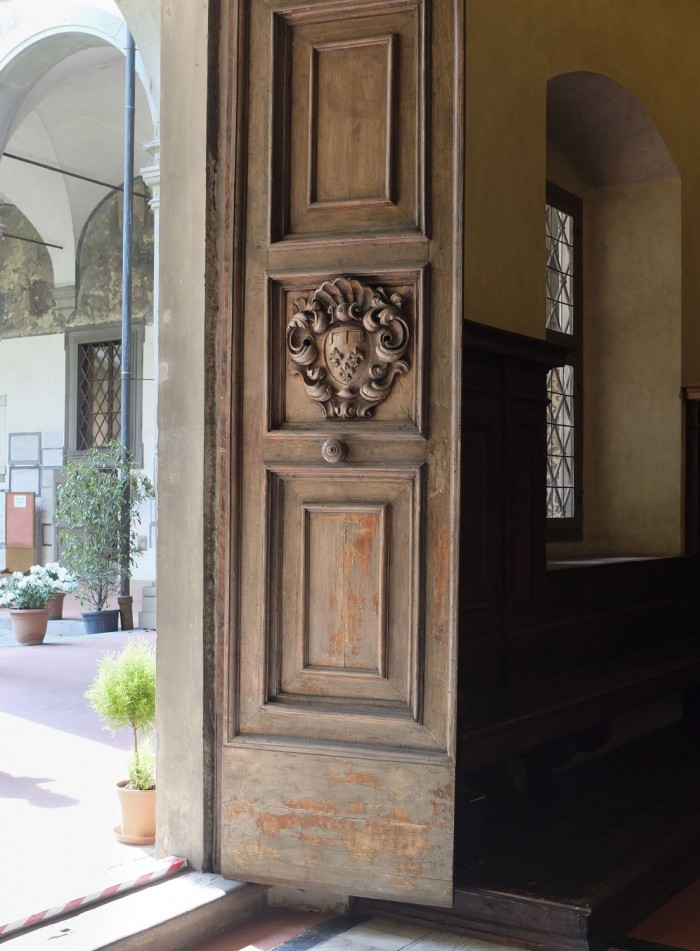 Doorway to the new refectory

The sacristy by Renaissance architect Giuliano da Sangallo, which was previously freely accessible from the nave of the church, is now open for visits through the cloister entrance. It features the almost life-sized Crucifix attributed to the young Michelangelo which has recently been hung in the center of the room, thanks to a donation by the American non-profit Friends of Florence (see this article). 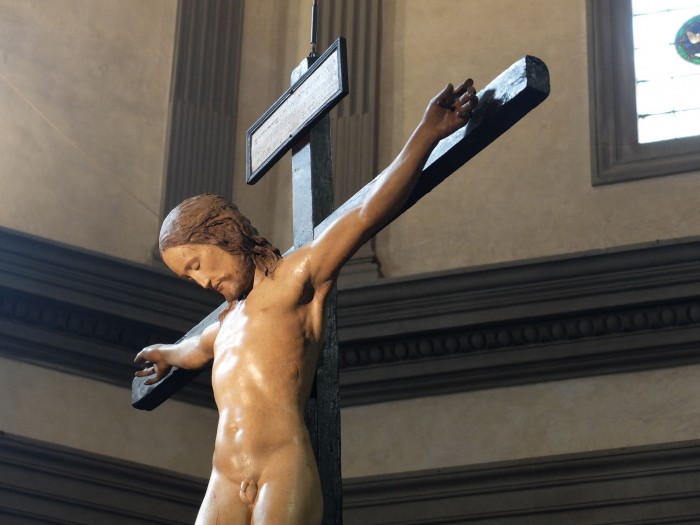