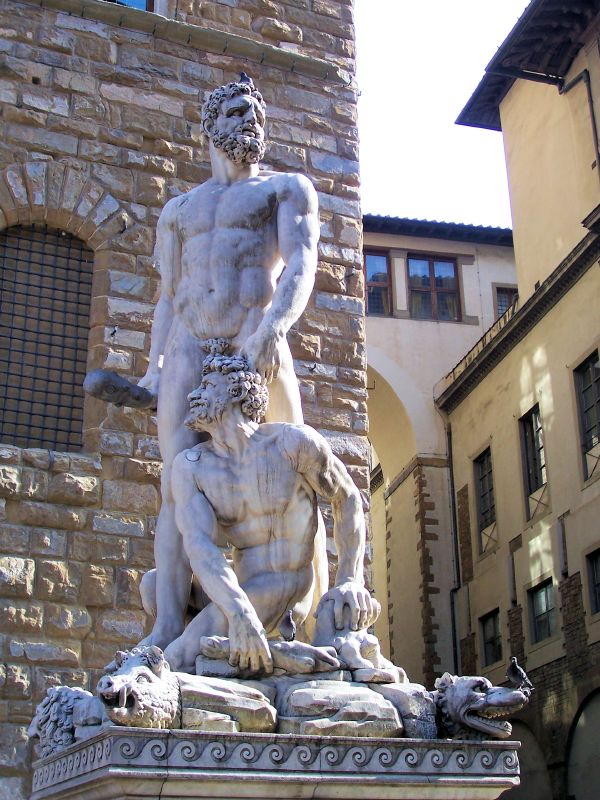 This is the contest winner in the Student category. Garret won a copy of The Food Lover’s Guide to Florence so that he can get in a good meal every once and a while!

Hello, my name is Garret Tufte. I recently came to Florence to study creative writing, and, having graduated from the University of Kansas, I now spend my time wandering through the city, gazing in awe upon wine, women, music, and art in the open air. This is my creative impression of Piazza della Signoria and its Dueling Statues.

I have spent significant time in Piazza della Signoria, nights and days, hearing street musicians between there and the Uffizi, the bottleneck at the corners of Palazzo Vecchio and the Loggia dei Lanzi sculpture garden. I hope for the violinist playing his popular classical pieces, or the solo guitarist, seated, plucking his own brand of laid-back, adult-contemporary instrumental. I should also mention the singer/songwriter cover artist, crooning Bob Dylan and Kris Kristofferson, though the less said, the better.

I stroll through the sculptures in the loggia, absorbing priceless works. Funny how glorious wonder works; put oneself in the right frame of mind, regardless of stress, pain or sadness, turn the switch to “see” and these great statues make one’s mind their own. That is, the artist labors tirelessly for years with the same image, emotion, theme, and style. If he does it right (and there is no quantifiable way to tell one way or the other), the magic happens. This inanimate piece gains a voice of its own, greater than the artist himself. And it speaks. The art, the subject. Our minds, the object. Translation-less transference, the act. Solo violin Vivaldi’s “Summer”, an encouraging frame. A straining “Bridge Over Troubled Waters”, a sour hindrance.

These masterpieces encircle the viewer (yes, even in a rectangular loggia) and battle for attention. Yet always something calls from just beyond the rail. A wide-stepped walkway, flanked unselfconsciously with rectangular-potted shrubbery, leads from the piazza to the main entrance of the Palazzo Vecchio. Look left, look right, and one sees pedestals. Look up: there be colossi, two guards and a simpering victim beneath one.

Michelangelo’s David stands at ease, draped by his sling (apparently, he is quite tense, but to be honest, I do not see it). One knee bent, muscles tight and fit. He is so relaxed, yet strong, judicious and notably aware of his presence. He does not seem to notice Michelangelo sculpting him.

Then, to his left, to our right, two brutes of vulgar musculature, curly-haired and bearded. Virtually indistinguishable body types with creases like valleys, their facial wrinkles and muscle strands. Cartoon-ish, steroid-injected statues. The slightly larger of the two stands, grasping the crouched one by the hair, pulling the face of his victim towards his crotch, club in hand.

There is a story here; I consider it. A male rape. Then a murder. But a club in the crouched one’s hand? Perhaps it is a consensual thing; they occasionally like to throw a bit of pain in there. But such a heavy brow, such deep eyes; he casts them toward something in the distance. This standing brute expresses a fearful resolve. The crouched one begs in torment. These fearful expressions. What is the subject?

Perhaps it is for protection that they crouch and hair-tug. One stands strong. Perhaps an older brother. A compatriot in war. So close in battle; in the trenches they are. A deep friendship or something more. But with clubs. And nude. This is surely the ancient world. Perhaps it is of the Greeks. Or Old Testament, just after the Garden of Eden. Who were those brothers – Cain, Abel, Seth? One of them to killed another, I believe. That’s the war, perhaps. That’s the fear; that’s the proximity. They stand on scorched earth, a rock, a tree stump; in exodus. They grip tightly, flexing. Just for show? Or with adrenaline?

I have since learned that this piece is Baccio Bandinelli’s “Hercules and Cacus”. I am certainly not a scholar, but I can hardly see any indication of that specific subject. Not that this is a failing, but really, Cacus is supposed to be a fire-breathing monster.

It is quite enthralling, an intricately-styled masterwork. But, it is grotesque alongside the David.

The David, with his lucid pose and physicality. Though a mere replica, technically, there is no comparison. And yet, there they stand, protecting the palazzo. The hulking brutes serve the purpose quite well, but the David does not belong. He should not be relegated to “guard duty”. And certainly not in the company, and at the same rank, as those beasts.

I see an obvious disparity between these two statues. I know I am stepping outside my bounds, but I would like to make a proposition. The David does not belong opposite the other intriguing, but flawed, piece. He should be moved parallel with the palace wall five meters further from the palazzo entrance, to the north, closer to Donatello’s “Judith and Holofernes”. Hercules is fine where he is, captain of the gate, but David needs his separation. In addition, the potted shrubbery could then angle more moderately, widening the walkway. To put it simply, Michelangelo’s masterpiece should never stand on equal ground. Another pedestal is needed, in the form of space.

And while we’re at it, have that beatnik with the guitar quit singing Simon and Garfunkel.

Disagree? Check out the colossi (and the music) in from of the Piazza Signoriaat any time of day or night, and post your comments here – let’s fight it out!