100 days to admire the Tavola Doria

The Tavola Doria is the oldest known representation of the lost fresco of the Battle of Anghiari by Leonardo da Vinci, and it has been returned to Florence for the first time since its illegal removal from the country some time after or around 1940. It ended up in Tokyo at the Fuji art museum, which has agreed to return the work. This exhibition, from March 25 to June 29, 2014, is part of an Italian tournée; the work will return to Japan for four more years before being re-transferred to the Uffizi. 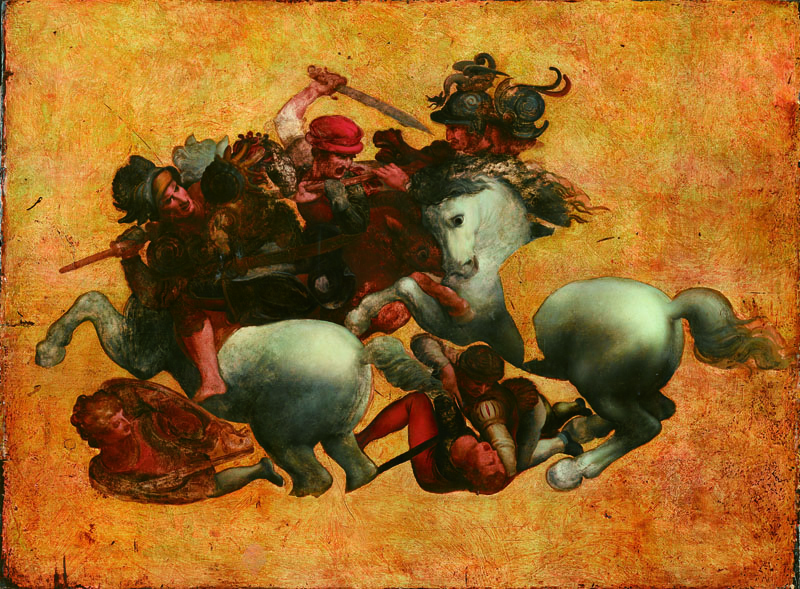 The Tokyo Fuji Art Museum has agreed to “donate” the work to the Uffizi Museum after negotiations through the Comando Carabinieri Tutela Patrimonio Culturale – a military police unit whose tasks include the repatriation of works that have illegally been removed from Italy. The conditions of the contract have not been revealed or even hinted at but we can imagine that the Japanese were not happy to give up this vestige of Leonardo given their love for this artist, and so likely some good loans have been bartered. Upon entry to Italy it was shown in Rome at the Quirinale (from November 2012 to January 2013), in Anghiari and at the Biblioteca Nazionale di Firenze. In between, the famous painting has been subjected to restoration and analysis at the Fortezza da Basso laboratory of the Opificio delle Pietre Dure in Florence.

About the Tavola Doria

The Tavola Doria carries the name of the Doria family of Genova, who owned the work until the 18th century. It represents the closest known copy of a lost work by Leonardo. Leonardo da Vinci was commissioned to represent the Battle of Anghiari on a wall of the Salone dei 500 in Florence’s Palazzo Vecchio in 1503. The work was begun, but started to deteriorate immediately due to his use of experimental techniques (possibly similar to the disastrous ones used at the Last Supper in Milan). Leonardo’s work was likely visible until about 1555, when Vasari was commissioned to renovate the room, and is now lost, although there are intermittent attempts to find it behind the wall that Vasari built. 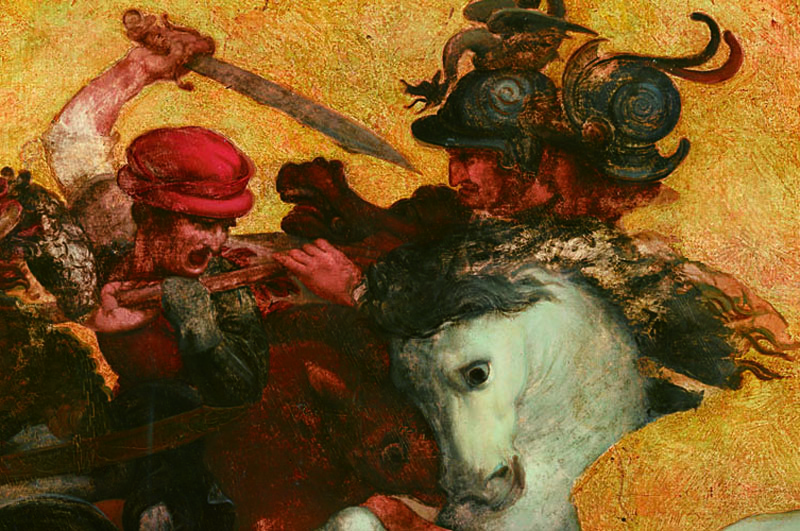 Detail of the Tavola Doria

The Tavola Doria represents the central and most finished part of Leonardo’s fresco, the fight for the Visconti standard. This episode took place on June 29 1440 at Anghiari. Milan’s Visconti Duchy fought a Florentine coalition army (composed of Florentines with Venetian and Vatican armies). At the right, we see Ludovico Scarampo Mezzarota and Pietro Giampaolo Orsini (coalition soldiers) attempting to remove the Visconti standard from the enemies on the left, Francesco e Niccolò Piccinino.

The blustery composition of horses and men is one of the most influential of its time, and many artists came to copy it in situ. Another panel by an unknown artist, of a slightly later date, is also displayed and likely represents a moment in which the original was in worse condition. 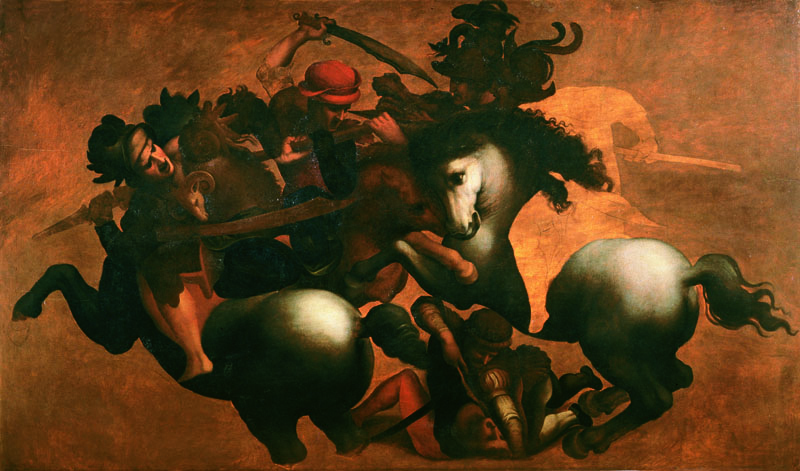 Restorer Roberto Bellucci’s analysis shows that the Tavola Doria is oil on poplar panel, and carbon dating makes it consistent with Florentine painting of the early Cinquecento. The panel has undergone interventions in the past, including one in the 1950s to attempt to stabilize the natural warping of the wood, which is particularly sensitive to climactic change. This has resulted in worsening the situation and creating even higher tension in the panel and a crack on the right side. The restorer thus applied a now-approved technique to remove this earlier stabilizing element under controlled temperature situations, fixing the crack with the insertion of tiny supports, and creating a larger frame-like support for the whole work. After a minor cleaning, the work has been put in a temperature controlled, alarmed and UV-proof box.

The show at the Uffizi

The Tavola Doria will be displayed in the Sala delle Carte Geografiche in the Uffizi, a room normally closed to the public. The room has paintings on the wall by Stefano Bonsignori that show the territories of the Granducato della Toscana, and is adjacent to the room in which the autograph paintings by Leonardo are kept. In this way it is a unique opportunity to compare the style of the work to those by Leonardo and see just how close they are.

In addition, two other works have been brought out of storage that are close copies of works by Leonardo and testimony to the importance of this artist as a teacher to an entire generation of Florentines. They show two famous Leonardo paintings, Leda and the Swan and Madonna with Saint Anne, painted by unknown 16th century artists. 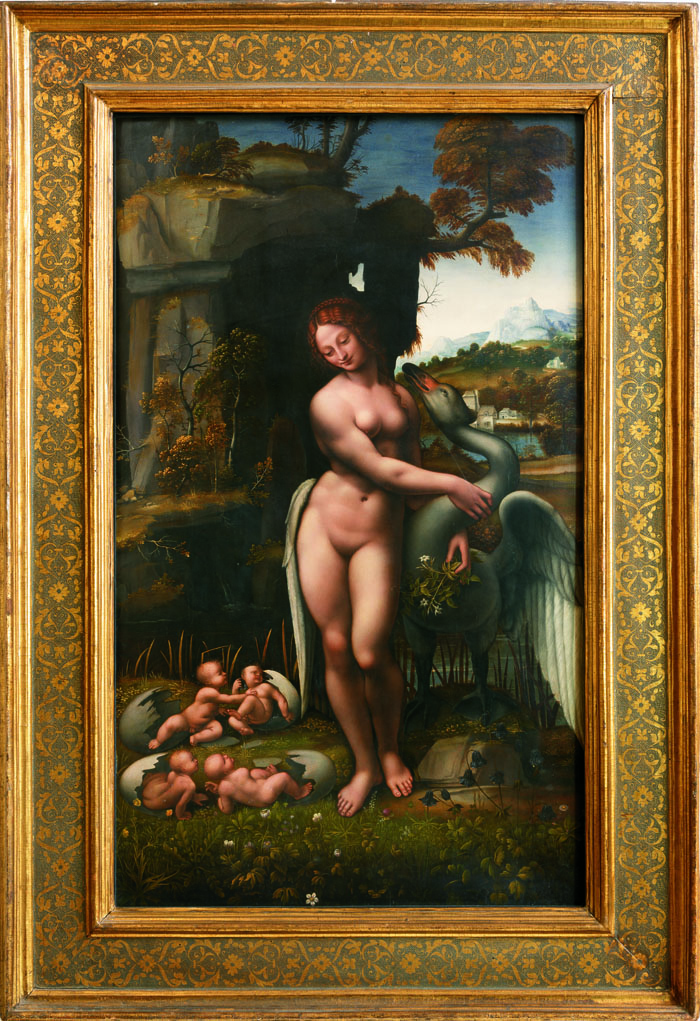 Copy after Leda and the Swan 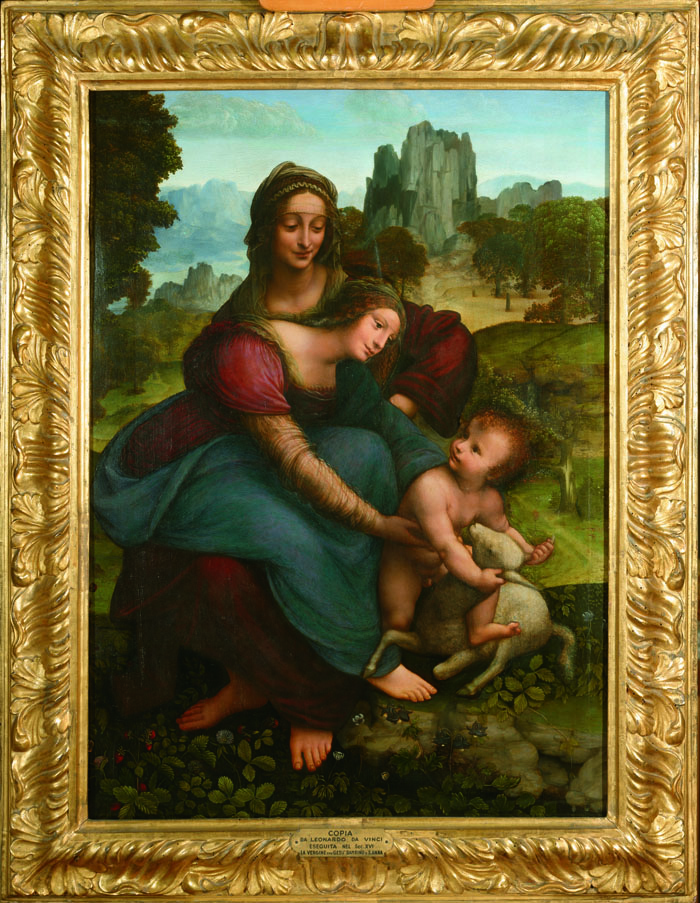 Copy after Madonna and Saint Anne