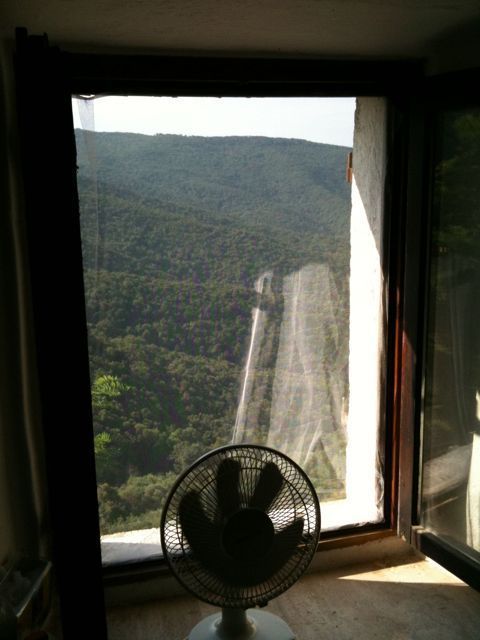 A screen and a fan: novelty in Italy in my home in Sticciano

There are few moments of the year in which Italians will talk about the weather as much as an Anglo-Saxon. Right about now is one of those moments, when the mercury (if mercury thermometres weren’t banned in the EU) rises to 40 degrees celcius and there’s nothing people can do all day except sigh and declare “che caldo”. Those days in which you cannot even think of doing anything other than sitting still, scantily dressed, in front of a fan. If Dante could so capably visualize Hell, it’s because he spent a summer in his native city. 700 years later, Italians still don’t believe in screens or air conditioning, so we just suffer (except at my house as it’s “americanized”). We locals know to expect this in the summer in Florence, but what if you’re a tourist?

If you are planning a trip to Florence, let me answer the top question I see on fora (the plural of forums that nobody uses): “what is the best time to visit Florence” or Italy or Tuscany. And second question, “what is the weather like in (insert your week here)”.

Okay, weather prediction is a fine art, and one in which I don’t have a degree. But I can tell you this much: if you’re from Texas and have opted to live without air-conditioning, by all means come on over right now and stay for August too. Otherwise, observe the generalizations below (and enjoy my rants), and check these recommended forecast websites.

Despite your image of reasonable Mediterranean weather, winter is cold here just as anywhere else. Most years it rains constantly through January and February, but sometimes this also includes December and March. This year it rained so much that rubber boots became fashionable. On the positive side of things, if you can keep your feet dry, winter is not a bad time to explore art in Florence’s museums and churches, as you’re inside, and of course there aren’t any crowds. There is little thermic difference between the churches and outside, so wear warm layers! Heating is generally not very efficient in Italian homes so we tend to wear layers also inside and just deal with the cold and humidity. The main challenge in winter is finding somewhere to hang one’s wet laundry (Italians don’t use clothes dryers).

Visiting in Spring and Fall

Spring is generally the best time to visit anywhere in Italy. Beware of March and early April: this is when European school kids go on class trips and can crowd up the museums (yeah, spoiled eh? To think we went to Ottawa…). But otherwise there are fewer crowds than in the summer, and the weather is generally good! By “good” I mean that temperatures can be in the mid 20s (celcius) in the day, with pleasantly cool nights requiring a jacket. Rain is sporadic. The month of May is generally lovely, with trees and flowers in bloom. The countryside looks very green in May. Sometimes it’s even hot enough to go to the beach, though the water is frigid.

It’s amazing how the weather gets cooler on September first, and that month is usually very nice. Crowds dissipate, especially from the seaside, so it’s a good time for some low-season beach fun. In Florence the study abroad students arrive but the tourist volume is lower. October can also be very nice, sometimes with some warm sunny days and cool evenings. Pack an umbrella, of course, in case of rain.

Summer weather in Florence and Tuscany 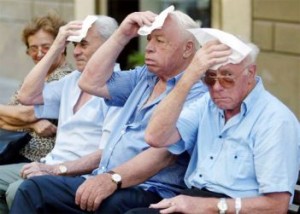 As I started to say above, it’s HOT. July and August are the key months to avoid because the heat makes it difficult to go around seeing things without getting heat-stroke. If this is the only time you can visit, perhaps because you’re traveling with kids, I suggest renting a villa in the countryside, perhaps in a hill town as these generally are breezy in the evenings.

Don’t expect your hotel to have air-conditioning unless it’s got multiple stars and explicitly states that it has a/c. The buildings are old, and it’s often difficult to retrofit things like air conditioning and elevators. But more importantly, Italians are generally diffident of air conditioning or of any form of breeze, including that from fans. They fear “prendere freddo” – catching a cold draft – especially on the back of the neck, considered potentially fatal. That said, they’re starting to change; my mother in law gets headaches from a/c but declared just last night that it will be necessary to install it in her house and also at the nonna’s (grandma’s) – the latter doesn’t even open a door for fear of a breeze. See what global warming does to us?

Another thing that Italians generally don’t believe in is screens on their windows. This despite the fact that Florence in particular is mosquito-infested. There are two types of mosquitos – the normal one and the “zanzarra tigre” or tiger mosquito who has a striped body and legs. Both bite, a lot. If you don’t like mosquitos (who does?), buy a temporary screen at any hardware store (mesticheria) for about 4/5 euros. It has velcro that you can attach around the window and then you hang the screen on the velcro. The technique I use is to close the screened window, bomb the room with “Vape” – a device that spews out surely carcinogenic mosquito killer – then open the window and turn on the fan, with the door closed, to let the vape out. In 15 minutes the room has fresh air and no mosquitos, and will stay this way until you open up the door and let one in. This is the best way to ensure not being awoken in the night by buzzing.

So how do we deal with the heat? Well, anyone who doesn’t work and/or who has children goes to the beach for the summer months, and dads visit on weekends. This throwback to another age is starting to come to an end, but the city of Florence does still seem to somehow empty out and the beach areas (from Viareggio all the way down the coast) are very crowded. Anyone else sits at home with the shutters closed, the a/c or fan on, and tries not to move around too much. Sometimes at night we put on a wet tshirt and drive up to fiesole on the Vespa just to get some air that’s a few degrees colder. The best thing about being in Florence in July and August is that all my neighbours are away.

Want to know what the weather will be like this week? You can get a reliable weather forecast 7 days in advance, no more, and even that is subject to change. The best website, I find, is Tempo Italia. Technically it’s written in Italian but a picture of a sun or a rain cloud is clear either way!

For Tuscany, the official weather center is LAMMA Toscana. Their predictions are super accurate but only up to three days in advance, and it’s written in florid Italian.