I occasionally hear about contemporary art exhibitions in Florentine galleries, but seldom manage to go see them since they are often on for limited lengths of time. Thanks to a contact made at a local Instagram event (!) I was invited to the opening of a show at Eduardo Secci Contemporary on via Maggio, which has been present at this location since last spring. It’s part of a flourishing of contemporary galleries on this street, and it’s also one that puts on shows for three months at a time, giving people enough time to plan to go see them. Two Scandinavian artists, Be Andr (Norway) and Klas Eriksson (Sweden), are compared in the show called “Transformative Limits”. 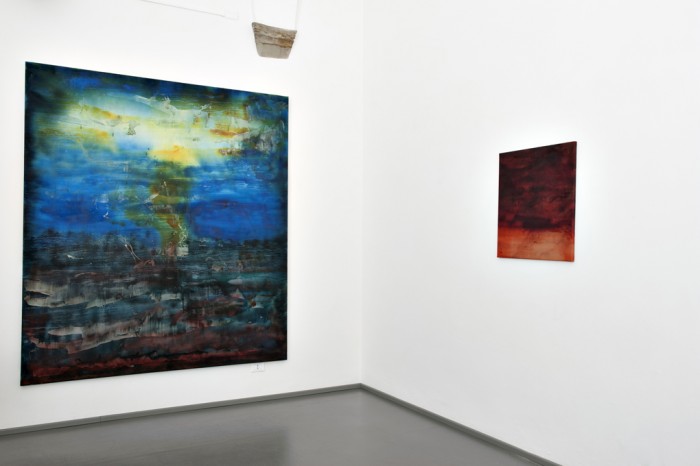 The two artists’ works are very different: Be Andre’s minimalist works play with letters, while Klas Eriksson makes a big “casino” with coloured smoke bombs. But the curator of the exhibit found that they have things in common in their working methods, not to mention that they also both studied in Florence – a nice coincidence. In the words of Lorenzo Bruni, the curator of the exhibit:

“The motivation for both artists is the confrontation with information and the media. The goal is to make the viewers active and informed not only about the places they encounter and live in, but also about the information they share and accept. The difference is that Be Andr uses a diplomatic approach to propose and establish dialogue between the viewer and the work, while Klas Eriksson is interested in bringing out a dimension of conflict and competition. Indeed, these approaches are two sides of the same coin that has forever fuelled the evolution of Western culture.”

The curator argues that the two artists’ works say to the viewer “Look – It is right here!”. That in the works – and in modern life – all the information and knowledge is at our fingertips but that we need to decipher it. The artists “are not interested in gestures or signs as an end unto themselves, but the relationship that can be established between the micro and macro context in which their own gestures/works are situated.” 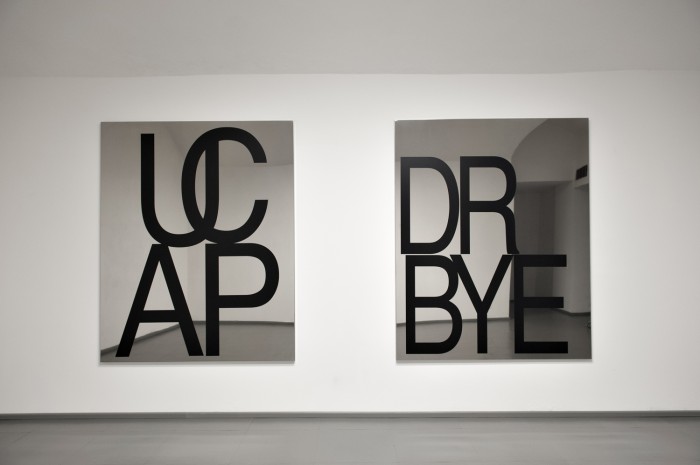 The Be Andr and Klas Eriksson double solo exhibition features works ranging from sculptures with wooden letters to vinyl texts on reflective surfaces, from large abstract paintings made with stadium smoke bombs to videos of performances and from photographic works to site specific interventions. While visually very different, the gallery organization – 2 rooms upstairs plus a basement – allows for their separation, but they also coexist comfortably. Be Andr’s works use lettering in different media – on canvas, built up sculpturally, or black vinyl cutout on mirror – to consider word and image, hypertext, ideas and objects and the like. His UCAP (Up Close and Personal) involves these letters, apparently commonly used in SMS’s (not by me!), on mirrors that make the viewer the main focus of the work – ‘the art object’ almost disappears and leaves the viewer with the text and an image of themselves. 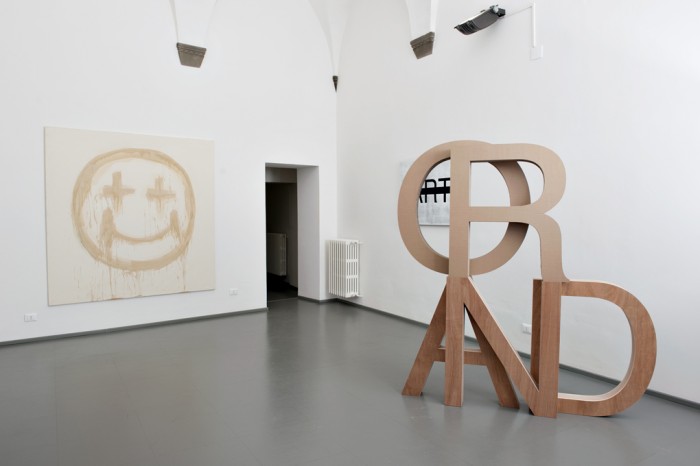 Another work in the main room is called “ROAD” (exhibited for the first time at the Saatchi Gallery in London). I thought it said AND OR since the conjunction “OR” sits on top of “AND”. Luckily the curator explains:

“The linguistic variations that emerge are revealed when the viewer takes the time to move around the sculpture. Each angle proves compelling and reveals a new image/meaning, valid both in visual and semantic terms. It is, therefore, evident that a true interpretation cannot exist and so the important issue of the current status of sculpture, of improvised assemblage and of road signs is broached.”

As for Klas Erikson, for almost a decade he has been doing collective performance pieces using coloured smoke bombs that are documented in some of the photographs in the gallery. That they are truly group happenings shows when you search the hashtag of his name on Instagram, revealing a number of photos by participants or bystanders. He started replicating the performances in the studio space and using the pigment to stain canvas. In the artist’s own words, here is his process.

“It goes in three different steps, applying the color, moving the pigment with different mediums, and then applying more color, e.g. smoke. This procedure is quite challenging at times since the smoke can’t be controlled while applying it, and that you indeed once again fill up the public realm with. The practice also has references to Yves Klein’s fire paintings and other conceptual artists from the 70s within the same field. My entrance is way different though with the collective vibe of the artistic material, made for the grand stands in stadiums, not artist studios. 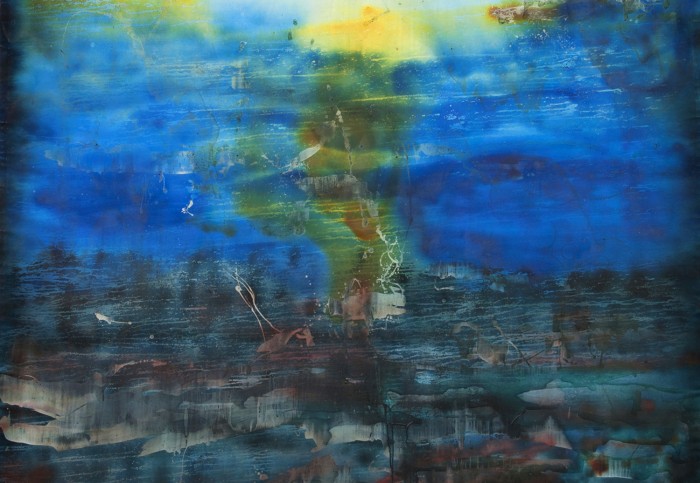 The result is a beautiful canvas that at first glimpse seems to be traditionally abstract, with a hint of Turner that I swear I saw before reading the critical text in which the artist himself likens his work to a “meta-Turner”.

The other “works” by Eriksson are actually not works of art but documentations of a happening, which he explains are very chance – he can set it up but then he can’t control the results, including the weather or if people will show up! The videos that document these happenings are uncut, single angle films that he says are for the participants to see the results (for this reason they’re published on YouTube, like the absolutely hypnotic red one I’ve embedded here), while the photos also document the beauty of the moment. Interestingly, given the chaotic output, these moments can look a lot similar to protests or terrorism, and in one instance was confused with an instance of terrorism, making the artist end up on banned travel lists (he still hasn’t been to New York because of this).

What brings the two artists of Scandinavian origin together is not the formal results that we see in the gallery, but the attention to the potential meeting of “me and my surroundings”. They wish to create a dialogue between observers and our environment in order to launch a lively discussion about what sharing this kind of awareness with others means today.