This series of free podcasts about the Uffizi gallery in Florence was designed with young viewers in mind, but should be handy for adults too. Please note: these podcasts date to 2008. You might want to buy my Uffizi Art History Guide for IOS instead. 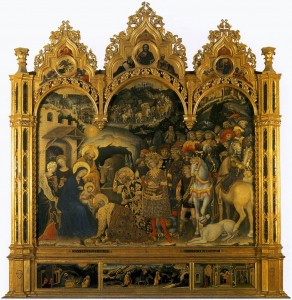 This is the third part with a presentation of the next room you encounter in the museum after Giotto. This room contains important altarpieces from the International Gothic period (14-teens and 20s). We examine the bright colours and innovations of Gentile da Fabriano and Lorenzo Monaco. Their style seems very much in contrast with the Renaissance we’re about to see, and in some ways steps backwards from the Giotto we just met. But there are innovations in these works that are forerunners of the Renaissance – after all, they were made at just the same time that Masaccio was developing his groundbreaking representations of perspective and shadow!

You can read the text of this podcast by downloading the pdf file.

International Gothic room at the Uffizi

This is the text of the podcast

So we’re done with Giotto and we want to see what happened next in Florentine Art. Now you should be in a room called the “international gothic room”. There are two paintings here that dominate the room due to their size. One is very big and colourful and it’s on the same wall as the door that you just came through. The other is a slightly smaller altarpiece just to the right of the door, with a big gold frame. Are you in the right room?

These two paintings are examples of a style that was popular in florence in the first part of the 1400’s. This style is called “International Gothic”. It’s “international” because painters used this style in other countries too, not just in Italy. The other word, “Gothic”, is a word we use to describe a type of painting that tends to be very detailed and colourful. We’ll take a good look at these two large paintings together and you’ll see what I mean.

Lorenzo Monaco: Coronation of the Virgin

First let’s look at the HUGE painting that has a man putting a crown on a woman in the center, and three panels that stick up at the top.

This painting was done by a guy named Lorenzo Monaco. In English, that’s Lawrence the Monk. I don’t know about you, but I usually think of monks who wear dark robes and are kinda quiet. Well this painting is certainly not quiet!! If paintings could make noise through their colours, this painting would be a huge party! The most dominant colour here is probably gold. Now I want you to pause and try to make a list of all the colours you see.

Did you make a list? Check it twice? OK let’s see if you got the colours I did. I see white, four types of grey, blue, two pinks, bright green, yellow and brown. Maybe you see even more colours than I do. Why do you think the artist made this work so colourful? I want you to think about that for yourself.

Now let’s look at the other work, which also has a gold frame in three parts. It’s on the wall to the left of the one you were just looking at.

The artist who painted this one is called Gentile da Fabriano. His name is interesting because Gentile in italian means “nice”. I think he must have been a nice guy. His last name is not a real last name like you and I have, but the name of the city that he comes from – Fabriano. In the old days, most people did not have a first AND last name like John Smith, or if they did, they didn’t bother to use it. So often people would be their first name, and then either their city of birth (especially if they moved somewhere else), or their occupation. My name would be “Alexandra from Toronto”. What would your Renaissance name be?

Now what I like best about Gentile’s nice painting here are the fun details that he puts into it. You can tell that he is really observing nature and trying to put it into the painting. The picture represents the newborn Jesus held by his mother on the left side. There are three men, who are three kings, who come to visit. All the other people are the whole group of people who travel with these kings. Look how many people there are! They wind all the way to the back of the painting in a long curvy line! Can you see their faces? Each person is unique – just like you and I. Can you see emotion in their expressions? Are they surprised, or happy, or excited, or talking, or working? Look at all their colourful, patterned outfits, and the funny hats!

Amongst these details there are a lot of animals. Maybe you have already noticed some. You can’t miss the horses, which the kings probably rode to get there. There are two horses at the front right of the painting, and one has his bum to us. I think this was meant to be funny. What other animals do you see besides the horses? Is that a dog at the front? Doesn’t look much like a dog to me but I guess that is what it’s supposed to be. I challenge you to find at least 3 birds and one monkey, and 2 farm animals. If you find any more, tell your parent that you win a gelato.

Now we’ve seen that these two paintings from the “International Gothic” style have two main characteristics: bright colour, and lots of detail. I asked you to think about why this is. I’ll give you ONE interpretation, but maybe you came up with another answer that is just as true as mine. Like the work by giotto in the last room, these two paintings were also made for churches. 600 years ago, they did not have electric lights. In churches, people lit candles, often in front of these paintings. So one reason for all the bright colours is that people could see them better in a dark church. The gold background also helps reflect this candlelight. As for the detail, one explanation is that it brings pleasure. Just like we enjoy looking at all the animals and fun stuff in a painting, I bet that viewers enjoyed doing that back when these paintings were made.