Renaissance artists had a most marvelous way of encapsulating grand concepts in minimal space – often with the help of a learned advisor, of course. Such is the case of the Sala degli Elementi, designed by Vasari and frescoed by Vasari and his assistants, in Florence’s Palazzo Vecchio. This is the first of five rooms that make up Cosimo I de’ Medici’s private apartments. I recently had a very special visit to the conservation works in progress led by restorer Marco Marchetti and by Eugenio Giani, president of the Regional Council of Tuscany. Giani succinctly described the iconography of the room as encapsulating Renaissance world view, with the elements symbolizing major human emotions.

Join me on this sneak peek on the scaffolding, organized by Ksenia Ermakova @toscanissimi, a tour guide from Russia who has created a group called @tuscanybloggers to discover Florence’s cultural offerings together (always followed by an aperitivo, of course). 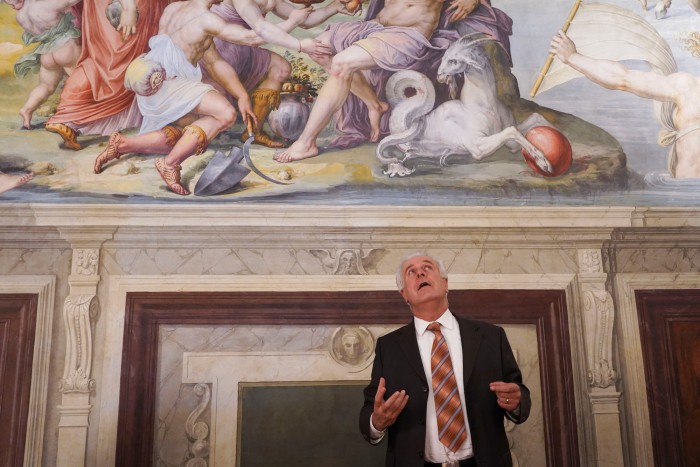 Eugenio Giani explaining the fresco above him

While the main (first) floor of Palazzo Vecchio, dominated by the huge Salone dei 500, was for public meetings, the second floor was reserved for private use during the reign of the first Medici Duke. When Cosimo I commissioned renovations for himself and his wife, Eleonora of Toledo, in 1555, the first project was the creation of five large rooms and two loggias for himself, called the Quartiere degli Elementi. These were decorated by Vasari and his workshop, namely Cristofano Gherardi known as il Doceno and Marco da Faenza. 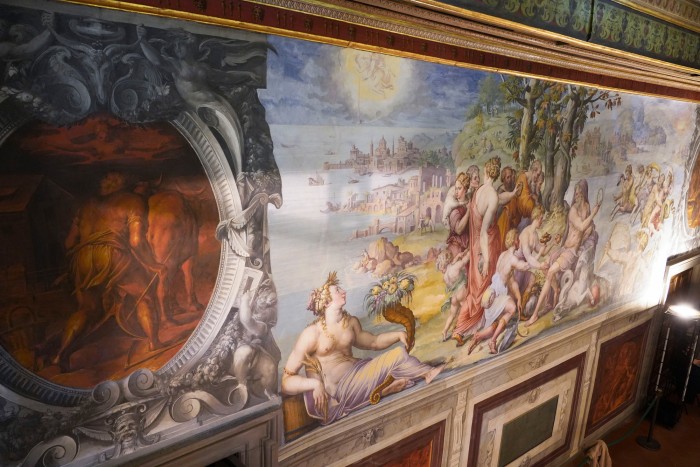 Here’s a point of view you rarely see!

And while the lower level is dominated by historical renderings, this floor tends towards the mythological. The Room of the Elements (Sala degli Elementi) is decorated with an allegory of the four elements – Water, Earth, Fire and Air. Each is represented by relevant gods and cleverly positioned to make use of the space. 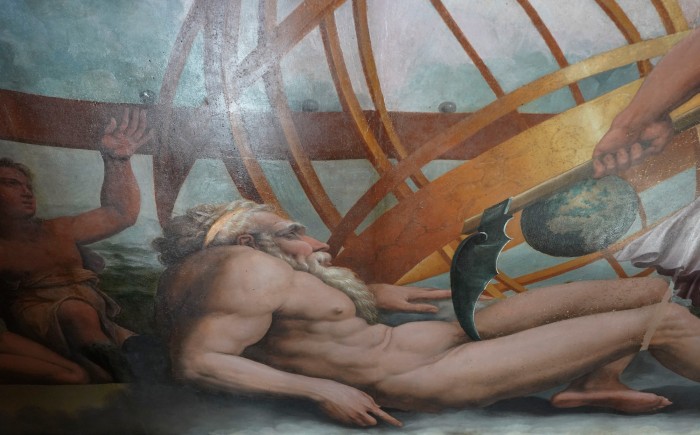 The castration of Uranus

On the ceiling, cleverly above us, is the allegory of Air, where Cronus/Saturn, god of Time, castrates Uranus, god of the Sky (because he was a bit of a jerk: he ate his children and raped his wife every night), whose seed spawns the four Elements. The one drop that escapes during this castration falls into the sea, creating the story related to Water – the Birth of Venus, goddess of love and beauty, on the East wall. 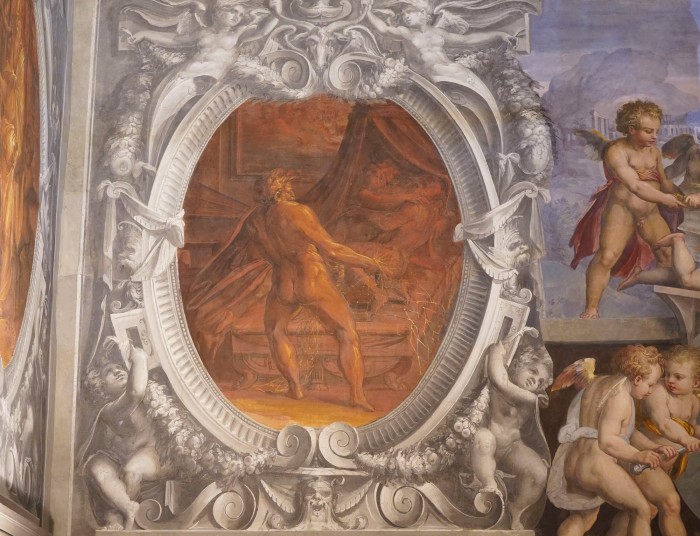 Things get heated up on the adjacent wall, where there is a beautiful fireplace designed by Bartolomeo Ammannati, and so here you rightly expect to see the god of fire, Vulcan, husband of Venus. But we also see the adulterous story of Venus and Mars surprised by Vulcan (who tries to trap them in his net), a favourite licentious topic in Renaissance times. 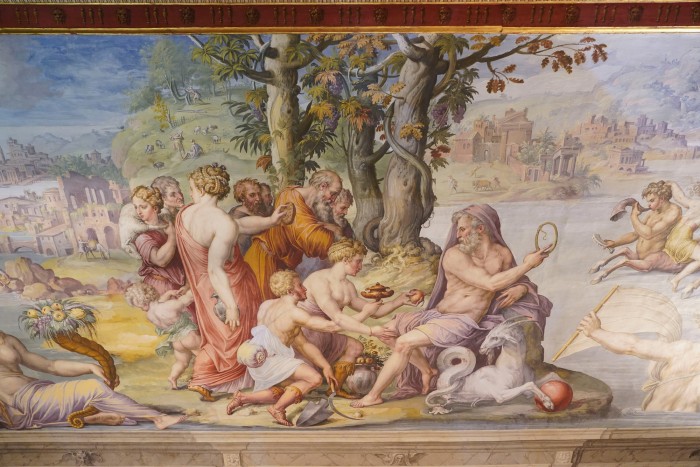 Saturn enjoying a vacation in Sicily

The West wall shows us Saturn who is enjoying being brought all sorts of gifts by other gods in a paradisaical place that happens to be Trapani, in Sicily. Swimming up to him is a man carrying a big turtle under his arm, who reminds us of the Medici Duke back here in Florence with his symbol, the turtle with a sail, which we see repeated throughout the room’s decorations, especially on the wooden ceiling. 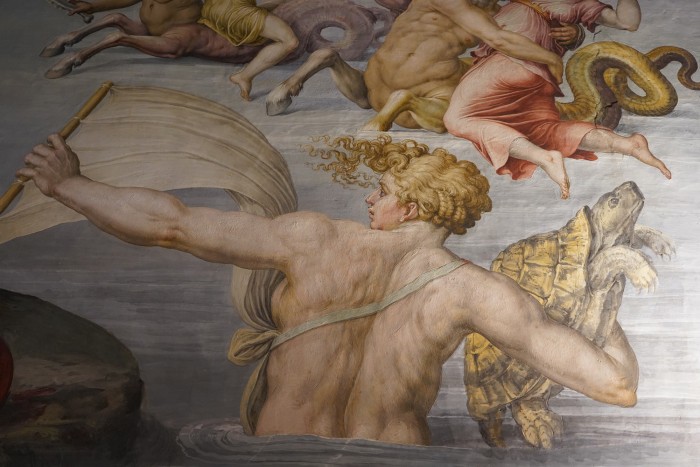 So, as a whole, we have the four elements represented by one family (Saturn/Uranus), three mythological narratives (castration / birth / adultery) and two scenes of gods (Vulcan / Saturn), in one room. 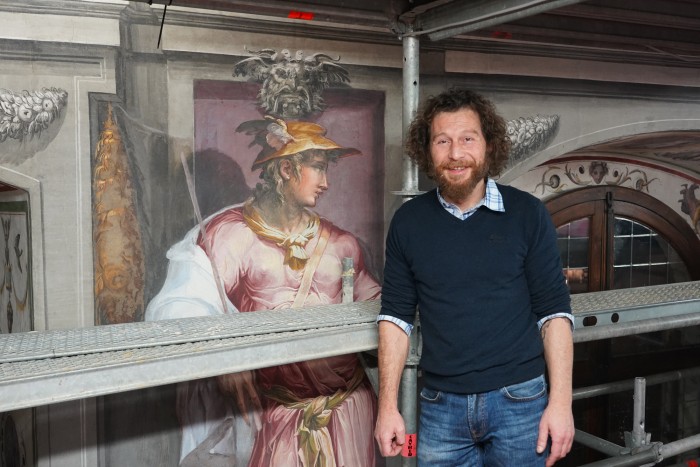 Marco Marchetti, the restorer in charge of the conservation efforts here at Palazzo Vecchio’s Sala degli Elementi, explained how this particular project got started. Word got around that the Rome-based Fondazione Giulio e Giovanna Sacchetti wished to restore a work by Vasari. Well, what better place to find a whole lot of Vasari than at the Palazzo Vecchio, right? Work began February 2017 and it took 500 days, until July 2018, to complete work on the wall frescoes and a “revision” of the painted woodwork, for a total cost of €475,000. And when the marchesa Giovanna Zanuso Sacchetti saw the completed walls, she decided the ceiling panels couldn’t be left out, so work has been extended to include this part as well for an additional €345,000. 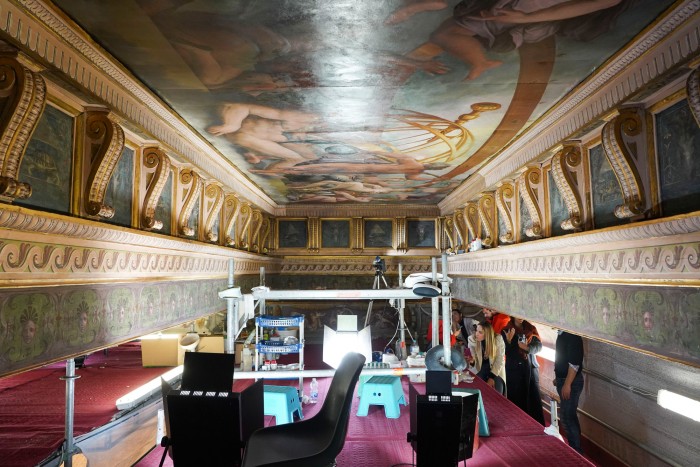 While the Sacchetti Foundation was founded in Rome in 2013, savvy Florence lovers will find that this name rings a bell. In fact, the name goes back to 11th-century Florence, and from 1335 to the end of the Florentine Republic, members of this noble family were gonfaloniere della giustizia eight times, and prior thirty times! The 14th-century Franco Sacchetti wrote a novel similar to Bocaccio’s Decameron. They were immortalized by Dante, with the rare privilege of being in his Paradise. 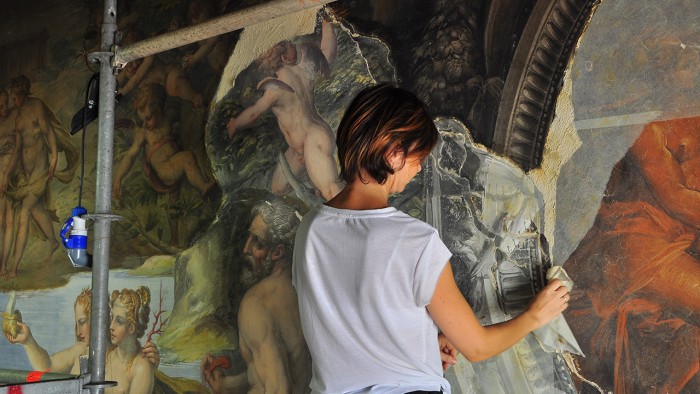 Restoration of the east wall showing the extent of cleaning and infilling that was required | ph. official website www.saladeglielementi.it

The frescoes, woodwork and ceiling panels were all characterized by yellowing varnish and deposits of dirt, as well as lacunae and overpainting/infills. Last worked on in the 1960s, the exceptional colouring of the room is once again visible after the restoration. During the entire period, the scaffolding was placed so as not to interfere with visits, and constructed in a way that made it safe for occasional public tours of the works. 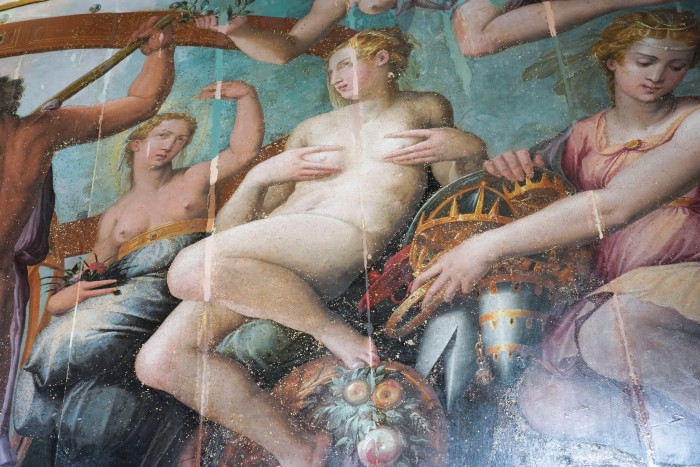 Asked if any scientific discoveries were made, Marco Marchetti didn’t provide many details, except to say that the hand of Vasari is likely missing here. Also, fun fact: he shares the same name as one of Vasari’s assistants who worked on these frescoes. 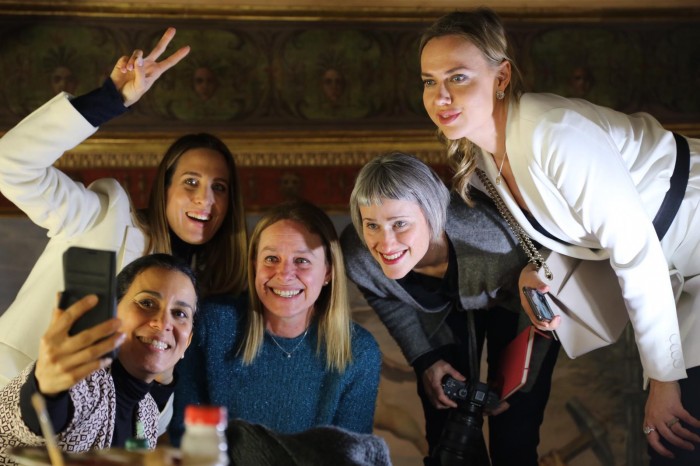 Information about the restoration work can be found at www.saladeglielementi.it