The Young Michelangelo in Florence: an Itinerary

To see in person and fully understand Michelangelo and his art, you’d have to spend considerable time seeing his works in Rome as well as in Florence, not to mention pouring over the many critical texts about him. He started sculpting at age 15 or so, and died when he was 90, and he’s one of the greatest artists of all time, so you’d be studying a lot. Fortunately, Florence is home to a number of works that paint a reasonable portrait of the artist in his first, formative years, showing both stylistic elements and political connections that would remain relevant through his entire life.

Today I had the fortune of revisiting some of these famous works during the Michelangelo in Florence seminar led by Context Travel docent Siro Chini. Through book learning, passion and close observation of works, Siro’s knowledge of Michelangelo far surpasses my own fuzzy memories of this topic and I found myself rediscovering some things I’d forgotten, and even looking at one sculpture I had no idea was by Michelangelo! 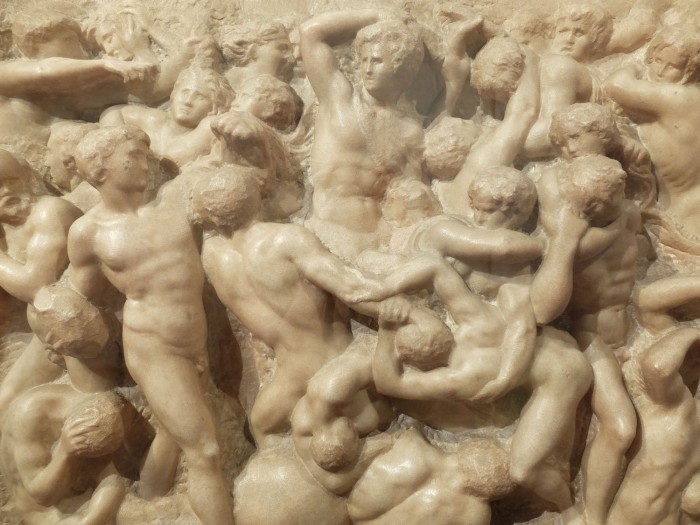 Michelangelo, Battle of the Centaurs. He was 17 when he made this.

If you ever think you haven’t done enough in your life until now, whether you’re 30, 45 or 65, don’t try comparing yourself to Michelangelo or you’ll get seriously depressed. Apprenticed to the Ghirlandaio painting workshop for 3 years starting in 1488, when he was 13, his education continued when he was admitted to the Medici sculpture garden in piazza San Marco by Lorenzo the Magnificent, where he came into contact with principles of Neoplatonism, an awesome collection of ancient art, a future Pope (Giovanni de’ Medici, later Leo X and a patron of Michelangelo’s) and instruction in sculpture. We don’t know which sculptor taught him, for his works from this period, especially the Battle of the Centaurs, already shows such individualistic talent that no “school” is apparent. What is apparent is that he was being suggested iconography by some of the great thinkers of the day, likely Poliziano. 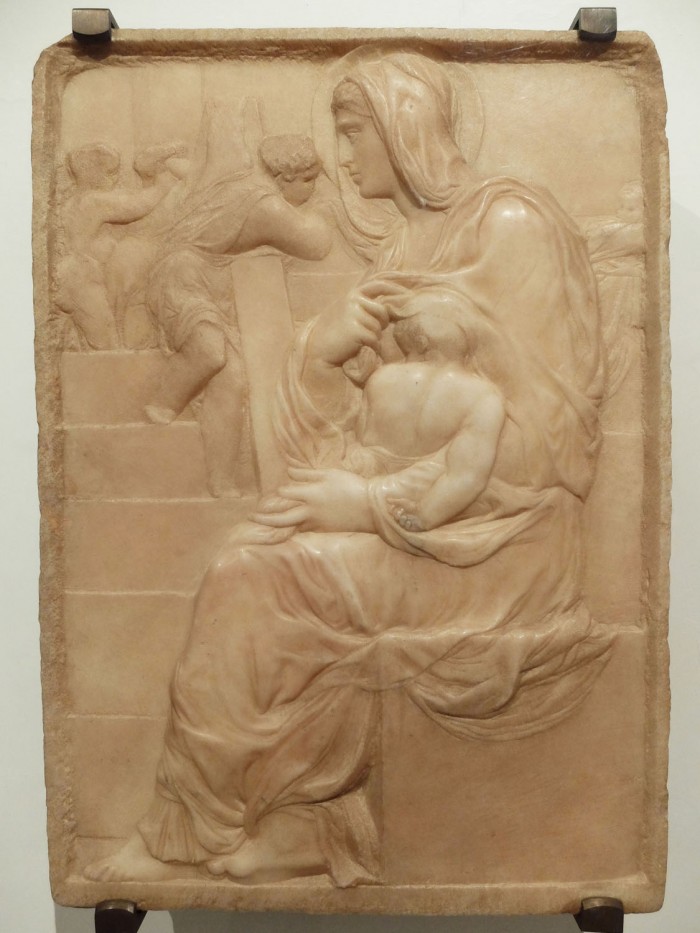 Michelangelo, Madonna of the Stairs.

The Casa Buonarroti is a house museum built to honour the master by his great nephew, and you’ll almost always find it devoid of tourists. It houses two works from the Medici garden phase, made when the artist was between 15 and 17 years old (this is the part where you can feel totally inferior). A panel in low-relief, the Madonna of the Stairs, uses a technique that Donatello developed, but if you look at the monumentality of the figure of Mary, and the twisting baby with his muscular back, you can see little similarity to Donatello’s more elegant early reliefs. Rather, you might see some ideas that become fully formed later, like in the Doni Tondo, the only finished painting by Michelangelo in Florence, where the Holy Family struggles to contain the twisting and turning Christ Child, and the playing boys in the background are onlookers, just as they are here.

In the same room is the Battle of the Centaurs, dated 1491-2, a high relief representing a battle between men and centaurs who are half man, half horse. It’s in the style of an ancient sarcophagus, but likely dictated by Poliziano, a young Neoplatonist philosopher present in the Medici household at the time. On one level, it shows perfect bodies, the artist’s amazing understanding of proportion and movement already at this young age. But on the deeper level, it speaks of the struggle between our human and our animal natures, and it is also a battle for love in some ways, for those fighting the centaurs are attempting to save long haired women (whose bodies we see rather little of – Michelangelo already preferred the male body).

When Lorenzo the Magnificent died in 1492, Michelangelo’s idyllic education location came to a swift end. He then had the opportunity to go to Rome (after a stint in Bologna) when his agent sold one of his pieces to a Cardinal saying it was ancient; the Cardinal found out it was a fake and appreciated the good joke, so sent for the artist to come work for him. Cardinal Riario returned the faux ancient Cupid to the dealer (and history has lost track of it), but had the maker over to his house, from whom he commissioned a pagan subject, a representation of Bacchus, the god of wine. 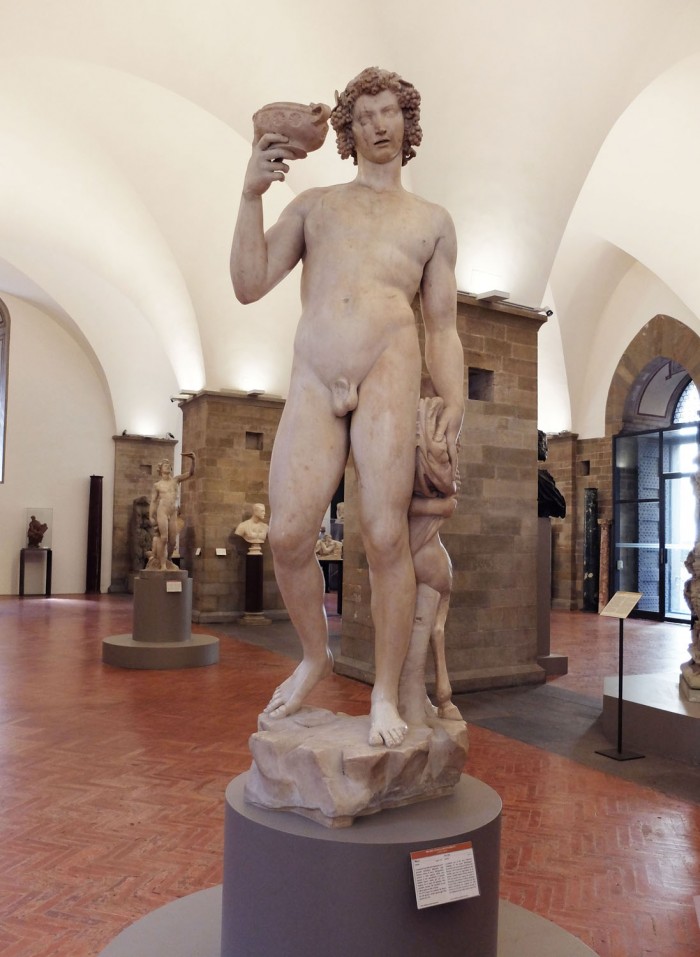 The statue is now in the Bargello Museum, so we can evaluate it with our own eyes. I’ve always been impressed at how Michelangelo manages to make a piece of marble look so soft. He sways in abandon, his flesh softened with excess, leaning on his little satyr friend (who also handily provided physical support for the standing marble). Sculpted in the round, it’s particularly sexy from the back. It’s not the statue’s nudity but his sensuality that probably made Riario refuse the work, which was then paid up by Riario’s envoy Jacopo Galli, in whose sculpture garden it is later recorded.

Back in Florence and working in a religious topic, the Bargello also houses the unfinished Pitti Tondo, a sculpture from some time between 1503 and 1506. The timing is similar to that of the Doni Tondo, which is painted. Tondi were in fact frequently painted as marriage or birth gifts, slightly less frequent as sculpted reliefs. 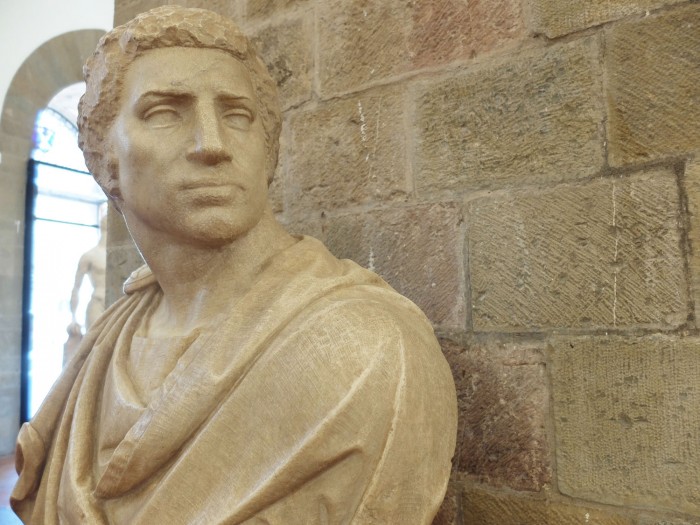 A slightly later work representing Brutus was commissioned to Michelangelo from a Florentine anti-medicean patron, Cardinal Niccolò Ridolfi, who had fled Florence for Rome in 1530. I’d literally never noticed this work, which my guide pointed out as a Michelangelo. The portrait isn’t particularly powerful in my opinion, and I have no doubt that the rather untalented Tiberio Calcagni had a major hand here. The bust depicts the ancient Roman hero Brutus and was intended to commemorate the saving of the Florentine Republic from a tyrant, much like the attempts of Brutus and Cassius to protect republican values in a government quickly becoming an empire (source).

After the Bargello, we headed to the Accademia Gallery, where I’ve been hanging out a fair amount lately because of my involvement in the production of a book about the David. On the way there, we passed behind the Duomo so that our guide could point out the original location of the statue, which was commissioned by the Opera del Duomo to go way up on one of the cathedral spurs, where nobody would really see him! 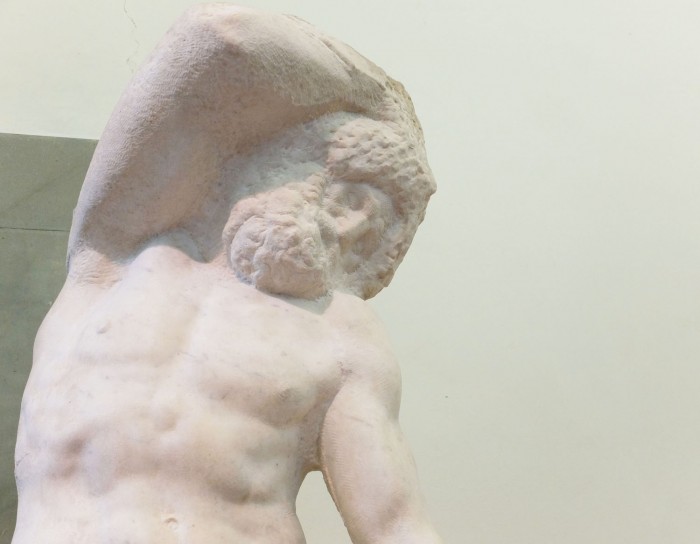 One of the unfinished sculptures by Michelangelo in the Accademia

Before rushing to see the great David, we spent some time looking at the unfinished sculptures that line the sides of the large room built to house Michelangelo’s best known masterpieces. The set-up gives you the impression that the artist continually tried to finish works, tried sooo hard, and then finally, he did something good! Really, it’s quite the opposite. His penchant for the non-finito got worse later in life – though most of the time, it wasn’t his fault but that of patrons who either died or changed their minds. The unfinished “prisoners” in fact post-date the David and were made for the tomb of Pope Julius II, the project of which was continually revised as well as suspended between deaths, sacks and more important things to do, like paint the Sistine Chapel Ceiling. 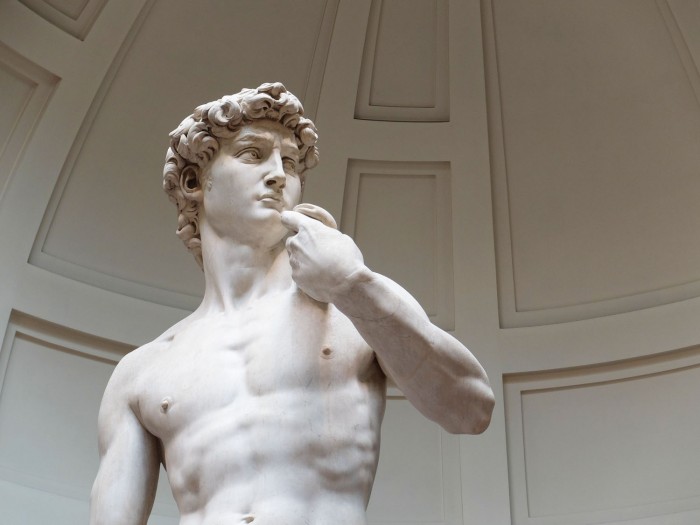 The David by Michelangelo

What to say of the David himself? So many people flock to see him every year, and we hear stories of both men and women falling in love with him. He’s held up as an image of perfection, yet close looking shows he’s far from perfect. Today we talked about him within the context of other sculptures of the same biblical subject by Donatello and Verrocchio, and you can easily see how this sculpture broke from tradition, portraying a larger-than-lifesize male nude at a different moment in the act of killing the giant Goliath than anyone had ever thought to show before. His intense gaze and poised body reflect his preparation for the task at hand. Perhaps the appeal of the sculpture lies in its message, which Siro summed up as thus: “you can do anything if you put your mind to it.”

Other places to see Michelangelo in Florence

If you’re not tired yet and want to cover all the works by Michelangelo in Florence, there are two more places to visit. The Uffizi Gallery houses only one Michelangelo, the Doni Tondo. Still in its impressive original frame, it is housed in a new red room designed to enhance its viewing experience.

The Medici Chapels is your next stop: this unfinished chapel at San Lorenzo is an example of Michelangelo’s Mannerist architecture that he also applied in the Laurentian Library. Like the Julius tomb in Rome, this major architectural tomb project got downsized and abandoned, but not before Michelangelo finished carving 4 very important sculptures – the allegories of night and day, dusk and dawn, which lie on the sarcophaghi of two members of the Medici family. Also here is the Medici Madonna, another twisting, turning Christ Child in sculptural form.

Take the tour, read the books 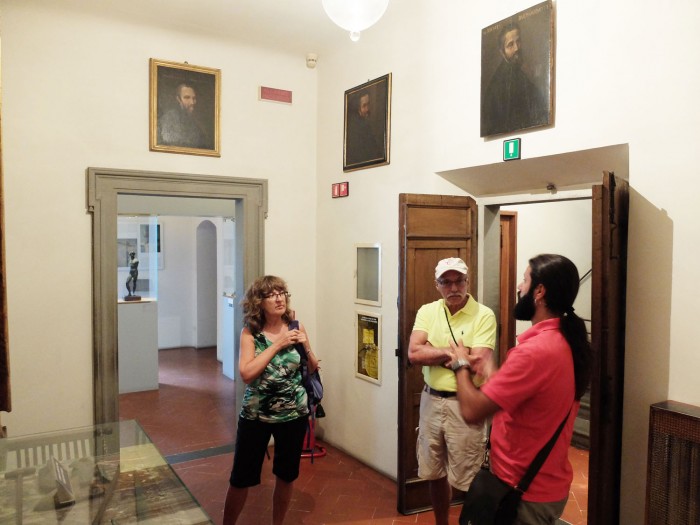 Our very small group tour – Context tours have a maximum of 6 people in a group!

The tour I did was the Michelangelo in Florence seminar by Context Travel, which focuses on early Michelangelo. To complete the understanding of this artist and see his later works as well, you might want to also take the Medici, portrait of a family walk.

For further reading, I suggest: