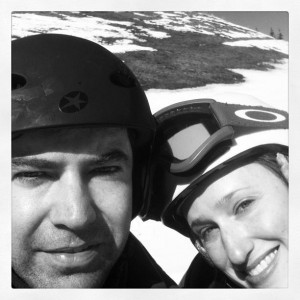 Tommaso and I just got back from a week’s “settimana bianca” (snowboard holiday) and, as we truly enjoyed it, we’re sharing various parts of our experience for future travelers. We stayed in Corvara in the Alta Badia area of the Dolomites with another couple and their child. We chose this area due to the proximity to Florence and its renowned beauty and good services, and we were not disappointed.

If you are planning a trip to this area, here is some practical advice – how to get there, where to stay, and where to eat. See my other posts for the best runs for snowboards, four things to do in Alta Badia, Breakfast on the slopes, and Corvara for kids.

How to get to Corvara in Alta Badia 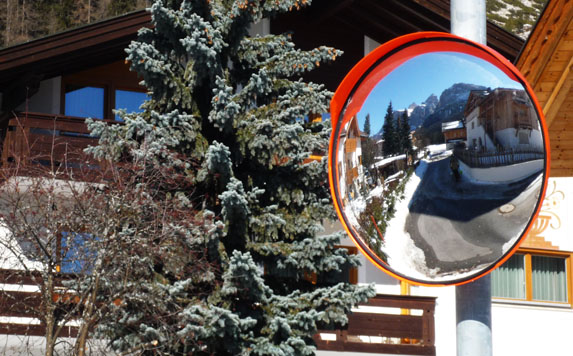 The short and easy drive from Florence to the Dolomites in general makes me wonder why we would ever holiday outside of Italy! While the area close to Brixen/ Bressanone is close to the highway and short enough a drive for a long weekend from Florence, Alta Badia is accessed by one of two mountain roads that are best taken for a week long trip.

If you are driving here arriving from the south, take highway A1 towards Bologna, then take A22 after Modena towards the Brennero Pass. Exit at Chiusa and follow for Ortisei / Selva di Val Gardena, them Corvara. This road goes over a curvy mountain pass but we think it is fastest. On the way home we tried the other approach via Bressanone, Brixen and Brunigo, which has more tunnels, but also a lot of traffic. 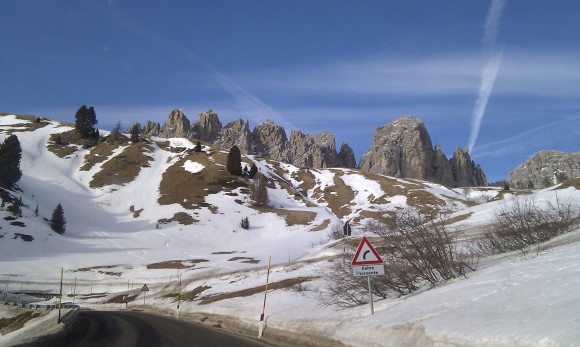 If you are arriving in Italy by air, you will probably need to take the train for a bit until Bolzano. From there I would recommend getting a car rental, because you will need that liberty to move around once you arrive.

It is possible to take a bus to this area, for example, with the integrated public transport system the bus from Bolzano (train station) to Corvara takes about 2.5 hours and costs 17,50 euro. Once you are in Corvara you can go anywhere in town by skibus (5 euro for 7 day pass) or foot, but your evening activities would be limited to that town since the bus between towns does not run late. I hear there are at least two nightclubs in town if you are into that kind of thing. I would not know – we chose to ride early and enjoy evenings in together!

Where to stay in Alta Badia 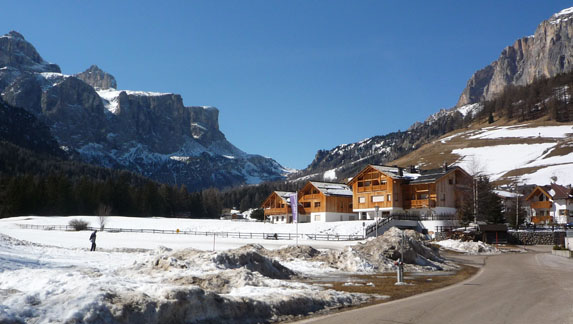 This is where we stayed!! Nice eh?

As mentioned, we stayed in the town of Corvara. We had a very good deal on an apartment rental through my husband’s work, and we shared it with another couple, giving us budget to spend on fun things (see below)! A small two bedroom in this area averages upwards of 1500€ per week in mid season. We stayed at Tino and Sara apartments, rented through Agenzia Tablé. The agency was not particularly helpful and they charged for every little extra (like sheets!) but the apartment was lovely, in bio-architecture that felt very solid, full of light, quiet, warm, and also well-located at an easy walk to stores. Corvara is quite expensive and chic, frequented by the very well dressed; I had never been anywhere like it before. From town and most of the hotels and apartments you can directly access the slopes at Boe or Col Alt, the latter being the location of the first chairlift in the entire Dolomites!

Two towns over is San Cassiano, which also has a gondola into town (Piz Sorega, see below). Despite the presence of two very fancy hotels, this town is slightly more down to earth and you might find a deal at a B&B that costs less than the area average.

The local decor sense tends towards the kitch unless you pay through the nose. We determined that “renne” (reindeer) are a unit of measure here and zero renne is the most desireable, that is, a warm but modern style with absolutely no deer heads, silhouettes or statues in sight.

Where to eat in Alta Badia

Let’s start by saying that nothing comes cheap in this area. And that food is calorie-packed, generally good, although overly meaty for a vegetarian. Specialties include canederli in brodo (a kind of giant round dumpling with prosciutto in it, floating in broth), spätzle (spinach and potato pasta substitute), grilled meats, and strudel of course. It’s hard to find a bad meal here; the worst that can happen is that service may not be great, or that the cost-value ratio is skewed.

On the slopes, we suggest avoiding Club Moritzino at Piz la Ila, an anomalously overpriced and awfully decorated chalet that doubles as a nightclub when the lifts are closed. Rather, for a nice lunch in a classy setting go to Las Vegas (despite the name) at Piz Sorega. Or, just steps down from la Ila lift, Utia Bamby advertises organic meat on the grill and the fact that “if you want french fries, go elsewhere.” 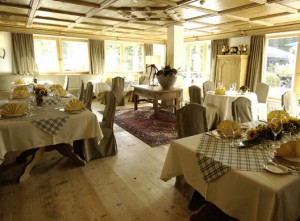 For a special dinner, we loved the restaurant at Hotel Armentarolain San Cassiano. The service was absolutely perfect – formal but not affected – and they are attentive to special needs and to children. There is a gluten free menu and vegetarian options. I had gnocchi with radicchio and the salad bar. Tommaso had a potato cream soup followed by the excellent Venison saddle on juniper sauce with polenta, while Fabio tasted a local dish called Gröstl (potatoes and sausage) and Laura had the Suckling pig cutlet on Prosecco-sauerkraut. The atmosphere was memorable. 100 euros per couple with wine.

We had a fabulous week in Alta Badia and are already talking about returning in 2013!

This is a sponsored post, with thanks to Budget.