How to Travel the Cinque Terre in Winter Too

On a recent trip to Riomaggiore in the Cinque Terre, I discovered that I love this famous place as much as many tourists do. But I set out to do it right, without the crowds, and with the help of an expert. I asked Bianca Gignac and Kiiri Sandy of Italian Fix and the Gigi Guides for advice, and thanks to them, it was a great experience. I’ve asked them to write this guest post about Cinque Terre in Winter, when certainly the crowds thin out, but the area remains surprisingly a good option for visitors.

“I’m dying to see the Cinque Terre, but the only time I can go is in the winter. Is going then really such a bad idea?”

We get this question A LOT. And frankly, most of the time we recommend against going in the off-season if you can help it. The weather can be unpredictable and the towns all but shut down, so there’s not nearly as much to do. If you’ve been saving your vacation time and money all year for this one holiday, we’d hate for you to spend it all there only to find it rainy and deserted when you were expecting sunny and alive.

But a really bad idea? Not at all. In fact, with the right expectations and perspective, the off-season can be the perfect time to visit the Cinque Terre. 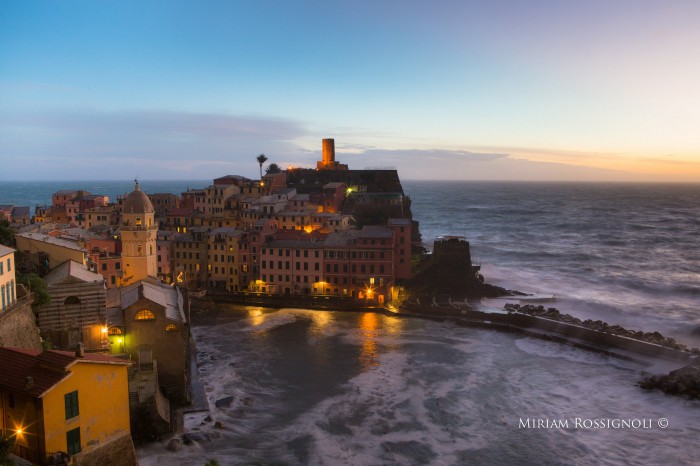 You’ll hate it in the winter if…

Hate-it people, do yourselves a favor and save your Cinque Terre trip for July or August. (If you want a summer itinerary, grab this great one.) Hit up a city like Florence or Rome in the winter, where there are loads of indoor museums and art galleries to keep you busy and where restaurants and bars are all open year-round. Or try a place that’s meant to be enjoyed in cold weather, like a ski village in the Italian Alps or one of the Christmas market towns like Bolzano.

Love-it people, let’s talk about how to make your off-season Cinque Terre trip a dream vacay. 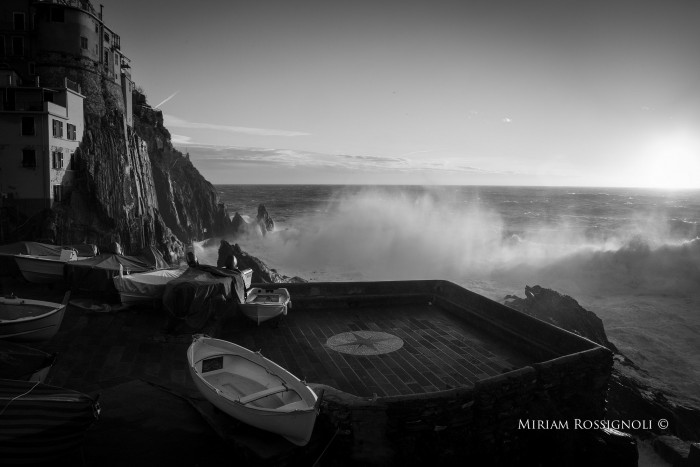 It’s all about rolling with it. And cheap accommodations. Yeah, it rains here sometimes. Sometimes for days at a time. And that usually happens during the off-season. But instead of getting frustrated by what you can’t do, go in with a sunny-side-up outlook and some advance prep-work.

Not all hotels and room rentals stay open throughout the off-season, but many do, so this is your chance to get the pick of the litter for peanuts compared to what you would normally pay — rooms in the off-season often cost less than half what they do in the summer. You know you might be hit with some crappy weather, so invest more time into choosing accommodations you really love, ideally with a kitchen. That way if it does rain, you’ll have a cozy little retreat to hole up in with a good book, a bottle of wine, and a load of fresh ingredients from the alimentari down the street, or better yet, the outdoor markets in La Spezia or Levanto. Strike up a conversation with your AirBnb host or the grocer or even the men hanging out at the bar about an Italian dish you want to try — everyone LOVES talking about food in Italy and how to make it best, so look at the rain as an opportunity to get some impromptu tutoring on how to whip up some genuine Italian fare.

The good news is that while it does rain more in the low-season, clear days far outnumber wet ones — on average there are about eight rainy days per month throughout the winter compared to five in the summer. So odds are good that you won’t get wet, but if your holiday does happen to run into bad weather, having a flexible, let’s-make-the-best-of-it attitude will make all the difference.

Does everything close in Cinque Terre in winter?

The truth is, the Cinque Terre does all but close up shop when the season ends at the end of October. The people who live here have just spent eight months catering to the millions who descend on these five towns every summer, and they’re tired. So most of the stores close, and the restaurants and bars take turns shutting their doors too. With the exception of Corniglia though (the smallest, least accessible, and therefore least visited of the towns), you should always find at least one restaurant, one bar and one grocery store open in each of the villages (except on Sundays when everything closes). So while you won’t be spoiled for choice, you won’t be totally stranded either when it comes to food and drink. 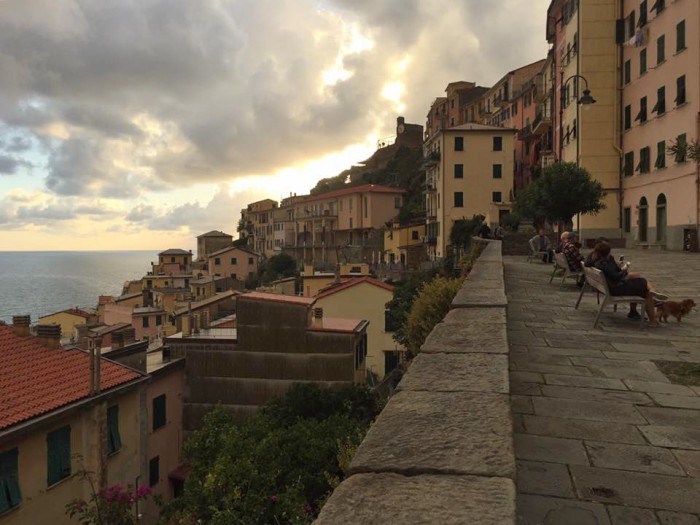 In the dead of winter, you won’t see a lot of people out and about. The locals tend to hibernate during the cold months, but you will run into them in the grocery stores, and definitely at the bar — even if there doesn’t seem to be another living soul on the streets of town, you’re almost always guaranteed to find a handful of men watching the game or just keeping each other company there. And the bar’s a great place to strike up a conversation with a local, who tend to be much more enthusiastic about talking to tourists in the low-season than when the place is overrun by them. It’s not unheard of for these conversations to lead to an invitation to visit someone’s private vineyard or cantina, a motorboat ride along the coast, or dinner at the home of your new friends. And those can be the experiences that really take a trip to the next level.

Will the trails be open?

It depends. They don’t close just because it’s winter, but they will close because of landslides and unsafe conditions, usually caused by rain. And there tends to be more of that in the off-season. But again, odds are better that there won’t be rain than that there will be, and if one trail is closed, there are always a dozen others to choose from.

Cinque Terre in Winter: things to do

Last year it was warm and sunny until the end of October, so people were still on the beach and in the water just before Halloween. Even the ferries extended their run — they usually stop at the beginning of the month. Don’t expect to be swimming from November on though, and not until around May or June in the spring. But don’t despair either — sometimes having to get a little creative about your activities can generate some of the most memorable experiences. Here are a few ideas for things to do broken down by season. 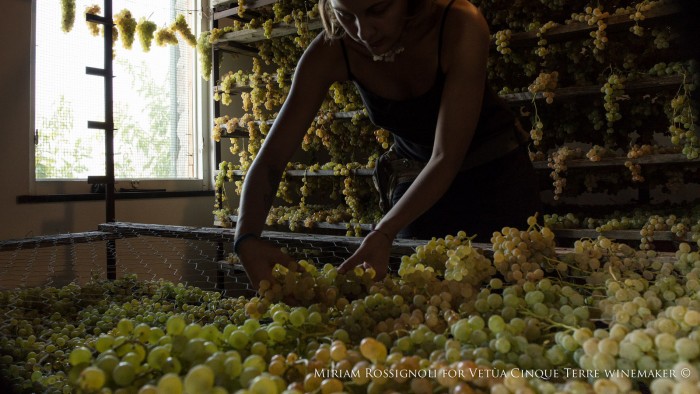 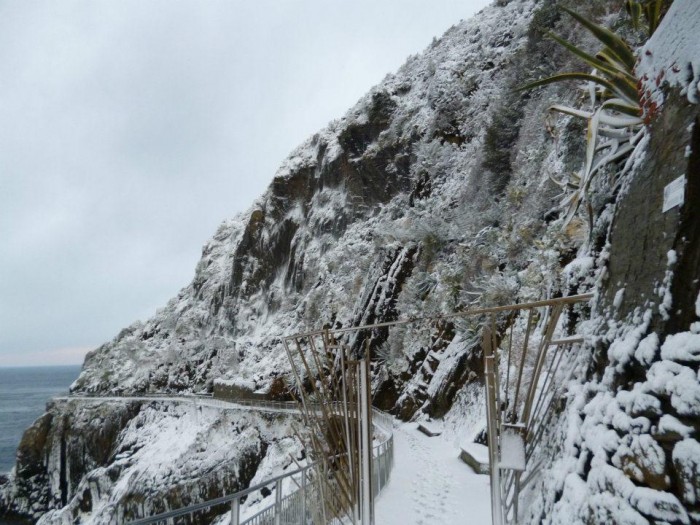 The bottom line when considering a trip to the Cinque Terre during the low-season is that you have to be true to what a good time means to you. It’s definitely not for all temperaments — even the locals can’t seem to agree. Some complain about how triste the place becomes, while others wait all year for the few months when the towns belong to them and them alone again.

If seeing these five villages during the off-season sounds like your kind of holiday, check out Gigi Guides. It’s full of our top picks for places to stay, places to eat, the lay of the land, how to get around and more — basically everything you need to travel this area like an insider.

With love and cioccolata calda,
Bianca

Some of the photos in this article have been kindly provided by Miriam Rossignoli, a photographer and resident of Monterosso whose family goes back to the 14th century – check out her works at www.miriamrossignoli.it

This post is part of the Italy Roundtable discussion of “Italy in the Winter”, so if you’re thinking of visiting the Cinque Terre at this time, you might also find the following articles helpful!

This post was created by the the good-looking folks at Gigi Guides, the go-to Italy resource for travelers planning their upcoming trip to Italy.