The Colosseum facts and history

The Colosseum is an elliptical amphitheatre in the center of the city of Rome, Italy. Originally the Flavian Amphitheatre, it is the largest amphitheatre ever built in the Roman Empire. It is one of the greatest works of Roman architecture and engineering. Occupying a site just east of the Roman Forum, its construction started in 70 AD under the emperor Vespasian and was completed in 80 AD under his son Titus, with further modifications being made during Domitian’s reign (81-96). The Colosseum hosted large-scale spectacular games that included; fights between animals, the killing of prisoners by animals and other executions, naval battles via flooding the arena, and combats between gladiators. It has been estimated that about 500,000 people and a million wild animals died in the Colosseum games. 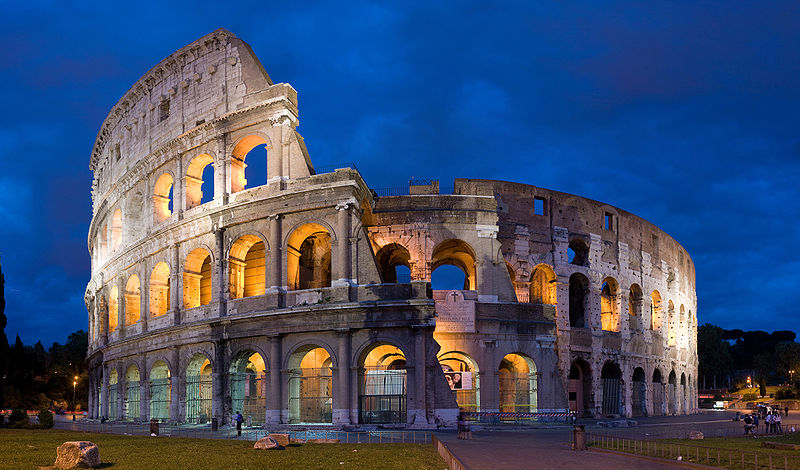 After Nero committed suicide in 68, Vespasian (emperor 69-79) decided to shore up his shaky regime by building an amphitheatre for the people on the site of the lake in the gardens of Nero’s palace. The Colosseum was a grand political gesture. Suitably for that great city, it was the largest amphitheatre in the Roman world, capable of holding some 50,000 spectators.

The Colosseum was opened in AD 80 by Vespasian’s son and successor, Titus. Given the scale of the enterprise it was built remarkably quickly. And given the site, in a valley where there was previously a lake, it had to be planned carefully. When the Colosseum opened, there was a marathon of celebrations that went on for 100 days at every level of society from royalty to the barbarian, as they revelled in their new stadium (by johnson). 9,000 wild animals were killed in the one hundred days of celebration which inaugurated the amphitheatre.

The Colosseum was ingeniously designed. The invention of arches and vaults made of brick-faced concrete allowed Roman architects much greater spans and more visual variety. The Colosseum’s elaborate honeycomb of arches, passages and stairways allowed thousands of spectators to get into the space to watch murderous games. And the Colosseum’s imposing exterior was then, as it still is, a marvelous monument to Roman imperial power.

The ordered beauty and formal regularity of the Colosseum’s exterior is created by three storeys of superimposed arches with engaged (i.e. semi-circular) columns. These columns are of different orders on each storey (Doric at the bottom, then Ionic, with Corinthian columns in the third storey). The fourth higher blind storey is punctuated by pilasters, decorated with Corinthian capitals. The exterior was decorated at the top with glistening gilded bronze shields, and the arches were filled with painted statues of emperors and gods.

The passage of the Colosseum was designed so that the immense venue could fill in 15 minutes, and be evacuated in 5 minutes. Each entrance and exit was numbered, as was each staircase. There were 80 entrances in all, 76 for ordinary spectators and 4 for the imperial family. The entrances were marked by giant porticoes, each topped by a gilded horse-drawn chariot. The emperor also had a private entrance, which went under the seats, and emerged in the imperial box.

Seating was divided into different sections. The podium, the first level of seating, was for the Roman senators, and the emperor’s private box was also located on this level. Above the podium was the maenianum primum, for the other Roman aristocrats who were not in the senate. The third level, the maenianum secundum, was divided into three sections. The lower part, the was for wealthy citizens, while the upper part was for poor citizens. A third, wooden section was a wooden structure at the very top of the building, added by Domitian. It was standing room only, and was for lower class women.

The most ingenious part of the Colosseum was its cooling system. It was roofed using a canvas covered net-like structure made of ropes, with a hole in the center. This roof sloped down towards the center to catch the wind and provide a breeze for the audience; Sailors manipulated the ropes.

The Colosseum has suffered many disasters including a great fire of 217 following a lightening strike which put the Colosseum out of action for 21 years. Two earthquakes in 442 and 508 damaged the main structure of the historic stadium forcing it to shut down for good in 524.

After the splendor of imperial times, the Colosseum was abandoned, and in turn it became a fortress for the medieval clans of the city, a source of building materials, picturesque scenery for painters, a place of Christian worship. Today it is a challenge for archaeologists and a location for events and shows. And even though the once-perfect red brick arches are falling apart and the animals and warriors that moved through those gates are no longer here, the ghosts of glory days gone by are easy to sense.

As a visitor, you will be overwhelmed at the architecture you see at the Colosseum site and you will recognize the designs because they have been used in stadiums all over the globe. The Colosseum is ranked one of the premier attractions in Rome and tourists from different corners of the world assemble here to explore the mystic aura that engulfs this grand monument.

“Ganagi” is an Indian university student and has never been to Italy, but wrote this excellent essay about the history and architecture of the Colosseum through accurate research. He wins saffron from San Gimignano in arttrav’s 2009 writing contest.