People say Italy is beautiful. They also complain about the crowds coming to gawk at Italy’s world-famous sights. Now imagine an Italy without tourists. Just an hour north of Rome is a whole region full of great things to see, far from the prying eyes of maddening crowds.

It’s not surprising: wedged between the tourist magnets of Rome and Tuscany, Northern Lazio gets neglected by visitors rushing from the Colosseum to Chianti. If you take a slow train out, though, you can check out what I call ‘Minor Sights’ in Northern Lazio, keeping in mind that these are often only ‘minor’ because the competition is so tough: compared with Rome and Florence, practically the whole world is a minor attraction.

If you think spa treatments are a recent phenomenon, think again. The Romans were passionate about bathing and no Roman town was complete without a bathhouse or two. But the Romans also cleverly took advantage of the natural hot springs that occur all over Northern Lazio. These are still available to you and me so we can soak our weary feet (or more) after a long day of sightseeing

Take the Piscine Carletti, just outside Viterbo. There is no entrance fee, no fence, and no lifeguard. Right in the open fields people enjoy the much-touted benefits of these warm mineral baths. The only rule seems to be that the smaller your bathing suit, the more swag you’ve got. 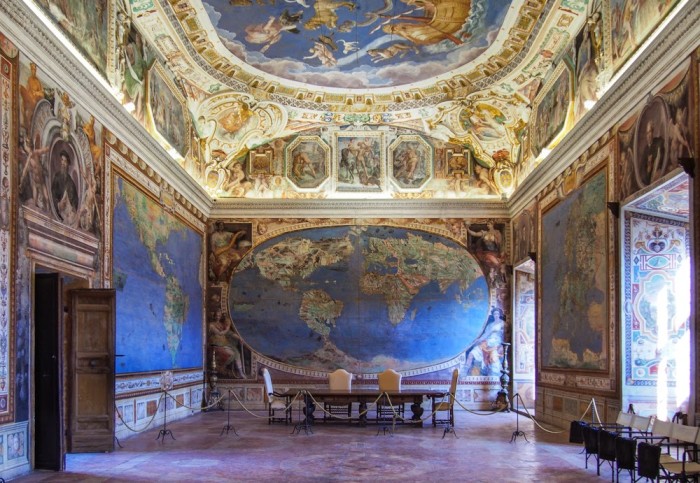 The Farnese family left their mark all over Northern Lazio. Their not-so-humble abodes litter the region since they built one in every town they controlled (most likely with the money that the poor peasants had to pay for “protection”). When Alessandro Farnese was elected Pope Paul III, he pulled out all the stops and turned a small fort in Caprarola into a Renaissance palace with some of the best interior decoration this side of the Sistine Chapel. My absolute favourite is the map room, which shows in great detail the world as it was known back then. Try and find your home town: unless it’s in Australia (still Terra Incognita back then), you may find it. Read a longer article about Palazzo Farnese here. 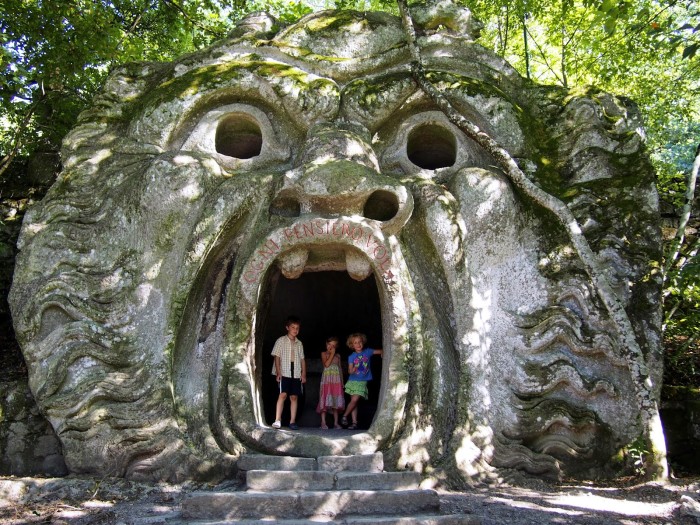 Before there was Disneyworld, there was Bomarzo. This park was the brainchild of Pier Francesco Orsini, a scion of another papal family. Pier apparently went a little off his rocker after his wife died, locking himself up in his castle and coming up with strange new plans to redesign his little garden. And so he built what can credibly described as the world’s first theme park, a Mannerist collection of weird monsters, fanciful statues, and even a haunted house, built to delight, awe and entertain visitors.

There is no Mickey Mouse (although a little mermaid is easily found), but children and adults alike will delight in exploring these bizarre constructions, almost 500 years old and all carved out of solid stone. Read more about Bomarzo on Minor Sights 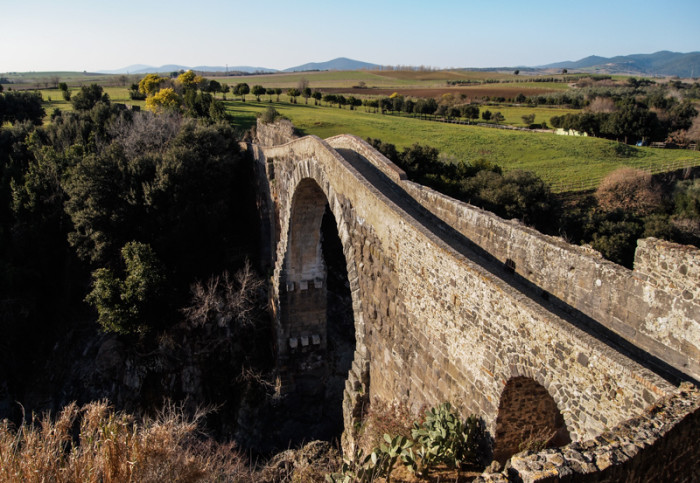 Vulci is as old as it is fascinating. Compared to Vulci, Pompeii was an upstart urban development. Well before the Romans learned to read and write, the Etruscans had a thriving city here, trading with places as far away as Greece and Egypt.

Alas, it didn’t last. At some point the Romans conquered the Etruscan cities, including Vulci. Most Etruscan portraits and statues show them reclining on couches, enjoying banquets: perhaps a people too lazy to stand up and fight only deserved to be subjugated. The Romans added some roads, built some houses, but with power shifting towards the Eternal City, Vulci slowly sank into decline and then into oblivion. Today, we can admire the city’s layout, foundations, and remains of the city walls, as well as the infamous Devil’s Bridge, whose foundations go back to Etruscan times.

ArtTrav included Vulci amongst 5 archaeological sites near the sea, and on Minor Sights I’ve written a longer description about why you should visit Vulci.

These four Minor Sights are just the tip of the proverbial iceberg. With three lakes, dozens of medieval and renaissance towns, and more Etruscan tombs than you can shake a stick at, Northern Lazio can easily support a week of sightseeing and relaxation, chasing from one Minor Sight to the next. So next time you’re contemplating how to divide your time between Tuscany and Rome, take the slow road to Northern Lazio. You won’t regret it!

Michiel is the founder & editor of Minor Sights, a website dedicated to fascinating places that are barely mentioned in guidebooks. He divides his time between Paris and Northern Lazio.