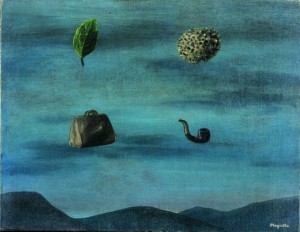 Travellers to the Bel Paese often seem to wander the country in a food-and-art-induced dream-like state — and those who have chosen to live here are soon struck by the surreal bureaucracy — so Perugia’s new Teatro del Sogno: da Chagall a Fellini exhibit at the Galleria Nazionale dell’Umbria seems fitting in its theme of dreams in the work of early 20th century surreal art and cinema.

This is very much a crowd-pleasing, getting bums in seats sort of show.  Not particularly challenging or innovative, the grouping of more than 100 works from early modern artists including Chagall, Dalì, Magritte, De Chirico, and Man Ray are sure to satisfy the majority of casual art appreciators who had one or more posters of these works adorning their dorm room walls in college.

The exhibition space was retrofitted from the recent Steve McCurry photography exhibit; in that context the layout was irritatingly confusing and unfocused, but in the Theatre of Dreams the wandering, slightly claustrophobic installation just adds to the somnambulant feel. Works depicting scenes from another dimension pop out of the semidarkness around every turn, and the lack of any posted notes or explanations (aside from the spare tags identifying each work and artist) frees visitors to simply focus on the alternatingly beautiful and bizarre paintings, drawings, and sculptures. 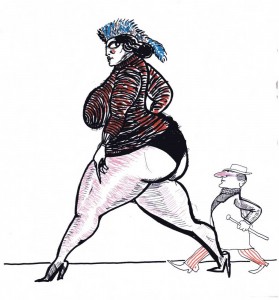 Fellini’s whimsical sketches are a high point of the show (the small screening space with a constant loop of his films seems anacronistic in this world of Netflix and streaming); the upstairs hall with works by contemporaries, including Hirst and Fabre, a jarring and largely uninspiring end. I suggest simply finishing your visit with the main hall, so you can leave the museum without having completely shaken off your floating, dreamy trance.

Il Teatro del Sogno: da Chagall a Fellini is being held at the Galleria Nazionale dell’Umbria in Perugia until 9 January, 2011.

PS: Take the time to visit the fetching main galleries of the museum as well, especial the clock tower room on the top floor.  In the gift shop, alongside the ubiquitous Botticelli printed notebooks and pencils, take a peek at the window displays showcasing wares from some of the best local artists and artisans.

By: Rebecca of Brigolante Guest Apartments in Umbria.