Pordenone is nesteled between mountains and rivers – now a major economic force, but in the 15th and 16th century, a rather sleepy place. The Friuli region may be one of the last bastions of less explored Italy. Here are a few of the things to see in Friuli and Pordenone. 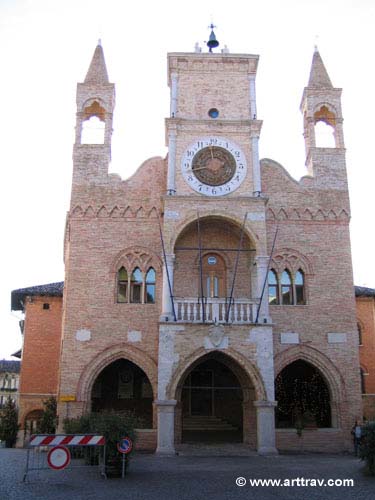 The people in Friuli are super friendly, and there are not many tourists, even fewer in the off-season. The food is excellent, and the visual arts range from charming to fascinating. In art history, Style developed differently in these godforesaken provinces than they did further south towards Florence.

The Friulian region has a particularly strong tradition of painting the facades of their palazzi. While this was also often the case in central italy, freak reasons of preservation seem to have shined on pordenone, where so many sixteenth century facades still show their colours. The houses shown here are all along Corso Vittorio Emmanuele, the main drag, which is porticoed. This makes it hard to notice them, so be sure to step out into the street (carefully!) to look up. 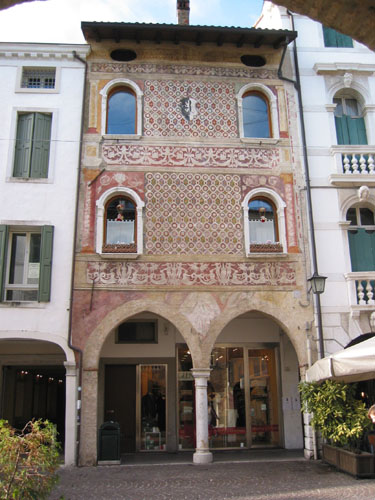 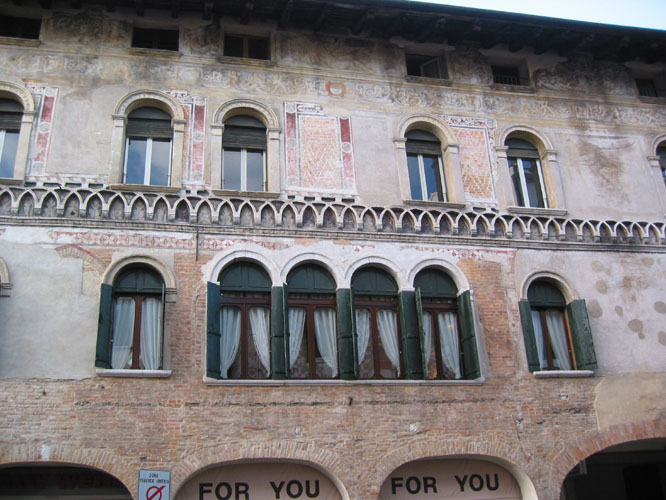 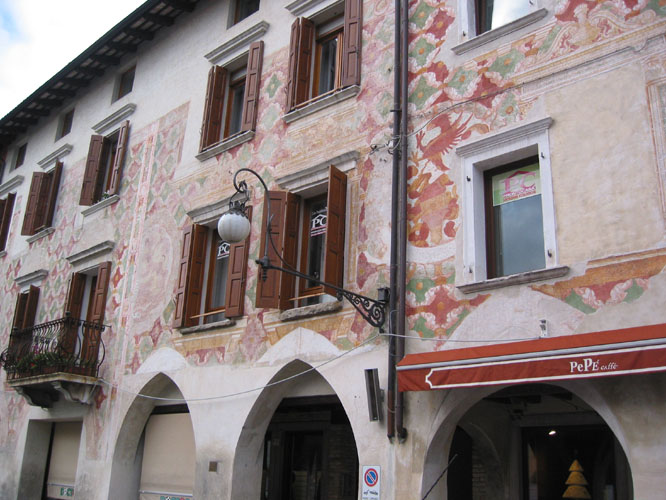 The artist Pordenone (Giovanni Antonio de Sacchis): works at the Duomo di san marco.
Perhaps the most famous resident of this city was the artist of the same name, who lived 1483-1539. Not well known to us today, not even to art historians, Pordenone is a really interesting artist, whose strong provincial roots and eclectic, individual style helped him receive important commissions not only in this region but beyond. He absorbed influences from all of Italy during his travels. His work is often illusionistic and powerful, and he sought out original solutions to old problems. To learn more aout this fascinating artist, you can read a short article interviewing the author of a recent monograph on Pordenone, my professor Charles Cohen. If you’re really into Pordenone, you might invest in his huge tome of a book: The Art of Giovanni Antonio da Pordenone 2 volumes

The altarpiece of St. Christopher in the Duomo is a typical work by Pordenone. St. Christopher, the patron saint of travellers who has recently been demoted by the Catholic church, is frequently found in the Friulian region. He was a giant who carried Christ on his shoulder in order to cross a river. Often he was painted on the exterior of country churches so that he could be seen from far by villagers. The problem with this giant, when it comes to painting, is that if you have to paint anyone else with him, it’s pretty hard to make him look like a giant, and yet paint the other people big enough to be worth your weight in canvas. 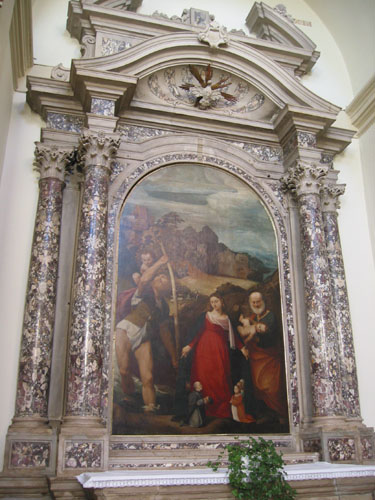 Altarpiece of St. Christopher, by Pordenone, in Duomo

Pordenone has a genial solution to this: he submerges the lower legs of the giant in the river, and adds a romantic sway to the body that helps lead the viewer’s eye inwards. Despite this modern solution, some aspects of this sixteenth century altarpiece are rather gothic. The Christ child is included twice — there he is also in Joseph’s arms. Furthermore, the Madonna della Misericordia format, where mary protects miniature donors in her cloak, had been abandoned in central italy for at least half a century. The facial types found in this work are typical of the region. As such, this work is exemplary of pordenone’s early work — modern yet in some ways “backward”, worldly and also provincial. 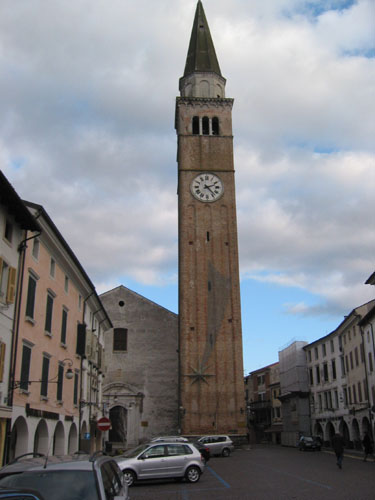 The Tagliamento is the river that divides this region east to west. Hence it seemed appropriate to stop in the sleepy town of San Vito al Tagliamento, at this important crossroads. Disappointingly, the river does not run anywhere near the historic centre of this town. The main square boasts an elegant belltower by our renaissance man, Pordenone himself. The clock tower stands independantly of the Duomo, which is decorated by frescoes by followers of Pordenone, including Pomponeo Amalteo, after whom a street here is named.

Hotel Ciasa de Gahja, Budoia (PN)
This hotel located some 15km from the city of Pordenone, near the air base of Aviano, is an excellent starting point from which to explore the region. We have been there twice. It’s a restored hunting lodge with quirky rooms, each one different from the other. Some are huge, some have antiques… There is a pool in the courtyard, perfect for a summer dip. They have a fancy restaurant, but i’d skip it in favour of the place listed below. Breakfast was good and plentiful. You can even order an omlette. I recall pigging out on cakes. 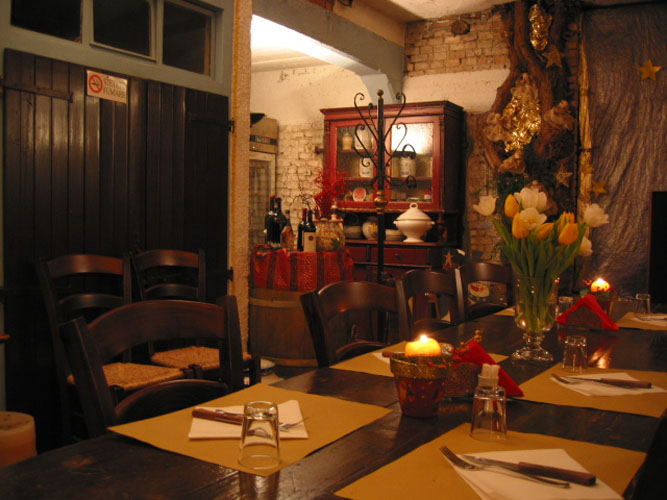 Osteria il Favri, San Giorgio della Richinvelda (Rauscedo, PN)
Via Borgo Meduna, 12 / tel 0427 94043
Closed Sunday and Wednesday
If you can find it, you can eat here!!! (call for directions). This slowfood locale served one of the best meals I’ve ever had. It helped to be starving, having gotten very lost trying to find this very small town, with this little restaurant in the middle of nowhere. Some of the roads were unpaved. But boy, was it worth it. In fact i’m thinking i’ll go back to this region just to eat here. 84 euros fed four hungry adults, and the boys had steak (2005 but I doubt they’ve raised their prices). The menu included friulian specialties of various sorts. All the primi were vegetarian. We had some excellent ravioli with a poppy seed butter sauce. The spinach crespelle were also very good. Salad was served with real aged balsamic vinegar (so thick it barely pours) and specialty oils; steak was served rare. The restaurant is also known for its excellent wine cellar. Now i’m hungry just writing about it.