A Gift from the Earth: Potatoes in the Alto Adige

Some harvests are more celebrated than others. Here in Tuscany, my September social stream was dominated by people handling grapes, rows and rows of ripe fruits destined to become wine. As we move into November, we’ll be seeing plenty of olives becoming liquid gold. But what of the potato? Nobody ever really fêtes the lowly spud. While various northern Italian communities have fairs that celebrate the potato harvest in the Fall, when have you ever seen pictures of the actual potato in the field, and the story of how it gets to your table? Well, now’s your chance, because I went to see the source of numerous potatoes in Italy. They may be a bit dirty but they are so delicious! 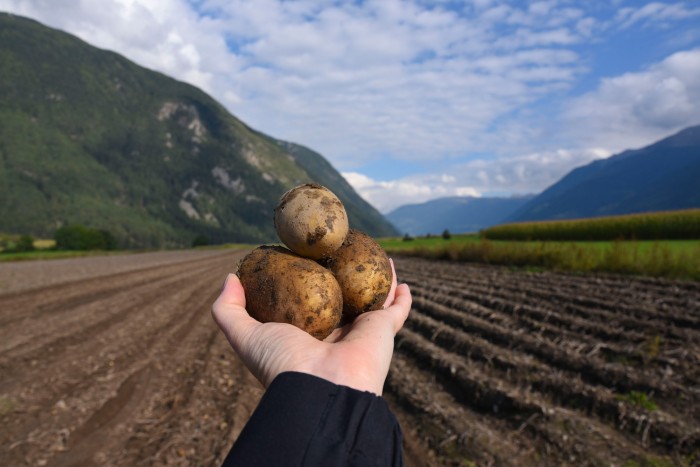 I went to see where potatoes come from.

I’m in the Val Pusteria, a green valley tucked between the Dolomites and the Austrian Alps. People speak more German here than Italian, and when they talk about going to University in the South, they mean Trent, not Naples. Potatoes here are a way of life, a staple much more than pasta in a diet that has much in common with its history as part of the Austro-Hungarian empire. To find out more about them, I contacted the largest Cooperative of potato farmers in the Alto Adige (FYI that’s the Cooperativa Produttori Sementi della Val Pusteria in Brunico / Bruneck). Here I learned that “not all potatoes are created equal” and figured out why some dishes I’ve attempted have failed – due to the wrong type of potatoes! In this mountain area, at about 600 meters or higher, growing potatoes is part of a long tradition, and the results are in the plate.

The end of September is when the potatoes were being harvested, and I may have been the only crazy tourist at the edge of a dusty field, observing the process. In part, this is because it’s not really all that pretty. But let’s start at the beginning. 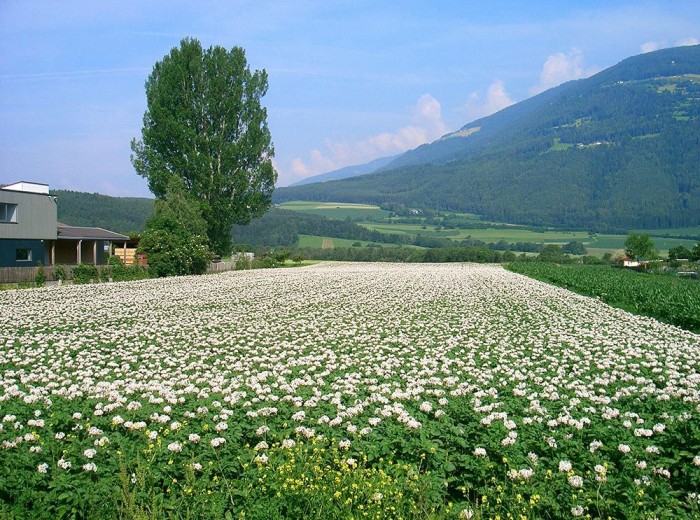 Potatoes are not planted from seed, but from seed potatoes: small, sprouted potatoes from the previous harvest. In Europe they are planted in a well drained field from mid April to mid May. These create leafy plants with pretty flowers that are white, pink or blue depending on the variety. After flowering, underground, the potato develops while the plant dies and dries up in about 6-8 weeks.

That’s why the field I saw looked just like rows of dirt – the plants, long gone, had left a few dried brown traces. But underneath, of course, are the potatoes, waiting to be unearthed. 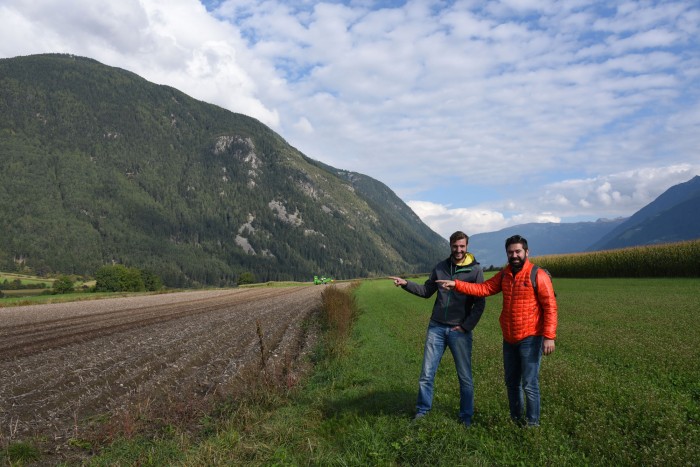 Tommaso and Artur pointing to the potato field like the crazy non-farmer tourists that we are!

A special machine does the job, with a team of men on it. Potatoes are dug up and sorted on the machine, with three men who ride along and exclude any spuds that don’t make the cut. Set aside in large containers, these are then picked up and brought to the cooperative for sale (unless you’re cultivating potatoes for your own personal purposes). 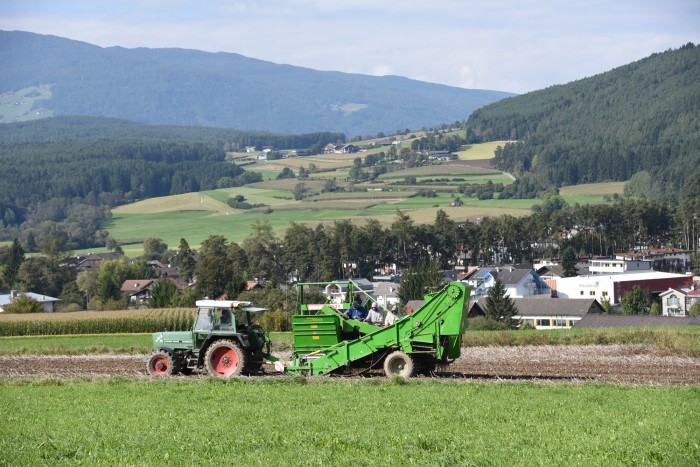 A closer look at the special harvest machine

Here, whole truckfuls go through a large and very dusty sorting room, where they are categorized by size as well as of course by type. The coop takes care of storing them so you can taste them fresh all year long. 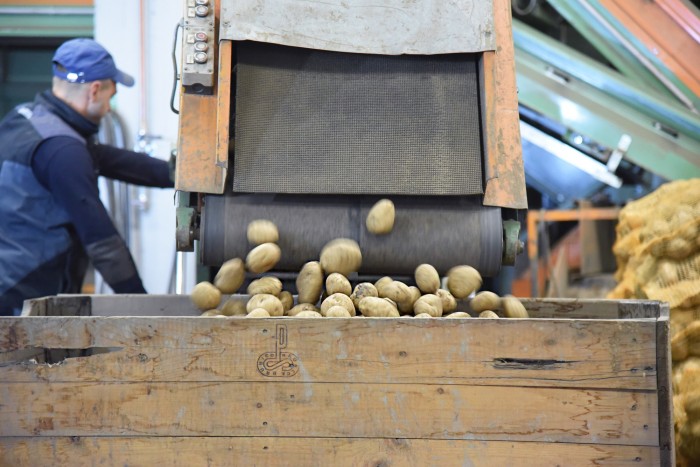 Sorting and storing – the job of the cooperative

Amongst the things I’ve recently learned about potatoes: 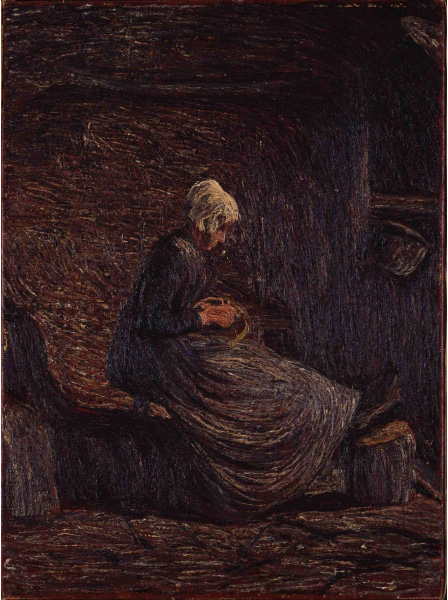 Often the inspiration for iconography north of the Alps, one of the very rare historical images of the use of potatoes in Italy is G. Segantini’s “The potato peeler”.

Nowadays, the potato tends to remain in the background, or at most, on the side of your plate. I’ve consumed the two kilos of potatoes I bought freshly unearthed in the Val Pusteria and I’ve got to say, there are plenty of reasons to better integrate them in my diet! The trick is to pick the right kind, and to get it fresh! 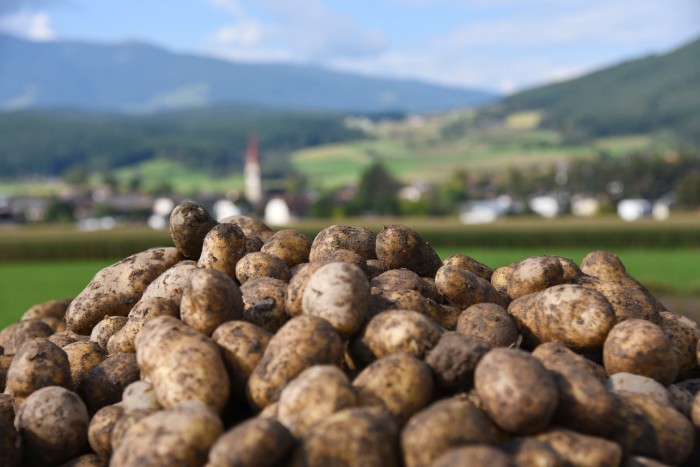 Potatoes in the foreground!

This month the Italy Blogging Roundtable (yup, we’re still at it!) decided to write about the Elements, and I’ve chosen potatoes as representative of the fruits of the Earth! My colleagues have chosen other elements and how they connect to their Italy experiences – check them out!