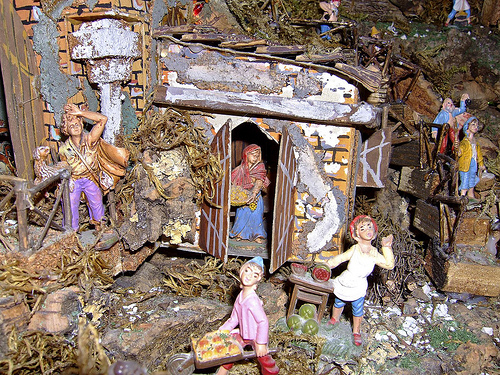 If one thinks of the words Christmas, Naples and traditions, the first things that come to mind are likely presepe (manger/crèche scenes)… closely followed by Christmas desserts such as the famous struffoli, roccoco’, mostaccioli, susamielli, sapienze, paste reali, divinamore. All of these traditional delicacies sweeten life in Naples during the holiday season. This article is dedicated more to the eyes than to the stomach: the history and composition of the Neapolitan presepe. 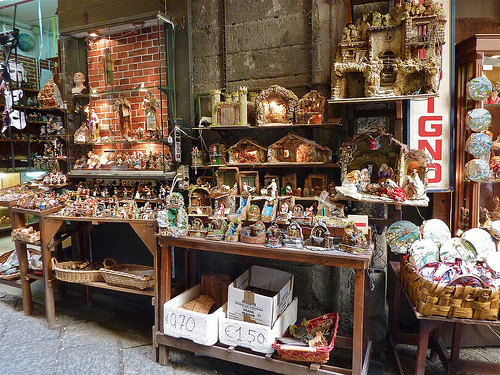 Strolling down Via San Gregorio Armeno in Naples’ ancient city center, even during other periods of the year, the artisinal workshops are hard at work. They are worth visiting not only for their lively displays but also to watch the artisans at work on the figurines for the upcoming Christmas season – clearly displaying their “Not Made in China” signs. This detail is their small way of asserting the authenticity of their manual traditions.

One might imagine that the presepe were born of a folk tradition but Neapolitans beg to differ. As the tradition goes, it was “invented” by Saint Francis of Assisi when he reenacted the Nativity using the local people of the town of Greccio (in the Lazio region) – transmitting devotion through emotional engagement. The cross over from this “living” crèche scene to an inanimate one was a short one – churches all over Italy soon started constructing life-sized presepe within dedicated chapels. In Naples, the churches of San Giovanni a Carbonara, San Domenico Maggiore, San’Eligio, Santa Chiara all housed early versions of the art form.

From religious to secular 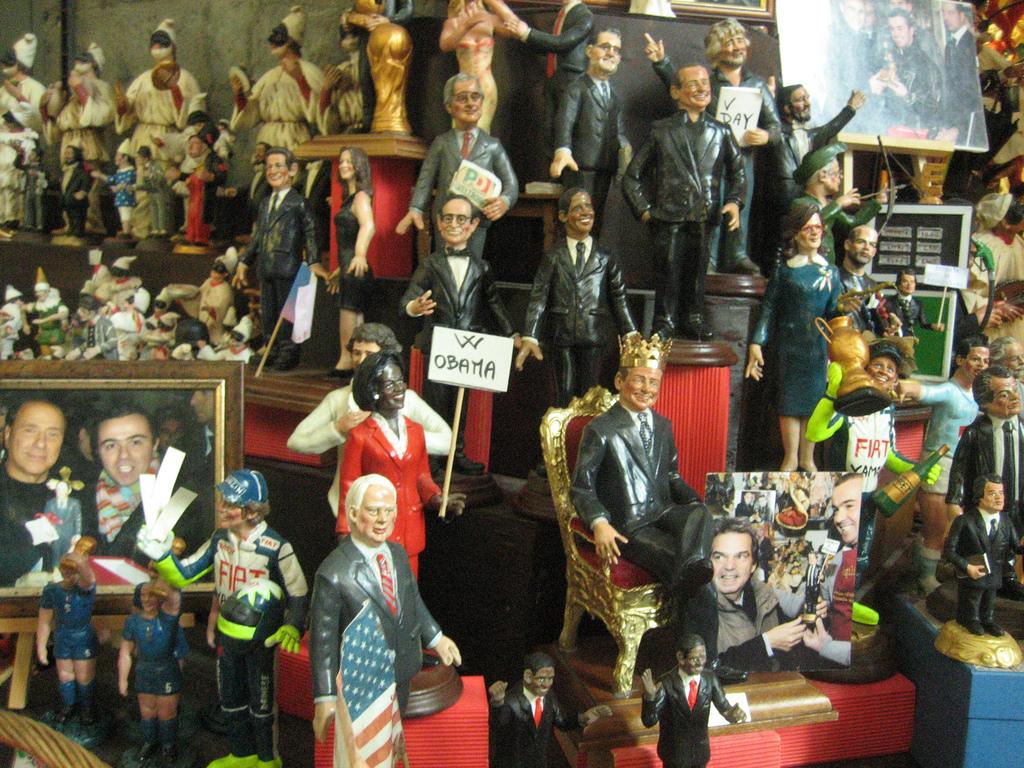 Thus, originally, the presepe was solely an ecclesiastical tradition, until the beginning of the 18th century when some die-hard “fans” turned it into an equally secular one. Legend has it that the Austrian viceroy visited the architect Giovan Battista Nauclerio in 1707 to view the spectacular “home version” that the architect constructed in his villa. One of the most significant episodes that contributed to the secularization of the presepe is attributed to King Charles III of Bourbon, the Spanish king who ruled Naples from 1734 to 1759. King Charles was so dedicated to the pastoral figurines that they quickly became a “must have” object for all middle-class Neapolitan families, who loved to mimic the customs of the royal family.

Over the years, the traditional Neapolitan presepe began to acquire greater and greater numbers of characters and props, which would then be grouped into individual “scenes.” The different scenes, usually three or four, would be arranged on an anchoring rock.

The traditional Nativity is always the central scene, with the Madonna, Joseph, ox and donkey, usually placed within a grotto. Of secondary importance was the evangelical scene, usually depicted in front of a backdrop of a pagan temple, which symbolically represented continuity from the Roman world, upon whose ruins Christianity was born. Or perhaps this ancient imagery is a reference to the excavations taking place during this era in Pompeii and Herculaneum. 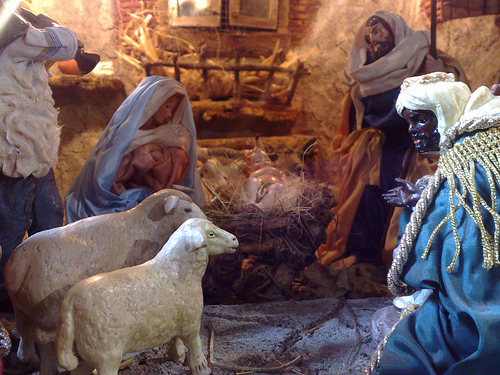 Next to the Nativity is the procession of the Magi, each one representing the three different continents known during Biblical times: Europe, Asia and Africa. Escorting the Three Kings with their gifts is a procession of musicians carrying “exotic” musical instruments and wearing clothing with Middle Eastern connotations. This procession is actually an homage to the Turkish convoy that visited Naples in 1741 and fascinated its inhabitants with its splendor, so much so that it was celebrated in all subsequent presepe scenes. 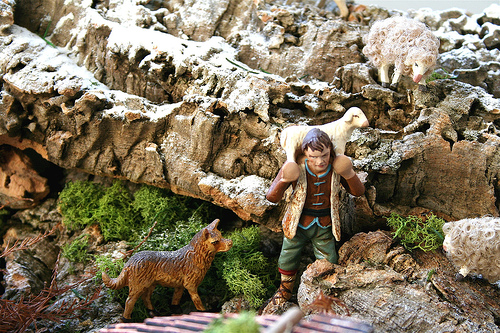 Next is the “Announcement to the shepherds” – an angel appears to let the common people know about the miraculous occasion. The last scene, perhaps the most elaborate of the Neapolitan presepe, is the osteria, or tavern, where Mary and Joseph vainly attempted to find shelter earlier that evening. Characters are seated at overflowing tables, hosts and hostesses serving various foodstuffs, card players, musicians, artisans working on their wares. The prespe is populated by “typical” figures, each with a symbolic meaning. There’s the sleeping pastor, Benito, the laundress, to the lactating woman, the “maccheroni-eaters”, who are excitedly eating pasta with their bare hands.

For those interested in seeing historic presepe, there are several places in Naples where they can be found. There’s an entire section of the San Martino Museum devoted to crèche figures and scenes, which is particularly rich and elaborate and where one can see figurines made by important artists like Giuseppe Sammartino, the creator of the “Veiled Christ” in the Cappella Sansevero. Other notable prespe on permanent display are in the cloister of Santa Chiara, in the Palatine Chapel of the Palazzo Reale and in the Reggia of Caserta.

Of the workshops that crowd the neighborhood of  San Gregorio Armeno, one particularly of note is “La Scarabattola” (Via dei Tribunali 50).