Only in Rome, and only on a centennial celebration such as this, the 500th anniversary of the death of Raphael, could it be possible to conceive an exhibition of more than one hundred autograph works by the great artist. This year’s celebration of the artist focuses on Rome, where he died at age 37 at the height of his fame; with only a limited number of works to go around, the Uffizi, Vatican, Louvre and many others agreed to lend major paintings and drawings; many will travel again later in the year to London’s National Gallery. The show, titled “Raphael, 1520-1483,” at the Scuderie del Quirinale is the real deal, containing only works by Raphael or directly connected to him (such as a print after his design), without the filler that so often characterises attempts at monographic exhibitions. This in itself is no small feat for a curator, and makes it worth coming to see the show if you can.

UPDATE: The show was open for just three days until it was closed due to the Coronavirus emergency. The following video was created by the museum as a “virtual tour”. It reopened with limited access, and extended the closing date, but tickets are all sold out (as of August 16). Meanwhile, below is my review and some “exclusive” photos taken just in time.

At the beginning of this year, I wrote about “Five Renaissance exhibitions in Italy worth traveling for in 2020,” and said that I’d certainly travel to Rome for this one. True to my word, despite the coronavirus scare (at the time restricted to Lombardy, to the best of our knowledge), I took the train down for the press preview, knowing that you, my readers, would want to know all about the show right away – especially if travel restrictions make it impossible for you to see it in person. We had limited time to see the show in a rather hectic environment and with numerous “distractions” (a cameraman had a heart attack, and the news of nation-wide school closures came in just as we entered), and I regret that I haven’t got a copy of the catalogue to provide additional information about works. What follows is thus the best possible “sneak peek” I can provide. This review is dedicated to Hasan Niyazi, whose passion for Raphael and for Italian art history still feels alive though he himself left us too soon, in 2013, with a sudden death at 37, just like his artistic idol. 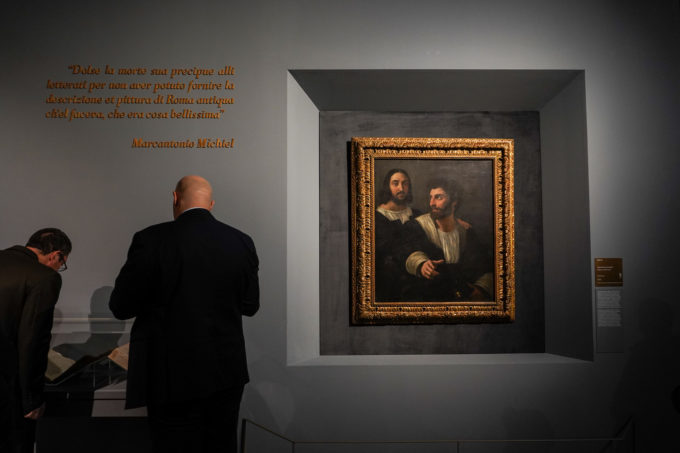 A view of the exhibition

Curators Marzia Faietti (Uffizi) and Matteo Lanfranconi (Scuderie del Quirinale) opted to present the life of Raphael starting with his death in 1520, which sent the whole of Rome into mourning. “This tightly packed flashback, starting from its creative zenith in the Rome of Pope Leo X, will enable the visitor to look back through Raphael’s life from masterpiece to masterpiece,” the wall text claims, “to follow the development of that Classical lexicon which, having been assimilated from the ancients, only in Rome flourished to an unprecedented degree.”

This beginning indeed shifts the focus of the show towards Rome, rather than on the artist’s early training in Perugia and Florence – a kind of way of claiming the artist for the place in which the show is taking place. It also may have a very practical function, as journalist Erica Firpo suggested to me, making way for large end-of-career works like the tapestries and a reproduction of his Pantheon tomb in the part of the museum space that has higher ceilings. 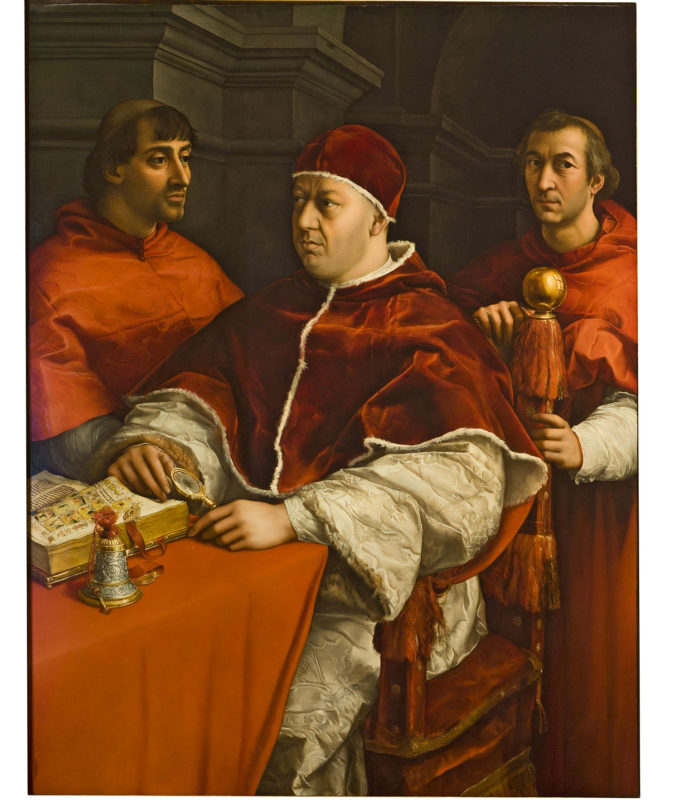 Raphael lived in Rome from 1509 to 1520, prolific years during which he served two very different popes (Julius II and Leo X), was chief architect of the Fabbrica di San Pietro (1514) and began an ambitious project to document and preserve the whole of Ancient Rome. The manuscript Letter to Leo X written by Raphael with his friend Baldassarre Castiglione and preserved in the Mantua state archive is displayed at the center of a room featuring the Uffizi Portrait of Leo X, the loan of which was so controversial that the Uffizi’s advisory team quit. [The team, headed up by Tommaso Montanari, had just established a number of “unmoveable” paintings and this was on it; the work has just undergone three years of fully-funded restoration that was part of the loan agreement.] 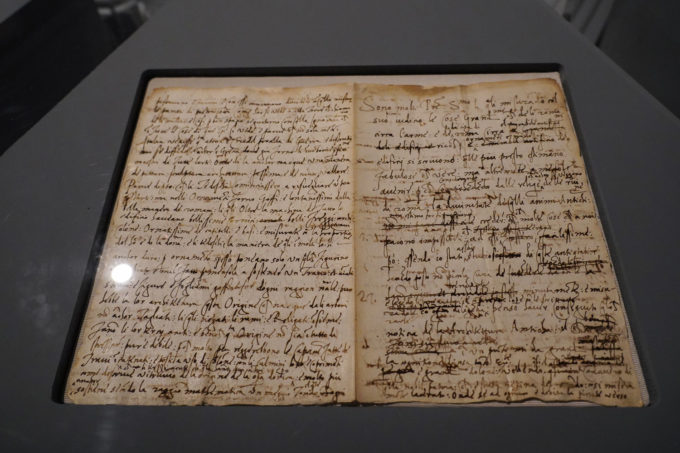 The Letter to Leo X

The letter to the pope, dating likely to 1519, was never sent, but outlines a desire to record and renew the city in a way that foreshadows modern cultural heritage policy. The letter describes a survey method hypothesized here in the show with a multimedia installation starting from the only extant drawings created at the start of the project: Antonio da Sangallo the Younger’s mapping of what is likely the Forum Transitorium and the Forum of Nerva.

What a time this must have been to live in! Imagine having a massive idea, collaborating with Castiglione for your “content production” to make sure it is eloquently proposed to the Medici Pope, and working with a few “friends who were good at drawing” on a massive mapping project that would not only map Rome, but change the way that everyone thought about both past and present. And while the project was just in its infancy, it was well enough known amongst the humanists in Raphael’s circle, mentioned for example by Marcantonio Michiel in a letter dated just five days after the artist’s death, with words that imply that he had seen it. The contextualization of this project, accompanied by a small free publication by Salvatore Settis, may be the exhibition’s greatest contribution to Raphael scholarship. 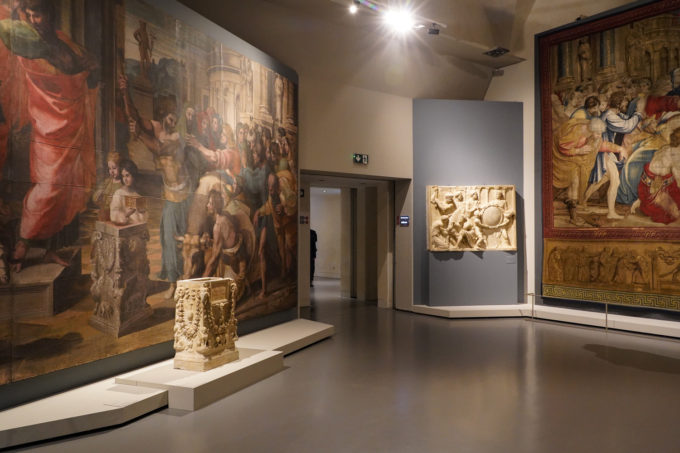 Tapestries and sculptures directly related to Raphael’s representations of the Ancient.

Working our way back in time in the next room, we see some of the commissions under Leo X; many workshop pieces that were sent around Italy, but also some massive cartoons and tapestries. Ancient art finds its way into the museum display, both in relation to the tapestries and alongside numerous drawings showing the artist’s increasing interest in the antique. 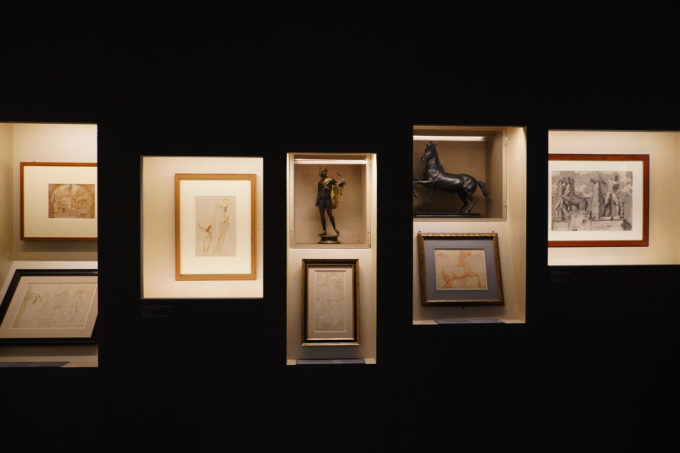 Raphael before Rome: Florence and the courts

We’ve reached the end of the first floor of the exhibition, which was a bit smaller than I expected. The paintings in this section are large and seem to play a scene-setting role, but they don’t excite me much. It’s time to head upstairs for a bit more sprezzatura. 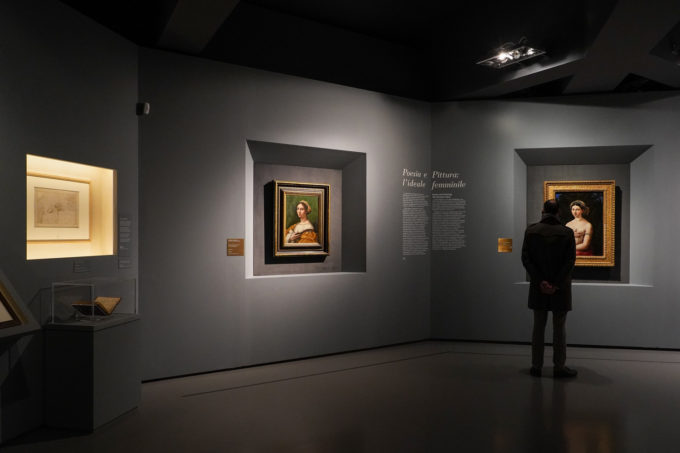 This was my favourite room

I gasped when I saw the three female portraits that make up the section dedicated to the ideal woman – La Velata (Uffizi), La Fornarina (Palazzo Barberini), and Raphael and Giulio Roman’s Strasbourg Portrait of a young woman (who is believed to be the same sitter as the Fornarina). Their gazes are arresting, and seem to me so very specific and real although I know that they are idealized. To me, certain Vatican frescoes aside, these portraits are the best of Raphael. Colour, mass, plasticity and a certain psychological depth are present here in a way that, personally, I don’t perceive at other moments of Raphael’s career. 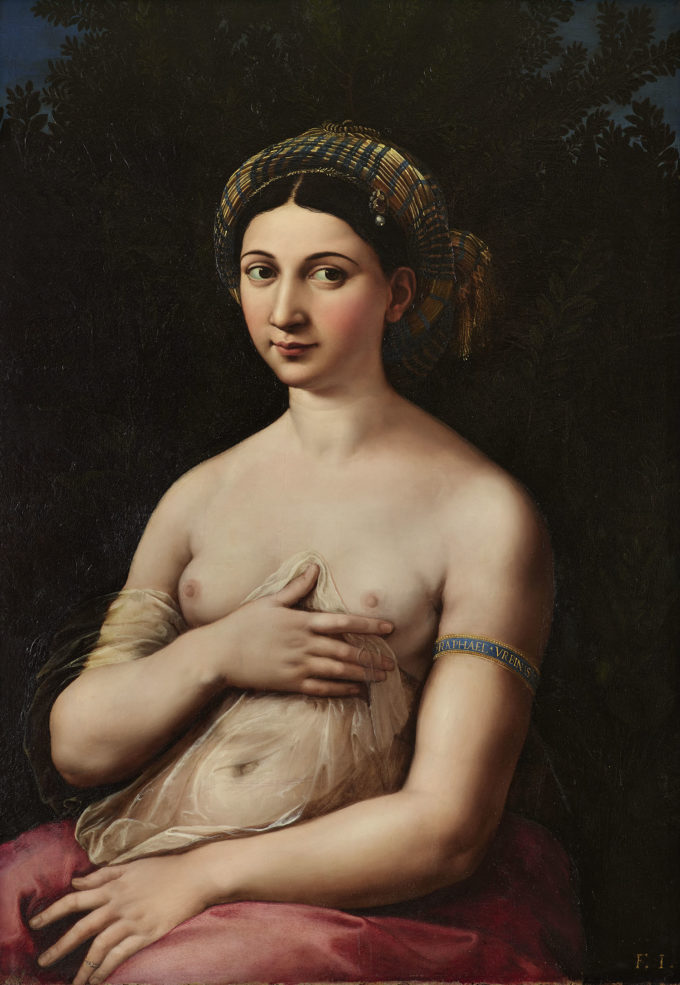 As the exhibition proceeds, we continue to step back through time, first with a section dedicated to his work as an architect and finally to the artist’s learning experience in Florence. He turned to the lessons of the Renaissance city in 1505, though he was already familiar with Florentine art certainly in the years of his collaboration with Perugino, and when he worked in Siena alongside Pinturicchio. Conspicuously missing here, in my opinion, are two works that embody Raphael’s Florentine period: the Madonna del Prato of 1506 (Vienna) and the Borghese Deposition of 1507. The artist’s youth is however well represented with the Dama con il liocorno (Borghese Gallery, 1506), two courtly portraits and the Vision of a Knight on loan from London’s National Gallery (1504 circa). 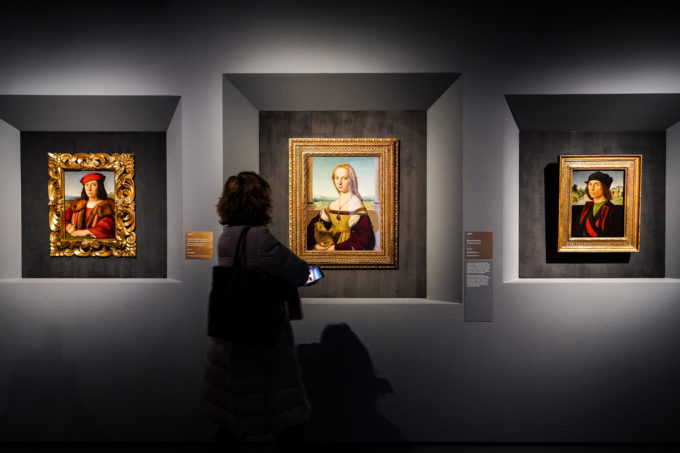 Woman with a Unicorn and other works in museum display

Conclusions: what is so special about Raphael?

A good friend of mine saw that I was going down to Rome to report on this exhibition and she asked me “what is so special about Raphael, anyway?”. Saying she didn’t really “get him” reflects a wider feeling that I’ve observed about this artist. In a 2014 article in honour of Raphael’s birthday and Hasan’s memory, I addressed the issue of the modern reception of Raphael. What I found was that reception is not stable over time. Some of the things we appreciate about Rapahel nowadays are the same as those cited positively by his near-contemporaries (such as his incredible capacity for disegno, or composition), while some of our issues with the artist reflect those noted already by 17th-century critics. 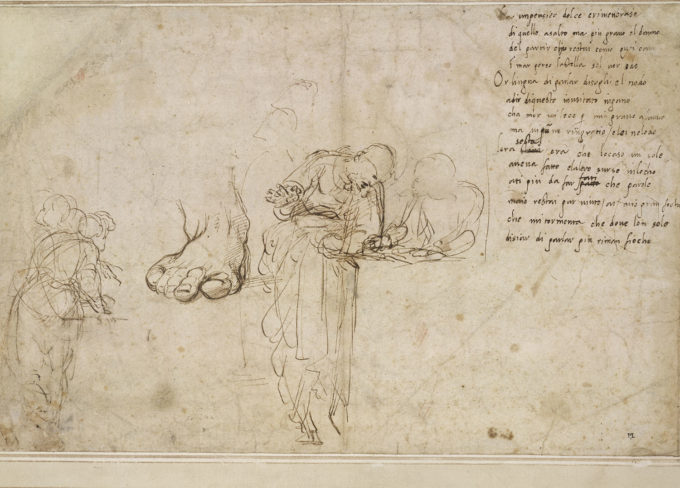 Sonnet & studies for the Disputation of the Holy Sacrament | Courtesy London, British Museum

What conspires through this quincentenary review of Raphael’s oeuvre is the vastness of his area of competence and his incredible skill, even perfection, in every area of the arts. There is even a sonnet alongside a study for the Disputà (British Museum), although I’m no judge of its quality. A true “Renaissance Man,” Raphael was not just a painter but an architect, poet, draughtsman, and both mirror and influencer of his time. This perfection may be off-putting for the modern viewer. Art historian Ben Street, in our 2014 correspondence, explained our inability to fully grasp Raphael in relation to his “pictorial intelligence” (borrowing the term from Baxendall and Alpers), and I think he sums it up perfectly:

Looking at Raphael is a way of communing with a fearsomely acute mind at work in an extraordinarily refined hand. It isn’t about skill. It isn’t about ‘harmony’, or ‘beauty’, or any of that stuff you read in wall labels. It isn’t about sweetness, although his work can be sweet in a direct and startling way (see the Madonna della Seggiola). It’s about an intelligence that finds its voice in inextricable relationships of colour, line and light. This kind of intelligence is very hard, perhaps impossible, to discuss in words, making his work, like Tiepolo’s, a difficult task for art historians, who like to talk about patrons, iconography, context – all of the things, basically, that are outside of this particular intelligence. Imagine talking about these things in relation to La Donna Velata (I tried to do this recently, and became tongue tied) and you see the absurdity. It’s all there in the paint. There is nothing outside of it.

Looking at Raphael is simply not easy. This exhibition can be taken in at various levels. Come to see the autograph works from collections around Europe and beyond, and take the time to look closely – especially at the drawings – and to make your own comparisons between some of the exceptional pieces. What you learn about Raphael from this experience may be more influenced by your interior state of mind than by the curators’ choices. 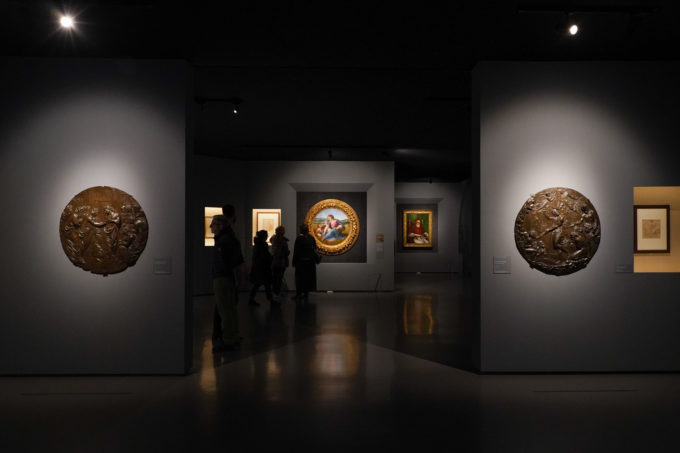