The books that made Renaissance Venice: if Aldo Manuzio were on Kickstarter

I’ve been really busy at work lately, preparing two crowdfunding projects – one for a more technological client, another for something in the arts field. Are you familiar with Kickstarter and Indiegogo? It’s where people present projects – sometimes they’re products, sometimes they’re just wild ideas – and you support them by giving money in exchange for rewards, which might be the product in pre-sales, or that require a minimum order so it can be produced.

In the midst of this, I managed to get away for literally one day to Venice. Accompanied by foodie resident Jonelle, aka Rambling Epicure, we went to see the new exhibition at the Accademia: Aldo Manunzio, il Rinascimento di Venezia, which I’d identified as the one show amongst those listed here that I’d actually travel to go see. Why? Well, first of all because although I studied in Florence, and my dissertation actually focuses on a lot of prints from Rome, Venetian art may be my favourite of all Renaissance Italian art. Second, because I’m a print geek, both when it comes to printed images and with regards to printed books. And Aldo Manuzio, he’s the guy who basically invented the concept of the printing house. But few people who aren’t experts in Renaissance art have ever heard of him – which is why it’s nice that now, visitors to the Accademia will have a chance to get to know how important he was.

With my brain on crowdfunding right now, I got to thinking: what would it look like if Aldo Manuzio pitched his project on Kickstarter? What follows is a modern day adaptation of the publisher’s achievements that one learns about in the exhibition, written in the language of a crowdfunding project. 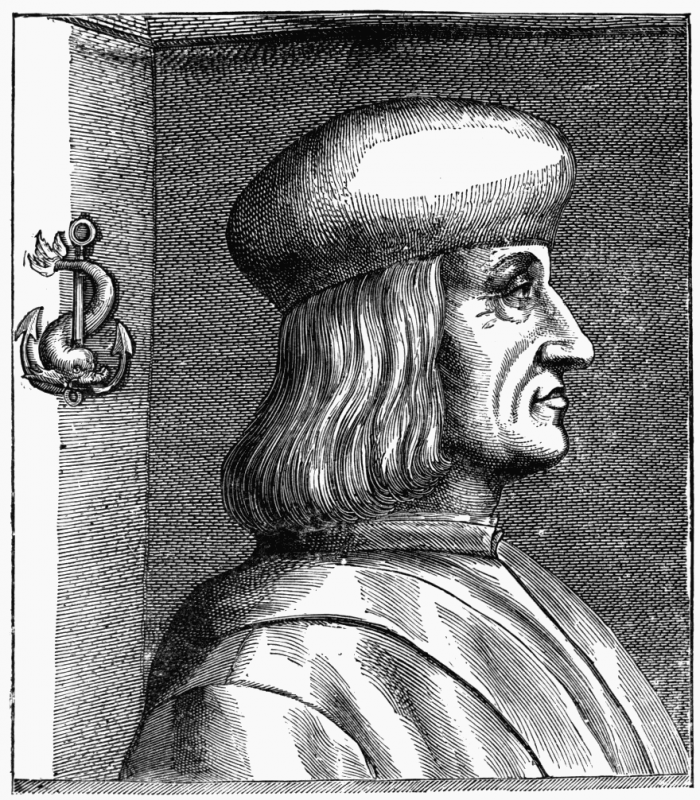 Hi, my name is Aldo Manuzio. I was born in 1449 in Lazio, in a small town you’ve probably never heard of. I was fortunate to go to school in Rome, where I studied Latin under Domizio Calderini, and then in Ferrara to learn Greek under Battista Guarini. After beginning my career as a tutor, moving around humanist courts, I recently moved to Venice (in 1489), where I’ve developed a printing project that I think will change the world.

I’m launching this project here on Kickstarter because if I can’t get your support through pre-order of my books, I’m going to have to ask my girlfriend’s father to back my printing house – he’s a bit stingy, and I’ll end up having to marry his daughter.

My Greek and Latin project

My revolutionary project starts with the idea that both Greek and Latin classics should be studied in their original language. To this aim, I’m collecting a list of texts that I believe we should be studying, but also, thanks to my experience as a humanist pedagogue, I’ve prepared a grammar primer with Greek and Latin facing texts to help those who only have Latin to discover the beauty of Greek. This is part of a current trend: my friend, sculptor Tullio Lombardo, is restoring the Greek style in his art, while I will restore Greek in literature. 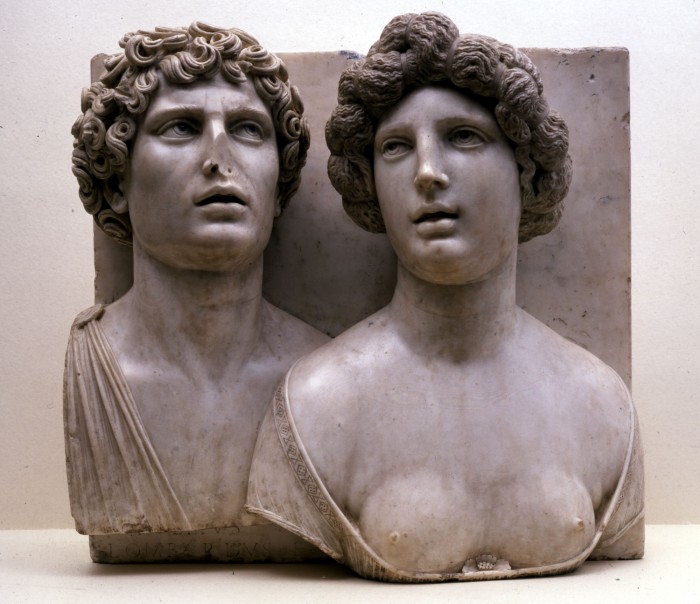 Some of the Greek texts that I’ve discovered and intend to print for your edification are works of idyllic poetry, stories that make us Venetians, in particular, look at nature in an entirely different way. There is a young artist named Giorgione – you’ll surely hear of him in a few years – who has had a sneak preview of some of these texts, and he says they are really inspiring.

In addition to Greek classics, I’ve developed a publication plan for “modern classics”. One will be a large scale book with innovative printing (see below), while others will be a brand new concept of “pocket books”, texts to carry in the folds of your robe, so attractive and stylish that you’ll want to have your portrait painted with them.

1499 seems like a long way away, but it’s going to take me a few years to lay out what will be the most beautiful book ever printed – and I need your help, by funding this project, so that I can get started on this fascinating book. It’s the story of a guy who wanders around in a dream world, it’s full of obscure imagery and symbolism, and the language is a tad bit difficult for many readers, but I believe it’s a good investment. Anyone who has ever experienced insomnia will want to read this book. My plan is to make the way the text is laid out an integral part of the way the content is communicated. The book has a tongue-twister of a title: Hypnerotomachia Poliphli; one of the top rewards in this Kickstarter campaign is the privilege of renaming this book as you wish. 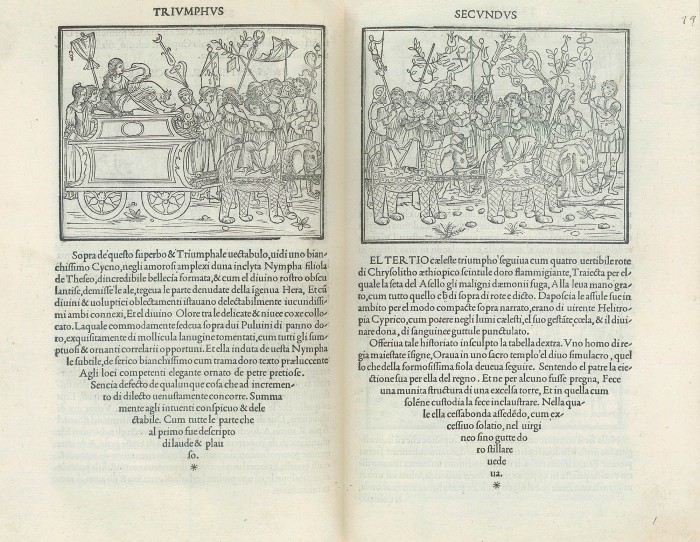 Page from the forthcoming Hypnerotomachia Poliphli

Beyond layout and integrating woodcut images in texts, I also look forward to printing on coloured paper. Nobody has done this yet, and my goal is to print a book entirely on blue paper, with black ink, by 1514. The ideal text for this is Libri de Re Rustica, which is one of the stretch goals of this campaign. 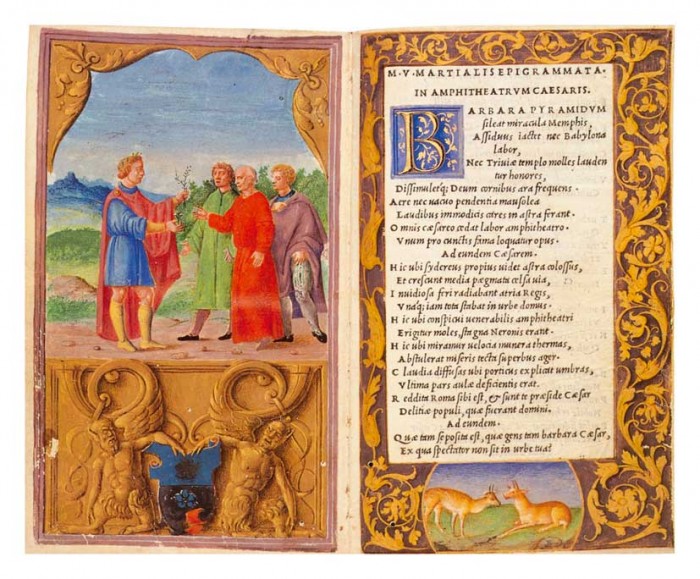 As with any project, I’m not just going at this alone. Francesco Griffo is an exceptional typecutter and he has invented the world’s first Italic typeface to work on our press. My friend Pietro Bembo will be editing a number of modern classics that are sure to become bestsellers. For the more luxurious projects, we’ve partnered with illuminators who have years of experience in the old world of manuscripts, who have agreed to work on our printed editions – in particular Benedetto Bordon, whose detailed and colourful drawings will up the value of our products with collectors.

Initial financial backing comes from the aforementioned future father in law, Andrea Torresani di Asola, who also has decades of printing experience under his belt.

The book project on Kickstarter – rewards 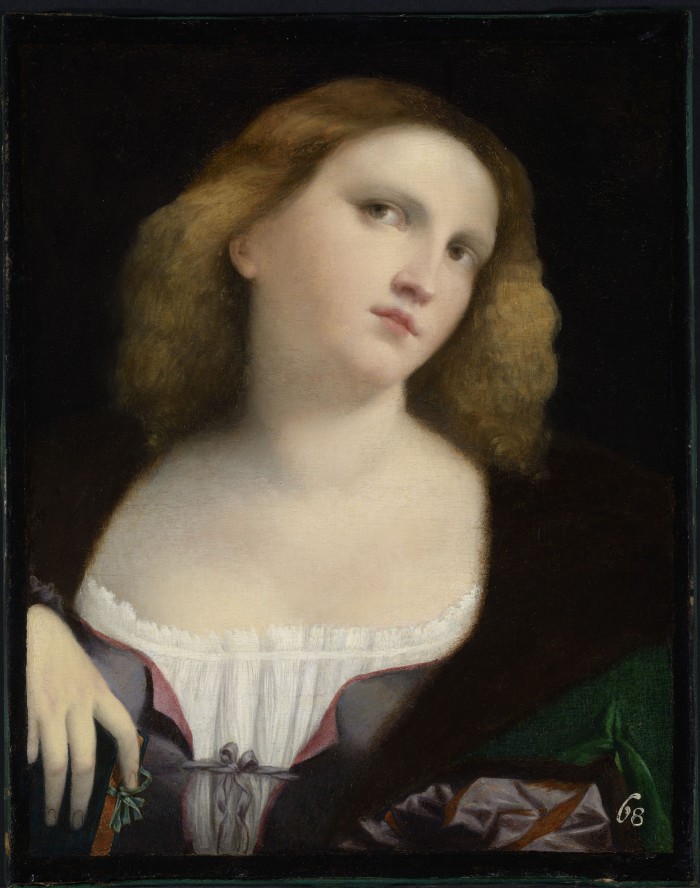 Every crowdfunding project comes with rewards for backers. These are a few that we’ve developed so far.

**Durer reportedly paid this amount for the book in 1507 (source)