The 5 most scenic train trips in Italy

The idea of cruising through the sunflower fields of Tuscany in an convertible Alfa Romeo or bumping down the cobbled streets of Rome on a Vespa have a long been held up as some of the most romantic ways to explore Italy. But if you’re not a fan of parking in strange countries and you don’t have a death wish, the train might be a better option (hey, it’s also environmentally sound).

Indeed, why not travel by train? The great travel writer Paul Theroux famously wrote: “I have seldom heard a train go by and not wished I was on it.” Both practical and something of a way of life, train travel offers not only comfort but some impressive views. Here then, are five of the most scenic train trips in Italy. 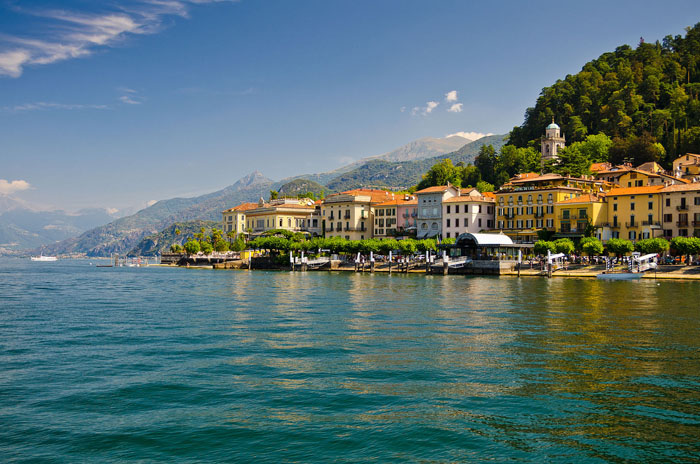 Bedecked with students and stylists, Milan is the country’s most fashionable city, as well as hosting a score of grandiose architectural delights. Just 40 kilometres away is the town of Como, one of the most popular places to visit in the province of Lombardy. Throughout the journey the mountains remain visible in the distance as the local train rambles through the rolling green countryside. The town is situated on the banks of the glistening Lake Como and has become a quasi St. Tropez.

Many Tuscan towns have the inconvenience of being atop a hill, meaning that after one disembarks one must climb up on two feet or wait for a bus. Not so in Prato, where the regional train from Florence will take you right into the centre. Prato was also a hub for Renaissance art and today exhibits fine exemplars without the mobs of tourists buzzing around them, like the frescoes by Lippi in the Duomo’s high chapel. Prato is also the birthplace of the ‘Cantuccio di Prato’, the double-baked biscuit which is often dipped in sweet wine or coffee. The short train ride (from 20-40 minutes depending on the stops) offers some greenery and some interesting industrial scenery like in the photo above. (Have a look at other easy train trips from Florence here.)

Along the Cinque Terre 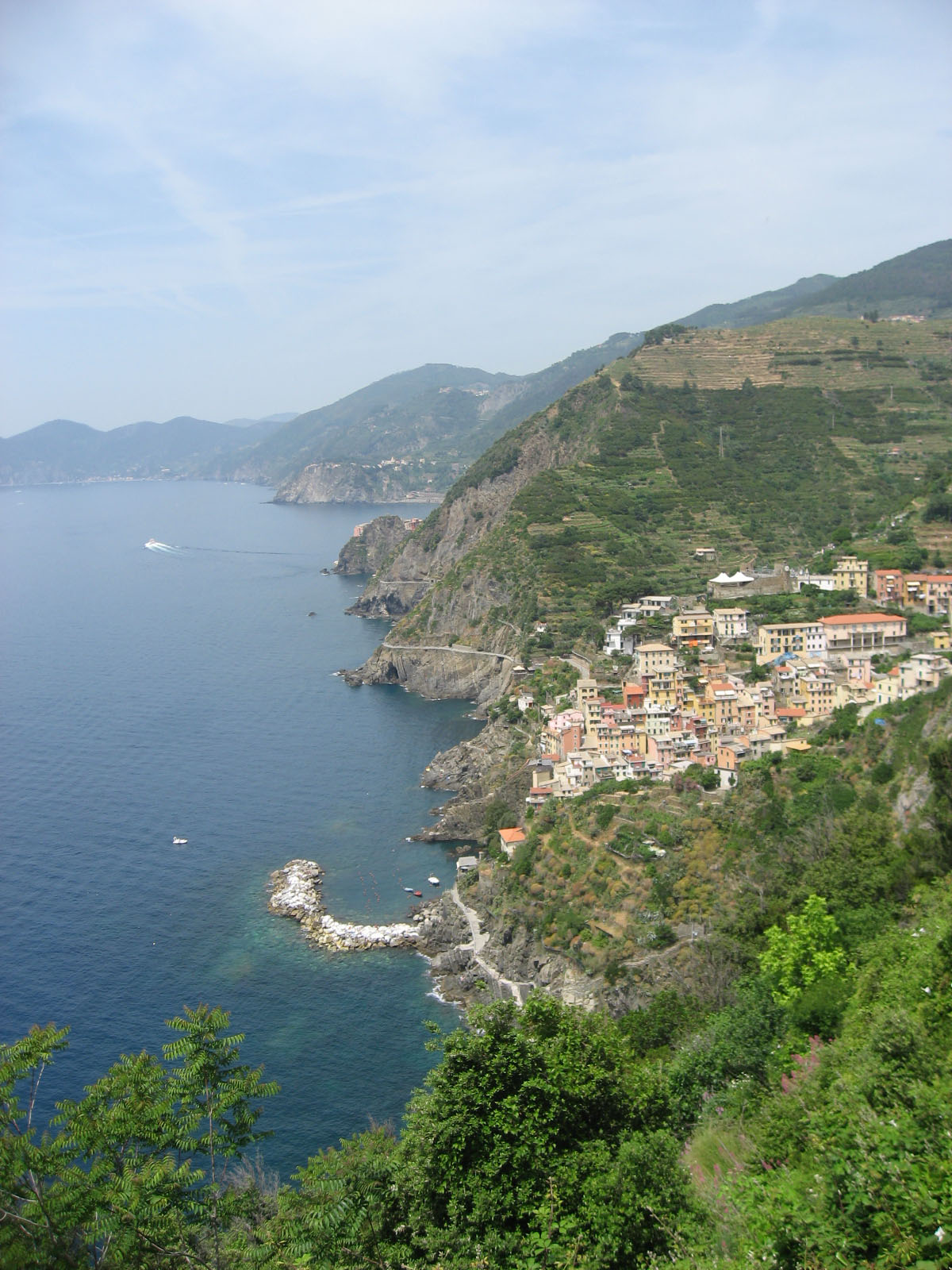 Coast towns of the Cinque Terre

The Cinque Terre, the ‘Five Towns’, are situated on the Italian coast of the Ligurian Sea and are an ideal place to stop for the night for those traveling from Italy towards the French border. The Cinque Terre are really five villages, all situated directly on the sea, with brightly coloured buildings and cobbled roads branching off the steep central high street. The train tracks lay along the coast with startling azure views, save for when luscious foliage creeps up over the tracks or when going through tunnels. 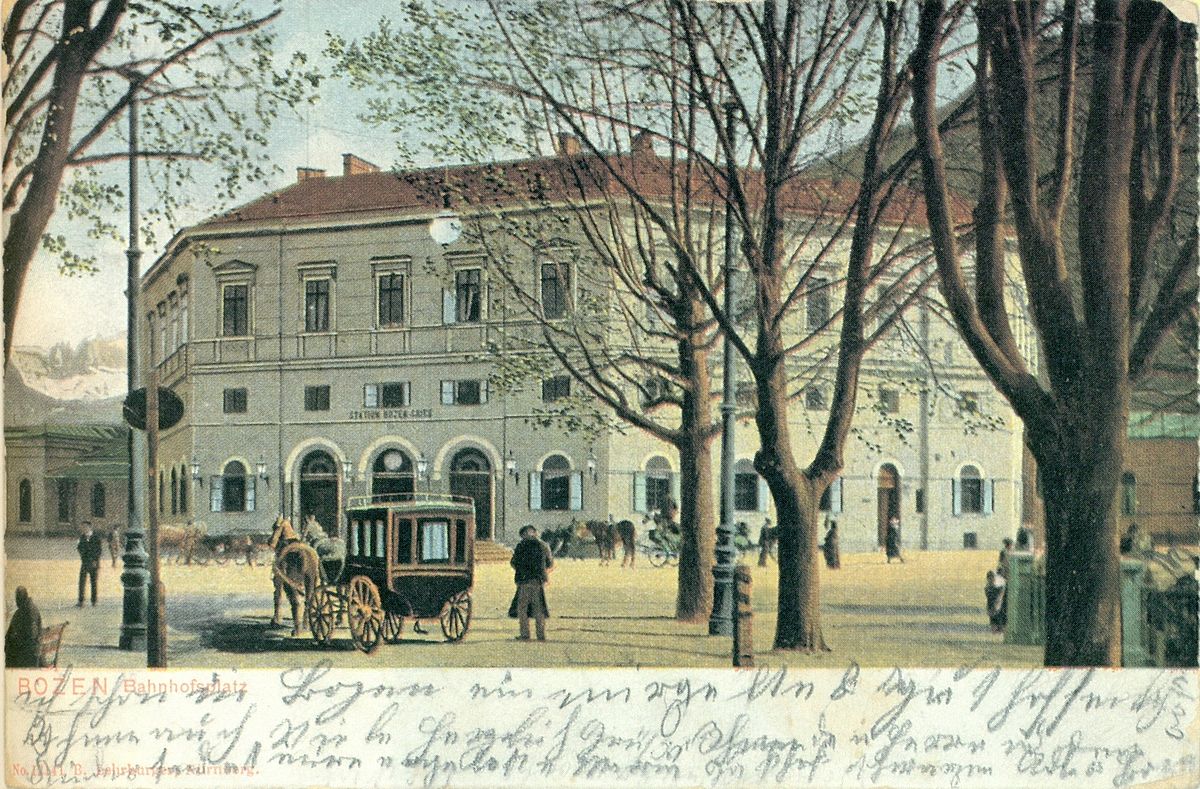 From Bologna, just beyond the Appenine mountains from Tuscany, one can take the train over the plains and then through the mountains to Bolzano. For a long time Bolzano has been the centre of commerce between Italy and Austria. This means that not only is the town a heady mix of Austrian Alpine culture with that of the Mediterranean, but it also acts a gateway for many of the north heading south on holiday. Therefore your train compartment may well offer the amicable company of rosy-cheeked and beaming Austrians from over the border, diligently consulting their travel guides with fanny-packs strapped tightly around their wastes. Before the Christmas season, Bolzano is the location of perhaps the most popular Christmas market in Italy, and the town’s train station is just two minutes’ walk away from piazza Walther, where the market begins! 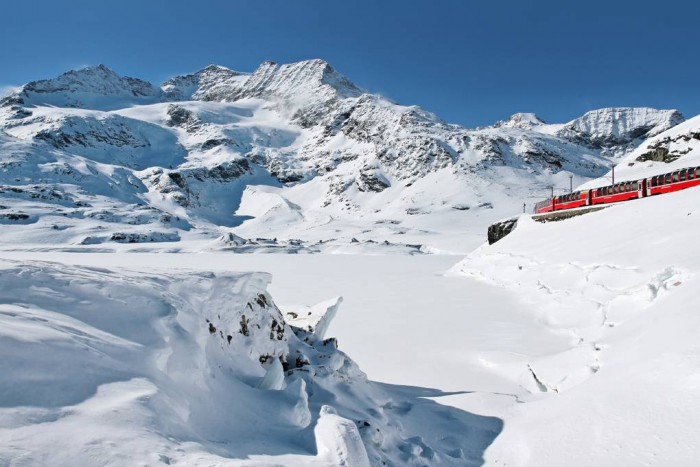 A train through mountains! The Bernina Express | Photo www.rhb.ch click for link

The delectably named ‘Bernina Express‘ takes passengers on the ‘red train’ from the station of Tirano in Sondrio over the border into St Moritz in Switzerland. The journey takes roughly three hours and rises to an altitude of 2, 256 feet(!) As well as rivers and cultivated fields, passengers will be able to goggle out the window at icy slopes and antiquated viaducts. In Tirano travelers can visit the church Madonna di Tirano built in 1505, and in St Moritz one can embark upon the winter sports for which the town is so famous for.

Those keen to explore Italy on rails will be gratified to know that the country’s train system is comprehensive (especially north of Rome), sometimes efficient and more often than not will offer a catering car and complimentary wi-fi that occasionally works. The two principal train companies are Trenitalia (trenitalia.it) and Italo (italotreno.com): the former covers the majority of routes throughout the country while the later offers solely high-speed connections between the Italy’s largest cities. Choosing the best route and rate can be a challenge switching between sites, so we recommend using GoEuro to find the cheapest and most efficient routes throughout the country.

Theroux writes, “anything is possible on a train: a great meal, a binge, a visit from card players, an intrigue, a good night’s sleep, and strangers’ monologues framed like Russian short stories.” The modern train rider might translate this romantic thought into a smorgasbord of people watching and listening in on cell-phone talks, but there’s still room for adventure on the train if you want… and how could anyone say no to all that?

Currently living between Berlin and Yangon, reading and writing, and learning and eating.