It’s a Saturday morning in Rome, one the first days of spring. I am to meet a man at 9:30 am at a certain Bar Carra, just outside a peripheral subway station. Giorgio describes himself in an email as “tall and dark, with a piercing in my nose, one long braid, mustache and goatee”. I silently thank my acquaintance Jessica for having set up this meeting. As I survey the assortment of men with piercings in the bar that morning, wondering which is to be our street art tour guide, I think I’m rather glad I’ve brought along my husband. Giorgio shows up, not at all as threateningly handsome as he describes himself, and he immediately breaks into a story about the Quadraro neighbourhood and its street art movement. 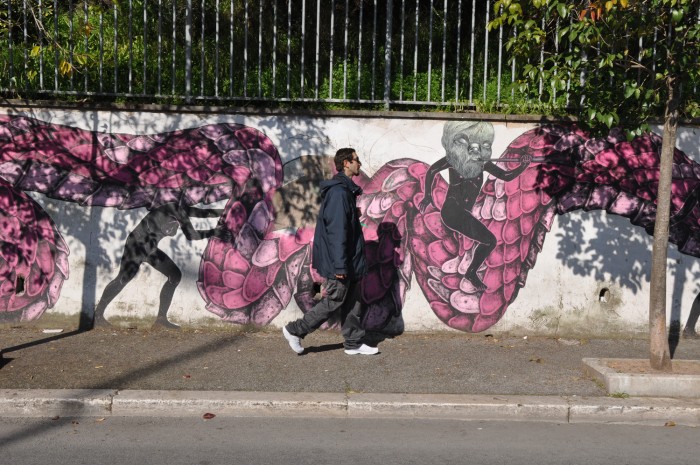 Can art consolidate a community and better a neighbourhood? In Quadraro, a quartiere popolare or working class area of Rome, an experiment in street art is doing just that. The MURO Urban Art Museum of Rome is an open-air, free-to-access itinerary of socially relevant murals painted by local and international artists. Founded in 2010, it’s the first project of its sort in the Italian Capital. This spring, the City of Rome has released an official street art map that lists over 330 works including those in Quadraro, a recognition of the power of street art both for community building and for tourism.

Giorgio is the spokesperson and official tour guide of MURO. He’s not a street artist himself, but more of a helper or facilitator. He gets the stories of works and their creation directly from the artists, often hosting those from outside Rome in his own apartment. As we stop to admire some of the first murals painted in Quadraro in 2010, he waves hello to a man in a car who turns out to be David “Diavù” Vecchiato, the founder and curator of the MURO project. On a long wall below via dei Lentuli, that separates a main thoroughway from the smaller streets of this quartiere, Diavù has painted “Art Pollinates Quadraro”; if you think it looks like cartoon spermatozoa, you’d be right: it’s a statement on the fecundity of art.

Quadraro has a difficult but proud history, and it’s one that Diavù and the cultural association of MURO want to bring to the forefront through visual interventions. South-East of the centre, it borders on Cinecittà and was developed in the first years of the 1900s, but saw particular growth before the second World War. During that war, this poor and overcrowded area was an important part of the Resistance, housing numerous active anti-Fascists, and thus was referred to by the Germans as a “wasps’ nest”. On April 17, 1944, German troops conducted a blitz on the area, taking away almost 1000 men, of which fewer than half returned. The area was awarded a gold medal for civil merit. 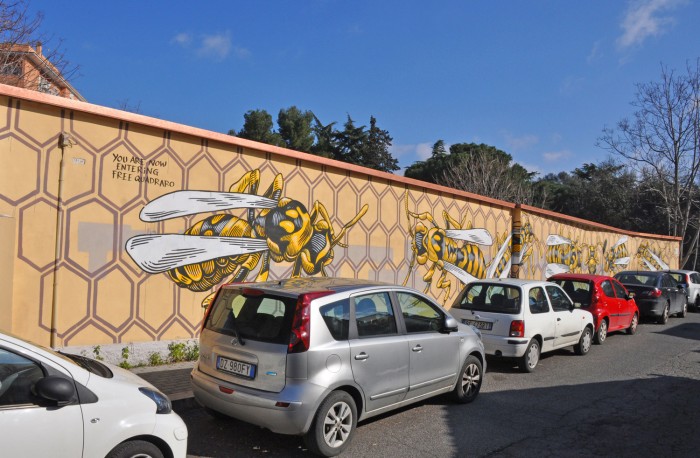 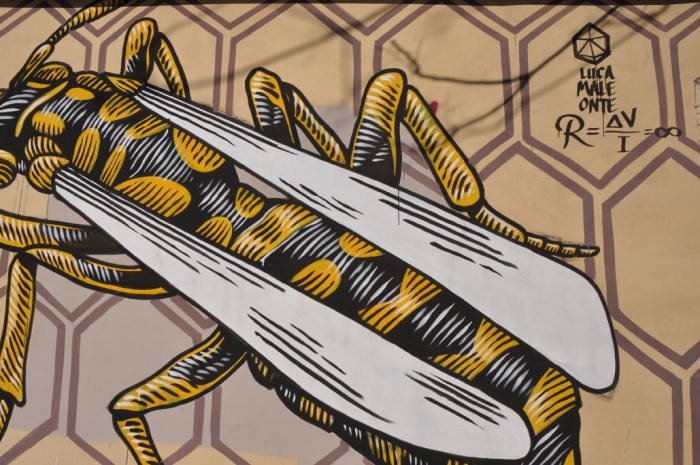 Nido di Vespe, detail, Lucamaleonte. Geeks may notice the symbol and formula detailed here, which is Ohm’s law: in this case, the resistance is infinite.

The “Nido di Vespe” is referred to literally in the beautiful, impactful wall painted by Lucamaleonte on Via del Monte del Grano. Diavù commissioned the work on a large private wall (the owner was happy to give his permission), and explains that this wall represents an entry into the area of Quadraro vecchio, that until as recently as the 1970s was a kind of ghetto, with unpaved streets and improvised huts inhabited by immigrants. “This wall is intended to symbolize the resistance of this area, recognized by a medal of valour because it submitted to that terrible deportation but remained strong to its values of liberty. Nobody ever played the spy, they preferred to die in the concentration camps,” states Diavù. 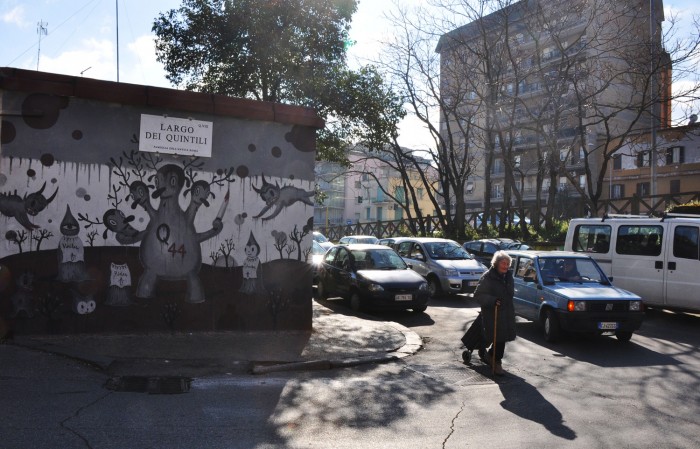 A small wall between the big wasps and the fecundating art also speaks of this story, but from the personal perspective of Gary Baseman, LA street artist and Emmy-award winning Disney cartoonist. The mural was made for the annual celebrations that remember the deportation of April 17 1944. Having heard the story, Baseman, of Jewish origin, used his round puppet-like figures to conjur up his own family history’s – his father was a partisan in Poland. 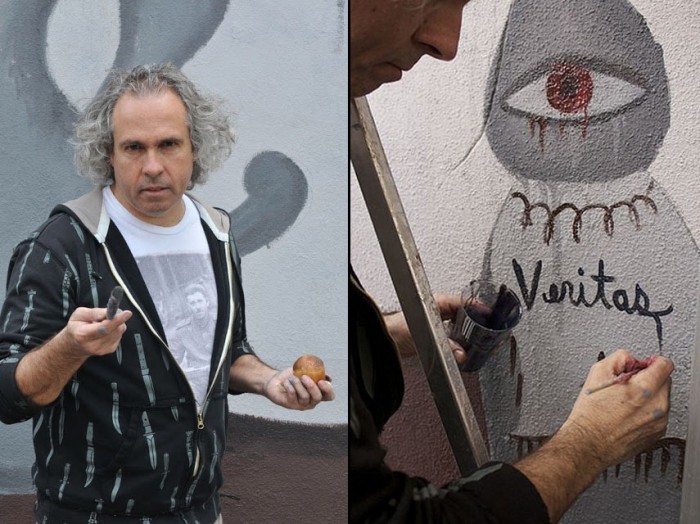 Stories of the past, but also references to the present… one of the few works by a female artist, Gio Pistone has pained a protective monster that guards the entrance to a tunnel that separates Quadraro from the next area over. This tunnel was dirty, full of needles, and inhabited by a man whom locals have taken to caring for – providing him with a mattress, and making sure the tunnel gets cleaned up and is safe. 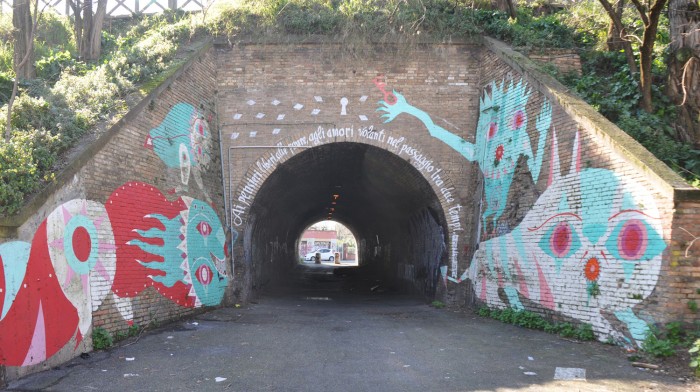 Its exit is painted by Mr. Thoms with a gigantic mouth that sucks in everything around it. 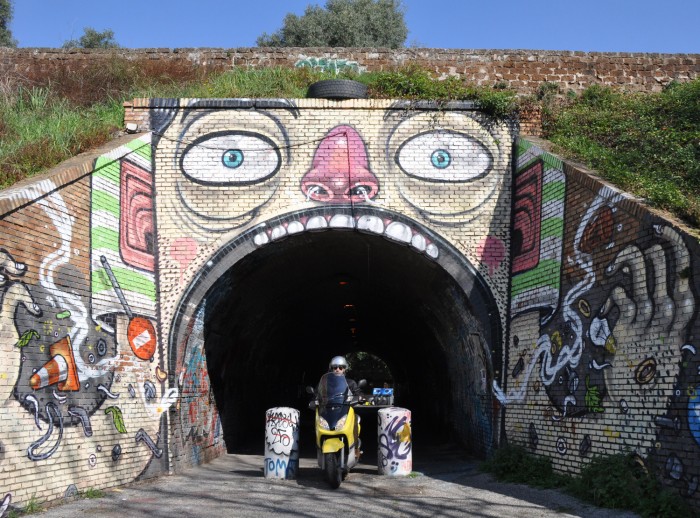 Another international collaboration came with Jim Avignon, who lives half his time in Berlin (see this article about street art in Berlin) and the other half in New York. Invited to paint a large corner wall of a newly opened bar that hosts live music, this painter is also a musician, and his time in Rome was divided, performance-like, between working on the wall and playing live in the bar. The bar’s owners, Mariella and Marco, moved here actually inspired by the way that street art has blended with community life in this area. Avignon states “Street art changes the quality of life in areas, so if there’s more art, its almost like education for the people. I understand that people here really love this area…” 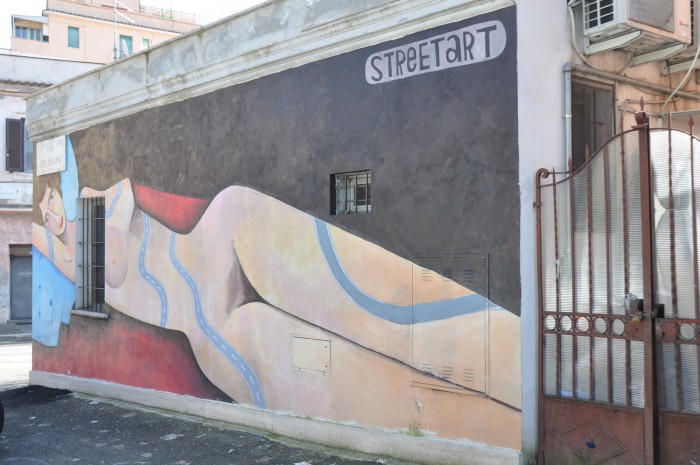 Probably the most famous international artist to collaborate on the MURO project is Ron English, whose presence here was documented by the crew of Sky Arte. Giorgio says this was one of the most wonderful experiences because of the way the whole community really warmed to this quirky American. The local barber, Gino, thought the artist needed a haircut, and Ron let him have a go. 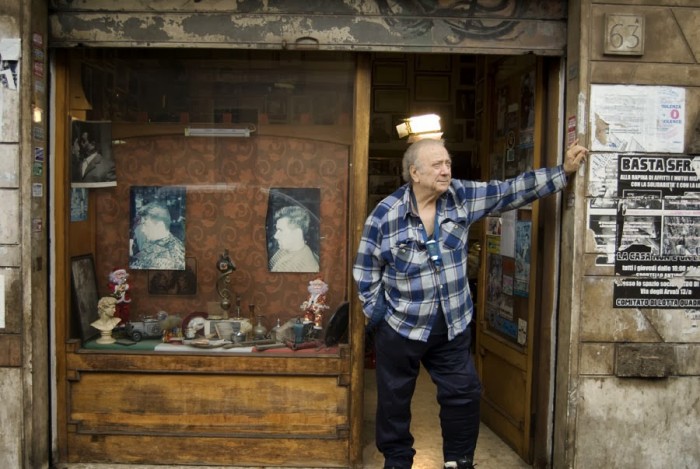 The beautiful work on via dei Pisoni took three days to make, during which time neighbours brought home-made tagliatelle and gifts of drawings and anecdotes were exchanged. And in the end, Rome has a Temper Tot / Baby Hulk by Ron English. 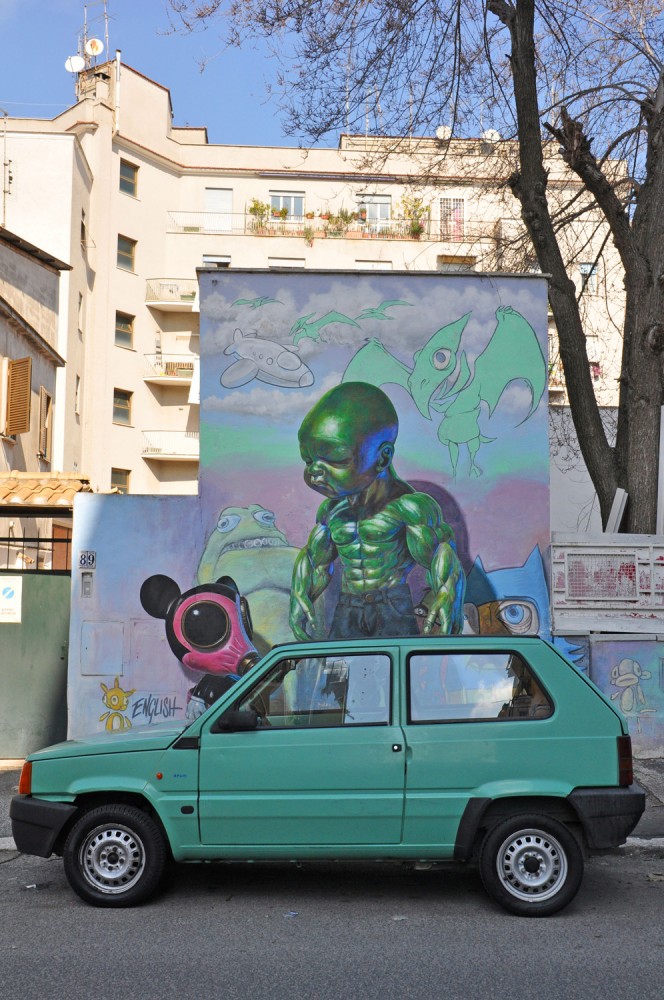 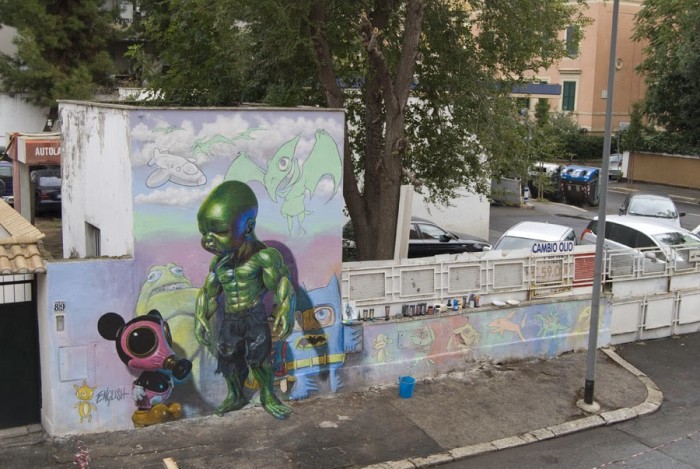 Diavù and his team are great communicators. If you understand Italian, I highly recommend watching this video about the project – something of a sneak preview of the narrative power that will truly come through when the story of Quadraro and its street art airs on Sky Arte in Italy in October 2015. It includes testimonials from neighbourhood residents who appreciate what’s being done to cheer up their area.

If you’re in Rome any time soon, do book a tour of MURO with Giorgio, who is happy to do it in Italian or excellent English. His walking tours are available every 2-3 weekends and cost €10, whereas Marco leads the bike tours for €20 including the bike! While it’s possible to see the area on your own, there’s no question I came out much richer having heard the tale firsthand from Giorgio. In addition, you support the MURO association with your fee – you can also donate something more if you wish. 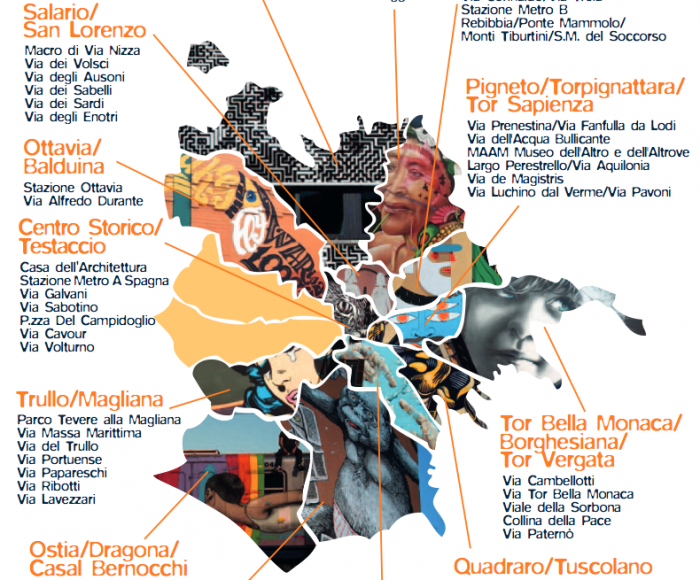 In late April 2015, the City of Rome released an official map of street art (download it here) that indicates the streets and areas in which to find some 330+ murals. In addition, in collaboration with ArtTribune, there’s an excellent app for IOS and Android that indicates specific locations and also biographies of the artists. 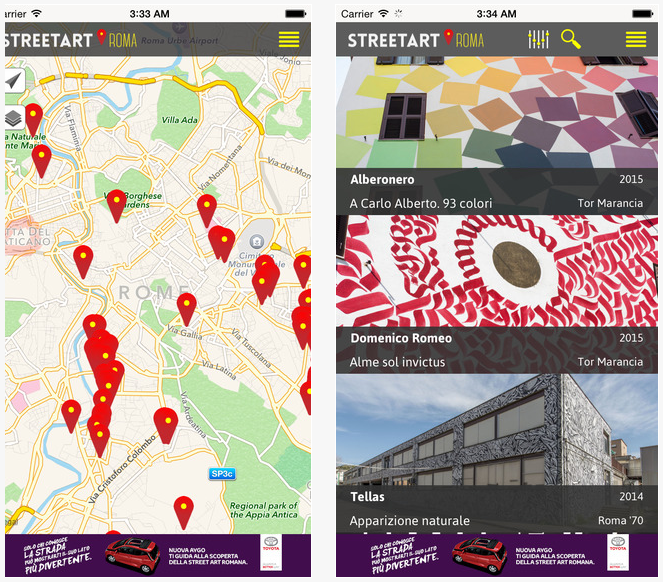 A video highlights some of the locations to inspire a visit, while on the official Turismo Roma website, there are “themed itineraries” of street art through the various areas (scroll to the bottom of this page).

The city has effectively institutionalized street art into an official museum. Culture superintendant Giovanna Marinelli states: “We chose a relevant slogan for this project: cambia prospettiva, la strada è il tuo nuovo museo [change perspective, the street is your new museum]. Because the goal of this map is to show Rome from another point of view, not archaeological but interested in the urban and in contemporary art. A new tour that will inspire tourists to return to the Capital to see it from another perspective, but I think also of the many Romans who will discover the beauty of their own area [through it].”

What does the street art community think about this institutionalization? I asked Jessica Stewart, author of Rome Photo Blog and acting representative for a number of Rome’s street artists. “As the city of Rome gets more involved in recognizing the importance of street art to the city’s culture, it will be interesting to see how things develop,” she says. “Certainly institutionalizing a phenomenon that, by nature, was illegal is fraught with many issues and, in fact, the map recognizes commissioned artwork while largely leaving out the spontaneous pieces that are the root of the movement.  This isn’t something just particular to Rome, but happening across the globe, so is a sign of a larger movement into public art or muralism while the underground thread of illegal artwork continues to thrive in its own unique way away from the spotlight.” 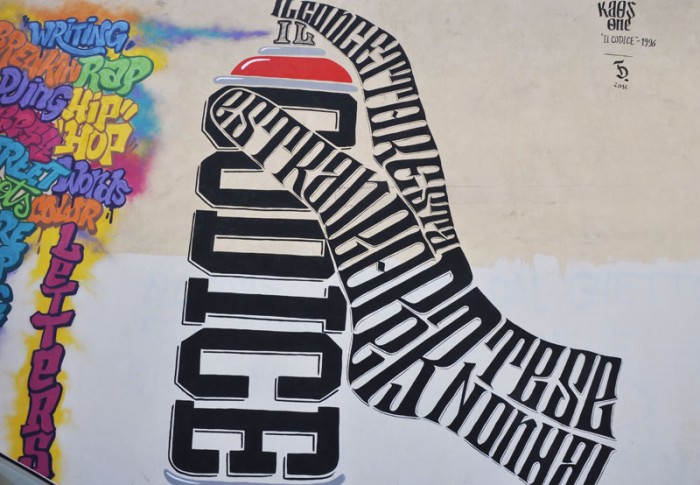 This push and pull between authorized and illegal parallels another within the movement, that between writers and street artists. When we visited Quadraro, one of the newest works was by Pepsy, nickname of Daniele Tozzi, an ex-writer interested in lettering whose style and attitude have morphed into the more legal forms of art (he’s also had solo exhibitions in galleries). “Il Codice” shows text from a 1996 song by rapper Kaos One: “Il concetto resta estraneo per te se non hai il codice” (the concept is foreign if you don’t have the code) in the shape of a hand holding a spray can out of which come the words and styles of the writer movement. The rap is a kind of writers’ manifesto, of its illegal and non-commercial nature, of the pride and individual style of those who practise it. But the song’s fierce and abrasive lyrics (“se vuoi chiamarla guerra e allora guerra sia“) are the product of a different era, one of twenty years ago. A point of reference for street artists, but one that is at a point of evolution.

An artistic place to stay in Rome 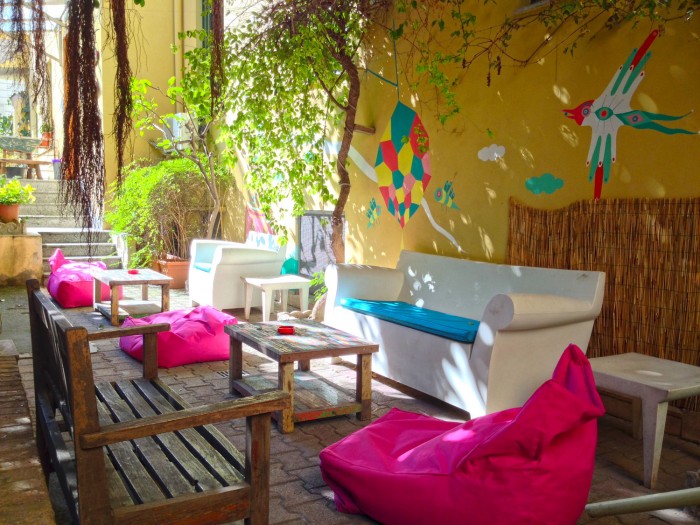 The garden at Beehive Rome, with mural by Gio Pistone

When I went on my discovery of street art in Rome, my home base was The Beehive, an eco-friendly budget hotel not far from the central train station. American owners Linda and Steve are great promoters of the arts, and commissioned Gio Pistone, an artist we saw in Quadraro, to paint a really cheerful wall in their garden. The courtyard garden is the perfect bohemian place to relax, and it’s also host to special events, like the monthly “Storytellers Rome” (held indoors in the winter) – a throwback to the times of troubadors, a rare opportunity for oral storytelling that I experienced during my visit and highly recommend. 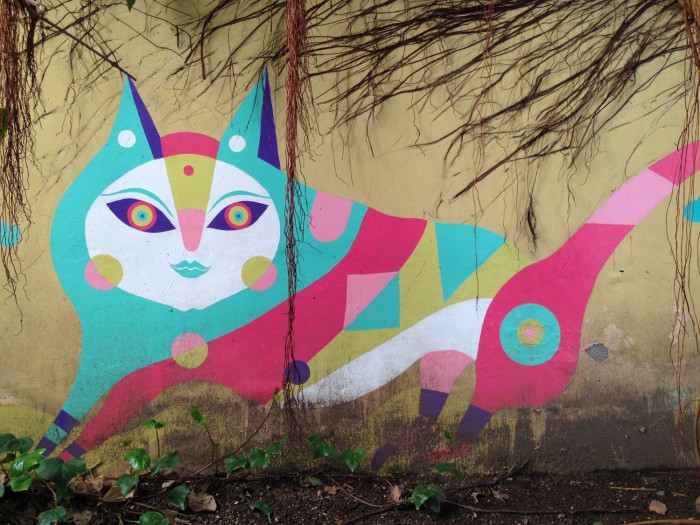