This article is about sustainable tourism in the Cinque Terre. If you’re looking for travel information to and around Cinque Terre please click here!

Krista and Sharon set out in 2008 to make a film about the impact of mass tourism on the Cinque Terre and the area’s preservation efforts – a careful balancing act between economic progress and ecological disaster that has also been studied in a documentary about Cortona, as well as discussed in the press, including an issue of The Florentine that we dedicated to the theme. 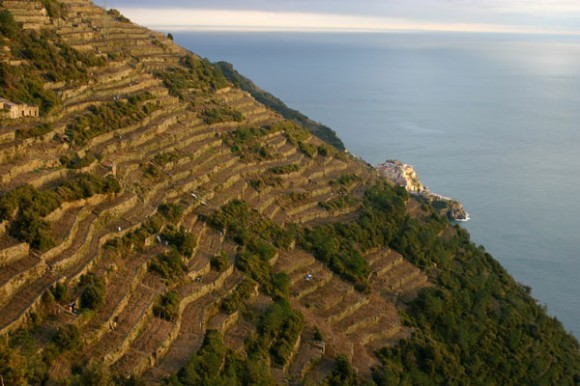 Terraced vineyards in the Cinque Terre

The two independent filmmakers finished gathering material in Italy in September 2010. It was a documentary focused on wine production as sustainable development, though it focused also on sustainable tourism and related environmental themes. Two weeks later, the most interesting people they filmed got arrested. Scandal hit the Cinque Terre. And not too long later, in October 2011, Vernazza and Monterosso were devastated by flooding and mudslides, flooding that also affected Genova, but that might have been avoided – say the newspapers and the carabinieri – had it not been for overbuilding in the environmentally delicate area.

AT: What drew you to the Cinque Terre in the first place? Are you sure it wasn’t Rick Steves?

SB: My first visit was over ten years ago, during an organized tour of Italy with a group of Americans. I had wanted to find somewhere “unusual” and “off the beaten path” to discover, and the Cinque Terre was a quick day trip from where we were at that time (in Tuscany.) I fell in love with the area immediately, and almost every year after I returned and over the years I began to know the area a little bit better. It was through those short visits that I began to see some changes… in 2001, 2002, the Cinque Terre was not quite so full with tourists and the park office was fairly new. Over time, the crowds got larger and the organization of the park grew. I shared all of my observations with Krista, and, together, we thought that that this development would be a good subject for a documentary film. Through research we discovered the restoration of the winemaking tradition and it became our first area of focus, but then, with a 2008 research trip, the area of focus grew.

What scandal hit the area that drastically changed the direction of your documentary?

Two individuals interviewed for the film were arrested just two weeks after we got home; one of them was cleared on all charges, the other is Franco Bonanini, who was the president of the Parco Nazionale delle Cinque Terre at that time. Those arrests took place on September 28, 2010. I am sure you can find objective documentation on what happened and how; I would be prefer to simply state that it was that arrest that changed the scope of our film, but we have no comment on anything else regard to the arrests. 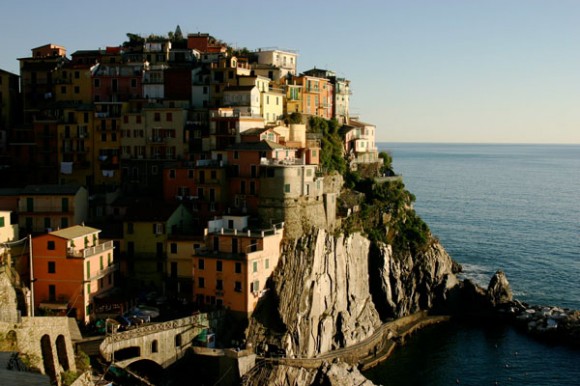 Hasn’t Cinque Terre done some things to preserve the environment? I thought I read that they did not allow plastic bottles in the area. Was it just a media ploy?

The ban on plastic bottles and some other restrictions were indeed a few of the many programs implemented by the park to try to sustain the environment of the area.

Name three specific things that you think Cinque Terre must do to pull things together and save the area from itself.

We are not environmental experts or experts on sustainable development or sustainable tourism, and so we hesitate to suggest that anyone outside of the community should comment on what the citizens need to do to “save” the area, if it indeed needs to be “saved.” We care deeply for the residents of these villages, their land, and their traditions, and we wish to allow them to tell THEIR story, to highlight THEIR concerns and struggles, so that they may have a voice in our film, and then to allow the audience members to form their own opinions. 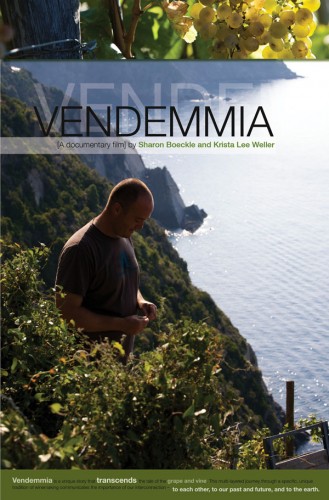 You can support the documentary Vendemmia through the filmmakers’ kickstarter campaign, which ends January 31 2012 and has already reached its 2600$ goal! They set the goal low to be sure to reach it (and 48 people so far have been convinced to help them monetarily) but still need more money for plane tickets and equipment rentals.