Everything you ever wanted to know about train travel in Italy

Trains are one of the best ways to get around Italy once you’ve arrived from abroad. Between major cities, they are fast and efficient; anywhere north of Naples it makes more sense to take the train than to drive. Trains can also be good for getting around within a region for day trips to other towns or cities. But navigating the system requires familiarity with the processes of how to buy train tickets, how to find your train and more. 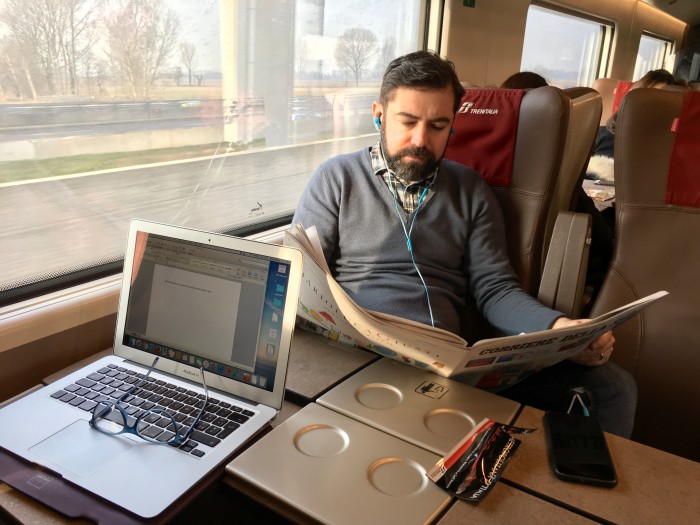 I wrote this article about train travel in Italy while… on a train!!

Trains between major cities in Italy

I’m actually writing this blog post while taking a fast train from Florence to Milan, which we do relatively often because my brother and sister in law live there. On weekdays these trains are packed with businessmen going up for meetings, and the same can be said for most of the stops on this line. The high speed train line runs right down the center of Italy. The main stops are Salerno – Naples – Rome – Florence – Bologna – Milan – Turin (be familiar with their Italian names Salerno – Napoli – Roma – Firenze – Bologna – Milano – Torino). Another line takes you over to the East coast of the peninsula; for example, you change at Bologna to go to Venice (Venezia).

There are two companies that run trains on this line and you can buy tickets from either: Trenitalia (called Frecciarossa, FrecciaArgento or FrecciaBianca depending on the line) or Italo. Italo is the new entry that has provided competition and has forced pricing and options similar to low-cost airlines. Each train company has their equivalents of economy and business classes, as well as some special cars like the silent one (my fave!) or the movie one. Pricing also varies depending on how much flexibility you need for cancelation etc. When making this choice, consider that you generally can only make those changes online, so if you’re traveling and cannot easily access the internet, that can be a challenge. 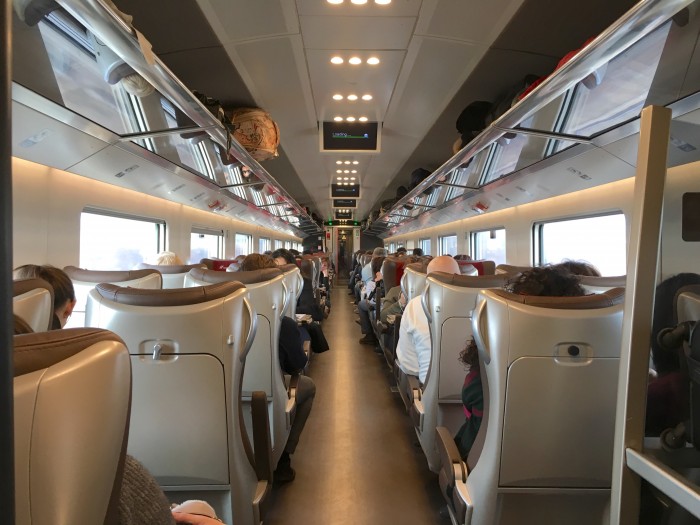 Here are a few things that are nice to know about taking these trains. 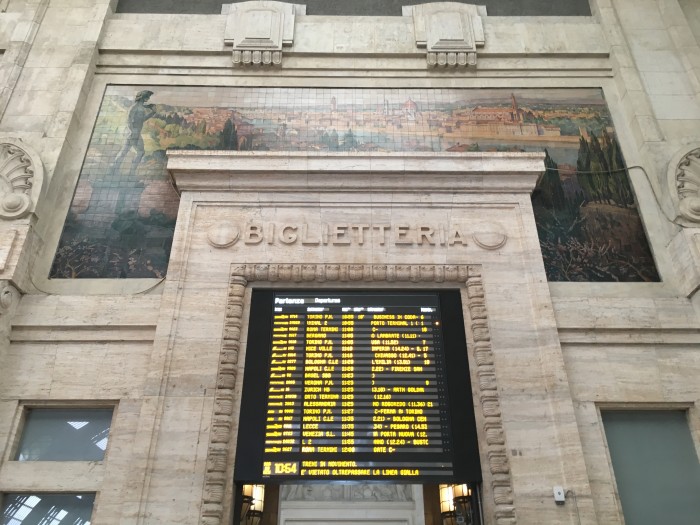 The departures board (in Milan’s central station)

Inter-city trains used to be the country’s high speed trains running between major cities. Now you spot them more often on routes like that down the Adriatic coast. Spacious and rather plush, they can be a lower-cost option for trips like Milan-Rome, slightly slower and not quite as on-time as the newer Frecciarossa and the Italo trains (which take priority in the control rooms).

Like with the fast fast trains, you do need to book a seat on Inter-city trains and sit in your designated spot. If you do not have a seat, you can stand. 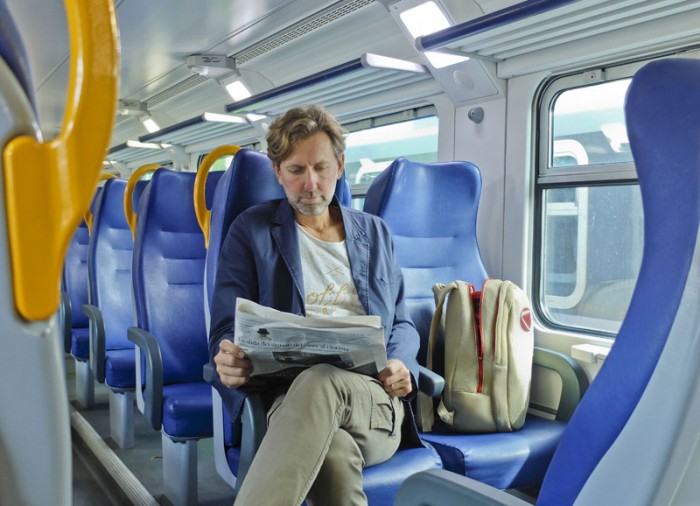 Regional trains are the ones that get you between towns, and that are used by local commuters. You don’t want to book these slower, less equipped trains for longer voyages since they stop everywhere – although if time and comfort are not issues for you, you can take an extremely cheap regional train from say, Florence to Rome. Some of the lines are equipped with rather nice new trains that have plugs and working bathrooms, though others have the famous old style trains lacking modern conveniences.

Until recently, the main convenience of regional trains was that you could buy a ticket and take any train you wanted. In 2016 they changed the system so that you have to specify the day you are going to use the ticket. If buying online, tickets purchased for these trains are considered pre-validated just like the high speed ones. You have to use it within the 4 hour time slot for which you booked it. There are no reserved seats.

If you buy these tickets in the station, you have two choices. You can go to a machine, pick your train time and receive printed tickets, valid for that 4 hour window. You have to validate them at the ticket puncher thingie. Another option is to go to the Tabacco store in the station, where normally they have the ability to print out regional tickets. You have to say where you’re going and what date, but you don’t have to specify the time of travel, which can be helpful. The ticket looks like a cash register receipt, though slightly larger, and you have to stamp its bottom part in the machine on the tracks.

In case of train strike 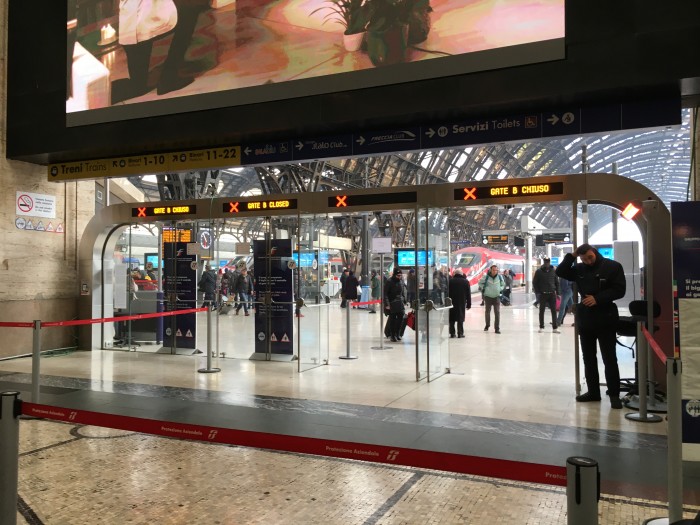 A security barrier at a main train station (Milano centrale). Most regional trains do not have the requirement to show tickets before accessing the tracks.

Trains in Italy function rather well, except in case of extreme weather (which includes heavy rain), or when there are strikes. Unfortunately, there’s really nothing you can do except roll with it when this happens, and be comforted by the fact that everyone else is in your same position. The main website that lists strikes is only in Italian and incomprehensible even to those who speak it fluently. This site in English reports the major strikes for all travel in Italy.

Strikes usually take place from 9pm to 9pm, with “guaranteed hours” on certain commuter trains as well as almost all high speed trains. You’re better off with a high speed train than a regional train on these days as the fast (read: expensive) ones are more likely to run. That said, if the train is due to reach its final destination more than one hour after a the strike begins, it could decide to end its trip at an earlier station.

In other random but perhaps useful information, if you’re on a high speed Frecciarossa, Frecciabianca, Frecciaargento or Italo train and it is between 30 and 59 minutes late, you can present a claim and receive 25% of your ticket price back as credit to be used within 12 months on any new ticket. The later the train is, the more the percentage goes up (2 hours gets you 50% back). Of course, this bonus does not apply if the delay is out of the train company’s hands, like if there is a strike or bad weather. Of course!

How to buy tickets for train travel in Italy

You can buy tickets online or in person at any train station, though these days I cannot imagine why anyone would choose the latter given the long lines! We usually compare prices on the two competitors’ websites, www.trenitalia.it and www.italotreno.it. Both are available in English. Beware that once you’ve chosen the train and seat type you have 15 minutes to check out, which is never enough time to do a comparison! Another really useful, English-language resource is GoEuro, which does the comparison for you and also includes bus schedules, which can sometimes be the best solution for certain destinations.