The Secrets of the Venice Biennale

I went to see the Biennale di Venezia for the first time this year. Although I’ve always been an art lover, I’m not a fan of big crowds, and my interest in contemporary art is something that has been growing only recently. I only faced my fear of a hot, crowded Venice since I was invited to come explore the Biennale and some of the satellite events organized by the European Cultural Centre. This Dutch foundation, an umbrella for numerous projects, has 15 years of experience in Venice, managing four palazzi and organizing their own exhibitions as well as consulting for entities that wish to have a presence during the Biennale. With a publishing projects, educational program and near-future plans to expand to other countries, the ECC is not the only institution operating in this field in Venice, but it is one of the largest. 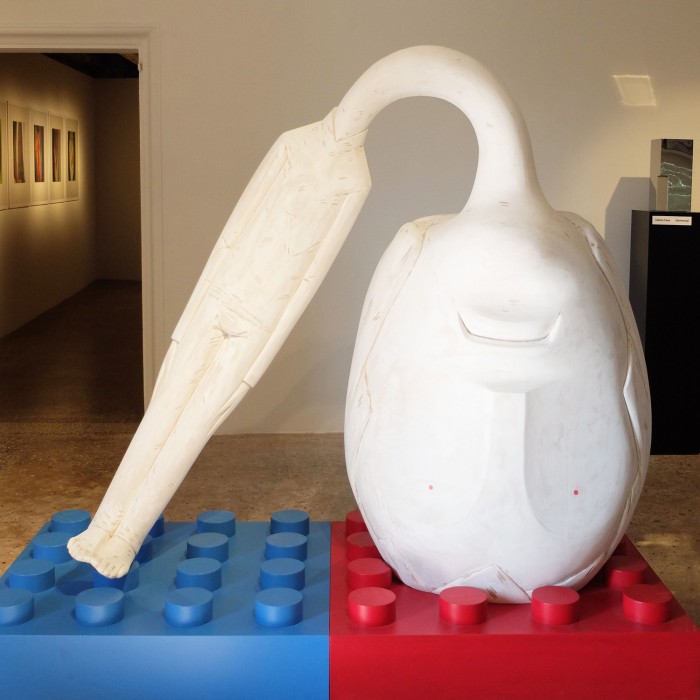 This is me when I look at contemporary art. It’s OK, there’s a solution.

Working behind the scenes at the Biennale for so long, the ECC wished to share the “tricks of the trade”, so this year they launched the European Cultural Academy, an intensive summer program in Venice aimed at curators, artists and aspiring art consultants, as well as at people like me who have an arts background or interest, but who are totally mystified by contemporary art and the complex wheels that revolve behind the scenes. Maria Nekrassova, director of the newly formed Academy, told me that the goal is to be totally honest about all the secrets of the art market, to explain to people who want to break into this world everything that goes on behind the scenes – shifty or not. Because, with all the idealism that goes into much of the art on display, behind that idealism is someone who is paying for it. And pay for it they do, because Venice is the world’s art stage, the number one place to be noticed. Here are some of the secrets she revealed.

See it in Venice, buy it in Basel. The Biennale is, at the moment, ostensibly not about selling works – at least, not in the official event and national pavilions. While they used to be for sale, this drew criticism as it created an overly commercial event, so now it’s technically not permitted. Rather, Venice is where people go to spot talent and, especially in the preview days, take the contact of galleries from whom they may then buy the works at Art Basel. 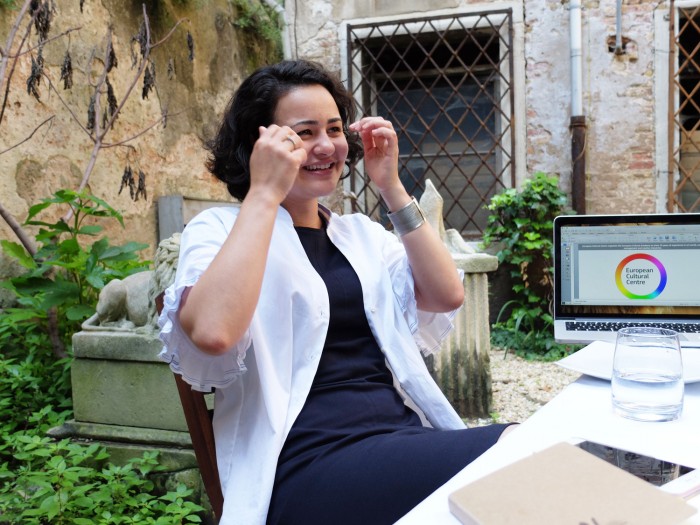 This is Maria, who knows ALL the secrets.

There’s more than one way to skin a cat. There’s a lot going on in Venice during the Biennale that isn’t officially recognized by the Biennale Foundation, which explains why I was surprised that it wasn’t possible to find a map or list of all of the events going on. That is because, as Maria explained to me, there are various ways to be “in Venice” at this time, which is THE place to be for the international art crowd.

The Biennale is made up of (1) a curator(s)-led group show, which means you have to be spotted and chosen (this year by Christine Macel); (2) national pavilions, which means you have to be invited by a country that has a pavilion and chosen by the curator appointed by your country’s arts council or similar; or (3) Official Collateral events (also known as Parallel program) authorized by the Biennale around the city. But there is also the option of organizing your own exhibition in a rented palazzo. The latter do not have the official logo on them and tend to be described as being “in the context of the Venice Biennale”. 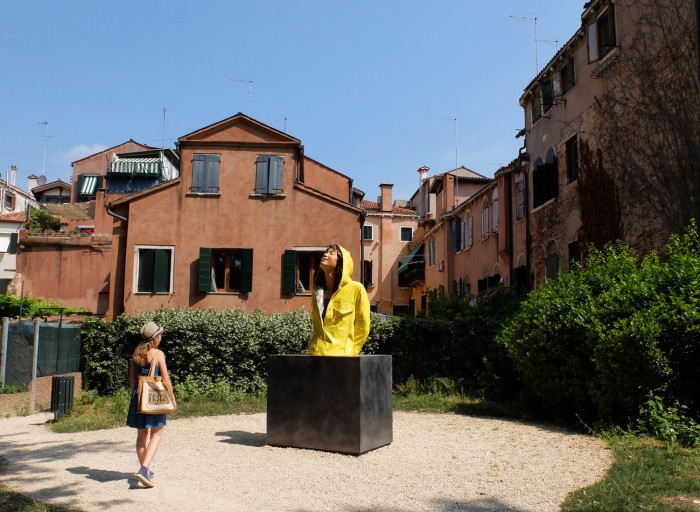 This exhibition of works by Carole Feuerman (part of a larger group show organized by the ECC) was outside of the official context of the Biennale, but was my favourite by far!

Renting a palazzo is really expensive. Even just one floor. We’re talking it’s easy to drop €250,000 to rent a space during the Biennale. On top of that, this year the city decided to enforce safety regulations that had been declared a few years ago but willfully ignored. Inspection by firemen, held only four months before the Biennale was due to start, led to huge costs for palazzo owners and long-term renters to get up to code. According to ECA sources, more than a third of the buildings didn’t make the cut. 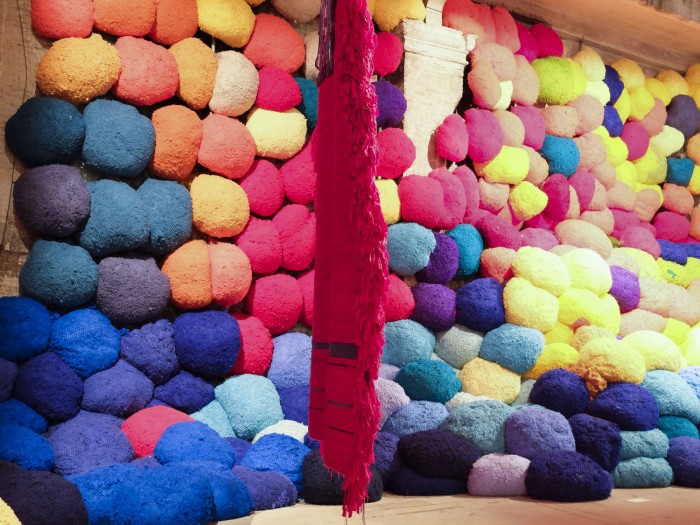 Sheila Hicks’ wool work in the main exhibition is one of the most Instagrammed works in the Biennale.

Being invited to show work in Venice doesn’t mean artists get paid – on the contrary. If you’re young, unknown and unrepresented by a gallery, it’s going to be difficult to break into the scene. Even if you are invited to participate in a curator-led show, it’s a pay-to-play game. That is, you need money to make and transport your work, as well as to pay for your portion of the space used. And here’s the thing: the price isn’t the same for everyone. In the show curated by the ECC across two main exhibition spaces, some artists’ participation might be paid for by their gallerists, who make this investment because it seriously ups their likelihood of selling the works later. Some young artists might be chosen but have no funds at all, so the ECC helps them write grant applications to the right places, or suggests sponsors that they might approach on their own. Finally, some big-name artists might be not entirely cooperative in providing works if chosen, but are wanted by the curators to lend credibility to the whole. In this case, organizers may get extremely creative about how they fund this part of the show. 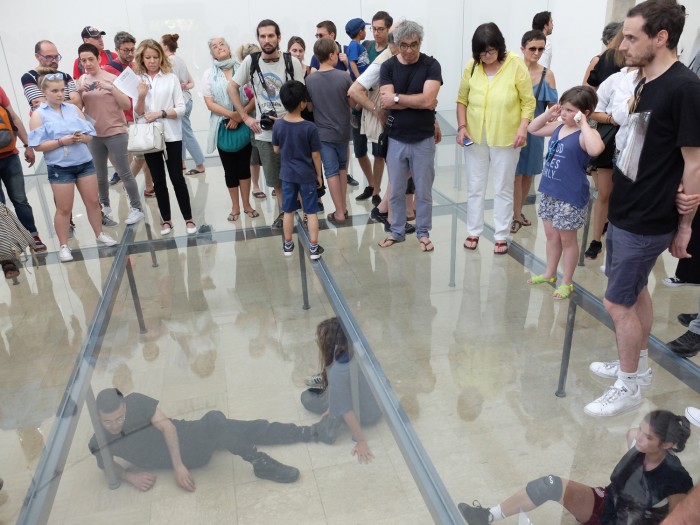 People looking at performance art (German pavilion). But do they understand it? I don’t.

There are two main ways to promote a show, depending on what it is and what the goal is. To make a name for someone (especially in the case of things like performance art), invite as much press as possible and try to get visibility. To sell (paintings, sculptures etc.), hold a very exclusive party with collectors and offer champagne tours. Do not mix the two. 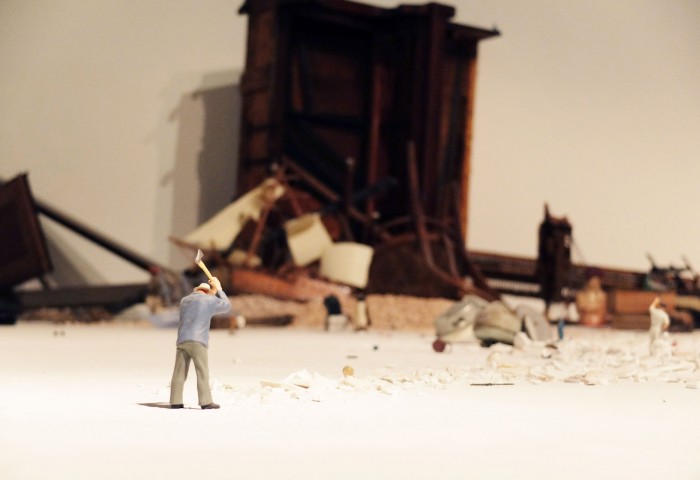 I can’t remember the artist’s name but the caption here might be “hacking away at it” :)

Venice is a whole new ballgame. If you’re used to running exhibitions elsewhere, even in Italy, doing it on your own in Venice, “in the context of the Biennale” so to speak, requires experience because the city – and the art world that inhabits it – has a whole set of both written and unwritten rules. You’ve got to know who to call when you need to move some gigantic arms on a boat on the Grand Canal, you can’t just rent a traghetto and do it yourself! Even if you are well organized, there may be unexpected elements. “A sculpture to be delivered to the second floor of Palazzo Mora,” Maria recounts, “was supposed to be 250kg, but when it arrived, it weighed double that! We had to arrange another type of boat and crane during the busiest setup week and almost didn’t make it for the opening!”

What Maria told me in our brief meeting is just a sampling of the secrets one would learn in the European Cultural Academy workshops, which can last from one to three weeks depending on how deep you want to go. After a trial run during the Biennale preview week, there will be three-week courses in July and August 2017, and of course they are scheduled again in 2018. Courses cost €950 per week. For more information, write to Maria (at) europeanculturalacademy.eu. Let me know in the comments if you’re thinking of attending!

DISCLAIMER: I was hosted in Venice by the European Cultural Center, but I was not paid to write this article. This text is the result of an interview with Maria Nekrassova; I take responsibility for any inaccuracies.