It was a rainy morning in February but Bernini’s famous Fountain of the Four Rivers glinted in its clean marble glory. Finally it’s out from under restoration, where it’s been for two years. Aside from the apparent cleaning, restorers have installed water filters to reduce calcium deposits, and a shock system to deter pigeons! The cleaner fountain gives us an opportunity to take a closer look at the history and visual aspects of the fountain. 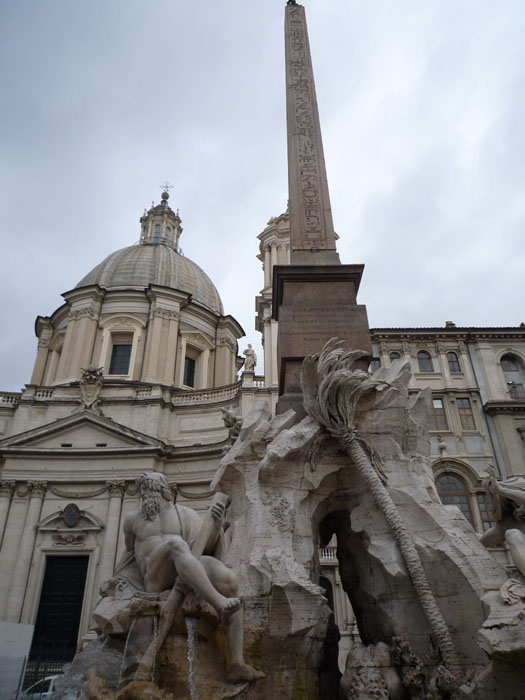 The large ovoid Piazza Navona sits on the footprint of the first century CE Stadium of Domitian. Pope Innocent X rebuilt the space in the mid seventeenth century to feature the Pamphilij family residence, the main church, S. Agnese in Agone by Borromini, and the three Bernini Fountains. All three are great examples of the Baroque style in art.

Bernini was a “Renaissance man” in Baroque times, capable of working in all media and revolutionizing every genre he touched, including fountains. The story goes that Pope Innocent X held a competition to build a fountain here. The main rule was that you had to use this obelisk, a Roman copy of an original Egyptian one; it was lying in the nearby Circus Maximus and the Pope wanted to reuse it in his piazza. Bernini was not invited to participate in the competition (at that moment he was a bit out of favour), so he made a model and had a friend sneak it into a room where the Pope was likely to see it. Indeed the Pope liked it and hired him, despite the extravagance of the project, and that it cost way more than the others. 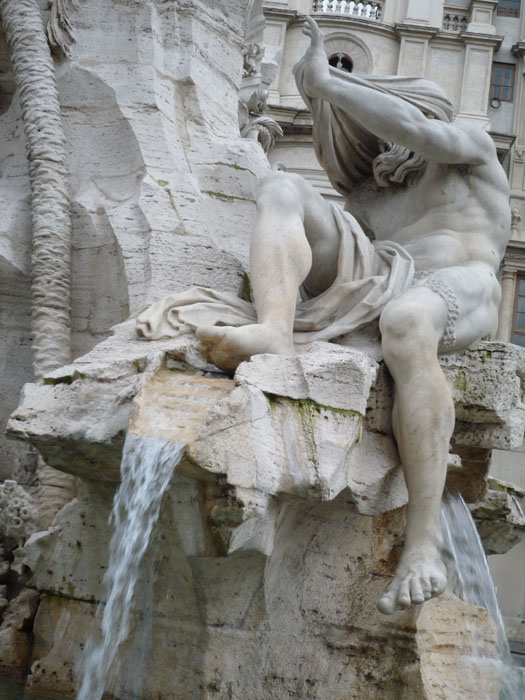 The fountain is composed of a big rustic rock in the middle, topped by a granite obelisk. Its name “The Four Rivers”, comes from the four large male allegorical figures on the corners, who are river gods: Nile, Gange, Danube, Rio de la Plata. The idea is that these rivers represent the four corners of the known world at the time:

Each of these figures is photographed and labelled below so you can identify them when you go in person. On the rock near each figure are various plants and animals associated with that region. At the top of the obelisk is a dove with a palm branch in his beak, made in bronze. This was one of the Pamphilij family’s symbols (it’s on the coat of arms photographed below), but in this context was also considered a reference to Noah and the Flood (in Genesis 8:11, Noah, who has been in the ark for over 40 days, sends out a dove to see if the waters had receeded, and the dove comes back with an olive or palm branch).

On a first level, The reuse the Obelisk signifies Rome’s conquer of Egypt. Contemporaries read the egyptian markings on the Obelisk as symbols of the sun’s rays, and by extension, the triumph of Christianity. The Four rivers represent the Pope’s expression of the supposed universal influence of the Catholic Church. (In fact, Africa/Rio looks up at the obelisk and shades his eyes as if experiencing a miraculous conversion.) The Dove at the top is a symbol of both of Pope and of the Holy Spirit, acting as an effective reference to the Church.

Baroque art is characterized primarily by theatricality and technical virtuosity. The theatrical part is not hard to see – check out the poses of the figures! These are not natural positions, but frozen movement. To prove this, just try to hold one of those positions yourself for a few minutes. As for technical virtuosity, Bernini deals with an amazing and totally unnecessary engineering challenge by putting a heavy granite obelisk over an empty space – the arch disguised by the form of the rock in the center of the composition. Furthermore, he works in multimedia, seamlessly combining granite, rough stone (which is really marble), polished marble, bronze, and water. The harmonious whole makes it look like it was easy. 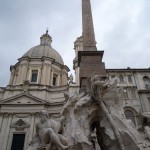 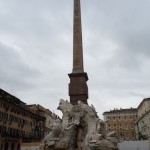 Fountain of the four rivers and piazza 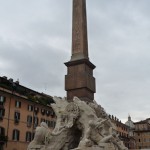 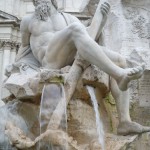 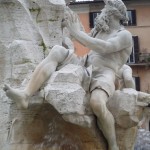 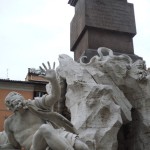 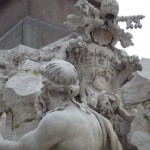 The papal coat of arms on the fountain 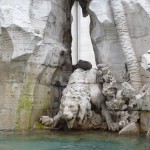