In AD 64-68, the nasty dictatorial Emperor Nero built himself this pleasure palace on the ruins of the city he burned down. Nice guy! He employed the architect Severus and the painter Fabullus. The huge expanse of connected vaulted chambers that is now underground was the ground level of the palace; a second level was destroyed by subsequent emperors. Nero’s private artifical lake was removed to make way for the nearby Colosseum. The lower level was filled by sand and used as the foundation for a subsequent palace. 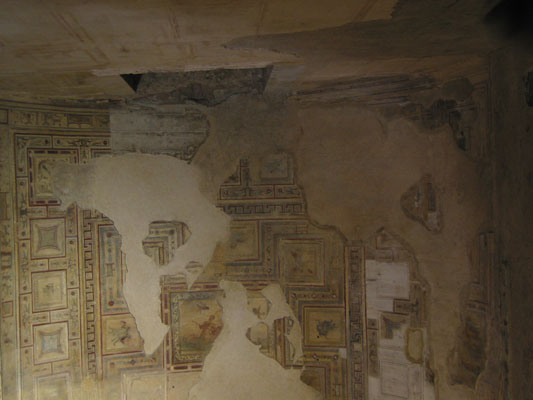 In the mid 1490’s some holes opened up in the ground of a park, and Renaissance artists, amongst the first of them Pinturricchio, crawled down into these “grottoes” and observed their colorful, unusual frescoes, which they named “grotesques”. These were the inspiration for the grotesques that cover so many square miles of ceiling and wall space in the Renaissance, and is particularly interesting to me since I am interested in studying Renaissance decorative complexes. Grotesques vary depending on the period (both in Roman and Renaissance times) but is characterized by an impossible, fantastic combination of creatures that titillated artistic minds.

The Domus Aurea is definately worth the visit for anyone interested in Renaissance art (not to mention Ancient Roman!), though for fullest appreciation it requires some preparation – it helps to know something about ancient wall painting, so you might consider reading up with this book: Robert Ling’s Roman Painting

. As an instance of ancient architecture it is a bit confusing because it is a partial structure (remember one floor was destroyed) and also only partially excavated. Study the map, but don’t try to orient youreslf. As for the frescoes, you need to imagine what this would have been like for those who crawled through in the fifteenth century — the frescoes were brilliantly coloured in reds and orchres (having not been exposed to oxygen for 1450 years) and must have been like nothing ever seen before. The effect would have been amazingly colourful and sumptuous. Imagine the excitement! To get an idea of what these were like, there is an informative panel in colour at the entrance to the site. You should also go see the contemporary frescoes from the house of Livia at Palazzo Massimo.

The Domus Aurea has been undergoing restoration for many years. Sometimes it opens up for special visits, but often it is CLOSED due to flooding. At the moment (spring 2009) it is closed.

Information is only in italian and can be found on the official website of the soprintendenza. When open you can purchase your reservation through this official website.

There is a little italian audioguide with some images here.