In the summer of 1816, poet Lord Byron rented a villa on Lake Geneva in Switzerland. It rained for days. Byron was running out of ways to entertain his guests: fellow poet Percy Bysshe Shelley; Shelley’s wife, Mary; and Mary’s half-sister, Claire, who had had an affair with Byron and was now pregnant with his child. 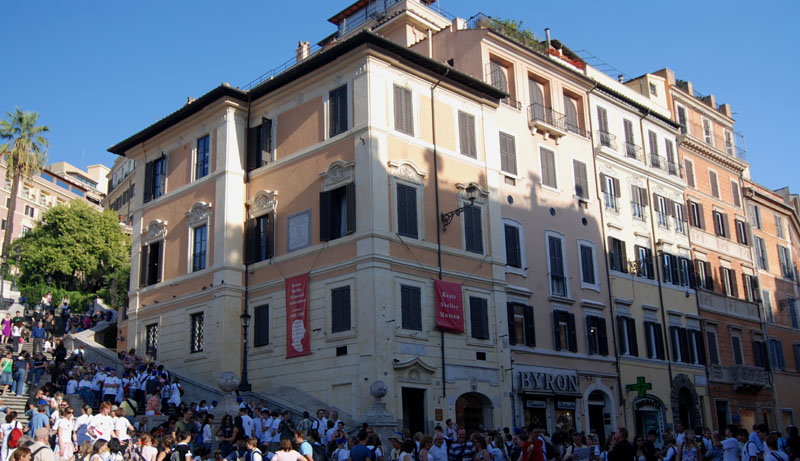 Byron suggested they each write a ghost story, and so Mary Shelley began writing Frankenstein.

Morsels of delectable trivia like this are everywhere inside the Keats-Shelley House. Built in 1725, the home overlooks Rome’s Spanish Steps and is a must-see for culture lovers. Two rooms on the second floor were home to English poet John Keats from late 1820 until his death in early 1821 at the age of 26. The house, now a museum and library, preserves the memory of Keats and fellow poet Percy Shelley, both of whom lived and died in Italy.

Familiarity with these leading poets of Romanticism (1789-1837) isn’t a pre-requisite for enjoying the rich history of the house; guided and self-guided tours provide fascinating insight into the lives and passions of Keats, Shelley and Lord Byron. This is an offbeat attraction in Rome and ultimately an unexpected delight. 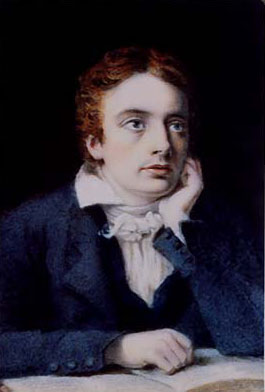 Miniature of Keats, by Joseph Severn, from Keats-Shelley Museum website

In 1816, Keats began  his short but prestigious career when he wrote his first great poem, On First Looking into Chapman’s Homer. In 1819, he wrote Ode to a Nightingale and Ode on a Grecian Urn. By 1820, when he and his caregiver-friend Joseph Severn left for Rome, Keats was near death from tuberculosis, the same disease that had claimed his mother and brother.

A pall of sadness lingers in the Keats Room. Keats spent his final days in bed, his only diversion being a window view of the Spanish Steps and Bernini’s boat-shaped Barcaccia fountain. The circa 1820 walnut “boat bed” is a replica of the one Keats slept in. Keats’ death mask rests near this bed.

Devastated by Keats’ death, Shelley wrote the great elegy, Adonais. He had already been acclaimed for his Prometheus Unbound. Percy Shelley’s death at age 30 was as premature and tragic as Keats’. He drowned in 1822 when his boat was caught in a storm near Livorno, on the western edge of Tuscany. He and Keats are buried in Rome’s Protestant Cemetery. Byron, whose Childe Harold and Don Juan brought him great fame, succumbed to a fatal fever in 1824 at age 36.

The Salon in the Keats-Shelley House contains artifacts that beckon reverence: manuscripts, drawings, first editions, a sonnet about Keats handwritten by Oscar Wilde, an essay handwritten by Walt Whitman, a mask that Lord Byron wore to a Venetian Carnival, a letter written by Elizabeth Barrett Browning, who adored Keats.

When you visit, be sure to arm yourself with a copy of English Romantic Poetry: An Anthology (Dover Thrift Editions)

This is a guest post by Roberta Sandler, author of “A Brief Guide to Florida’s Monuments and Memorials” (University Press of Florida). She is a member of Society of American Travel Writers.