Some Churches of Renaissance Rome

Intro: this period was (not surprisingly) my primary interest during my month in Rome in 2004. Here is only a selection of the original arttrav material on Churches in Rome built or decorated primarily during the Renaissance.

Suggested reading:
An excellent general introduction to Renaissance Italy is Radke and Paoletti’s textbook, Art in Renaissance Italy, which is organized by city rather than strictly chronologically. One of the most readable and intelligent books on Renaissance art just in Rome is Loren Partridge’s Art of Renaissance Rome. For some advanced reading about the period in Rome and Florence after the death of Rapahel, try
Marcia Hall’s book “After Raphael”. 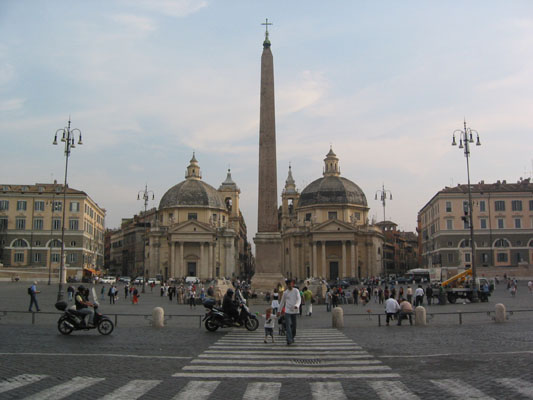 Piazza del Popolo is home to three churches. At one end of the piazza, beyond an obelisk, are twin Baroque churches. To the left from this view and up a flight of stairs you access the church of Santa Maria del Popolo.

This church contained no fewer than five chapels plus the choir vault by Pinturicchio, though not all of these remain intact.

The two chapels (right aisle) for members of the Della Rovere family were painted by PINTORICCHIO in 1488-90 (Della Rovere Chapel) and 1504-7 (Basso della Rovere Chapel, 3) (the latter having much “school” contribution) and are in good state of preservation. These chapels show some of the first antiquizing grotesque work in the city. This includes the white and gold stucco work that can be seen around the altarpieces in both chapels; of particular interest is the gold-ground, colourful candelabra motif grotesquerie in the pilasters and window jambs of the Della Rovere chapel. Also note the delicate marble ballustrade decorated with family-shield-holding winged putti; I could not find this information written anywhere but would bet a small amount of money that this is original to the chapel. The wall tombs are also very fine and approximately contemporary. Each item is labelled on a sign in front of the chapel.

The Chigi chapel was designed by Raphael to be a harmony of all media. It didn’t quite succeed (although the plans, preserved in drawings, are very interesting), partly because Raphael died in the midst of it all, and his patron only three days later. The present work is not much like the plan, perhaps because of the alterations by Bernini, who was of a very different mind. 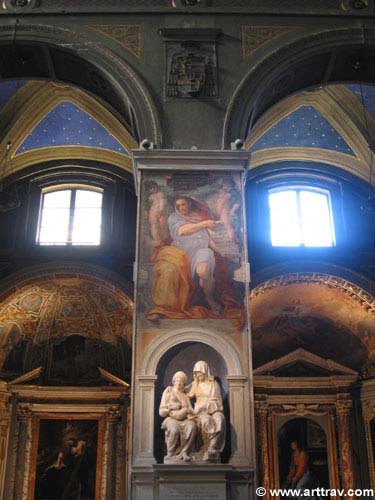 This church houses just one lonely prophet by Raphael (on the third pillar on the north side, restored by Daniele da Volterra). It shows how much the artist was influenced by Michelangelo. The figure is powerful and is a definate reference to the Sistine Chapel ceiling, though the style is Raphael’s own – less sculptural and cold, and more graceful. The garland-bearing putti that flank the prophet stand in casual contrapposto; they charm us with boyish looks in a style that is typical of Raphael’s treatment of this motif.

This church is one of the most important manifestations of Roman Mannerism in the period after the death of Raphael. The apsidal section of the church is divided by an iron gate which remains closed in the mornings. In this way you get the view that the laity had for almost two thousand years of Christianity. If you’d prefer to actually see the frescoes in the latter half of the church, in the afternoons, if it’s not raining (!), the caretaker opens the gate. He is vigilant about talking and touching, and will tell you so in French.The church is composed of a number of deep side chapels and two more important transept chapels. The left transept (Pucci chapel, photo) was frescoed by Perino del Vaga (1523-7) and finished by Taddeo and Federico Zuccari (after 1566). Perino’s are the vault and the lunette on the far wall, which show strong Raphael influence — note the composition of the Visitation scene which looks a lot like Raphael’s School of Athens.

Daniele da Volterra painted the Orsini chapel (R3, 1541-8) though the only part remaining of his contribution is the altar wall fresco of the Assumption of the Virgin. Another interesting chapel is the Guerrieri chapel (R6), by an unknown artist from the school of Perugino, who painted a lovely grisaille frieze of the Passion.

Located at the top of the Spanish Steps. 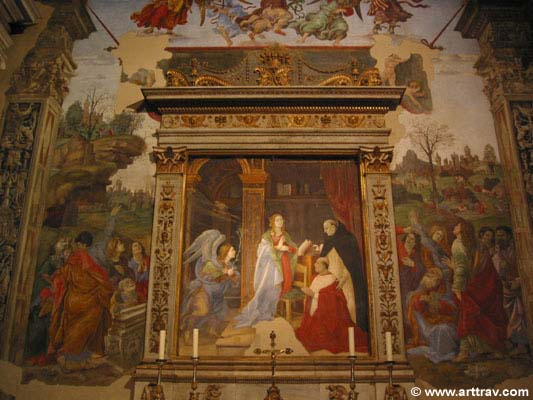 The Dominican church of Santa Maria sopra Minerva is worth a visit in a general sense, though I was disappointed to learn that the beautiful painted vault and decorative elements are nineteenth-century.

The Carafa Chapel by Filippino Lippi is contemporary to his work on the Strozzi chapel in Santa Maria Novella in Florence.

Located in the south transept, frescoes were begun in 1489.

This museum houses the patrician family collection of the Barberini. The Barberini family’s collection began in the 17th century but was much enriched in the 1950’s and 1970’s as well. The rooms themselves have frescoed ceilings of some note.

The collection houses a number of gems. The most famous work is Raphael’s “Fornarina”, said to be his lover, though I didn’t find her all that enigmatic – I was distracted by her very tweezed eyebrows and kinda icy expression.

My favourite work here is a “Mystic Marriage of St. Catherine” by Lorenzo Lotto. Signed and dated 1524 and executed in Bergamo, this sacra conversazione combines all sorts of influences including Durer. The event is witnessed by a number of other saints who show these influences in a mish-mash kinda way: Saint Jerome recalls Lotto’s other paintings of this subject while his quizzical looking lion looks pretty Dureresque (I’m thinking of a print he did of this saint in his study); the warrior saint George recalls local (Bergamasque) influences, while the young saint Sebastian is very Georgionesque. Saint Catherine herself is all Lotto – be sure to get a good look at the details in her clothing and jewellery.

There is a work ca 1555 by Titian, the “Venus and Adonis”, of which there are multiple versions (Prado, Madrid; Washington, National Gallery; NY Met). Venus falls in love with Adonis because of a stray arrow sent out by Cupid who slumbers clumsily in the background. Venus, voluptuous and from behind, seeks to detain Adonis from going off to his fate of being killed by a wild boar, while the male god, wearing a jaunty magenta hat, coat and matching lipstick, looks perplexed and like he’d rather go hunt.

Be sure to check out the two works by Filippo Lippi, hailed as masterpieces by the gallery, and the three Caravaggio’s.

The Galleria Borghese hardly needs an introduction, but here is my impression (as of October 2004).

This gallery houses what remains of a mostly seventeenth century collection by the Borghese family. It includes a lot of forced purchases that Cardinal Scipione Borghese made based on his powerful position, though unfortunately does NOT include a few hundred pieces that were sold to Napoleon. Known already by contemporaries for its interesting mix of ancient and contemporary art, it is today an eclectic collection with a few surprising masterpieces. Word has it that the audio guide is pretty good, though I used the lovely laminated “informative placemats” available in each room. These describe both the 18th/19th century fresco decoration in the villa and the paintings on the walls. It’s a little less detailed about Ancient sculpture, but in general the information is at a high level. The English is of varied but generally high quality.

The Galleria Borghese is delightful. It’s too bad i had to share it with 359 other people. For tickets, you must reserve on the internet or phone ahead, pick up your ticket downstairs in crowded area, check any bags and umbrellas, and then go upstairs to the ground floor museum for your assigned entry time… You are given only 2 hours in the villa after which an electronic voice announces, in four languages all of which sound like italian, that you must leave. This is enforced by mean guards who sweep through and kick you out without exception (i even heard a lady complaining that she had lost her child, but the guard said she’d find the kid outside eventually). The two hours is not exactly enough time to see everything properly, and i missed out on three rooms.

The room I found most exciting was #20, one of the last in the pinacoteca (picture gallery) on the “first floor” (second by american standards). In there with Titian’s beautifully polished “Sacred and Profane Love” is one Venetian “provincial” surprise after the next, including a precious Antonello da Messina, a late Titian, a Tintoretto, a powerful Pordenone, and one of my favourite “sacre conversazioni” by Lorenzo Lotto, with a very animated Christ Child who wears a white dress and tries to struggle out of Mary’s arms. This altarpiece is just tiny and in a very elaborate original (?) frame. Elsewhere in the gallery I appreciated 3 fabulous paintings by Dosso Dossi and a very interesting family portrait by Bernardo Luni. I didn’t think i’d like the Bernini sculptures (for which the gallery is most famous) that much, though i must admit that the Apollo and Daphne is truly a masterpiece. The sculpting is so light and fine, especially where her hair turns into leaves.

Directions: most people and guide books say you must walk a long distance from Spagna metro. To avoid this, take bus #910 from Termini, 5 stops. It runs frequently and the stop is at the end of the little Viale dell’Uccelliera upon which is located the gallery. AFTER visting the gallery you might choose to take a walk in the park, but at least by taking the bus you don’t get tired before seeing the good stuff! Booking is required via ticketeria.

This has got to be the most exciting of the small patrician museums in the city, with sixteenth and seventeenth century paintings and some reconstructed Ancient sculpture. Part of the fun is that it is open only saturday morning, so you feel very informed and exclusive just by going there! Entrance is rather dear (about 7 euros) but this includes a guided tour in English or Italian given by an extremely knowledgeable fast-talking professor.

The rooms of the gallery themselves are of note, with impressive frescoes dated 1700 on the cieilings depicting the triumphs of Alexander Colonna. The walls are hung frame-to-frame in a disposition that reflects the way they looked in the seventeenth century. To fill holes in the collection left by works comandeered by Napoleon, they had painted mirrors made by Carlo Maratta and Mario dei Fiori that are quite spectacular. In the first part of the main hall are the highlights of the collection, four reclining female nudes, one by Bronzino and three by Michele di Ridolfo di Ghirlandaio, who were recently cleaned of their prudish drapery to reveal nude spendour and bright mannerist colours. It’s fun to play connoisseur in this collection, to see if you can attribute works at least to schools (Venetian, Bolognese, Roman) and perhaps to major artists you know, or more minor ones whose names you might keep seeing in these smaller galleries. There is a remarkable portrait of a peasant eating beans by Annibale Carracci, a portrait attributed to Lorenzo Lotto (but it just doesn’t have his force), a Tintoretto, some Guido Reni, Veronese, Vivirarini…