Sometimes, the hunt for perfection makes it necessary to hike uphill. This is the case with Bramante’s Tempietto, which you’ll forgive me if I call a “jewel” of Renaissance architecture, for its size and perfection is much like a little, domed jewel box. 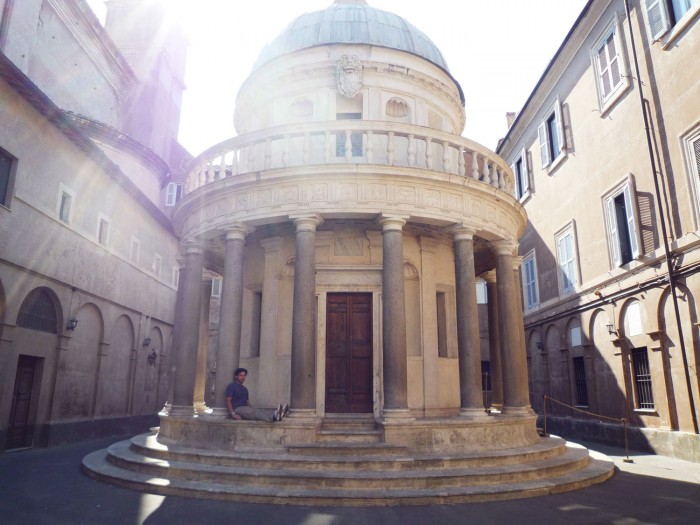 The Tempietto with a person in there for scale

The late 15th-century church of San Pietro in Montorio in Rome was built over top of an earlier one. It was home to Raphael’s Transfiguration (Vatican) over the high altar until the early 19th c. It contains an altarpiece by Antoniazzo Romano, a sculpture by Bernini and some important late Mannerist works.  Marcia Hall

suggests that the Del Monte chapel by Vasari and Ammananti is the first counter-reformation work in Rome (except for Michelangelo’s Pauline Chapel in the Vatican; p. 174).

On my very first trip to Rome, I made the pilgrimage up to this church mainly to see what is next to it: the Tempietto. I have since been back numerous times, and it always feels like a delicious discovery.

The tiny, perfect, and beautiful Tempietto by Bramante is accessed through a door at the right of the church (when open) or viewed through a gate outside to the right. The building is actually in the courtyard of the adjacent Spanish Academy, and you’ll usually see it photographed framed by the arch of the little portico in front of it. 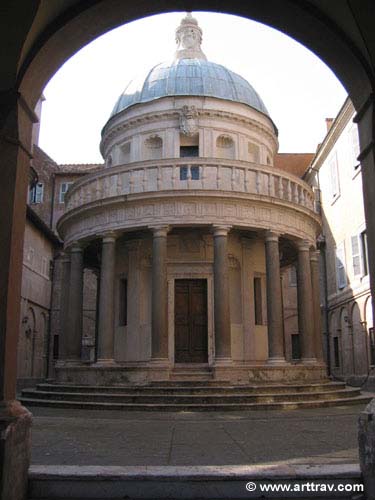 The church was built on the spot where Peter was thought to have been martyred and it represents one of the only executed plans for a circular church in the Renaissance, despite many artists’ obsession with this form. The interior is luminous and, of course, tiny. Bernini designed the crypt into which you can see via stairs at the back.

To get a sense of perspective, I photographed Tommaso sitting between two columns. This building is intended to be extremely accessible and easy to understand because it’s based on 15th-century theories of circles and proportions in perfect spaces that were believed to be intrinsically connected to the proportions of man. So, Tommaso in there makes sense. 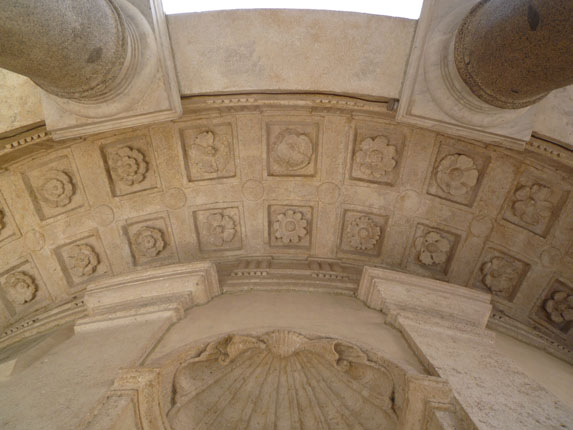 Detail of the carving under the roof

Small, antiquizing details are found on the exterior of the building, which you can get right up into and explore. Head on up the hill – it’s extremely likely that you’ll have this tiny piece of Renaissance architecture all to yourself.

Open 7.30-12; 16-18. The Tempietto is generally acessible during these hours, closed monday. The entrance gates are to the right of the church. The door to the Tempietto itself is rarely open.