The Chapel of Saint Zeno at Santa Prassede: mosaic revival and survival

I’m very lucky to host this guest post from Agnes Crawford, an architectural historian who offers intelligent tours of Rome. I remember being dazzled by the mosaics at Santa Prassede when I spent a month in Rome and started this website in 2004; had I had Agnes by my side I would have learned – and been able to write – much more about them. 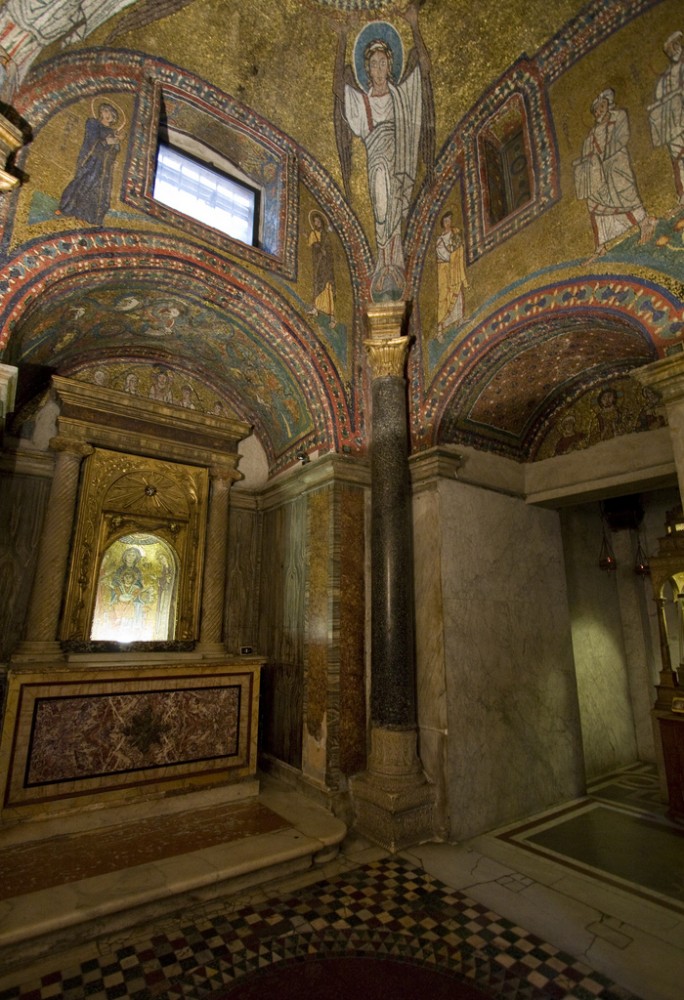 One of my all-time favourite spots in Rome is the church of Santa Prassede on the Esquiline Hill. Tucked down a side-street a stone’s throw from Santa Maria Maggiore, it offers some of the very finest medieval mosaics in the city, and is the most complete project of its period in the glorious jewel of the Chapel of Saint Zeno.

In 817, three years after the death of Charlemagne, Pope Paschal I was elected. Charlemagne’s support for the beleaguered Roman Church had been invaluable. He had been hailed as the new Constantine, and the city inherited by Paschal was one of optimistic ‘renovatio’, a sort of mini-Renaissance which sought to echo the glories of the early Church. Thus Pope Paschal planned Santa Prassede as small-scale copy of the Constantinian basilica of St Peter’s in the Vatican, complete with an internal courtyard between the main entrance and the internal façade.

Both the church and the tiny chapel of Saint Zeno in the right-hand nave were to be decorated in mosaic. On the one hand this reflected the ‘renovatio’ of the ancient Roman art of mosaic, on the other it was made possible by the arrival in Rome of Byzantine mosaic artists fleeing the reintroduction of iconoclasm in Byzantium. The mosaics at Santa Prassede can thus be considered both as the revival of the ancient art of mosaic, and of its survival, by way of the Byzantine world, the heir to the Eastern Roman Empire; this revival of the Early Christian age in Rome is felt, in part directly from Roman models, in part filtered through the Byzantine Empire. 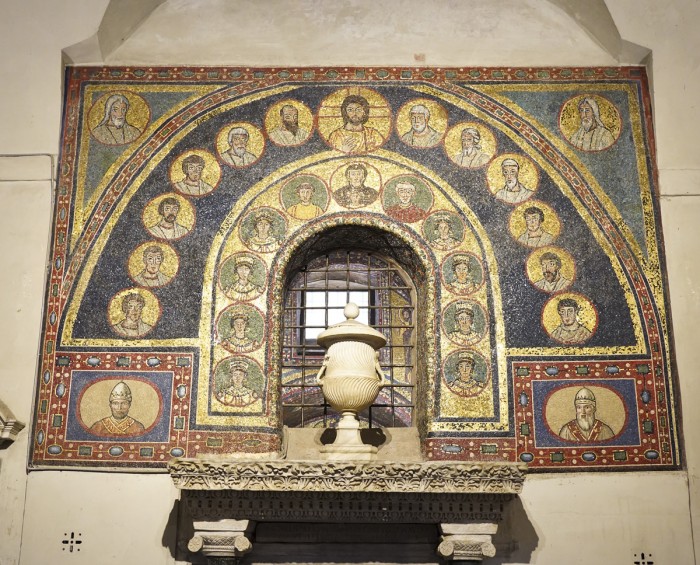 Entrance to the chapel of San Zeno | Ph. Alexandra Korey 2019

The small cross-vaulted chapel dedicated to St Zeno (one of the martyrs whose relics were brought here from the catacombs by Paschal and about whom little is known) was intended as the funerary chapel for Paschal’s mother Theodora. The chapel’s entrance gives an idea of the splendid mosaic decorations which lie within: the Virgin and Child, Saints Prassede, her sister St Pudenziana and their brother Saints Timothy and Novate are represented in the inner ring of medallions. The outer ring shows Christ and the apostles.

Put some coins in the meter by the entrance to the chapel before going in, and surround yourself in the rich brilliance of the mosaics that cover every bit of this space. As your eyes move around the chapel, the undulating forms of gilded tiles laid by hands dead for over a millennium offer varied reflections. The chapel is cross-vaulted; the vault’s support is indicated by the recycled ancient columns that are almost free-standing, barely supporting anything, just the sort of thing that would have had Vitruvius, the Roman architect par excellence, with his stress on functionality, spinning in his grave.

From the three-dimensional gilded capitals spring two-dimensional angels, reaching up to support the image of Christ Pantocrator (from the Greek, ‘all powerful’). These are a splendid example of current scholarly discussion about the stylistic origins of these mosaics; i.e. whether they demonstrate the revival, or the survival of the antique. Whilst they have been seen as depending on the 6th-century mosaics executed during the reign of the Byzantine Emperor Justinian at San Vitale in Ravenna, in turn the mosaics at San Vitale can be interpreted as being dependant on Roman floor mosaics. If this theory is accepted then the mosaics at San Zeno can be placed in a context which wends its way back to the Roman antique. 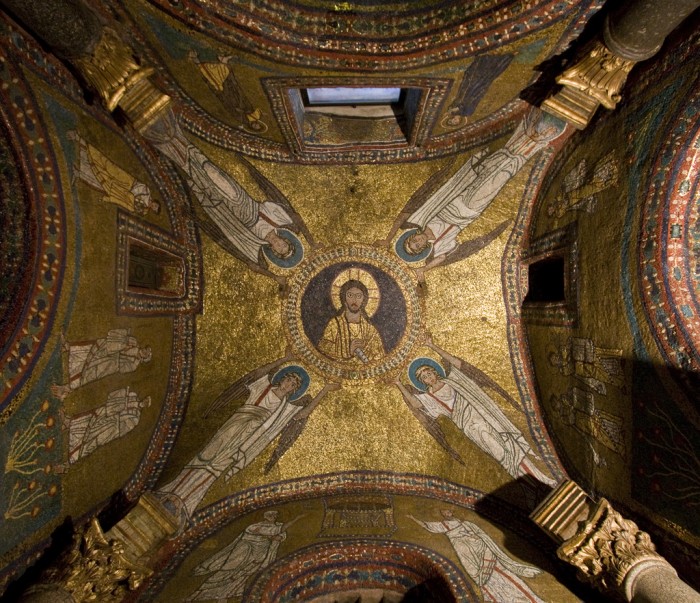 The Byzantine influence also immediately makes itself felt as one enters the chapel. Opposite the entrance wall the figures of St John the Baptist and the Virgin Mary indicate the (east-facing) window between them. This is thought to represent the Byzantine iconographical tradition of the deesis. From the Greek meaning ‘entreaty’ the deesis shows the John the Baptist and the Virgin Mary gesturing towards an image of Christ. In this case the image of Christ isn’t present, or rather he is above them (and indeed upside down on the ceiling).

However if we interpret the light of the window as heavenly light – St John the Evangelist says Christ described himself as the “Light of the World; he that followeth me shall not walk in darkness but shall have the light of life” (John 8:12) – then the window itself stands for the figure of Christ. This reading would have been well-known by the artists, and of course by the papal patron: in the 4th century, St Augustine had referred to this quotation, and added weight to it, by saying that Christ should not be considered as a simply metaphorical light; by the 5th century the description of Christ as “Lumen de lumine” had entered the Mass.

St John the Evangelist is shown on the right wall as one enters the chapel, holding his book. He is on the left hand side of the other window which illuminates the chapel particularly splendidly in the morning. Across the window from him are Saints James and  Andrew. 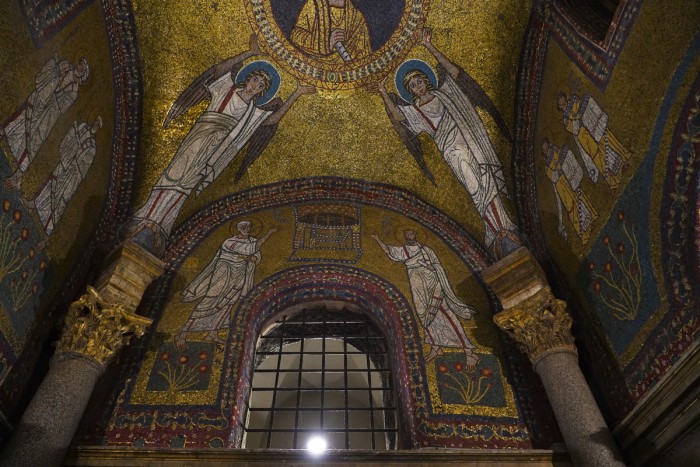 On the entrance wall, and opposite the deesis, is the representation of another eastern iconographical theme, the hetoimasia. The Greek term means “preparation of the throne”; an empty throne is that which awaits Christ’s return for the day of Judgement. In this case the throne is indicated by Saints Peter and Paul, protectors of the Roman church. The charming flowers at their feet are a reminder of the eternal spring. On the seat of the empty throne is a cross that is reminiscent of the Roman Imperial representation of the Emperor’s rule by his insignia resting on an empty throne; once again reminding of the renovatio here at play.

On the left wall as one enters the chapel, are the almost identical female saints, Agnes, Pudenziana (Prassede’s sister), and Prassede herself. In appearance somewhere between Roman ladies and Byzantine princesses, they again evoke the blend of Roman cultures the chapel represents. Beneath the arch the agnus dei, the lamb of God, stands on the source of four springs from which deer drink. Below, the Virgin dressed in blue is shown with Prassede and Pudenziana on either side, and to their left is Theodora, mother of Paschal for whom the chapel had been built. The blue ‘nimbus’ around her head indicates she was still alive when the chapel was decorated. 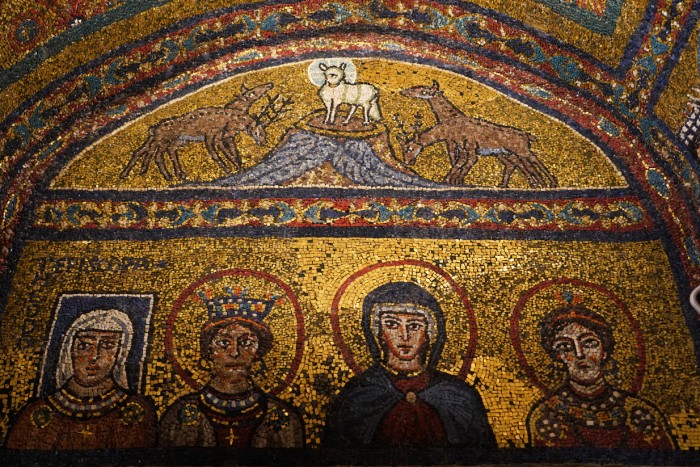 To the right of the female saints is the scene of the descent of Christ into Limbo, its lower part damaged by the later and rather brutally created doorway. Known in the East as the Anastasis, it is not mentioned in the scriptures but was a solution postulated regarding the problem of what happened to just people who had died before the coming of Christ. This theme first appears in the 8th century and was a creation of the Byzantine world; another reinforcement of the role of Byzantine influence on the chapel’s decoration.

As well being fabulously beautiful, the chapel offers a view into the hybrid of the revival of Constantinian Rome and the survival of the ancient art of mosaic filtered through the lens of the Byzantine world. Like any great work of art it is inextricably of its time; the tiles speak of the brief relief from the Church’s relentless struggle provided by Charlemagne’s support, the politicising desire to represent this through the evocation of the early glory of the established church at the time of Constantine, and the contemporaneous abolition of religious images in Byzantium which all came together to create this gem sandwiched between a kebab shop and an Irish pub.

Agnes Crawford has a Master of Arts degree in Architectural History from Edinburgh University and is a licensed tourist guide in Rome. Her company is Understanding Rome.