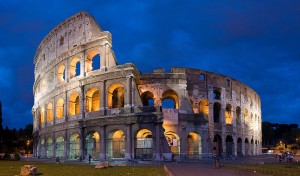 Diego della Valle for Tod’s (the fancy shoe company) has pledged 25 million euros for the 15-year restoration of the Colosseum. The proposal, made last August to the Soprintendenza, has been accepted and announced officially on January 21st 2011. The complete restoration of the building and the development of a new lighting scheme will be paid by the Italian company.

This is the largest instance of private sponsorship for restoration in Italy as far as I know. It’s also got a really interesting communication plan. Tod’s will be permitted to call itself the “single sponsor for the restoration of the Colosseum” and will be able to use information about the restoration in its stores and website. On site, I doubt that we’re going to see a giant shoe on the side of the building – unlike the obscene placement of advertising of the Bridge of Sighs in Venice. While clearly this sponsorship is in part being undertaken because it’s good for corporate image, it will be communicated in good taste. Tod’s will establish a foundation called “Amici del Colosseo” (friends of the Colosseum) that will communicate information about the restoration to the press and public.