This post from 2010 was written before Emiko Davies became a famous food photographer based in Australia. Before she had her own blog, she contributed this beautiful post and pictures about her experience making cheese on an organic farm in Tuscany. 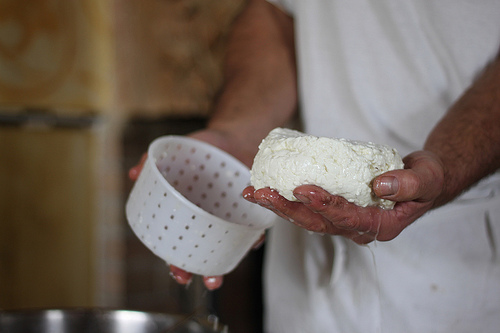 Blessed are the Cheese Makers

In one of the most beautiful places you’ll ever come across, near Pienza in the Val d’Orcia in Southern Tuscany, there is a farm that makes one of the most heavenly things on earth: cheese. Real cheese. Cheese that speaks to you of a place and the people who made it.

Pecorino cheese has long been famous in these parts. It gets its name from the word pecora, Italian for “sheep” as it is, unsurprisingly, made from sheep’s milk. There are many kinds of pecorino made traditionally throughout Italy, varying from region to region and sheep to sheep, the most famous ones being Pecorino Romano (from Rome), Pecorino Sardo (Sardinian) and Pecorino Toscano. In the Tuscan variety, Pecorino di Pienza is one of the most prized, traditional cheeses and was apparently even a favourite of Lorenzo the Magnificent. That said, Pecorino di Pienza is hardly produced these days as it was during Lorenzo’s time. Today much of it is sadly made with imported and pasteurised milk, creating a standard but rather characterless cheese, but there are a few artisan cheese makers who still strive to make it what it once was – a unique cheese that bears the character of the place it was made.

So I’ve come to taste some real pecorino and have a lesson on how to make it and ended up on a gorgeous property that sits atop a hill overlooking the entire Val d’Orcia and even Pienza itself. It’s a rustic, down to earth, organic farm called Podere Il Casale, run by a Swiss family who transplanted themselves here 20 years ago. 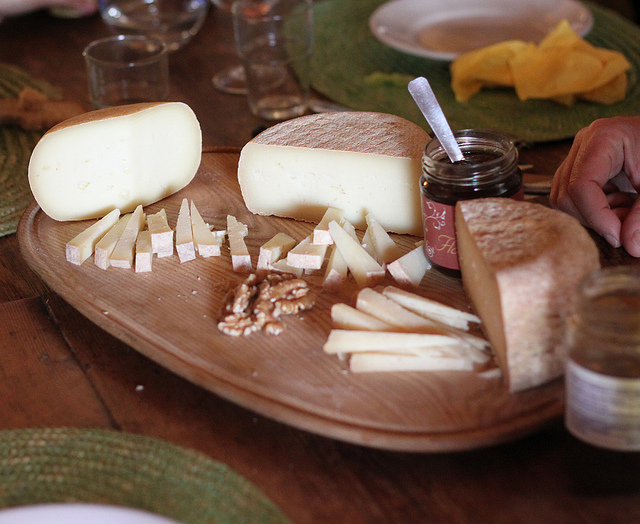 One thing that we often forget is that real, traditional cheese making is at the mercy of nature – the product itself has a life cycle that follows the cycle of the animal. Usually pecorino is made from Christmas time until the beginning of spring, when the farmer is able to get milk from the ewes. It’s right now the beginning of November, the wrong season for making pecorino (in fact the ewes have just given birth to their lambs just days ago so are rightfully fully occupied). The goats, however, more adaptable creatures that they are, have enough milk for us to make caprino – a beautiful, fresh goat cheese.

We start with a tub of five litres of unpasteurised goat’s milk gathered that morning to make around one kilo of cheese. To it is added rennet – in this case, calf’s rennet – to coagulate the milk, separating the milk proteins into curds and whey. 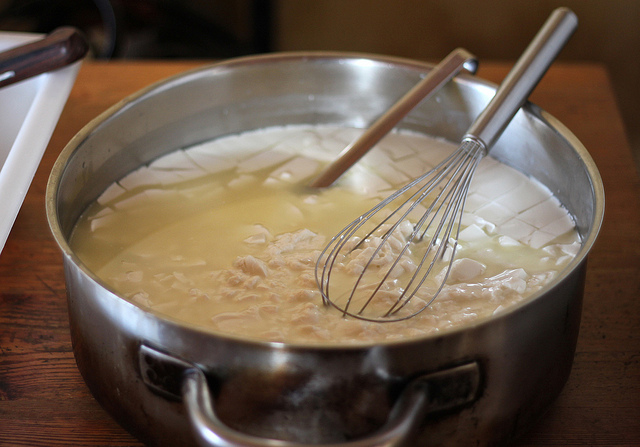 Ulisse, our cheese maker, explains that traditionally, if we were making a pecorino cheese, we could use a vegetable rennet known as presciura in Valdorcian dialect. Essentially it is a cardoon or wild artichoke with a purple coloured thistle-like top that grows sporadically all over the farm, and once grew all over the surrounding valleys. The spiky thistle is picked in full bloom, air dried and then infused like a tea to use for cheese making. 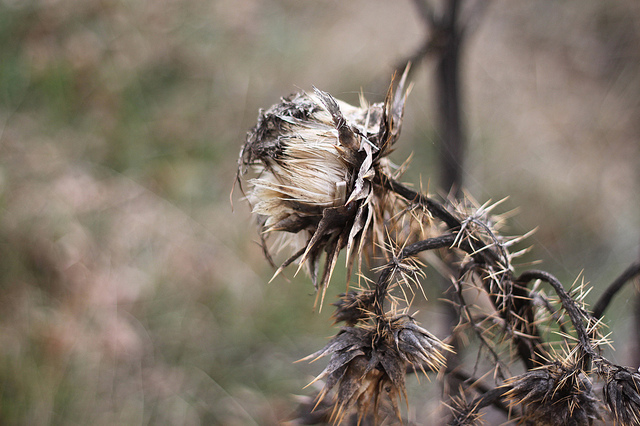 This, together with the naturally growing herbs and shrubs of the valley that the sheep graze on, gives the cheese its unique texture and character. Ulisse reminds us again of the role of nature in producing cheese – the local diet of the sheep affects the flavour and quantity of milk, when and for how long it is produced and in the end, the richness and quality of the cheese. Even though he’s a Swiss native, Ulisse is passionate about making cheese the way it has been made here for centuries.

As we sit there, listening to Ulisse recount the history of the local cheese and its traditional techniques, our goats cheese is showing that it is well and truly a live thing, growing and changing even as we speak. The curds are solidifying, transforming, taking on a silken tofu-like texture.

We try a few spoonfuls of the curds to taste – silky with a gloriously creamy texture. We take a sip of the whey; it is slightly sweet and delicious. Full of protein and very nutritious, whey is used to feed animals, make sports drinks or a reviving summertime drink when mixed with a little juice and even makes for a great skin treatment for those who want to bathe in it. In other culinary uses, cooking it longer simply makes ricotta. 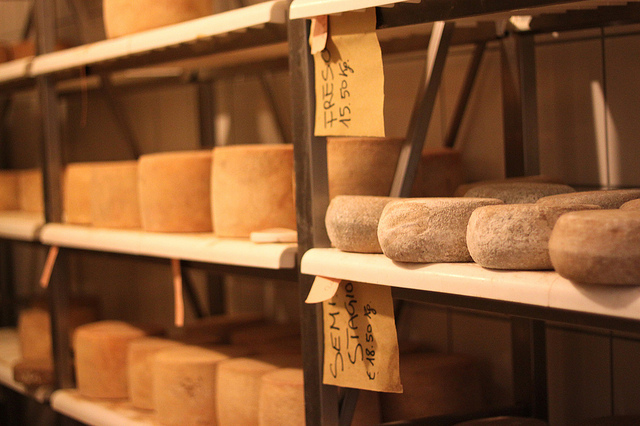 Most of today’s pecorino di Pienza is now a shadow of its former self, as its popularity has turned it into a factory product available year round rather than the cheese that Tuscan grandmothers in the area may remember. Milk imported from Spain or France now takes away the unique character that the local grasses and sheep of this valley added; importation and factory standards mean the milk is usually pasteurised, zapping it of bacteria and, many argue, the flavour. Depletion of the local presciura, the wild artichoke, to use as rennet means that more often it is made with another kind of rennet. All this, plus the fact that most cheese makers in the area are no longer Tuscan but mostly Sardinian, who bring in their own local traditions to the mix (Sardinian pecorino for example is usually made with animal rennet), means presciura is hardly ever an ingredient in pecorino di Pienza anymore. These factors were what once gave this cheese its stamp of uniqueness and character.

While our goat cheese gets moved into forms, drained and left to continue its transformation, we visit the cheese making rooms, the fridges and the cheese pantry – and the smell of deliciously ageing cheese fills our nostrils. The rounds of pecorino are left to mature until they take on a crumbly texture and deep flavour. There are terracotta vases holding rounds of maturing pecorino nestled in straw, and shelves of rounds covered in various stages of tastiness, er, mould. There is even a barrel full of the dregs of the local Avignonesi vineyard from Montepulciano (the leftover skins and stems of the grapes, usually used to make grappa) that are soon to become the home of more rounds of pecorino, to impart an unusual flavour and beautiful deep purple colour to the crust of the cheese.

We of course also visit the sheep themselves and even meet the day old lambs that have stolen our sheep’s milk. Raised without any type of antibiotics and treated with homeopathy, these are some gorgeous sheep. A Sardinian breed (they were introduced to the area as far back as the 19th century), the sheep are smaller than the local breed used to be, but hardier. 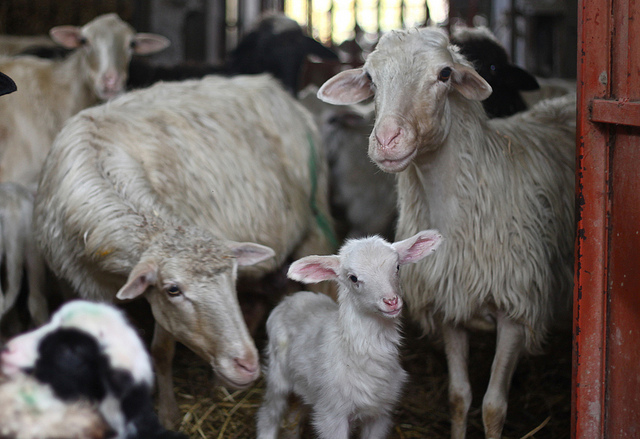 By the time we get back to our goat cheese, it is ready to be sliced and served for lunch with some freshly baked spelt bread and a tasting of five of the farm’s other cheeses, including three exquisite pecorino cheeses, from a smooth, younger cheese to a sharper, crumbly aged round. Drizzled simply with some extra virgin olive oil, so fresh it’s bright green, and sprinkled with chilli, our freshly made goat cheese is delicate, slightly sweet-acidic and oh so rich and creamy.

There I am at the farm, relaxing with a glass of local wine and my plate full of cheese, including the one we made that morning. And there, surrounded by farm animals, peacocks and the Val d’Orcia’s stunning backdrop seeped in autumn colours and Pienza winking at me from the next hill, I realise that there’s no doubt this cheese is even more divine because it’s eaten right here, in situ, and has only travelled from the barn door to the farmhouse. I suggest you try it.

The photos are all by Emiko Davies and used by permission; they are protected by copyright.

You might like these related posts: How to make pecorino cheese (video); Take the kids to an organic farm; art history in the town of Pienza.