Finding one’s self in the Chianti Sculpture Park

I have a confession to make. I rarely experience art alone. Although I’m a perfectly independent woman, I usually share travel, and thus art-viewing, with my husband, or with friends. I’m a big believer in the social value of seeing exhibitions with others, creating opportunity for dialogue and shared experiences. On the rare occasion that I see a temporary show or something on my own, it’s usually for the purpose of review, and I tend to be quick and analytic. 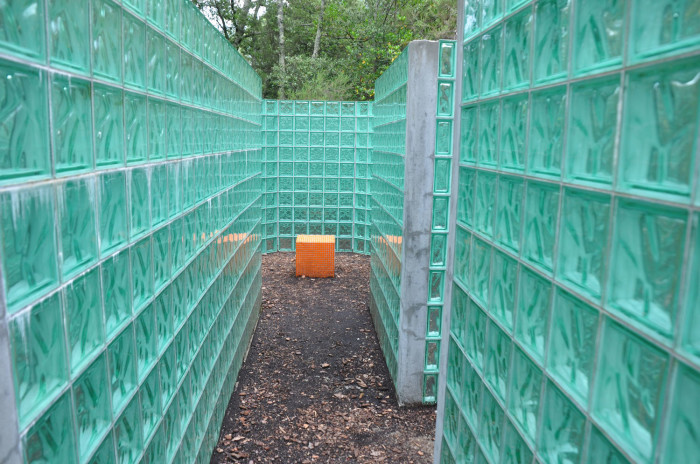 Recently, I allowed myself to just let go and experience the art at the Chianti Sculpture Park, alone. It’s no big deal, it’s an hour’s walk on a path in the woods, it’s not like I walked the Sahara desert solo, but it’s something I want to cherish. Being alone in this art park helped me connect to the art, the space and to myself.

I arrived at the art park, accessed by a rather long drive on an unpaved “white” road, on a summer weekday afternoon, having been to visit Dievole, a winery and client to whose blog I contribute. There were four Germans in the park who entered just before me, but we kept some distance from each other. I don’t think the park is often overrun by tourists. Equipped with a free multilingual IOS app and armed, unnecessarily, with a sunhat and bug spray, I went on my way along the clearly marked path in the woods. 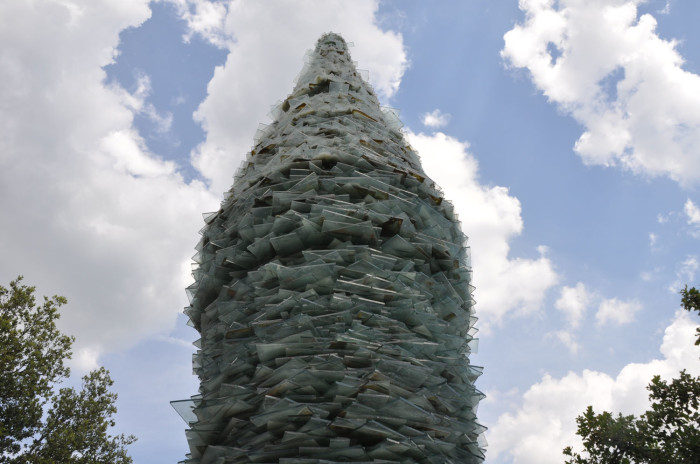 Looking up at Energy

The park’s owners, Piero Giadrossi and his wife Rosalba (who considers the nearby art gallery to be more her realm), invite international artists to pick a site-specific space in the woods and create a work. It is immediately clear that all are somehow inspired by this place, but some choose to work with it in a more harmonious way than others. Glass is oddly dominant as a medium, and although it seems to contrast somewhat with the environment, I seem to be drawn towards these works. 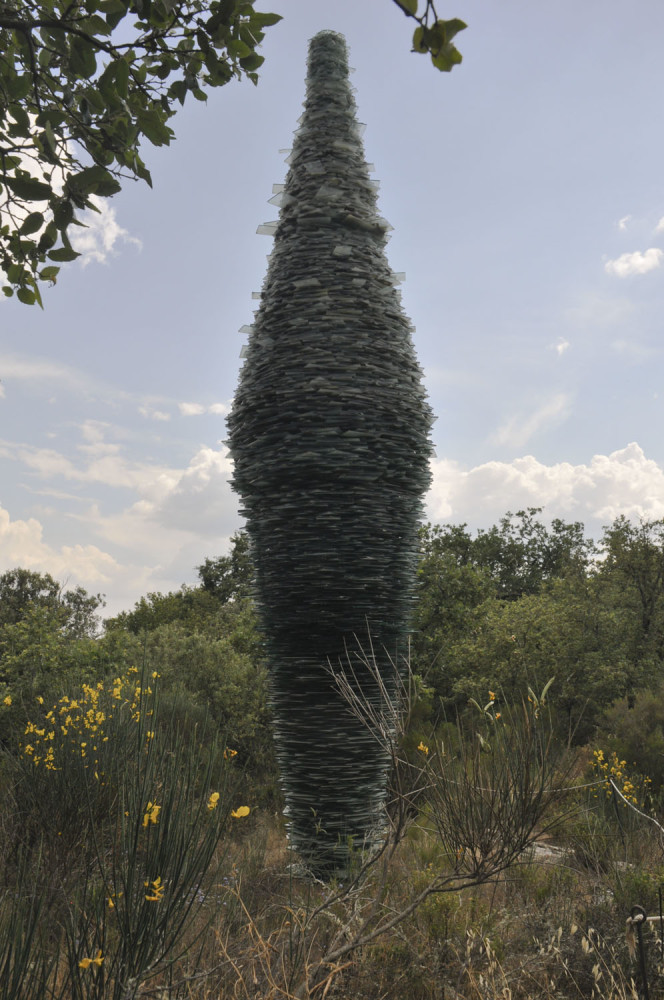 Maybe it’s my own need to harness my creative energy that draws me to the very tall and very jagged representation of Energy by Greek artist Costas Varotsos. The work juts up, building up energy from the ground, widening, moving, and tapering off. It’s like a blown up detail of a section of a sound wave. I like how it breaks with the more yellowy green of the forest and brings in a colder green, its man-made shape contrasting with the trees around. 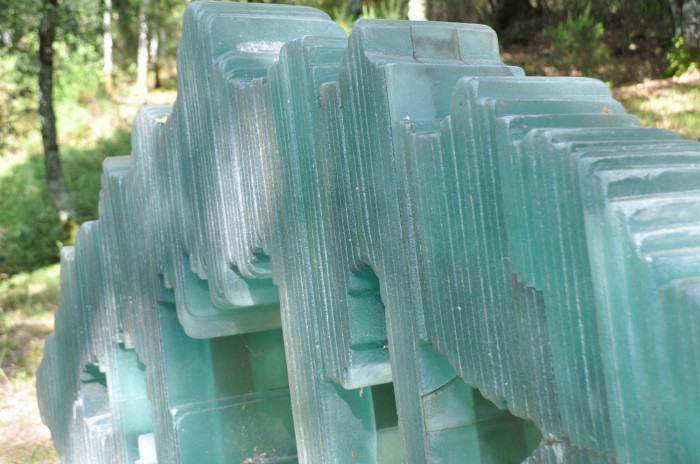 It’s interesting how glass is also used by Yasmina Heidar from Egypt for Falling Leaf, a sculpture that sits there like an exaggerated 2 meter, 550 kilo enlargement of a natural shape. Despite its weight, glass makes it seem light. It reflects the woods around it, and is smooth to the touch. 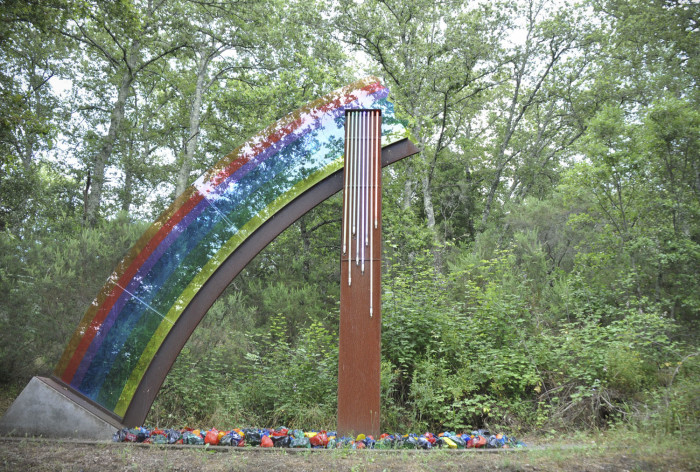 Coloured glass attracts the viewer of Federica Marangoni’s Rainbow Crash, which combines transparency and opacity in multimedia. A transparent rainbow is held up by a rusted iron structure, emphasized by neon lights, and finishes in a pile of colourful kiln waste. The latter is highly appealing though I can’t explain why. Maybe because it’s one of the strongest colours in the woods, maybe it’s for the joyous concept – if a rainbow ever did crash and leave detritus, would it look like this? 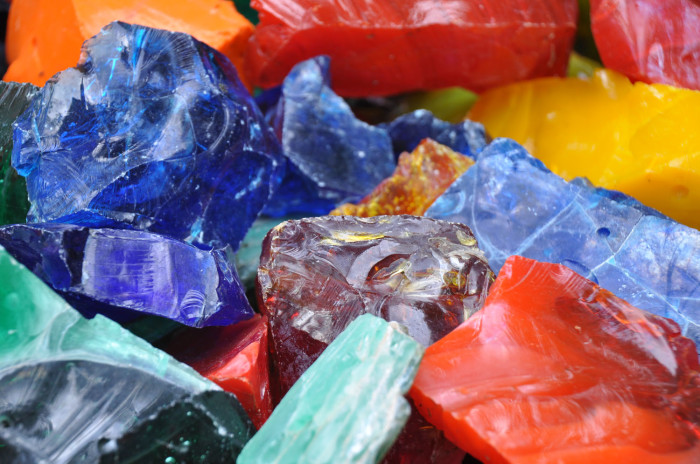 Rainbow crash, detail of base

There’s also glass to get lost in, in this park. Or glass in which to find one’s self. The Maze by Jeff Saward is one of the works that I think Piero is most proud of. He contacted the president of a maze society and called for a labyrinth to be made in his park. The president didn’t answer for a while, and then wrote to say he hadn’t passed on the call because he wanted the commission for himself. Saward has designed such spaces around the world, in Hawaii and in Ireland. For the Chianti art park he reconstructed, on a grand scale, a design that had been carved in a rock in the Lombard Alps around 750-500 BCE. A modern twist is given by the use of glass blocks to construct the space. Perhaps not my first choice (I associate this material with 1980s public works), it causes a feeling of disorientation as it distorts reflections. 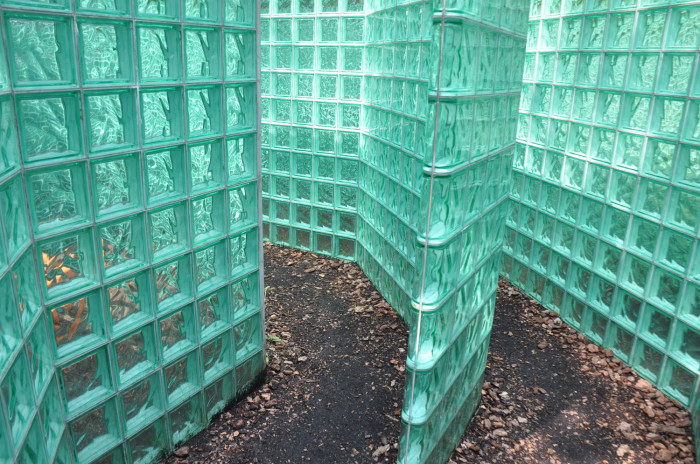 I entered the maze only because the audioguide promised that by walking straight, one does get out. The maze looks small from the outside. I start walking. I pick up my pace. It seems to go on for a long time. I start to get a bit scared as I wonder if I’ve been tricked. Am I perhaps going around in circles? Calm, trust, I’m sure an exit will appear.

At the center, an orange cube. And a mirror that says “SELF”. 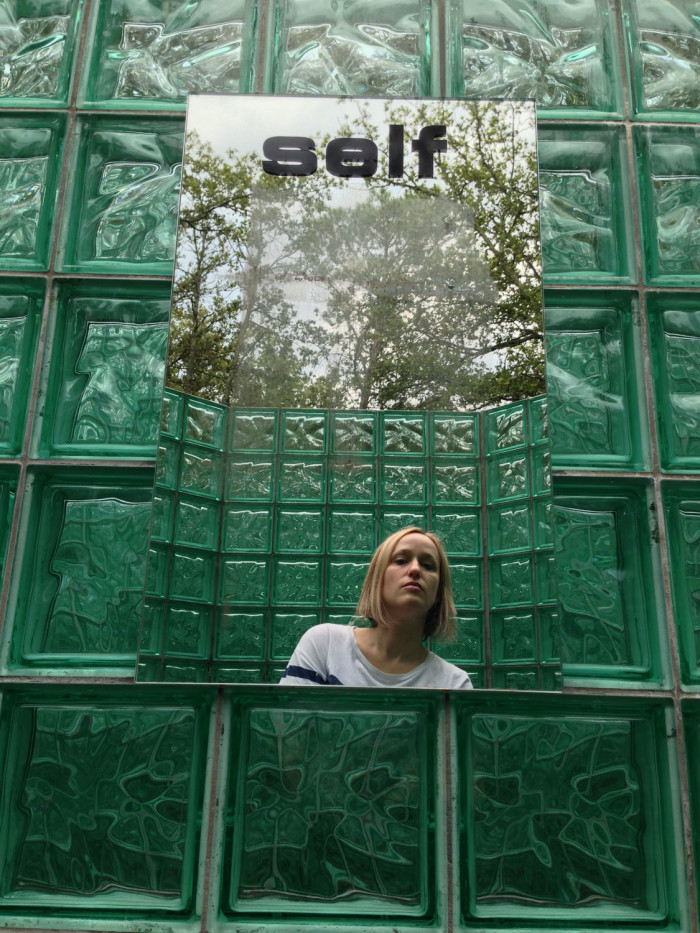 I feel strangely calm as I proceed through the rest of the park. One more work in particular sparks my imagination. It’s not in glass, but in highly polished marble, of two different colours. American Neil Barab’s Twist and Shout curves up in a parody of the trees around it. I wonder if they have been heated by the summer sun, or if they have preserved a primeval coolness. I lay a hand flat on them, I hug them. It’s oddly comforting art. 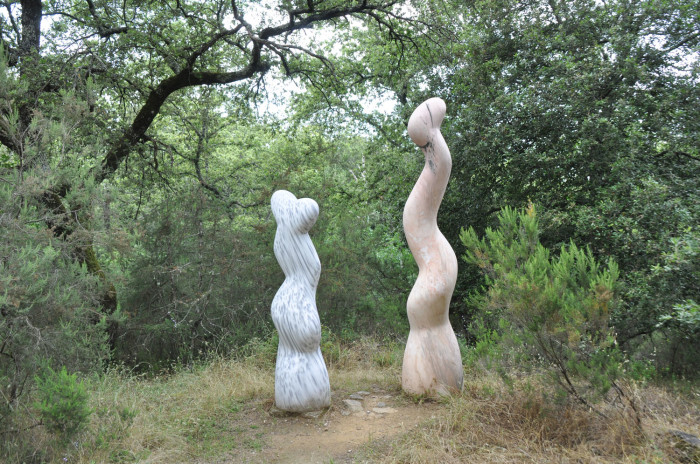 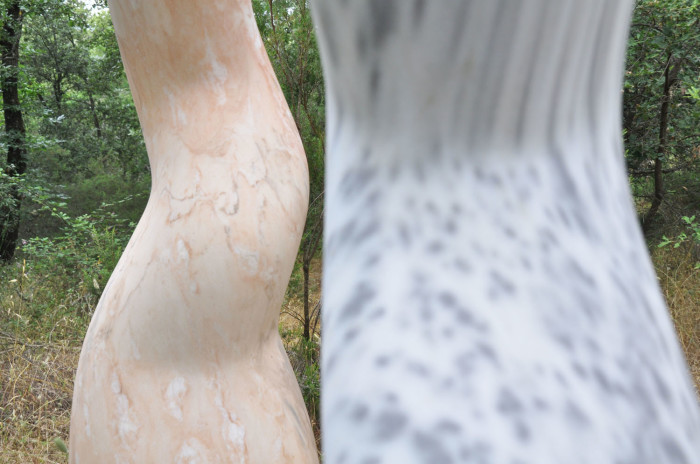 There are numerous works in this park, and each is worth discovering. Each speaks to the viewer in a different way, which is why it’s important to let the art IN. Many of the works specifically ask for dialogue, such as the listening platform called, precisely, Dialogue, by Anita Glesta (you’re supposed to lie on it and listen to the forest, and look at the trees swaying above). Or The Thinker, one of the park’s few figural pieces, who invites you to have a picnic with him at a stone table. 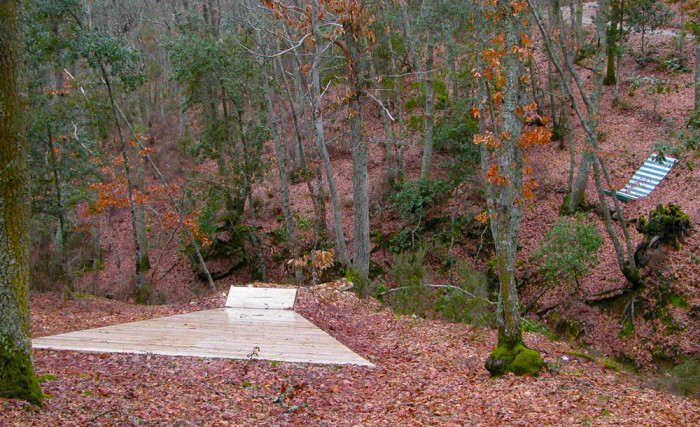 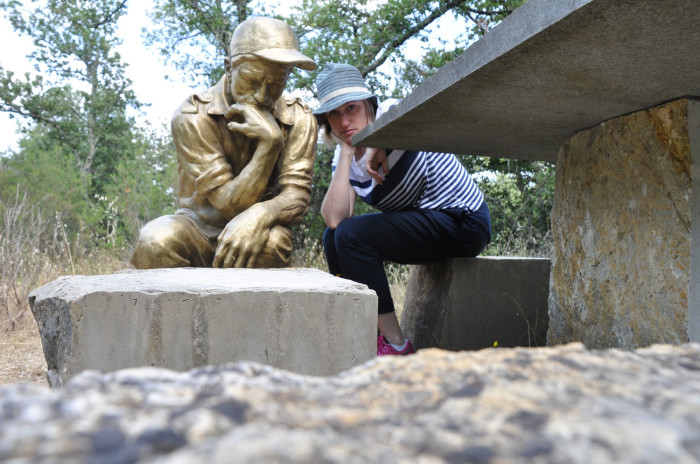 At the end of the visit, across the street is the owners’ private house-gallery. They live in a restored brickworks factory that has a wonderfully breezy terrace where terracotta was laid to dry. I was welcomed by Rosalba, whose unique collection is for sale. 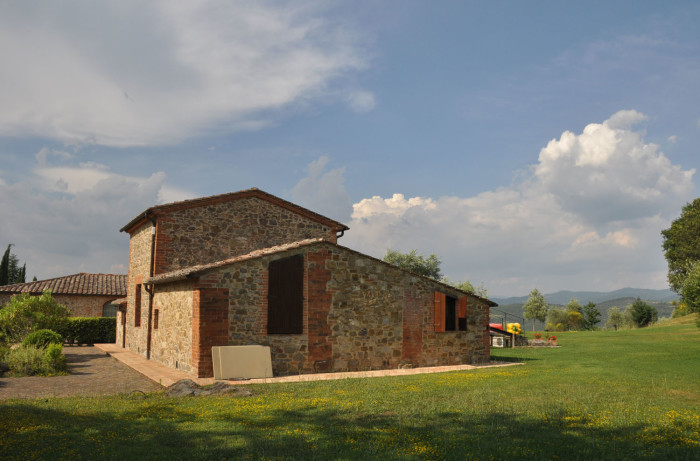 The park is open daily from 10am to sundown, though if visiting in the winter months, reservation is recommended at +39 0577 357151.   For information, see www.chiantisculpturepark.it.