The Easiest Day Trips from Florence by Train

I frequently speak to travelers who say they are going to spend some time in Florence, and take a few day trips. If you’re spending a week in the city, Florence is a good home base from which to take one or two easy trips to nearby places in Tuscany. The Santa Maria Novella train station, located in the center of the city, quickly connects you to other art cities and charming small towns.

Train travel is relatively cheap, and the timetables online are easy to understand. It’s child friendly, since you can walk around, and there are even toilets on board (bring your own paper and disinfectant). Some towns in Tuscany are only reachable by bus, on some pretty bumpy roads, and may require changes; I find this complex and uncomfortable. So I’ve developed this list of the easiest day trips from Florence by train, focusing on places you can reach in 1.5 hours or less, with no train changes.

One of Tuscany’s most underestimated towns, Prato is something of a satellite city, with a lot of people living here and working in Florence. But it’s also Tuscany’s second largest city (third in central Italy after Rome and Florence!), and perhaps its most important industrial producer. It is also the largest Chinese population, some 15%. If you’re dying for a little Chinatown and authentic Chinese food, you’ll find it here. Or get slightly out of downtown and find a gritty industrial area, perfect for photos (follow @marcobadiani on Instagram for that). But you’ll also find a charming pedestrian-only historical center, a textile museum, a nice city museum (Palazzo Pretorio), some important churches, and the official home of the cantuccio (or biscotti, as it’s known to Americans).

Historically, Prato has always been an important producer of wool; although the economy has swung towards Asia, it still is well known for its textiles, especially for a heavy recycled wool called Cardato. The town’s most important historical figure may be Francesco Datini, a late medieval merchant – spot his statue outside his palazzo in the city center. A church by Antonio Sangallo, Santa Maria delle Carceri, is a personal favourite. Nota bene: the stores downtown close for lunch (around 1pm, they reopen around 3:30 or 4pm) so time your visit carefully – it’s rather empty and boring at that time. Find out the top 10 things to do in Prato according to The Florentine. 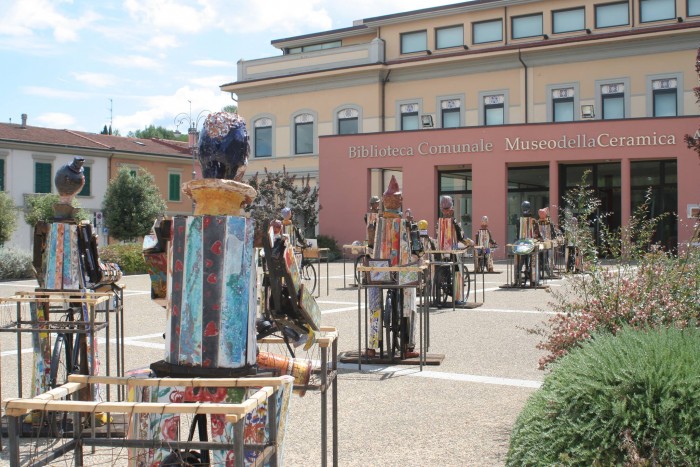 Another Tuscan town that doesn’t see a whole lot of tourists is Montelupo (Fiorentino), but it’s worth visiting if you like handmade ceramics. This town historically produces maiolica (tin glazed ceramics), and has focused on that as a tourist attraction. A newly renovated maiolica museum (you can see it from the train as you arrive!) traces the history of this art, with spectacular examples from the 12th century to the present day. A compact “main street” is lined with cute bars and shops run by artisans selling ceramics wares – look for those with a person actually working on painting if you want to be sure it’s 100% local.

Lucca is one of Tuscany’s major “art cities” and has increasingly been on the tourist radar in the past ten years. A walled city at sea level, it’s entirely pedestrian inside the walls, thus really charming! The most famous thing in Lucca is probably the Piazza dell’Anfiteatro, an oval shaped space delineated by a second century Roman ampitheatre, and lined by 19th century buildings containing shops (that look rather medieval!). This large space is used for a regular market, and during Christmastime it’s particularly adorable because it’s lit up and has the city’s big tree at the centre.

Lucca is known as the city of 100 churches, but the 2 main things to do are walking or biking along the town’s wide walls, and walking up a tall tower (Giunigi) that is topped by trees. This article by Travelettes has more. 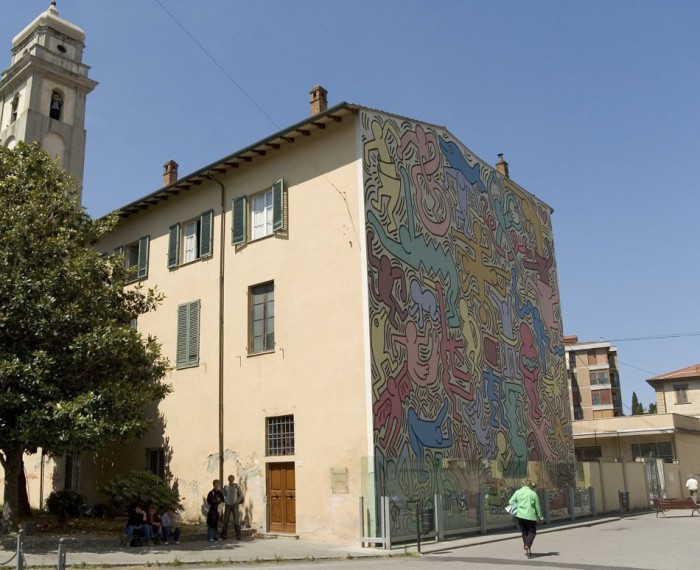 Pisa is on most travelers’ bucket lists due to its famous Leaning Tower, which I think is a bit underwhelming. But the city itself, wide and divided by the Arno River, is worth a day trip – not just a blitz visit to the Campo dei Miracoli. There are a good number of minor museums to check out, as well as gardens. The Palazzo Blu also holds monographic exhibitions of important modern artists (Chagall, Mirò and most recently Toulouse Lautrec). And do search out the last mural ever done by Keith Haring, called Tuttomondo. 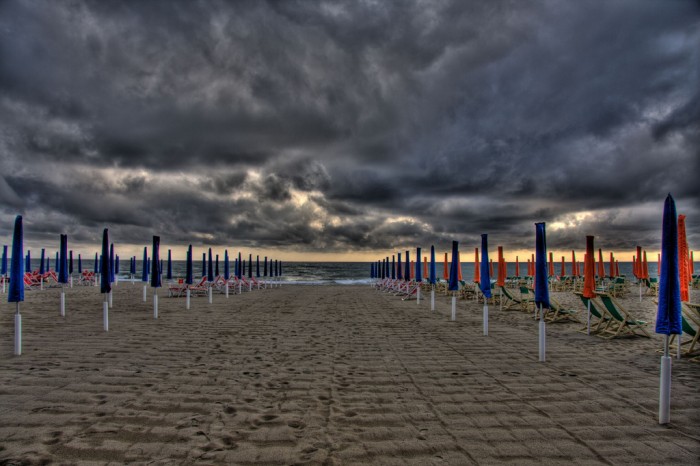 If you feel the urge to see the Mediterranean sea, Viareggio is your best bet in terms of easy transportation. A direct local train takes you straight to this seaside town, and the train station is about half a kilometer away from the beach. The beaches in Viareggio are, as in most of Tuscany, mostly “stabilimenti” that you have to pay to enter and rent an umbrella and chairs in the summertime. These places have to let you pass to access the water, where you are free to walk along the edge, but not sit. There are free beaches (spiagge libere) available, just ask someone where the closest one is. In the summer, it is crowded here, and the water isn’t the cleanest in the region, but like I said, Viareggio gets points for its convenient location. Click here for more about beaches in Tuscany.

In wintertime, the stabilimenti are all boarded up so you need to find an open access to the beach in order to go for a walk along the pleasantly uncrowded, flat sand. In the off-season, take the time to spot and photograph the city’s beautiful Liberty (art deco) architecture. In February, Viareggio becomes animated with its famous Carnevale processions – if you want to attend one (weekends only) you must book tickets online. 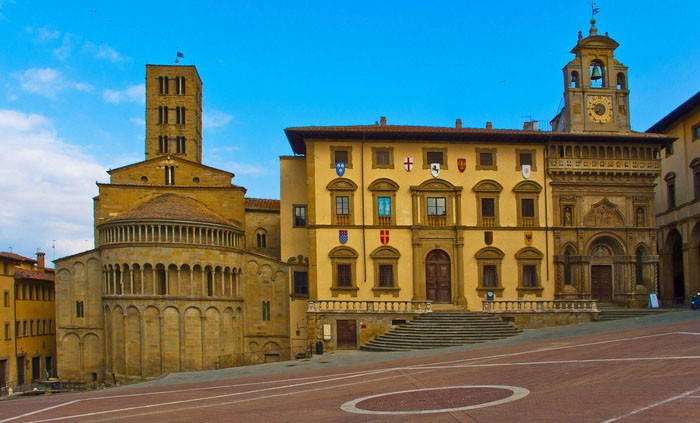 If you’re in Florence because you love Renaissance art, hit up Arezzo, an hour or so away on the train, for a different “perspective”. Piero della Francesca – whose portraits of the Duke and Duchess of Urbino you can see in the Uffizi – painted the high chapel in this city’s church of San Francesco. The complex fresco cycle, representing the Story of the True Cross, is one of the most influential of the early Quattrocento, in which the artist worked out his maniacal ideas of space (based on one-point perspective), populated by serene figures with egg shaped heads.

The rest of the town also offers enough for a solid half day visit (or more) – see this handy description of churches and museums in Arezzo from Tuscanyarts. If you enjoy crowds, come on the first weekend of the month, when almost the whole city center becomes a gigantic antique market. 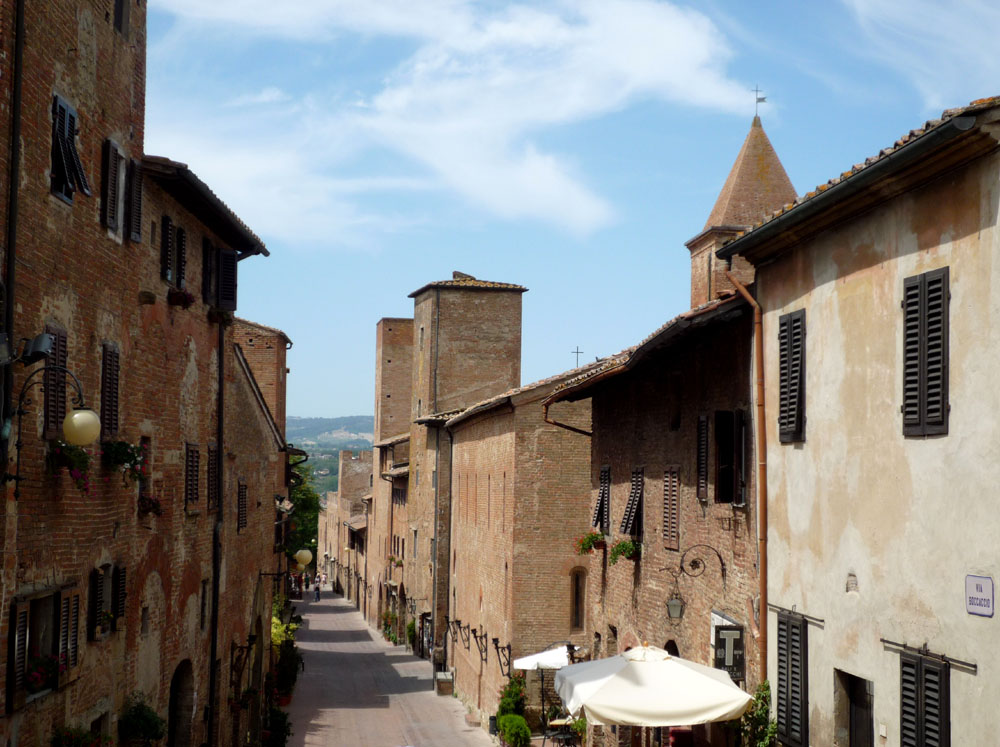 View down via boccaccio from palazzo pretorio, Certaldo

If you’re traveling to Siena, the suggested mode of transportation is the bus, as it takes 50 minutes and deposits you more centrally in the city. The regional train line to Siena isn’t great, and the trip will take you a minimum of an hour and twenty minutes. Along the same train line, you can easily reach the rather charming and historically important town of Certaldo, however. Hometown to Boccaccio, the hill town is nicely preserved and perfect for a stroll to explore its cultural offering – a few small museums, and a nice city hall. It’s also a good place for a truly Tuscan lunch. 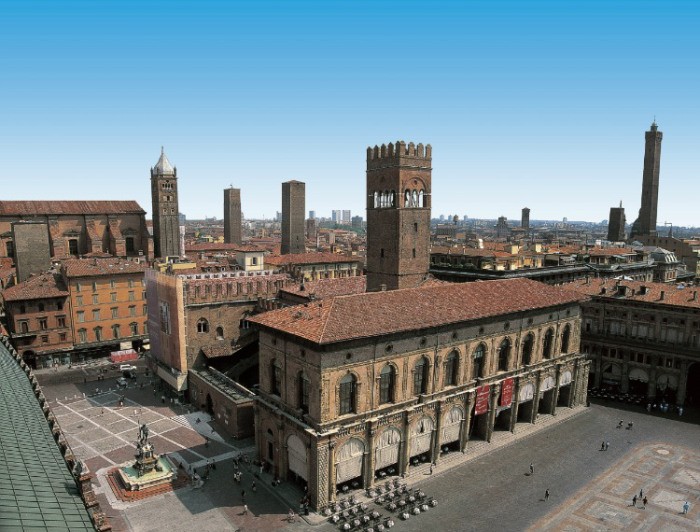 Although outside of Tuscany and a bit more pricey to reach (unless you want to take the very slow regional train), the fast train takes you to Bologna in just over half an hour. Being on the other side of the mountains, I often forget to visit this largish university town that actually has a lot to offer. For what to do here, I suggest reading the blog by Silvia Donati, Bologna Uncovered!

The train system is really easy to use. For as much as we complain about Trenitalia, which does have delays and dirty trains, it’s not bad, and it’s pretty cheap. The website www.trenitalia.com is the best way to check timetables and purchase tickets online. You need to register to create an account to buy online, and the process can sometimes be frustrating (if you need a “fattura” or receipt it requires a degree in business to figure it out), but most of the time you end up with a ticket in hand. Regional tickets purchased online MUST be printed out, so don’t buy that unless you have a printer. You can also buy them from machines, as well as from humans, in any train station anywhere in Italy. Regional tickets are valid to use at any time for four months from purchase date. For tickets to the short “commuter” destinations like Prato, Empoli and Montevarchi, you can also buy “biglietti regionali” from specifically marked machines that spit out smaller tickets, or ask at the newspaper shop at the train station (where the line is usually faster than at the machines or regular ticket wickets).

Remember to stamp your train ticket in the machines on the tracks before getting on the train. If you forget to stamp it, walk through the train and find the conductor before he finds you and attempt to explain, apologetically, that you were in a rush and forgot, and could he “obliterate” it for you – this technique is generally accepted, although it could backfire. If you cannot find him, you can write the time and date on your ticket in pen and, if he comes around, again, try to explain to him before he starts trying to give you a fine. These are not “official” methods – best to remember to stamp it!

The one problem to be aware of is train strikes. If you find out that the day you’re taking a trip on a regional train, there is supposed to be a strike, avoid traveling. There are some “guaranteed hours” during which trains will run, and some longer run trains like the Frecciarossa will run all day, but regular regional trains (the kind suggested in this article) will be canceled. If you get on a train in the hour before a strike starts, the train may, without notice, stop at the strike start time, wherever you are (that is not your destination). There is no simple, reliable list of strikes available in English. This website lists all the strikes in the country, in Italian, but is not easy to get through, and strikes may be “rimandato” (cancelled) at the last minute. To be safe, you can google “sciopero” + your travel date + treni and hope you don’t find any results (check the year).