Finally a guidebook for the Maremma!

When I first started hanging around in the Maremma area of Tuscany almost 15 years ago, I remember perusing some Italian guidebooks at a newstand. To put it bluntly, they were very boring. It’s taken another straniera, a foreigner, to finally write a good Maremma guidebook. Elisa Scarton Detti describes herself as an Australian journalist who came to Tuscany for a year and fell in love. Unlike the many of us who ended up in Florence, she’s one of a handful of expats who have settled in the heart of the Maremma. Over the years she’s built up an excellent website – maremma-tuscany.com – on which she has systematically shared her observations on things to do in each part of the Maremma. The full version of this years-long project has finally been published as the Travel Guide to Maremma Tuscany.

I asked Elisa to tell us more about her book and also suggest some travel tips for the area. 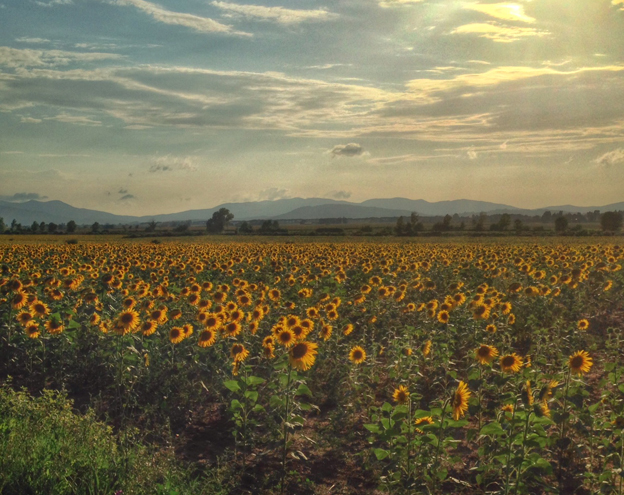 Why did you write a guidebook about the Maremma?

I’ve been living in the Maremma for just shy of a decade. My first experience of the province was as an English teacher. I remember receiving my assignment and Googling the Maremma. All I got was hits on the sheepdog. He’s incredibly cute and safeguards penguins in Australia, but he should in no means outshine what is one of the most beautiful sections of country Tuscany.

There is a beauty, passion and charm to the Maremma that you won’t find anywhere else in the world. And maybe it’s because I’m around the ‘breeding age’ that I feel oddly motherly about it. I want the Maremma to get the recognition it deserves. It’s that simple. I wrote this guidebook because I wanted to share the love. The Maremma will never parallel Florence or Siena, but if one person picks this guidebook up and is inspired to visit Saturnia’s hot springs then I’m happy. And if they can do that and not get lost thanks to my guidebook then I’ll be overjoyed. 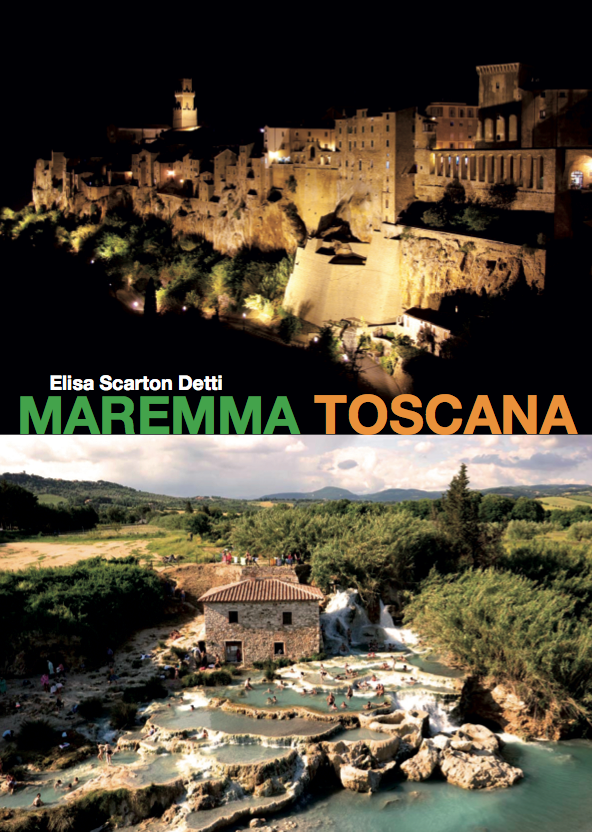 Surely there are other guidebooks for the area? How does yours differ?

There aren’t. I spent months scouring the province looking for guidebooks. I stumbled across one Italian guidebook that split the province into incomprehensible itineraries and one terribly translated English guidebook with a talking turtle. And that’s all there is. A short while before my guidebook was published, another English guidebook hit the market. The translation was still rubbish, but they got rid of the turtle.

I wanted something that sold the Maremma. I wanted readers to pick this book up and feel like they had to see the region. Half the battle with the Maremma is getting people to notice it. The other half is providing the information they need to truly enjoy and appreciate the province. That’s how my guidebook differs. I didn’t use Google translate or turtles. I spent three years scouring every corner of a province that makes up two thirds of Tuscany. I spoke to the locals, visited every attraction and read endless legends and folktales. I wanted my guidebook to be more than a list of the main sights. I wanted it to capture the spirit and traditions that add colour to the Maremma and make it such an unforgettable destination.

The guidebook seems to be connected to your website and blog Maremma-Tuscany.com. How do the two differ or overlap?

The guidebook was born from my website and blog, and builds on it. The website gets the information across in the most user-friendly way possible, while the guidebook captures your imagination and goes beyond the basics to share stories, customs and traditions. It’s very much inspired by literary journalism and the great travel stories. You pick it up and don’t just have addresses and opening hours, but photos and, hopefully, prose that inspires you to add Castiglione della Pescaia or Massa Marittima to your holiday plans.

I wanted to take readers on a journey and share the insights and insider tips in an armchair-friendly way. 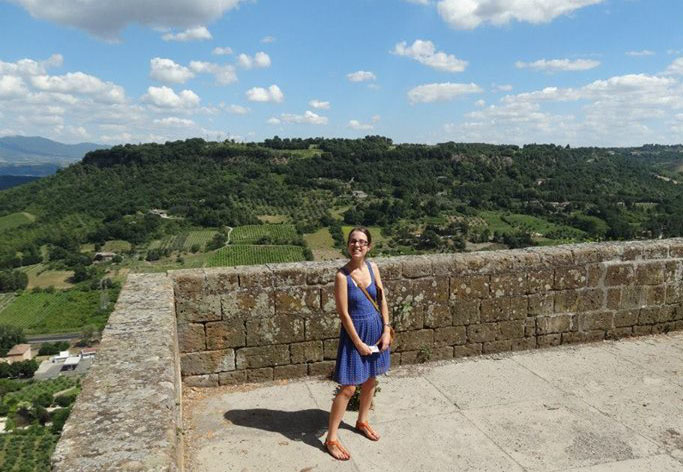 I notice that much of the guidebook is in the first person singular – there’s a box at one point that says “My little interlude”. Tell us about this personal approach, it’s an unusual choice.

In my opinion, the Maremma is the most beautiful place on the planet, but I might be the only one who thinks that (bar a few dead-set Maremmani). If I wanted readers to get excited about the Maremma and really feel like they had to see it, I had to go beyond the basic travel guide format. If you want bland, listed information, hit up Wikipedia. This guidebook is the fruit of almost a decade living and exploring the Maremma. I don’t think I went more than a page without sharing some insider tip, bit of gossip or century-old story picked up on my travels. I was lucky enough to explore every inch of this province with a local expert beside me and every one of them took me on an adventure that I couldn’t exclude. That’s probably why the first draft was hundreds of pages long. There was just so much about the Maremma that I wanted to share. I wanted to write the whole thing in first person, but it drove my editor mad, so I had to settle for just a few snippets here and there. But this is still my insider’s guide to the Maremma not some droll book of places and monuments.

You mentioned that the publisher, locally-based Edizioni Effigi, decided quite at the last minute to translate it into Italian, so it’s actually available in both languages. This seems like an amazing vote of confidence – a “foreigner” writing a local guidebook!

It was a vote of confidence. I was lucky enough to be at the forefront of the travel guide market in the Maremma. No one was writing anything like it when I approached Effigi. After they considered the project and worked on it, they saw its potential. Italian visitors need just as much information about the Maremma as foreigners.

I wrote this guidebook with the fantastic assistance and collaboration of local guides, museum curators, historians, art historians and really, really enthusiastic locals. It’s part of the reason why it took me so long to write it. For the better part of a year, I was in my car driving around the Maremma meeting up with locals and exploring their towns with them. I think my publisher appreciated that and felt more comfortable translating it with the knowledge that a lot of locals had contributed. I was also lucky that my translator was a local and Maremma buff, so she fact checked and added her own enthusiasm to the product. 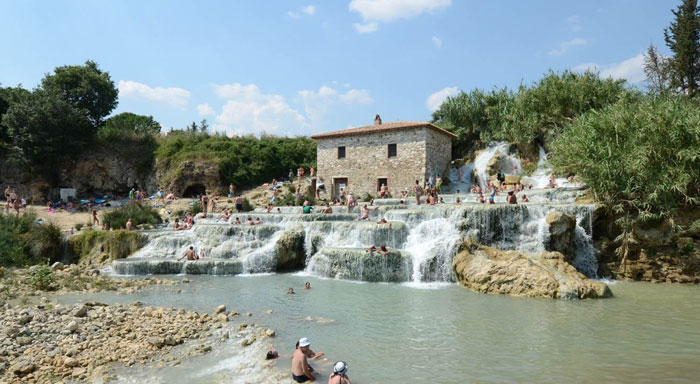 Why should people visit Maremma?

This is Tuscany off-the-beaten tourist track and Italy before the gimmicky tourist menus and tacky souvenir shops. Most Maremmani think agriculture is still the province’s major export. It’s not. It’s tourism, but it’s this agrarian charm that makes this such an unforgettable part of Italy.

It’s not all sunflower fields and rolling hills. The Maremma has a diversity that is incredible. From Niki Saint Phalle’s beautiful modern art garden to the Terme di Saturnia’s luxury spa, the Maremma is always surprising me. We have some of Italy’s most beautiful beaches, a ski resort, five Michelin-starred restaurants, two islands, some truly spectacular Etruscan archaeological sites, our own breed of cow and horse, truffles and porcini mushrooms, award-winning saffron, Picasso paintings, Medieval cities, hot springs, nature parks and cosmopolitan seaside towns.

But what I truly love about the Maremma is its sense of identity. The locals aren’t Maremmani or even Tuscans. They are Mancianese, Pitiglianese, Grossetani and the list goes on. To visit each Maremman town and city is to visit different little world. The locals are proud of their individual history, the stories they tell their children and dishes they serve at their dinner tables. You’re never bored, no matter how long or how far afield you explore the Maremma. Every inch has its own identity.

What is the best time of year to visit Maremma? 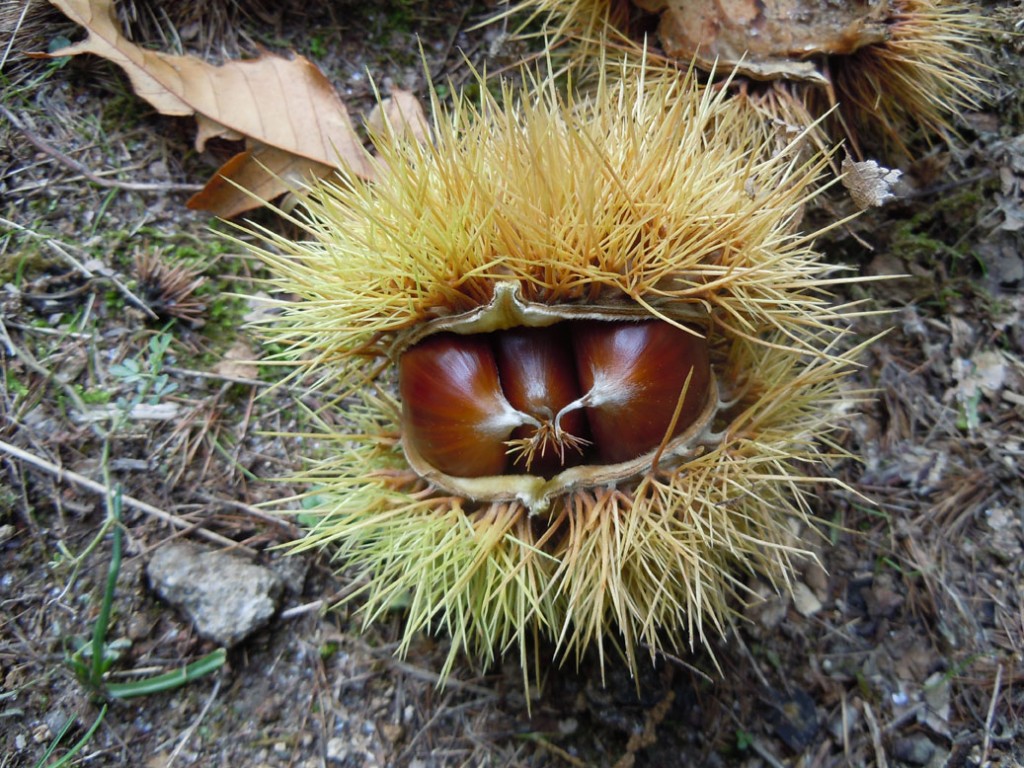 As for the best time to visit, I have to say March-June if you love the sun and autumn if you don’t. The former because it’s just before the tourists hit and the latter because autumn is when the Maremma holds its best and most authentic food festivals and is when you can go olive and grape picking, taste the new season’s wines and olive oils and try your luck at mushroom hunting and chestnut gathering.

The area is so large – if someone has one week, where should they stay? Is it possible to get a taste of the whole by residing in any one part? 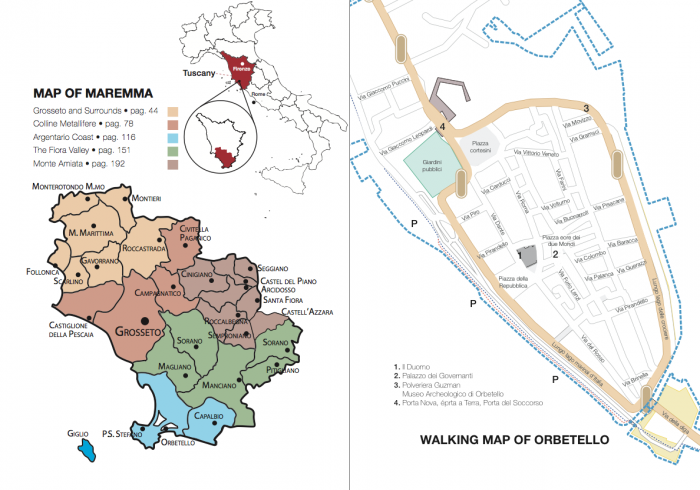 Oh, goodness, choosing just one area is like asking a mother to choose which kid she likes the best. I get a lot of emails from tourists who want to see it all. I always tell them to start with the Fiora Valley and areas around Saturnia. I’m biased because I live here, but that’s where our most breathtaking sights are. You’re also relatively close to Grosseto and the Argentario Coast, so in some respects you can get a taste of most of the Maremma from its beaches to its cities, its nature parks to its museums. Then if you’re inspired, you can visit the Colline Metallifere and Monte Amiata on another trip. If you have one week, definitely visit the Saturnia hot springs, Montemerano, Pitigliano and Sovana. They will blow your socks off!

Old: I have to say the penis tree in Massa Marittima. It doesn’t get any more obscure. It’s a medieval painting that once adorned the public washrooms. The hanging phallic fruit were thought to encourage fertility in the women who visited, and it’s the miracle it wasn’t destroyed in the puritan eras that followed. 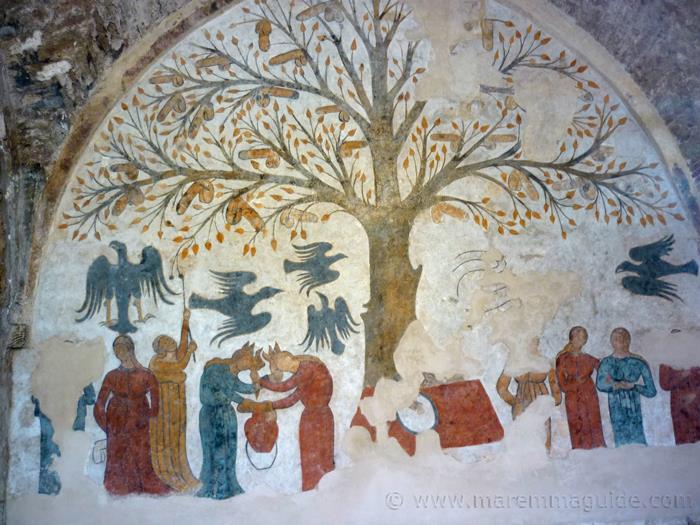 Photo of the “penis tree” by Donna Stiles from www.maremmaguide.com

New: my modern thing has to be Niki Saint de Phalle’s art garden in Capalbio [Editor’s note: we have similar taste, it’s my favourite place in the world, in part because my first real date with my husband was there – read the story]. You won’t find anything more whimsical or heart warming in Tuscany. 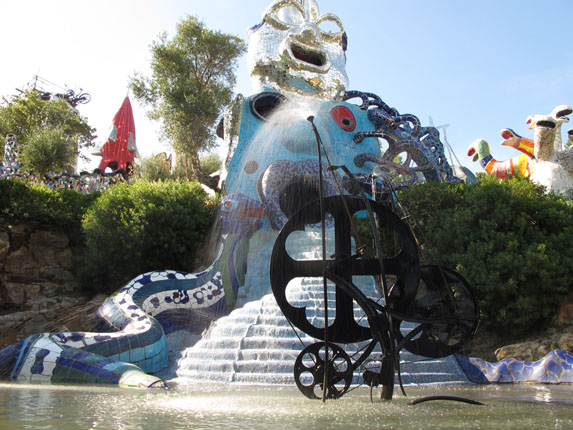 Booze: I am in love with Antinori’s winery Le Mortelle in Castiglione della Pescaia. I have no idea what their wine is like. I just think the winery is an architectural masterpiece. As for wines to try and buy, it has to be Fattoria La Maliosa in Saturnia. They make amazing biodynamic wines. 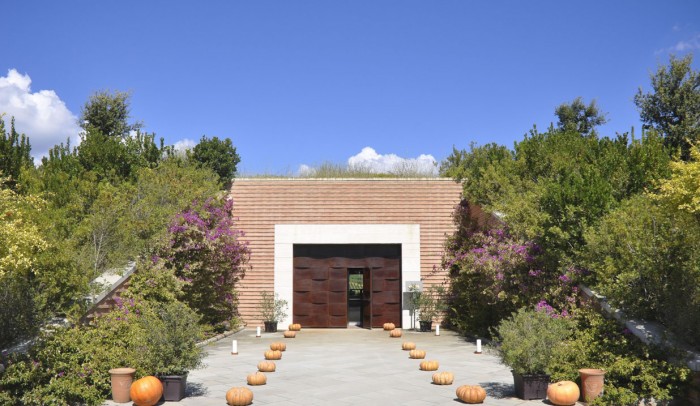 Right! Ready for a trip to Maremma? I’ve got a copy of the book and am going to explore some of these new places. BUY THE BOOK!