If you’ve ever watched a movie mostly for the costumes, Sofia Copola’s 2006 film “Marie Antoinette” might have been it. For this movie about personal feelings, excess and adolescent beauty, the costumes were designed by Milena Canonero and won an Oscar (the designer’s third). These historically accurate costumes made for the big-budget film are currently on display at Prato’s Museo del Tessuto. The drool-worthy temporary exhibition is an opportunity to get a still and up close look at the part you liked most about the film (admit it!) and also – very exceptionally – to compare these to some real 18th-century pieces available in another section of the same museum. 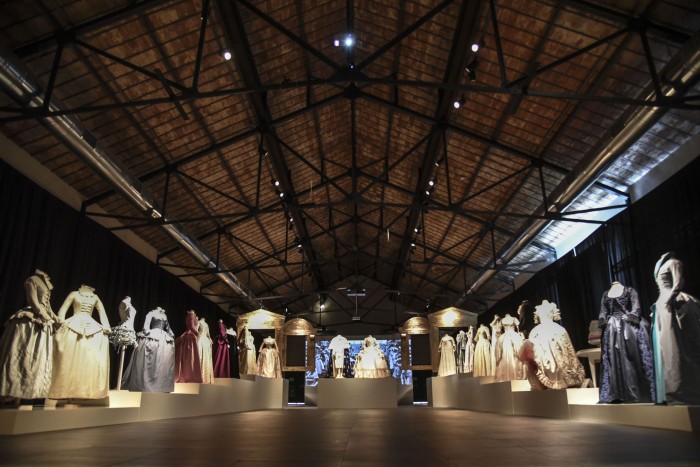 The film and its costumes

The 2006 film directed by Sofia Coppola is based on the 1932 biography of Marie Antoinette by Stefan Zweig. Very much of its age, the book portrays an ordinary woman (albeit born an Austrian princess who would mary a French King) who is flawed and emotional. The film thus follows the emotional history of the protagonist, and the costumes mirror this. 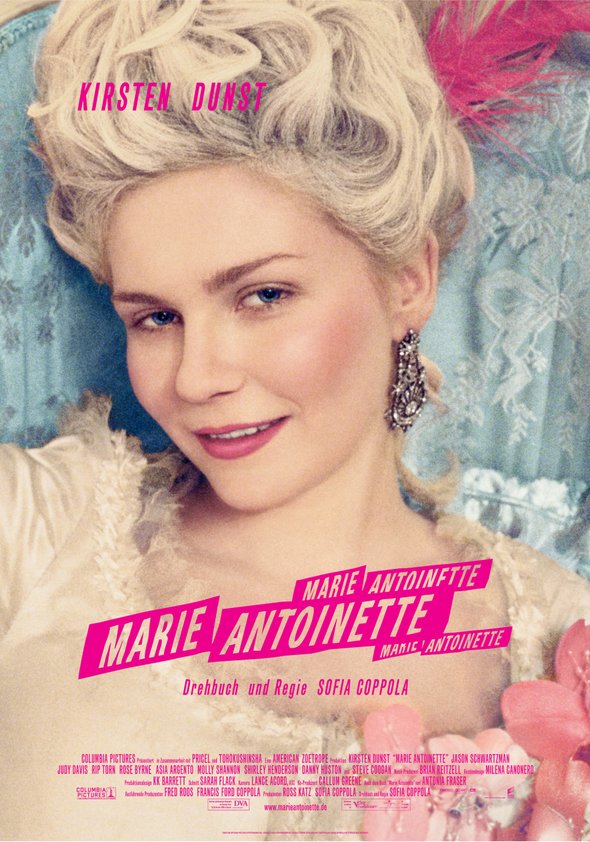 The movie poster (in German)

In the film, we trace the life of MA, from her adolescent freshness as a debutante through to her life as an underappreciated queen, subject of much gossip. We see her adopt a life of excess at Versailles to make up for her young husband’s inadequacies in bed, or so the story goes. Balls and games characterized by pastel decor and luscious sweets create the image of a bored, rich adolescent. As the movie progresses, we see the queen’s character and costume change.

The costumes designed by Canonero were created by Rome based Sartoria The One, a young film costume house that holds a large archive of items from both national and international films. Alessandra Cinti, owner of Sartoria The One, said that numerous meetings were held with the designer before starting to work on the outfits.

“Research into materials was long, complex and precise, especially with regard to the finishings and the use of lace, embroidery and appliqués, some or which were actually historical. Once applied to the costumes, these elements added to the preciousness of the textiles, for example in the coronation dress, one of the most beautiful and most complex of the whole production.”

The group made some 170 costumes, of which more than 100 just for Kirsten Dunst, and there’s no question that this is a film about the clothing.

30 of these 100 dresses for the protagonist of the film are on display at Prato’s Museo del Tessuto. The exhibition opens with a section dedicated to MA with multimedia that helps describe the steps in her life and relate these to the historical period as well as to the queen’s great passion for fashion. 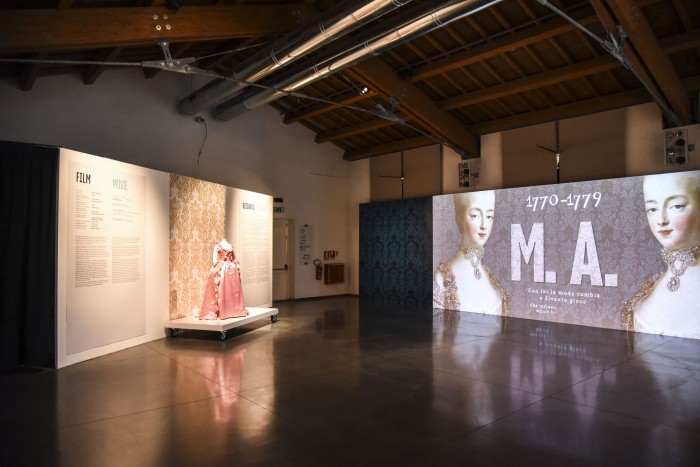 MA’s public image was created by France’s greatest dressmakers and artisans, with sumptuous dresses, refined accessories, extravagant wigs and precious jewels that defined her style and was imitated at Versailles and throughout European courts. 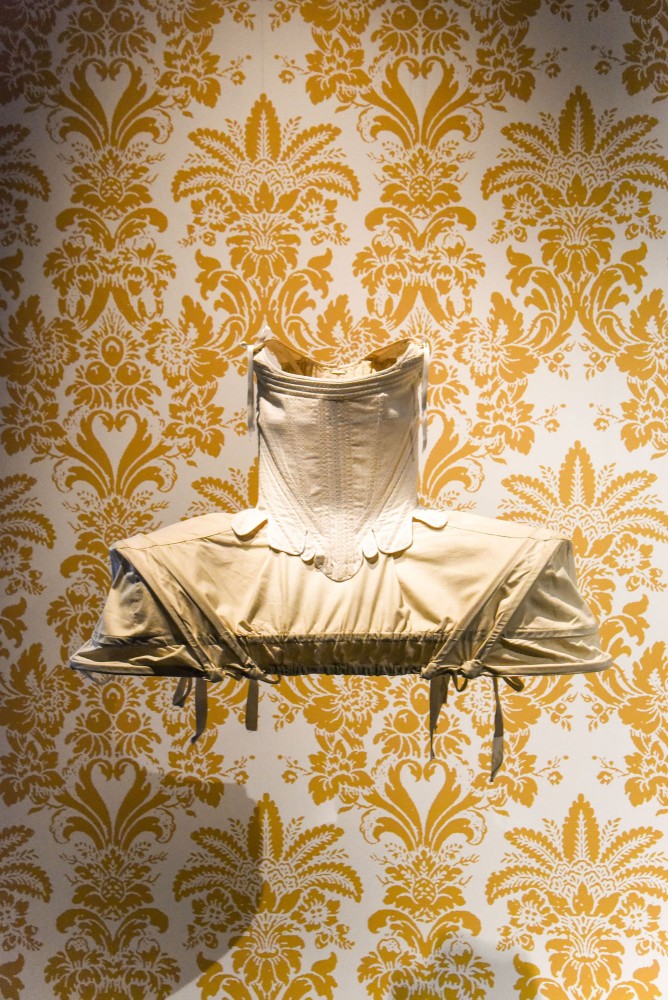 We get a sense of what it might have been like to wear these clothes thanks to the separate display of the corsets and hoops that show how complex the understructure of these clothes were, and allow us to imagine, through their stark display, how rigid and uncomfortable these would have been. 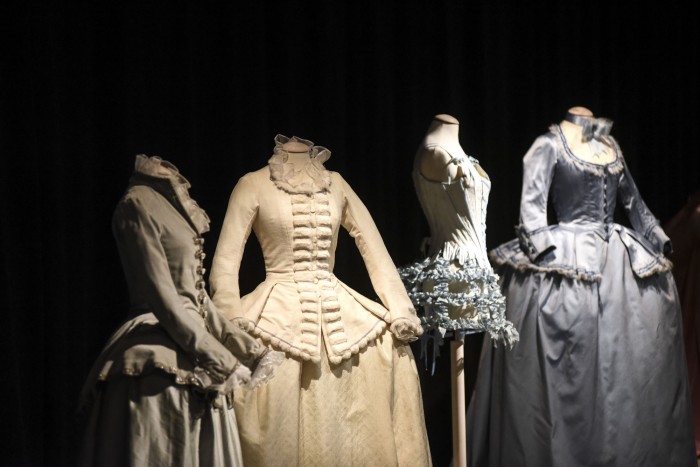 After the initial historical introduction, we proceed to a large room with more than twenty of the costumes for the film, mostly those worn by Dunst, through also some male costumes, all lent by the archive of Sartoria The One. Film and exhibition come together with the outfits worn by the film characters for the coronation, displayed side by side. 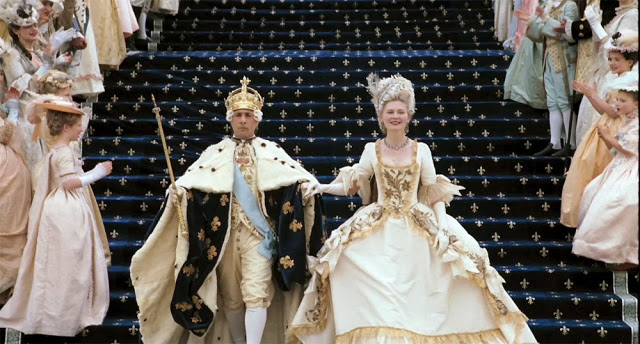 Film still of the coronation 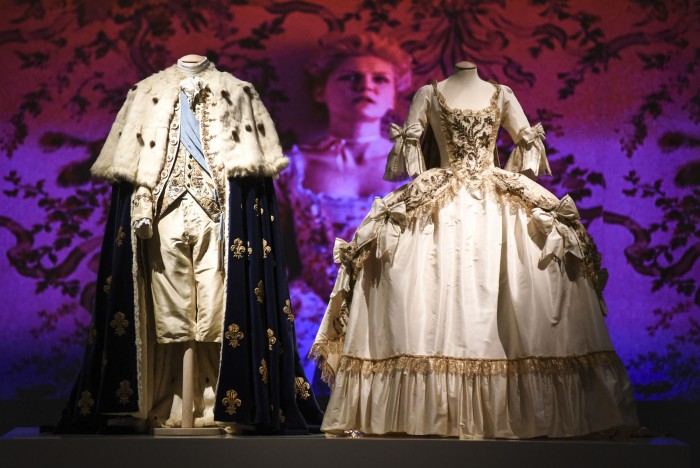 Display of the costumes at Museo del Tessuto

The room is transformed in our imaginations into the grand salons of Versailles, with hanging frames and metaphorical elements referring to the dramatic life of Queen Marie Antoinette. The display is also assisted by film clips projected to further draw parallels between display and cinema. 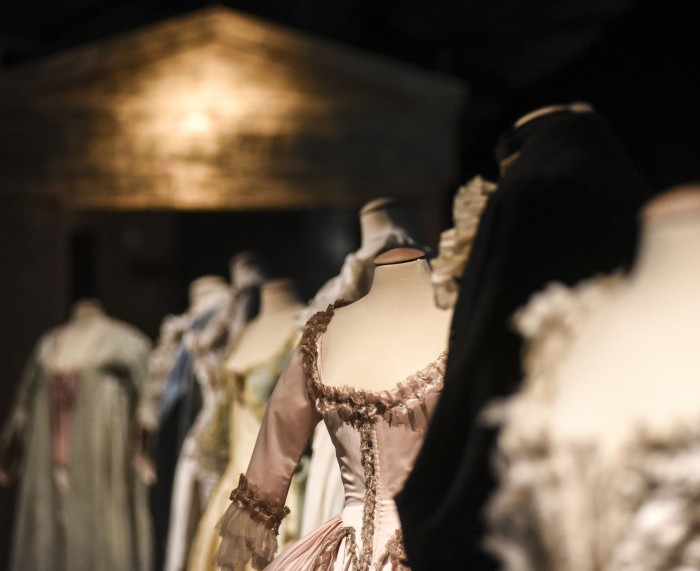 As always with the modern exhibits at this museum, the costumes are set on dark grey pedestals and are not protected by glass cases, making it a particular pleasure to get right up close and look at the details of workmanship and the historic pieces of lace. Also, not to be discounted, it’s nice to be able to take pictures of these dresses! 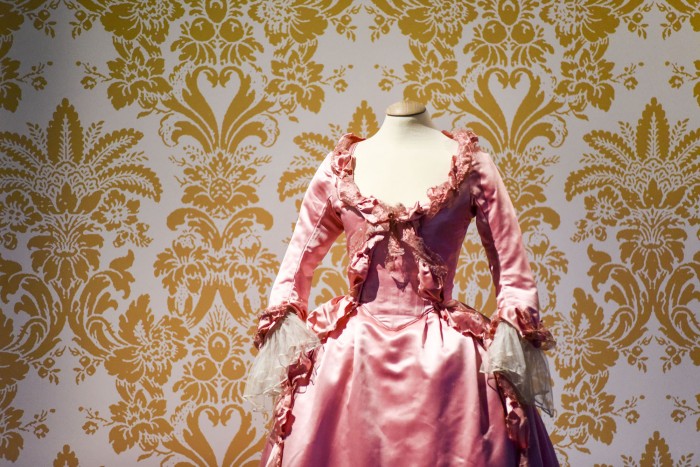 Downstairs in the same museum, there’s a historical display of clothing and accessories from essentially the same period – the 18th century – called “Il Capriccio e La Ragione: Eleganze del Settecento Europeo”. Here, behind glass, you can admire some real dresses in the court style just before the time of Marie Antoinette, as well as some shoes and accessories, and paintings that serve as additional historical evidence of the period’s style. 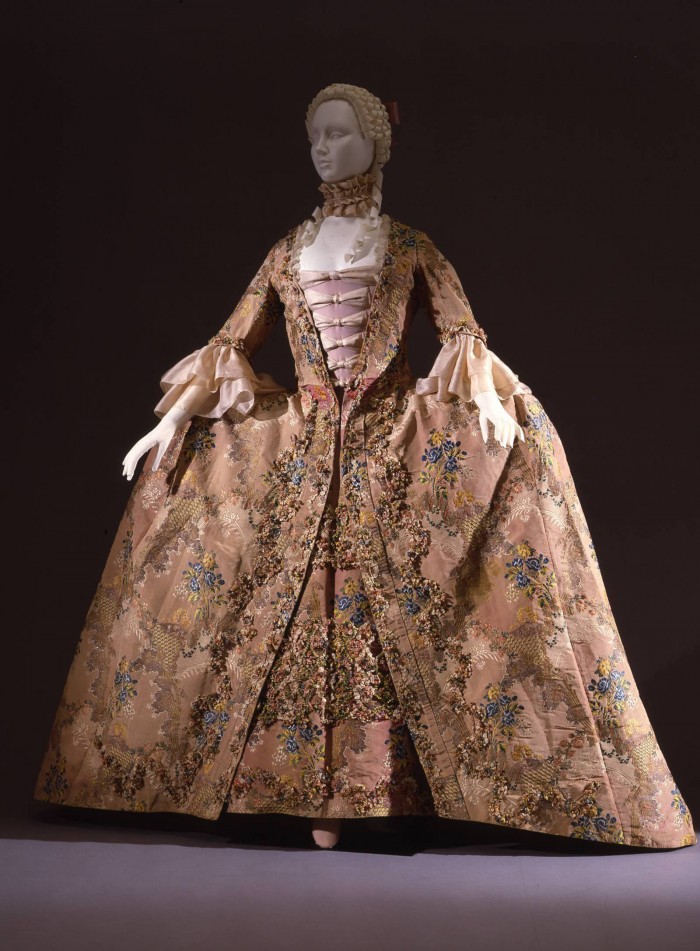 Womens dress from 1765, Italian, on loan from the Uffizi costume gallery

Photos by Marco Badiani – with thanks