Fazio Cacciaconi was a Templar knight in search of a treasure of his order that was buried somewhere in the remote area of the Tuscan Maremma, in the Amiata mountains. Or so legend would have it, and it is for this Fazio that the small town of Rocchette di Fazio was named. Cacciaconti was the son of Ildebrandesca degli Aldobrandeschi, one of the leading families in this area during the Middle Ages, and this is their town, which seems almost frozen in time. This weekend, we invaded it. 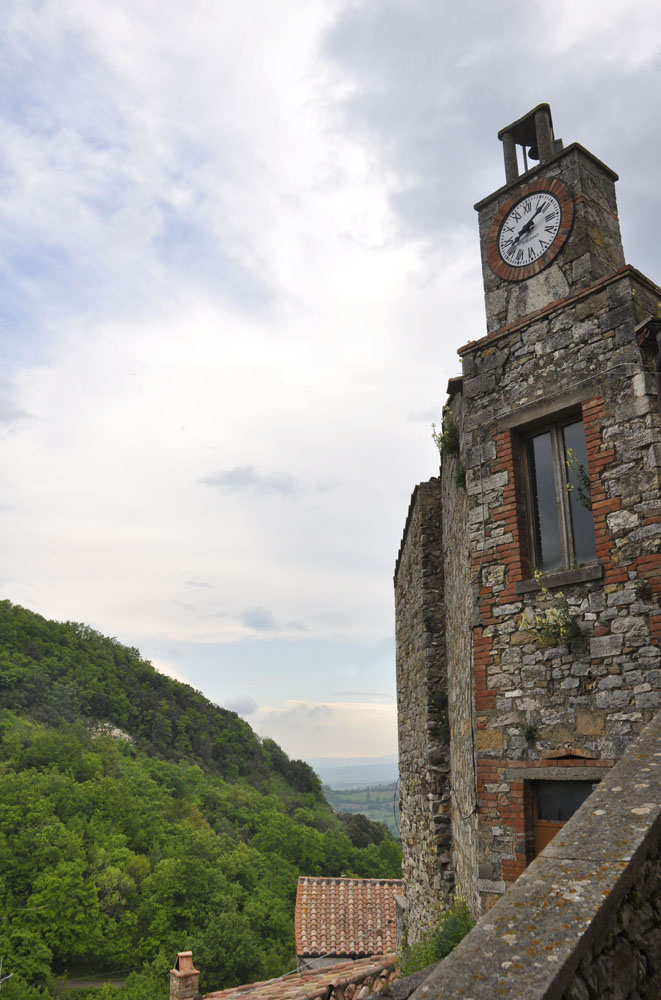 Rocchette di Fazio is, in fact, an early Medieval town, with remants of its Templar past – a Pieve, the remains of a fortified castle, and a hospice outside the walls – as well as of its later inhabitation – a small and charming stone town that has been recently and carefully restored by northern European vacationers. 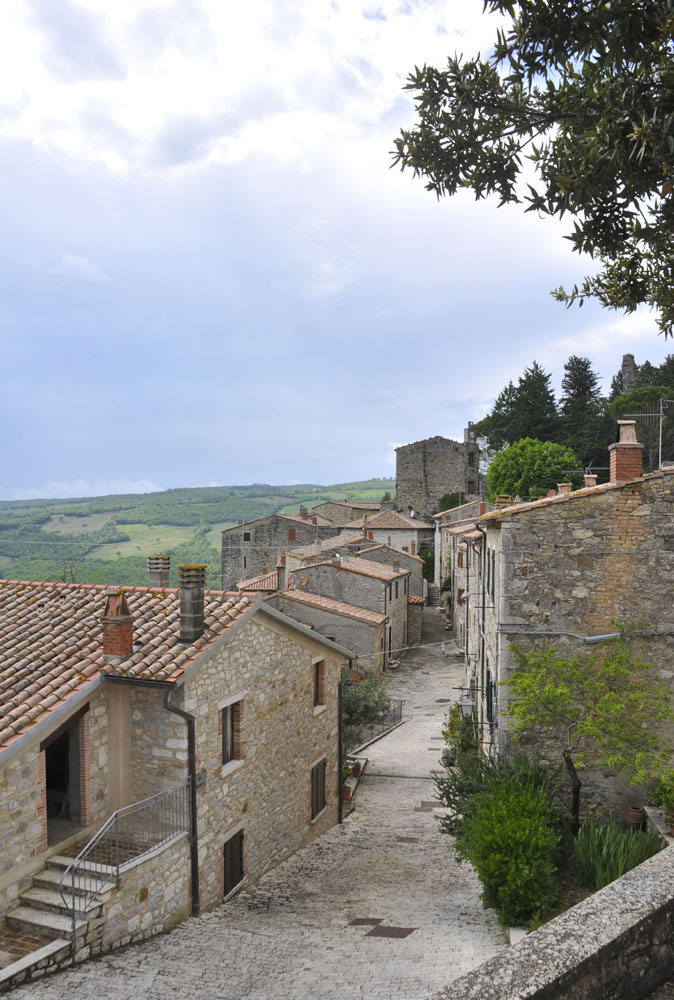 Population 20, served by one restaurant, surrounded by a few agritourisms, and about 3km from the town of Semproniano (not particularly large in itself). It is reached by torturous roads with impressive views. 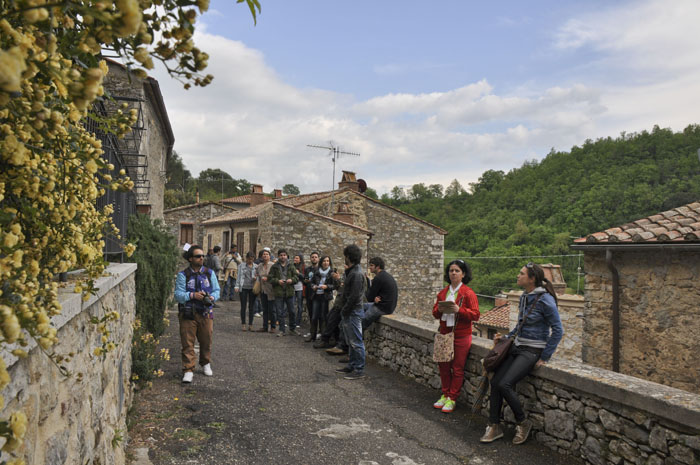 I recently had the opportunity to “invade” this tiny Tuscan town as it’s currently “Invasioni Digitali” or “Digital Invasions” week (April 26 to May 6, 2014 – for more about this movement, see the article I wrote about it last year). The independent group for tourism promotion, Maremmans (in the persons of Rita Marzano, Fabio Iacozzilli and Fabrizio D’Ascenzi), organized a visit to Rochette di Fazio with the help of a very well informed local guide and archaeologist, Elisabetta Santarelli. IgersMaremma was also in on the game, providing a well promoted and well organized day out. The point of the invasion is to help spread knowledge of Italian art and culture through digital means. 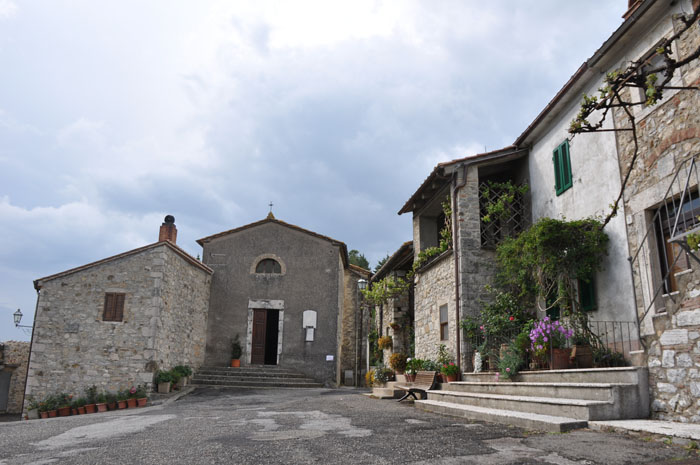 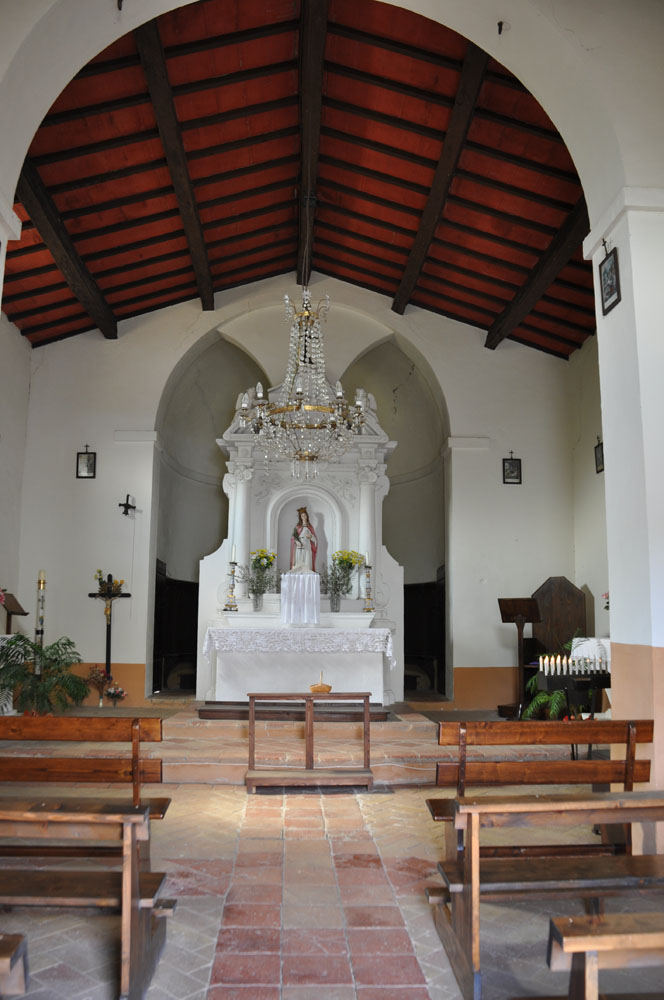 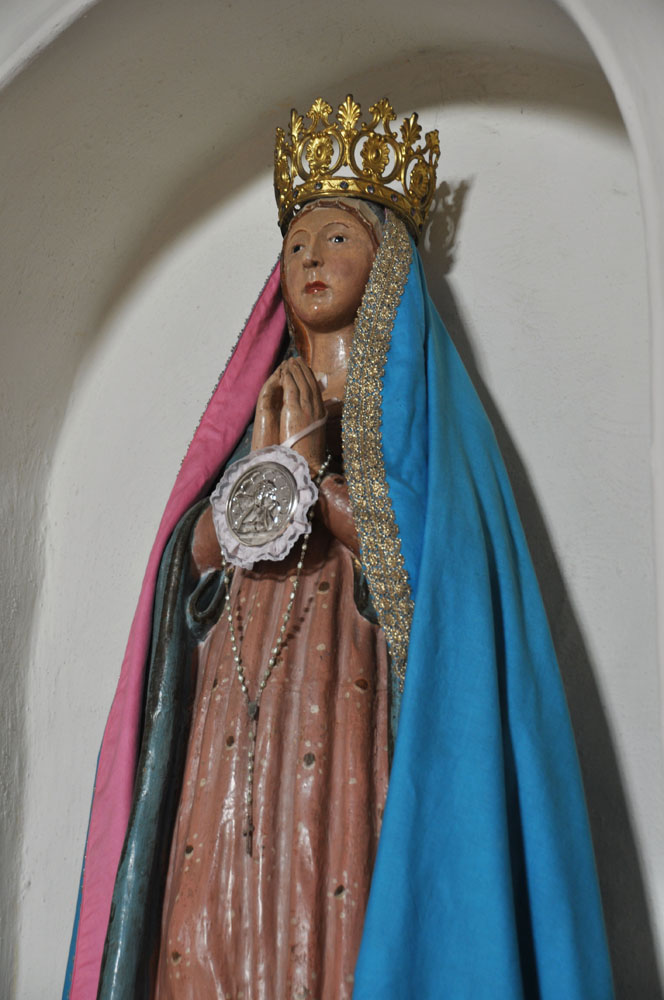 We started our visit to the town in its attractive piazza, on which there is a 16th-century church. It becomes the parish church only in the 19th century since the earlier religious structure in town was further away, and pretty much in ruin. The single nave church is simple, conserving a wooden polychrome sculpture of the Madonna della Consolazione for which the church is named. 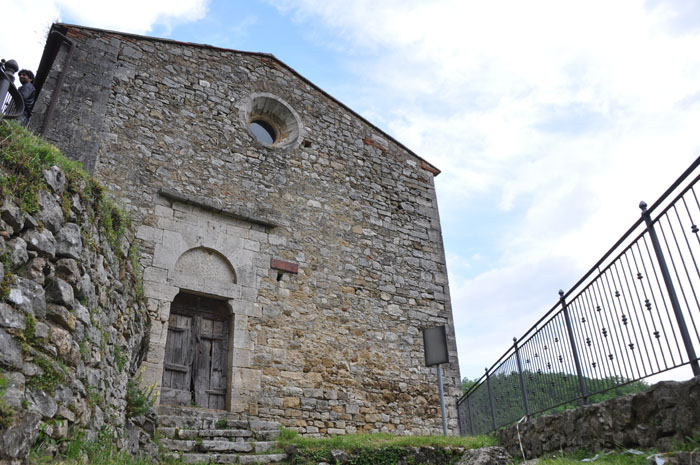 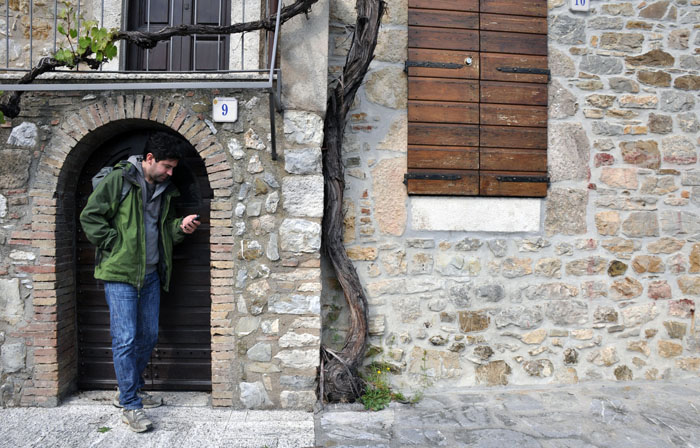 Invader Tommaso is sharing culture with his iphone

The earlier church is accessed by a not entirely paved path. The Pieve di Santa Cristina is from the 13th century, and is boarded up, so we can only admire its architecture. The simple Romanesque church has the door off to one side, over which is the symbol of the Order of the Templars. Legend has it that a Templar knight and his sword are buried in the crypt.

View of the whole valley (click to see a larger version) 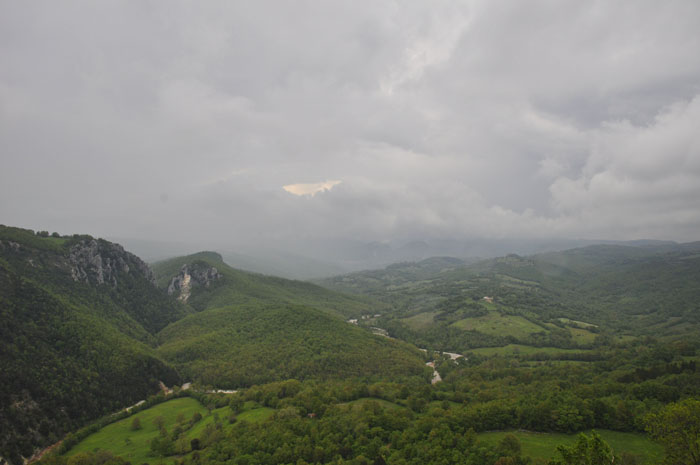 Part of the view

Above the Pieve is the Rocca, what’s left of the fortified castle. The high point of the town and much of the area around it, the view drops off onto an incredibly green valley that is divided by the Albegna river. A WWF reserve (Bosco dei Rocconi) in this valley conserves rare falcons and other wildlife. 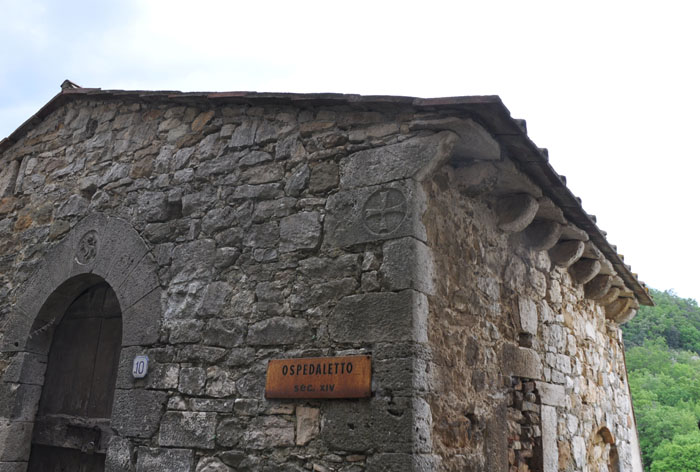 At the opposite side of town, where a door delimits entrance to the city (which however does not have defensive walls, being graced by natural defenses), a “ospedale” sits just outside the door. This is not a hospital but a hospice, a place to welcome pilgrims or travelers who arrived after the city doors were closed (usually at sundown). This 13th century building is simple, yet has a few small sculpted decorations – another Templar cross, an Agnus Dei over the door, and a stylized head that might be of Saint Thomas (to whom the building was dedicated), a monk, or possibly Baphomet, a kind of idol that the Templars were accused of worshipping. An inscription reads: “M Ch Tep Spo” which is interpreted as Militia Christi Templi Sancto Sepulcro. 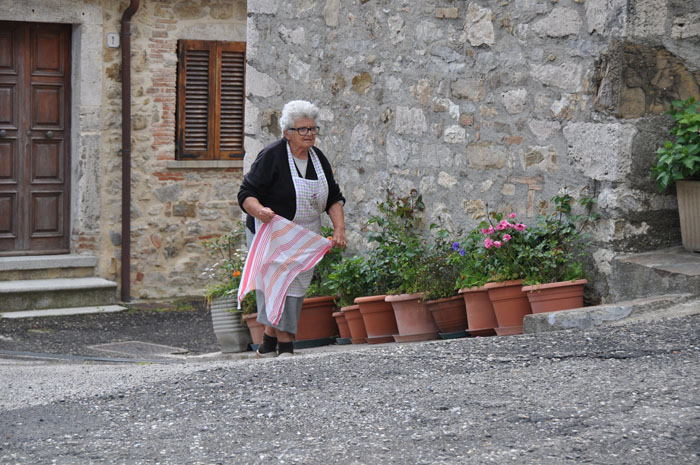 Rochette di Fazio is just one of many adorable small towns to visit in Maremma, and there are some very interesting properties for sale here, I noticed. For me, this southern area (about 20km from the Lazio border) is still mostly to be explored. It will never be overrun with tourists due to the condition of the roads to reach it. 100% worth the voyage. 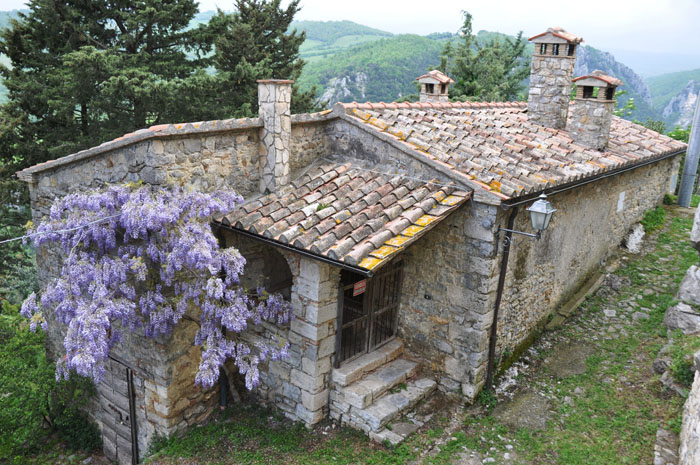 This house is for sale. 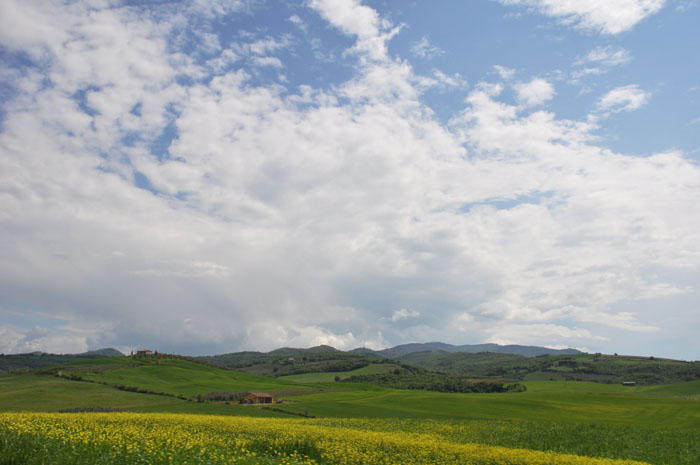 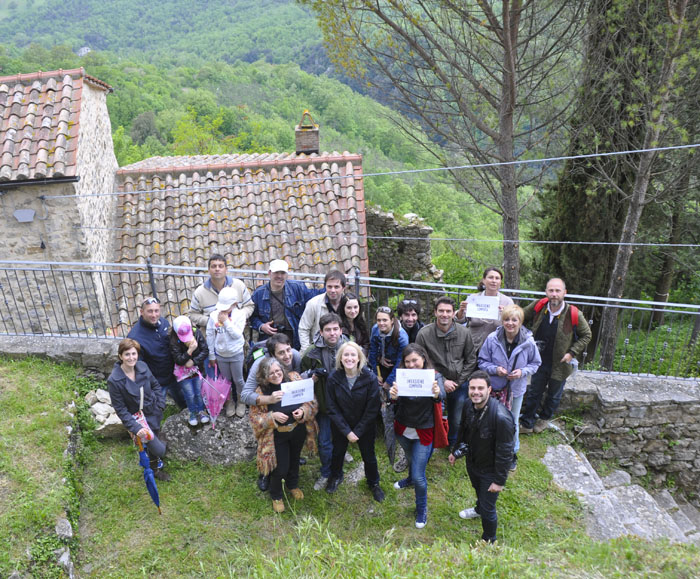