A medieval pilgrim, passing through Siena on the via Francigena, would likely have had a bowl of soup and slept at Santa Maria della Scala. This building across from the Duomo of Siena is now a museum, but a series of displays remind us of its original function. At a time when Europe is finding ways to address a “migrant crisis”, a renewed communication of the history of Santa Maria della Scala speaks of how, in the past, this place offered hospitality and nurture to strangers, thanks to the generosity of a city and its inhabitants. 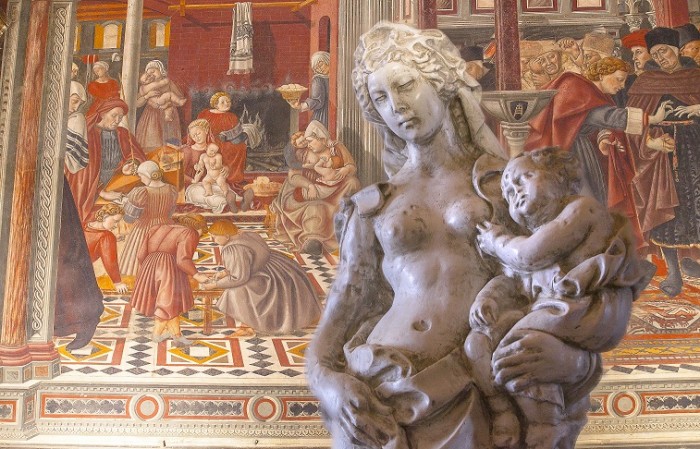 The Latin word hospes, meaning to host a guest or stranger, evolved into the modern English word hospice, but the word hospital also has the same root. In Italy, a lot of historical buildings that we now call Ospedale – like the Ospedale degli Innocenti in Florence – were not hospitals in the modern sense of the word, but hospices created for a different kind of assistance. At the Innocenti, they “offered hospitality” to orphans and abandoned children. Santa Maria della Scala not only welcomed pilgrims but assisted many other types of people in need. 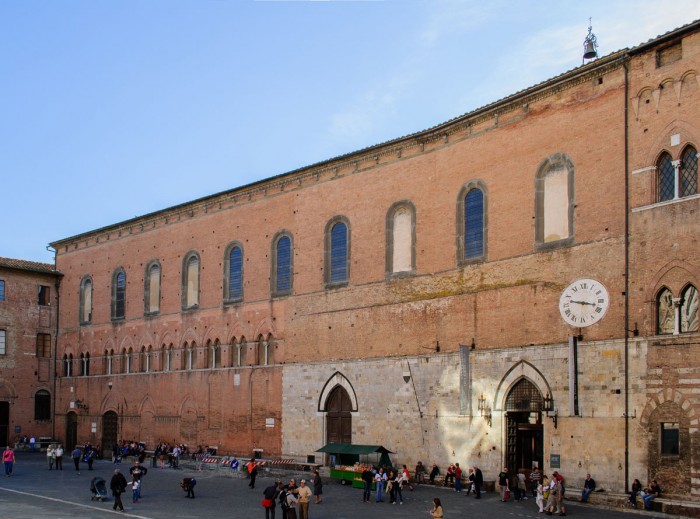 The Early Modern Italian city had numerous charitable associations in place that were basically their social services. I’ve already written about the Buonomini Confraternity in Florence which offered a number of charitable services to the “new poor” of the 15th century, one of many confraternities (voluntary associations of laymen) that arose from the 14th through the 16th centuries in the city. This assistance was understood as a Christian duty: San Bernardo saw charity as a necessary redistribution of riches to make up for the world’s injustice. The god-fearing actors in these charities followed Matthew 25:35: “I was hungry and you gave me food to eat. I was thirsty and you gave me a drink. I was a stranger and you welcomed me.” The physical connection to Siena’s Duomo is not coincidental – its 10th-century canons were the first to welcome pilgrims in the building across the street from theirs (the current cathedral was started centuries later but an earlier version was already located here).

Similar to the Buonomini, the actions of Santa Maria della Scala are painted on the wall, though in the most elaborate fresco cycle you’re ever liable to see outside of a church. The visitor today can go into this large “Pilgrims’ Hall” (Sala dei Pellegrini) and “read” about what charity was carried out in this building. This room has just recently been outfitted with new lighting, updated panels and display. Correlating these explanations are a series of video projections throughout other parts of the vast complex with an actor in the first person voice of a medieval pilgrim, an experiential immersion intended to bring the contemporary public closer to this experience. In the center of the room is a copy of the Acca Larentia sculpture by Jacopo della Quercia (1414-18) from the famous Fonte Gaia fountain in the city’s Campo (you can visit the original in another part of this building). The sculpture represents the adoptive mother of Romulus and Remus, and her bared breast and kind gaze evoke the concept of nurture represented in the nearby frescoes.

View of the room and its new panels

A series of lunettes in the great pilgrims’ hall very closely describe the early social services provided in this place as they are outlined in a statute of 1318. The frescoes are for the most part by Domenico di Bartolo from 1440-1444, with some lunettes by other artists, while the blue ceiling with medallions of old testament figures is part of an earlier project by Marsiglio di Giovanni. Although not a household name, Domenico di Bartolo, who died in 1447, is considered the main Sienese exponent of the early Renaissance, and his highly descriptive style is less Gothic than some of his contemporaries, more closely approximating the courtly style preferred by Florentines in the middle of the century. 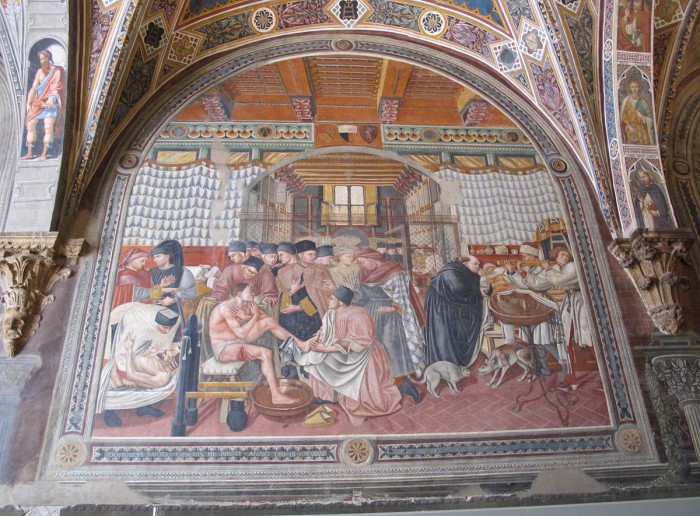 The care of the sick | Photo wikipedia creative commons

The cycle tells some salient moments of the history of the institution, but more interestingly it illustrates its actions, like a visual version of the statue and a reminder to all those who enter – including to those who volunteered here. The “Care of the sick” is a detailed rendering of hospital life at the time. Bustling and full of people, some sick, and apparently a lot of lords discussing what is going on. A youth with a bleeding leg is being washed before surgery, while to the right, another (dying?) patient is being confessed by a monk, and another still is being carried in on a stretcher. 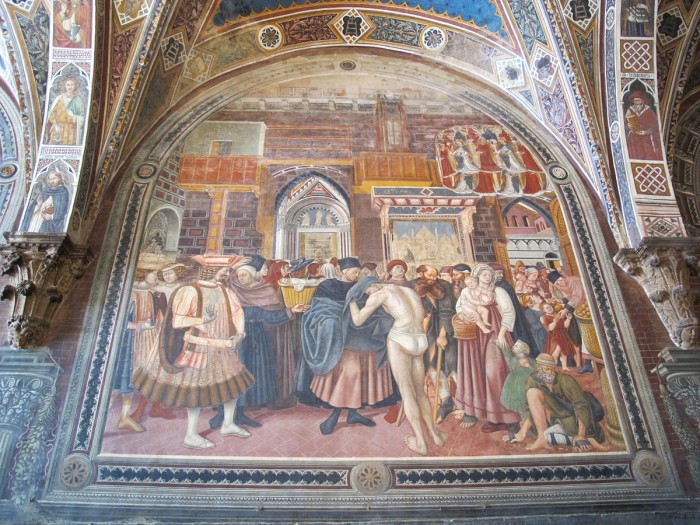 In the “distribution of charity”, the fresco shows the distribution of goods – clothing and bread – to those in need. A man receives a cloak at center, while at the right, a big basket of bread is being given to children and poor mothers. On the left, the hospital’s rector welcomes an important visitor (maybe a donor?). 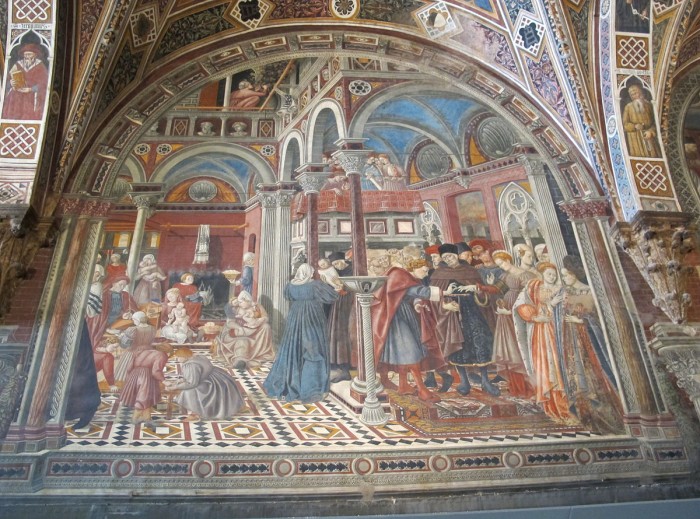 I really love the lunette that shows the hospitality and education of abandoned children because of my own long-term interest in infant abandonment at the Ospedale degli Innocenti. Another part of the Sienese hospice’s funding went towards taking in unwanted babies and making sure that they received natural milk from wetnurses. The young charges were to be raised properly and, if female, married off at the age of 13 with a small dowry. The fresco shows them being nursed and schooled on the left, while on the right, a successful (and rich) marriage is performed.

Interestingly, the primary function of this building, that of hosting pilgrims, isn’t dedicated its own lunette, unless you count the rather damaged image of the “dinner of the poor”, which shows a Renaissance soup kitchen (no photo available).

While unquestionably slightly idealized as any visual representation tends to be, the fresco cycle is a close representation of the ideals of this society.

The ArtSmart roundtable is a monthly feature by a group of arts bloggers around the world who post on an agreed upon arts-related topic each month. We challenged ourselves this time to interpret the word “Concept / Conceptual” which willingly left things open to interpretation. Take a look at what my colleagues have come up with!