Giorgio Vasari called the Siena Duomo floor “the most beautiful, big and magnificent that has ever been done.” Normally this floor is covered by carpets to protect it from the footsteps of many visitors, but it is uncovered for a few months each year, allowing us to get a view of the marble intarsia works of art that tell biblical narratives and represent allegories, and took centuries to complete. 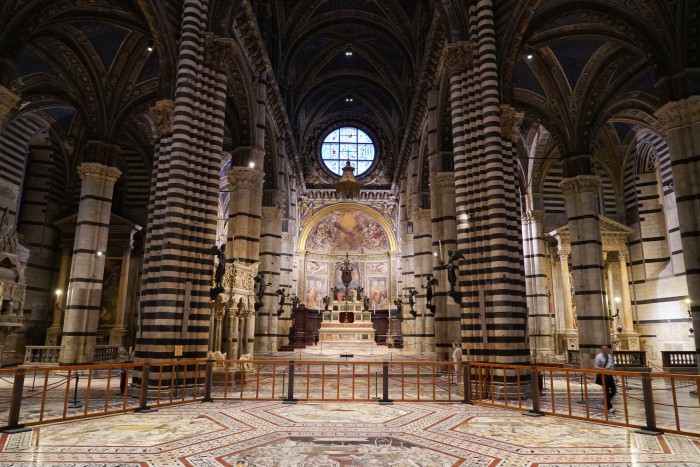 The high altar when the floors are uncovered | Photo Alexandra Korey

In 2013, this visit was made even more exceptional because you will be able to also see the works from above by attending the small group tours called ‘Porta del cielo’, while in 2018 a special light-show has been added to the experience, involving the pavement and facade of the cathedral. 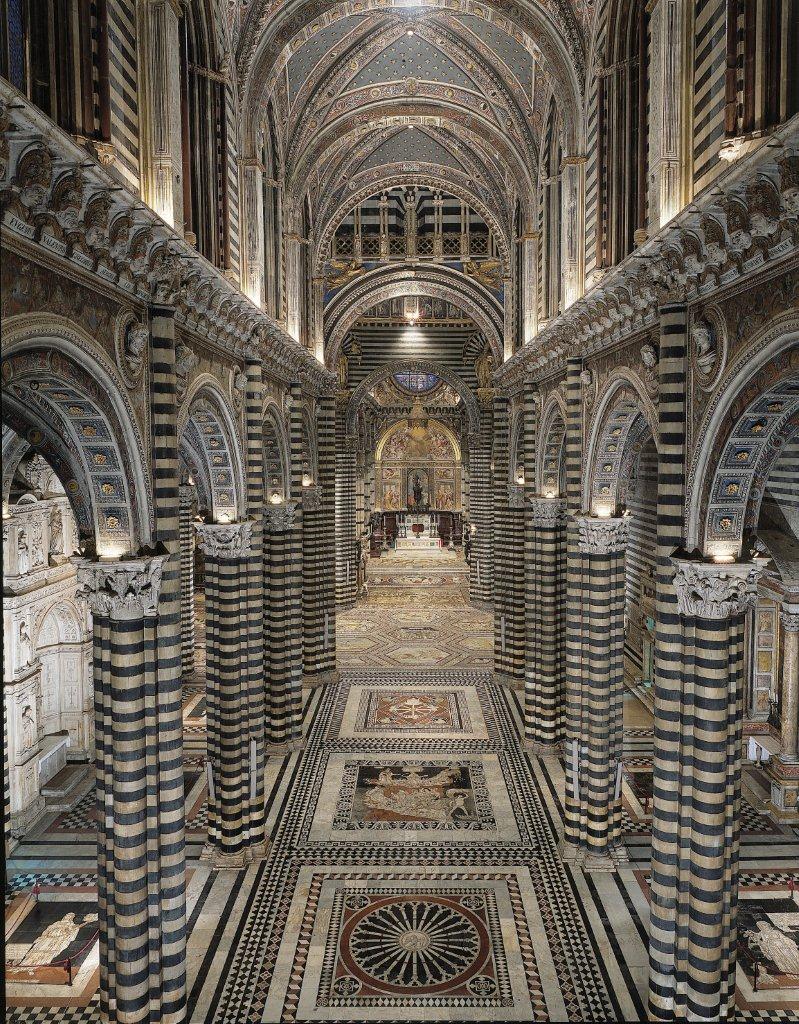 There are 56 large scenes represented on the Siena Duomo floor in marble intarsia designed by major Sienese artists including Sassetta, Domenico di Bartolo, Matteo di Giovanni, and Domenico Beccafumi, as well as with the intervention of the rare ‘foreign’ artist like Pinturicchio. 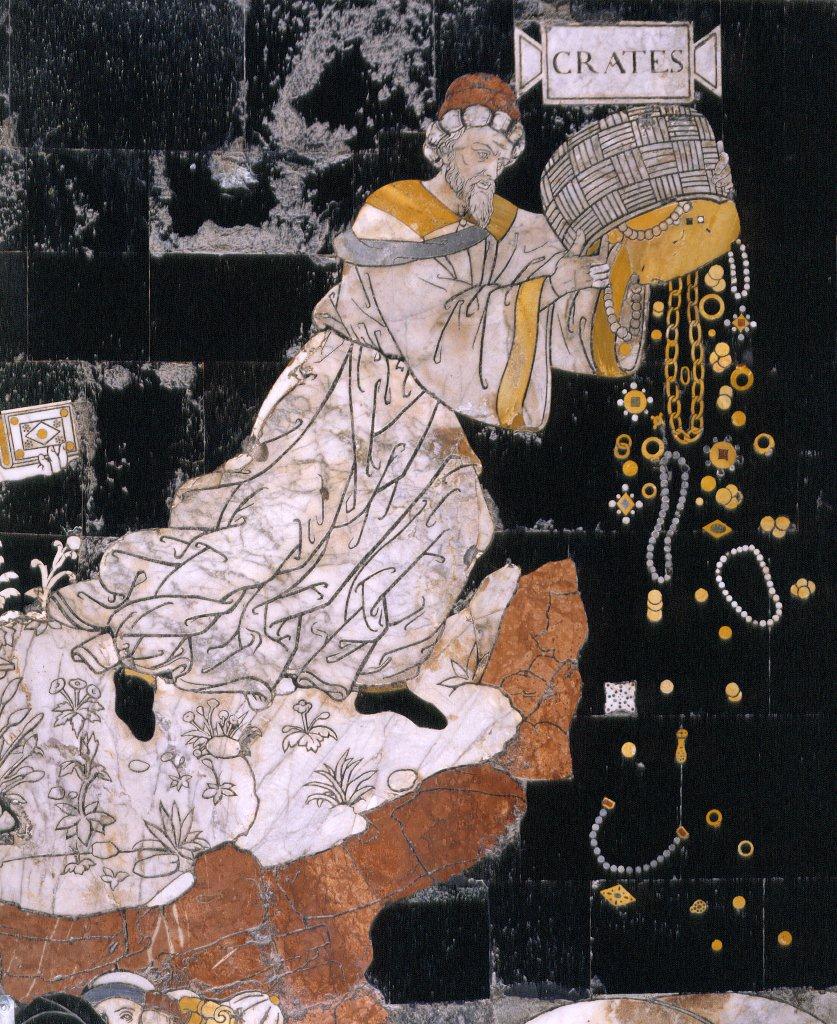 The techniques used progress from graffito to commesso marmoreo. Graffito is the use of the scalpel to carve out areas of white marble which were then filled with black stucco. 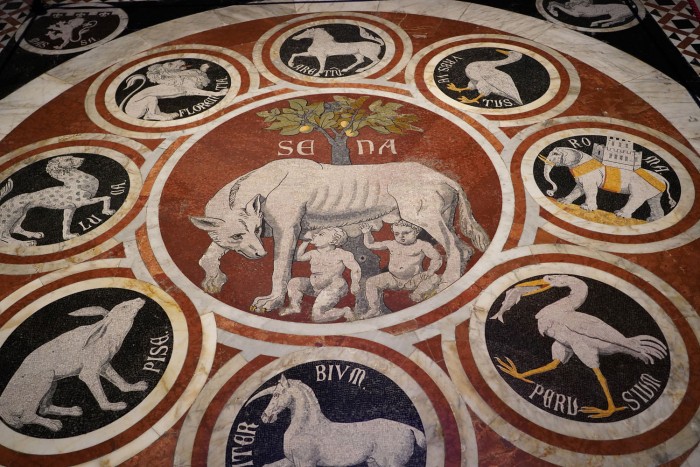 This evolved to incorporating more colours using a technique similar to wood intarsia, which is called commesso marmoreo (sometimes also pietre dure, but these are softer stones, thus not ‘dure’). 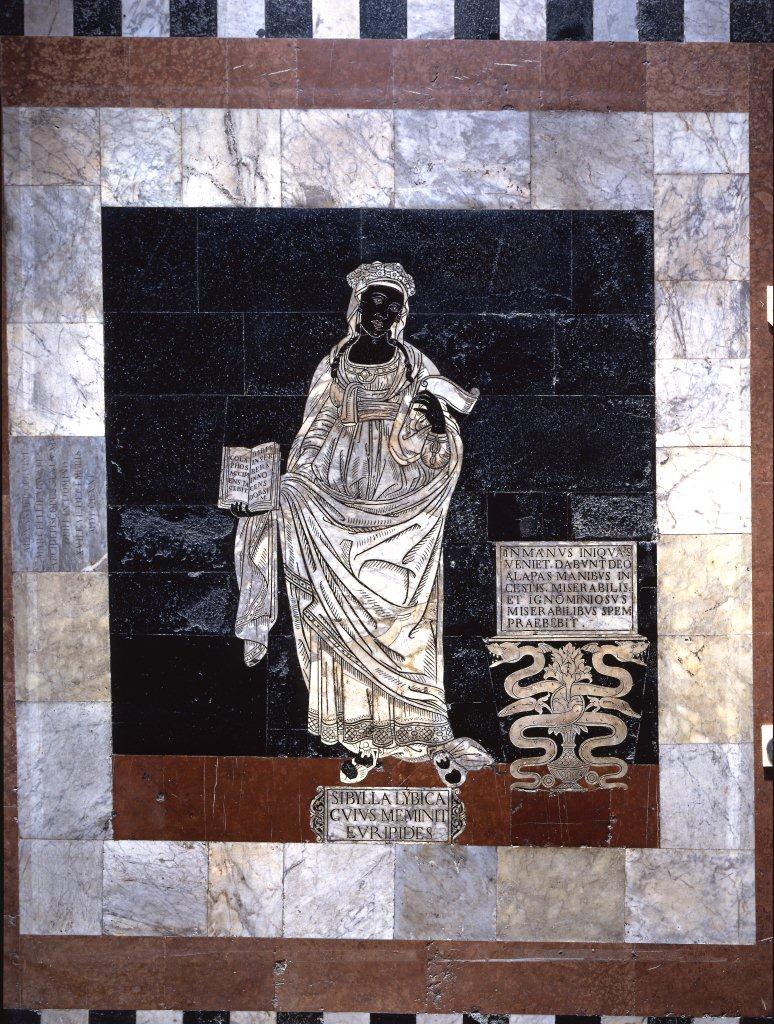 The nave and side aisles of the Cathedral floor are decorated with stories from antiquity, such as the image of Romulus and Remus, symbol of Siena. There are ten sybills represented, and various philosophers. 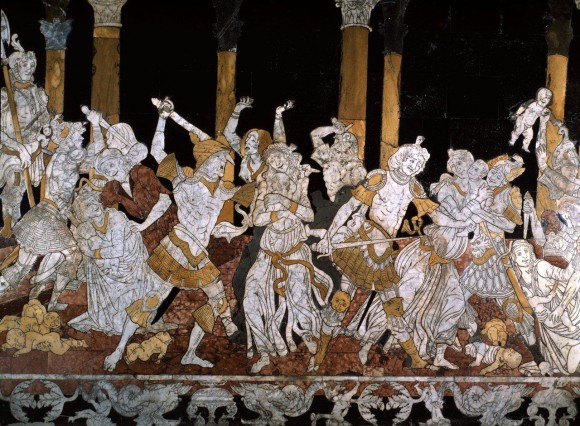 The transept and choir narrate Old Testament stories, all except the Slaughter of the Innocents by Matteo di Giovanni which is based on the recount of the Evangelist St. Matthew.

By the time you get under the cupola, time has gone by and you have works by the Mannerist artist Domenico Beccafumi, with a perfection of the marble intarsia technique to use gradations of material for fine shadows and intricate representation. 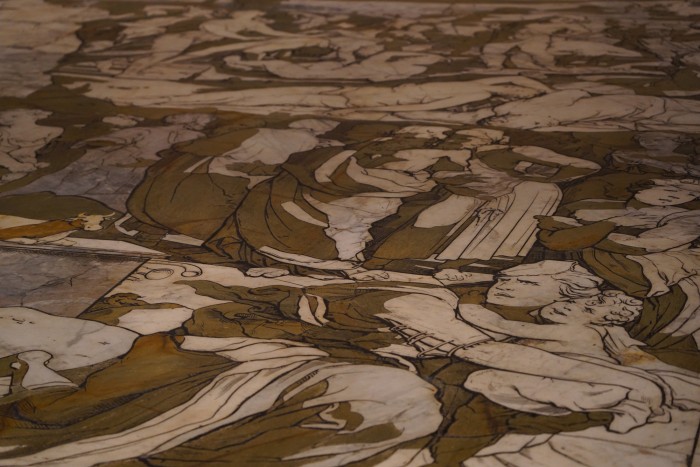 Stylistically you can see how very different these are from the earlier, more static ones. In particular, Beccafumi is brilliant in the way he creates shadow in a way that looks like a two-tone woodblock print. 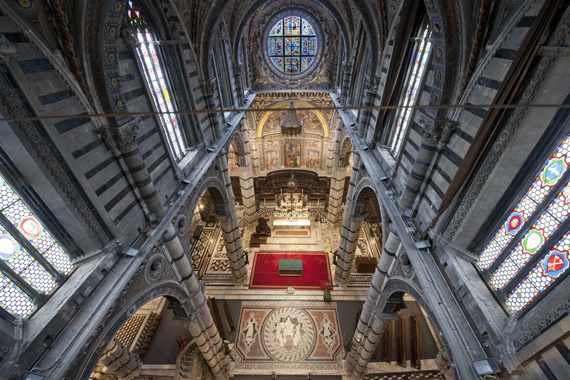 Siena Duomo Floor from above

On June 27, for the seventh edition of Lux in nocte, a light installation called In Lucem Veniet turned the cathedral and its floors into an additionally stunning show. Light, words, music and images assembled as never before on the facade. At the end of the projection, the doors of the Cathedral will open for a special night-time visit. This was a special, free visit that will take place only once, at 21:30 on June 27, 2018. 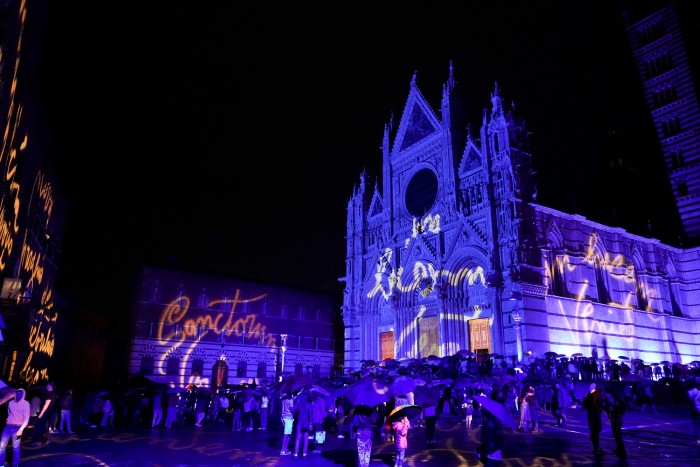 Here is a photo from the exterior light show on June 27 – unfortunately it rained! | Photo Alexandra Korey

PHOTO CREDITS: press photos reproduced by permission from Opera – Civita Group. If you wish to reproduce these images, please write to ufficiostampa@operalaboratori.com