Titian’s Capitoline Baptism of Christ on display in Siena

A Titian in Siena. A dialogue across Italy and its artistic styles. On the occasion of the fifth centenary of Titian’s painting “The Baptism of Christ,” normally at the Pinacoteca Capitolina, an exceptional loan has spurred an opportunity to renew the museum path and services at Siena’s Duomo complex, and for us to take a look at the history of this painting. 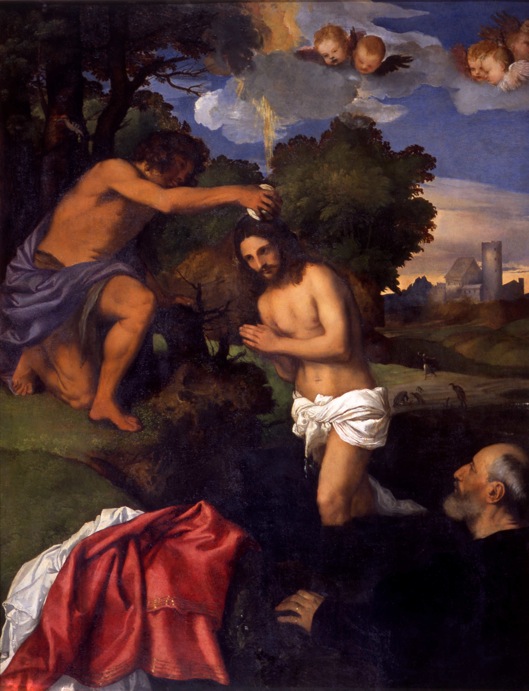 A strong diagonal dominates this vertically-oriented painting, with Christ in the center, standing, receiving the gift of baptism from St. John the Baptist.  A devout, elderly patron with a beard at the bottom right is participating in the event. A typical Titianesque landscape extends in the background; a very blue sky is populated by pairs of cherubim. Seeing the work in person allows one to observe the rich colours and the interesting details such as the figure and animals in the background along the line of the river.

This painting is recalled by Marcantonio Michiel in 1531:

“In the house of M. Zuan Ram in the parish of Santo Stefano: the painting of S. Zuanne (John) who baptizes Christ in the Jordan (river), who is in the river up until his knees, with a nice landscape, and said M. Zuan Ram depicted until his waist, and with his back to the spectator, by the hand of Titian.”

Based on the will of Giovanni Ram in 1511, and with the help of stylistic comparison, the painting has been dated to between 1511 and 1513, so exactly 500 years ago. This makes it a very early work by the great Venetian artist, who had just recently finished the frescoes at the Santo in Padova.

The painting remained in the Venetian family until the end of the sixteenth century; sold to Rome, it is recorded in 1624 amongst the possessions of Cardinal Carlo Emanuele Pio, and then in 1750 ceded to the Musei Capitolini.

A loan to Siena

The city of Siena has taken advantage of this exceptional loan – the first time the painting has been moved from Rome – to create a dialogue between it and permanent works at Siena’s Duomo and in other locations in the city. For the occasion, they have produced multi-lingual and multi-media informational material, a video guide, made available numerous guided tours, and simplified the opening hours of all the structures (something much needed in Italy!).

Art, history and faith are the themes of this dialogue that involve works present in the Duomo complex’s crypt, baptistry, high altar and in the chapel of San Giovanni (in which is conserved a relic of the saint’s arm, inside a beautiful 15th-century reliquary!). Most of these works depict, rightly so, Baptism or Saint John; amongst them are a relief by Ghiberti and fresco by Lorenzo di Pietro.