The marble quarries of Versilia: Cervaiole and the Fondazione Henraux

Caterina Chimenti, a Florentine professional journalist, takes us un a journey to the marble quarries in Versilia owned by the Fondazione Henraux, in particular to Cervaiole, where recently, emerging artists were invited to work directly in the quarries. 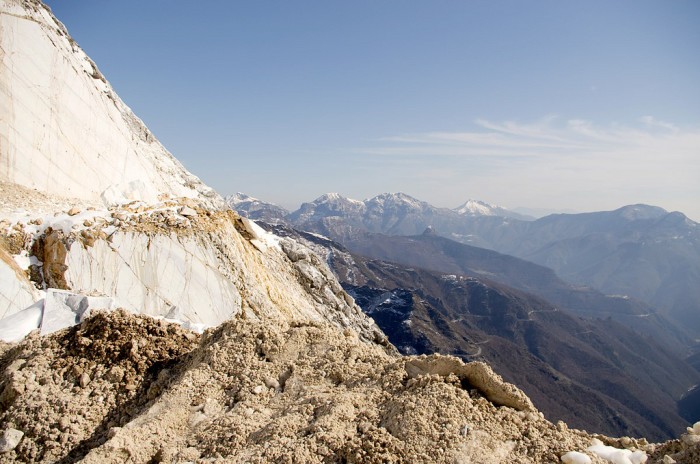 “It’s a passion, not a profession,” I’m told upon arrival at Querceta, at the Henraux offices, while I’m admiring the outline of a grand marble portal in Moresque style, three stories high. In fact, seeing the kind of work lying around here, being professional is not enough. 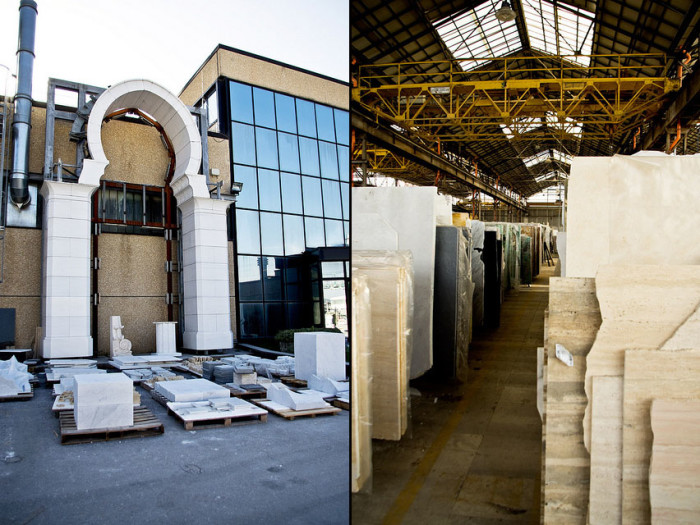 Jean Baptiste Henraux founded this company in 1821, having arrived with Napoleon’s army and with the role of finding marble that was to decorate the Napoleonic Empire. When that Empire failed and plenty of Carrara marble busts of Napoleon had been carved, Jean-Baptiste stayed, turning his old job into a private empire. As he was one of the few to see the potential in the “marble hills” around Carrara, he brought the marble sector into modernity. The name Henraux is one you see all around Versilia – still today, the company has quarrying rights for the entire Monte Altissimo, which jets up from the Versilian coast’s famed beaches. 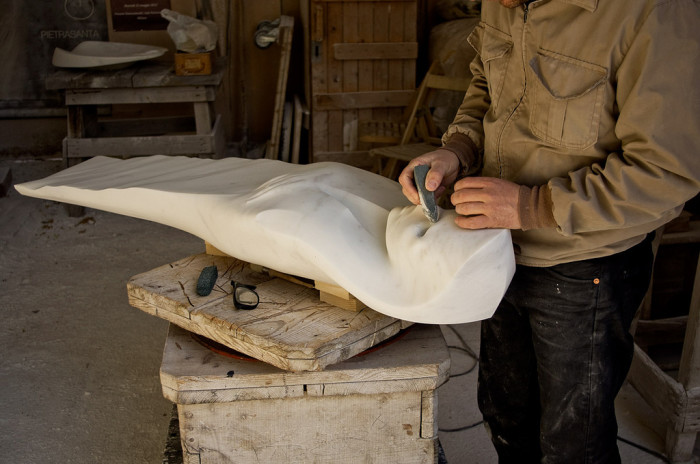 Artist at work on a marble piece

The new Fondazione Henraux was established in 2011 to create a “polo culturale”, a cultural destination dedicated to marble. Since the 1960s, the owners have opened their doors to important modern artists like Giò Pomodoro, Hans Arp and Henry Moore. A museum is planned for this site, and a prize has been created for artists under 40; in 2012, artists were invited to work directly at the Cervaiole quarries, where I am heading today.

To reach Cervaiole, we leave Henraux’s office and head inland towards Seravezza (home of a Medici Palazzo of the same name that contains a popular tradition museum with an ample section about the marble industry); from here we go uphill towards the south side of the mountain, to the Falcovaia peak. While work here continues – it’s one of the few of the original 70 quarries to still be functioning – it is possible to visit on occasion. 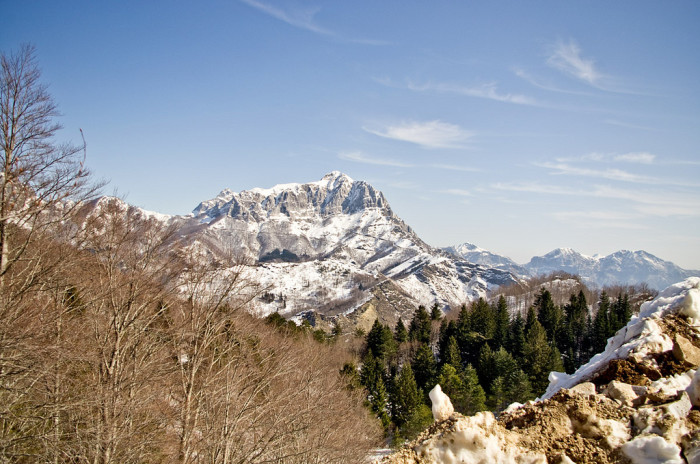 Michelangelo came these ways back in 1518: the Medici had gained Monte Altissimo as their property and they ordered marble to be quarried here for the façade of San Lorenzo in Florence. The façade was never done, of course, and Michelangelo, having spent three difficult years here, left Versilia.

The landscape of this area will be forever marked by the extraction of marble – the green of the mountain is punctuated occasionally by white marble slides, where marble detritus accumulates. The mountain is a difficult landscape to dominate; many men, Michelangelo included, risked their lives here. Michelangelo, in his letters, describes it as “bitter”, though finally “dominated”. To reach Florence from here, blocks of marble had to be brought down to the valley, where they would reach the port soon to be called Forte dei Marmi, and be transported up the Arno to the capital city. 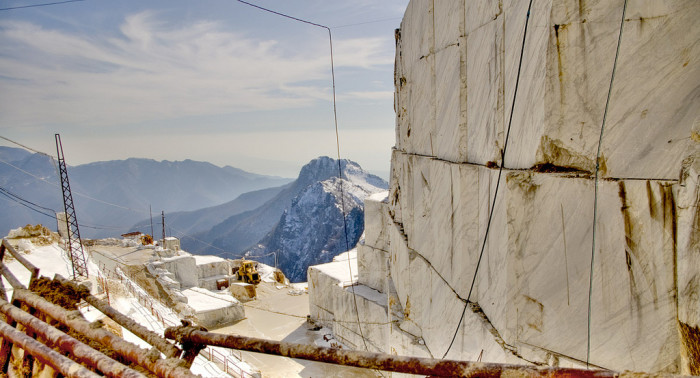 There is something special about Versilia that connects its people to the territory and to this stone. They speak of “cultivation” rather than “extraction” of marble, in a way that highlights the human role in this process. Because marble is, despite modern technology, a story about men, struggle, sacrifice and passion. Even today, the road to reach the quarry is torturous, despite modern asphalt and cars… you can only imagine what it was like a century, or five centuries, ago. Not to mention the weather: in early Spring, when I visited, it was pleasant in the valley, but here at 1300 meters up, there’s 10cm of snow on the ground that refuses to melt. 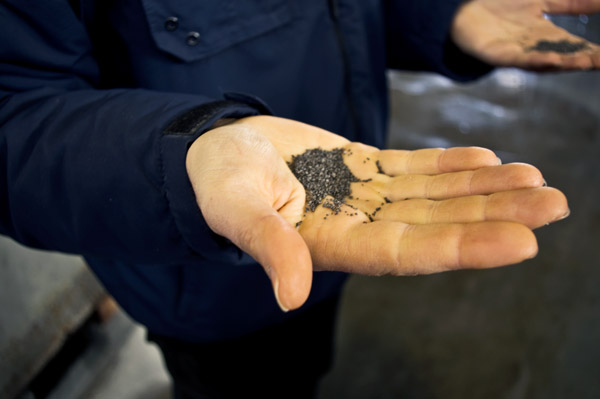 Here, we meet Franco, our guide. He worked in these quarries starting in the 1950s and he know everything about them. He tells us about his job, and how he and his colleagues also slept and ate where they worked. Amongst the famous artists he met while working at Cervaiole, he tells us about Henry Moore, who came right up to choose his marble, and stopped to eat with the miners. On one such occasion, Franco procured a special local ricotta for the artist, made by mountain shepherds and wrapped in beech leaves.

Franco repeats the refrain I had heard at the start of my tour: that this job is about passion. “Michelangelo and Ammannati made masterpieces from this marble, but the first blows… we did that.” Looking around to the high walls of this space nicknamed “La Cattedrale”, there’s no wonder Franco is proud. Despite modern technology and safety regulations, marble mining remains on of the toughest in the world, extracting (or cultivating!) objects of rare beauty from an entirely inhospitable environment. 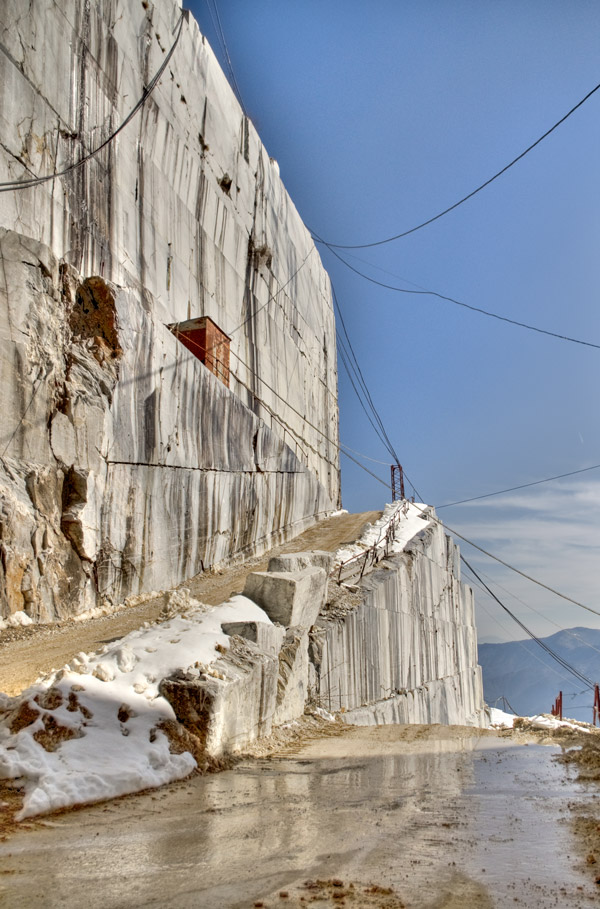 There is plenty of criticism of the cultivation of marble on the part of environmentalists, but no matter what you think, the place commands admiration. The quarries’ almost lunar landscape dot the green mountains, littered with seemingly tiny machines that cut the stone as if it were butter. It reminds us of the force of nature, but also of the force of man to model the land. The quarries of Monte Altissimo are part of a unique landscape, in the Parco delle Apuane, and some of these areas, including some closed quarries, can be reached on foot via hiking trails; passing through this land on foot is another way to physically appreciate the challenge of the mountains and its marble.

The recent opening up of the Fondazione Henraux towards the public not only provides historic and artistic value to the area, it begins a first, tentative dialogue about the requalification of this unique area. The quarries are an economic resource and necessary to an industry that is an important part of Made in Italy, but they’re also an opportunity to tell the story of the Apuane alps and their history in a new way, through its residents and the people who have worked there.

The quarry at Cervaiole can be visited upon request or during special occasions, for more information contact Fondazione Henraux at www.fondazionehenraux.it

For the walking paths of the Apuane Alps, see (in Italian) www.escursioniapuane.it

Photo credits: all photos are by Caterina Chimenti and are licensed Creative Commons.

Caterina has been blogging since 2007 to combine her loves of travel, photography and writing.