Windsurfing in Tuscany (aka, what I learned on my summer holiday)

Summer holidays at the beach here in Italy tend to be quite routine and sedentary. This August I decided things would be different. I would go out and become a professional surfer. Clearly I was born to do this, but where I grew up there were no waves, just cold lakes, and much snow and ice, so I never had the opportunity to prove my mettle. Unfortunately, there is not much surfing in the summertime in this part of Italy, but there is kitesurfing (very trendy and dangerous) and also windsurfing (very 80s, and thus sufficient for us old folk). Inspired by the apparent ease and low price of the latter, I signed up for a beginners’ course. 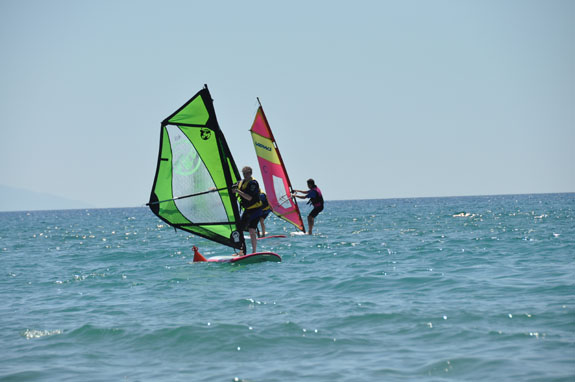 Windsurfing looks really cool and easy when you watch people who are good at it. My only previous experience with the sport, however, was enough to leave me with a lifetime scar… At a scrawny age ten, sent to a rustic Canadian summer camp in which water sports and living in a tent were meant to strengthen character if not muscles, they attempted to teach me to windsurf. They also attempted to inculcate in me a love of sailing, canoeing, kayaking, swimming, and god knows what else, but the only sport I liked was archery, in part because wild strawberries grew in the brush nearby (the mess hall was famous for taco night and Tang instead of water…). On a positive note, I excelled at arts and crafts. Anyway, all I remember about windsurfing is a complete inability to get the sail out of the water. Tug tug tug… And if I was lucky it would come up for a moment, only to tip me backwards and whomp me on the head. 25 years have passed and I have been going to the gym. I am sure I can do better now. Right?

There is a surf school at Riva del Sole, just a ten minute walk down the beach at Castiglione della Pescaia from where we usually park our rear ends. Determined as I was to take up this impressive sport, I sought out a crew of sporty types so we could egg each other on. My husband Tommaso, his brother Gianluca, and my sister in law Laura signed up with me for the six hour beginners’ course. This is usually taught in the morning because the wind always picks up here in the afternoon. However, that slot was taken, leaving us with a 3pm lesson.

My windsurf experience, day by day 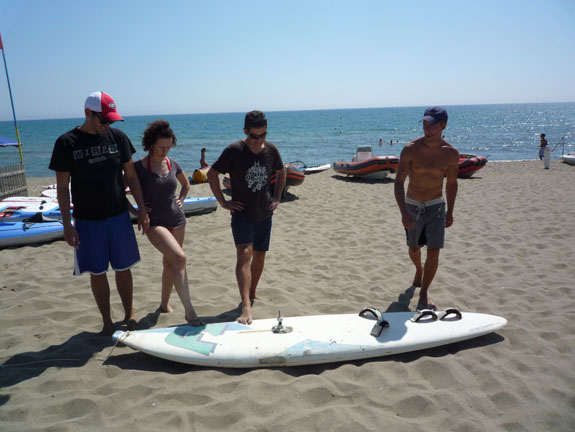 The “quattro ragazzi” are ready to learn using “The Simulator” (from left, Gianluca, Laura, Tommaso, and Gherardo the instructor)

Day 1 of windsurfing dawned, windy and wavy. In a fit of cowardice, I phoned to ask if they really intended to send us out in this weather. Sure, they said. We walked over, being blown strongly in the direction of Lampedusa, and I was pretty worried. We started out with 40 minutes of theory explained by the instructor in the blazing sun of mid afternoon, of which I understood about 20%, not being particularly drawn to theories of fluid dynamics and physics (although they were not put to us in this complex language, but to me it was all Greek. If I don’t DO it, I just don’t get it). 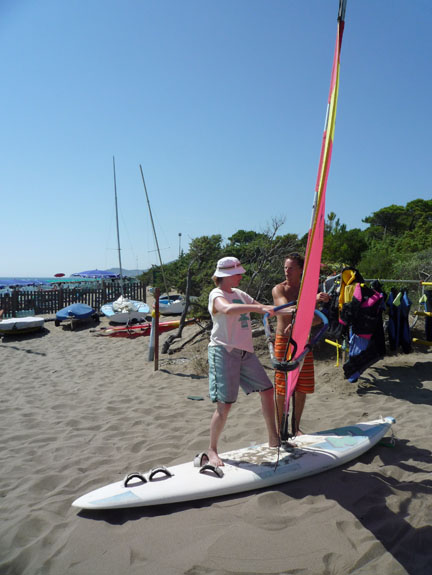 On land it is perfectly easy. Why not in water?

Into the water we went. To my surprise I was able to lift the sail out of the water! Okay, it said “kiddie” on it, but never mind. The second step was to stand in a T position and get the wind to take you in one direction, then execute what is called a “virata” to turn around and come back. I am pleased to say that I did stand up and move in essentially the right direction, but getting back was more challenging, resulting in swimming, which I still dread from my camp days. All in all though, I had no big falls and was not particularly sore after this first experience. We booked for the next lesson.

Day 2, morning. The water was a calm turquoise mirror and there was no wind. Perfect to learn, properly now, how to do the basic moves required of any windsurfer! We, known now as “I quattro ragazzi”, were joined by Silvia, a 20-something roman psychologist who became an important element of our group. I pretty much got it. Windsurfing with no wind or waves is fun!

Day 3, afternoon. It is so cold and windy that we manage to cancel the lesson first thing in the morning, and reschedule for the next day, which proved not much better. The wind was blowing from land out to sea, and in these cases you don’t go out, unless it is at sufficient angle to ensure that you can come back without a helicopter. Lucky us, it was at an appropriate angle, so lesson went ahead as planned. We had Luca, the boss, as our instructor, so by the end of class all of us managed to stand up, go out, turn around and come back, the latter being the most difficult part since waves and current united to make our life just suck. For the better part of an hour, I swam, and cursed. At one point a kayak rescued me. But. exhilarated by success achieved only in the last 3 seconds of class, we signed up for more torture.

Day 4 looked a lot like day 3, only I was given a taller sail. I must be really promising! This one is three meters tall and does not say “kiddie” on it. Tommaso is heading towards the pro category, and towards the island of Elba… Silvia is doing quite well. Laura appears skilled, though all of us girls have a defensive tendency to stay hunched, looking way less cool than we should (with butts sticking out), and resulting in sore backs.

Then, tragedy! Our instructor is stung by a jellyfish, right on his private parts. Jellyfish?! Oh, sheisse! Five were spotted in various zones, and with the drift, waves, and wind, those areas of water were impossible to avoid. Gianluca was the next to succumb, and did not come back out for more surfing. I vowed to stay on the board at all costs so as not to get stung. As a result I took some very impressive wipeouts. Out of complete desperation, I managed to pull off a “strambata“, an advanced move that I shall not attempt to explain but that is the best sounding word in Italian windsurf vocabulary. In the end, Tommaso and I were the only ones not to get stung, he because he is really good at the sport and so stayed on the board, and I out of pure luck. Sore, bruised, and 50% stung, the quattro ragazzi decided to take two days off to recoup and hope the wind changes.

Day 5. Finally the weather decided to cooperate and provide us with pretty ideal wind for our level; unfortunately Laura and Gianluca had to defect as the former had a fever. Today was a kind of turning point for me. I actually never felt frustrated. Luca assigned us a task which we doggedly attempted to execute and I have to say that I did much better. It is all in the position of the body – once you are confident to stand up and lean back, another world opens up! 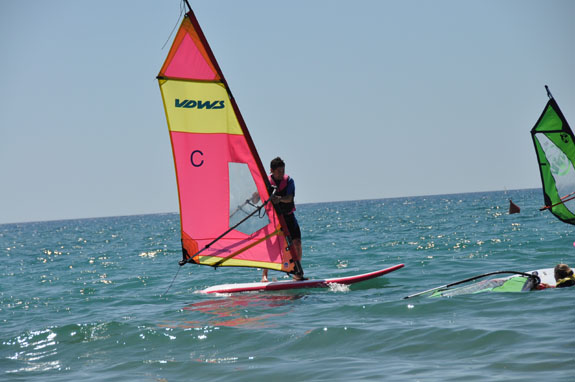 By Day 6 I was using a decent sized sail and not killing myself to hold it up and stay on my feet. I was having so much fun that I booked a seventh lesson, just Silvia and I, and we moved up to an intermediate board that I liked better, and a 4 meter high sail. We were even pretty unphased by the jellyfish, which we would sail over and shout out “don’t fall!” to each other. I still have a long way to go, but I can say that I’ve gotten the basics of windsurfing in a short period of time, and I have good intentions of continuing this sport. 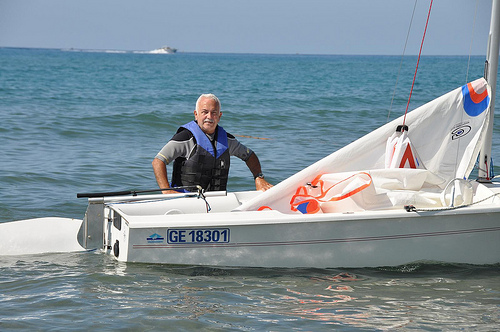 Enzo, my father in law, with his sailboat

The choice of doing an activity of any sort on our holiday, beyond the usual routine of beaching, dipping, and playing beach racquetball, made a decisive change in the whole family’s vacanza. For us “quattro ragazzi”, days revolved around the timing of lessons, and conversation often veered to discussion of winds and practical demonstrations of these theories. But even more interestingly, my father in law, perhaps inspired by our burst of energy, decided to go to the same school for sailing lessons, with the goal of getting his certificate in this.

I learned that starting a challenge like this is best done with loved ones. I learned the hard way that surfboards rub your arms and knees until they turn into a bleeding rash, and that the impact of a body on water can cause bruising. I learned at least ten specialized words in Italian, the vocabulary of windsurfing that will, for me, always be in this language (and so I refused Luca’s offer to tell me the terms in English).

And finally, I learned that what is already pretty great – a family vacation in a place that we all love – can be made even better if we put our minds to it, collaborate, and decide to do something different.

We also got a sage life lesson: “Don’t look at your feet, look out at what’s ahead!” If you think about it, this can be useful advice in a lot of situations.

Where to windsurf in Tuscany

I asked Luca, head of RDS watersports in Castiglione Della Pescaia, to tell me what are the other best places to windsurf in Tuscany. Here are his answers, from south to north along our coast.

Here are the other posts in the roundtable on the topic of “Back to school”: