July 16, 2009-February 8, 2010: The Getty Villa in Malibu CA is host to an exhibition that centers around an important loan from the Museo Archaeologico di Firenze, the famous Chimaera of Arezzo. The Etruscan bronze (4th c BCE) was discovered just outside Arezzo in 1553 and soon became part of the collection of Cosimo I de’Medici, who displayed it first at the Palazzo Vecchio, and then at the Medici villa at Castello. 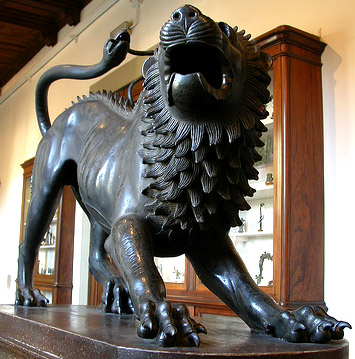 Description of the exhibit from the Getty website: “Inaugurating a partnership with the National Archaeological Museum in Florence, this exhibition traces the myth of Bellerophon and the Chimaera over five centuries of classical art. Featured is a masterpiece of Etruscan sculpture known as the Chimaera of Arezzo: a large-scale bronze of the triple-headed, fire-breathing monster that was slain by the virtuous hero. From its ancient dedication to the supreme Etruscan deity in a sanctuary at Arezzo to its Renaissance display in the Medici collection, the Chimaera has endured as an emblem of the triumph of right over might.” The loan statue will be displayed alongside works from the Getty Collections and other loans from Rome, Naples, Basel, New York, Boston, and Atlanta.

The loan of the Bronze Chimaera is part of a planned, long-term collaboration between the Getty and the Archaeological Museum of Florence announced here, signed by Michael Brand, Sandro Bondi, Stefano De Caro, and Fulvia Lo Schiavo. It is part of Culture Minister Bondi’s interest in promoting locations and works of art that are off the usual tourist radar. In the near future, the two museums plan to collaborate on an exhibit at the Getty villa of other Greek, Roman, and Etruscan bronze sculptures from the Florentine collection; then, at a later date, a show on Etruscans.

WHAT DO YOU THINK? Do you think that the Chimaera and the Archaeological museum of florence are so obscure that they require promotion through a grand tour? Post your opinions here!