6 cool things to do in Barcelona (hipster travel)

The hipster dons his sneakers of a brand so hip we haven’t heard of it yet, and with apparent ease finds the coolest things to do in any city. This is where hipster and I don’t coincide: I wear Asics because they’re comfortable, and I make a major effort to find cool things. Often, hipsters have been there before, or are still there now. Both the hipster and I enjoy mixing art (in or outside of designated “museums”) with food and other experiences. It’s the principle upon which ArtTrav is founded. 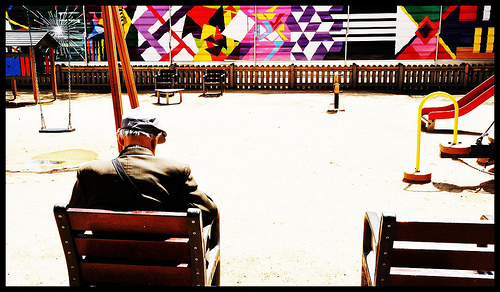 A park in Raval

When planning what to see in Barcelona, I made a list of some of the essential museums and monuments, but excluded many others because I wanted to find some things that were off the beaten track. I consulted a friend who did her “Erasmus” studies here and she suggested some hidden Roman ruins and a nice area for dinner. I was loaned the le Cool Weird and Wonderful Guide to Barcelona

from my boss, Marco, who is a hipster himself, and although from 2006, it’s so advanced it proved helpful now. We cross-checked references in Time Out Barcelona 2011

and with current reviews on TripAdvisor. This led us to some excellent food as well as to funky things to do. Here’s our favourite six list.

Raval used to be gritty and dangerous, or so I understand. People have been bitching about its gentrification thanks to the presence of the new Contemporary art museum (MACBA) and the influx of a few luxury hotels, but it seems to me that this progress means you can safely wander around there (in the daytime) with a big camera and not get robbed. So here’s my hipster tip: go find the coolest street art and photograph it (big zoom lens always good). 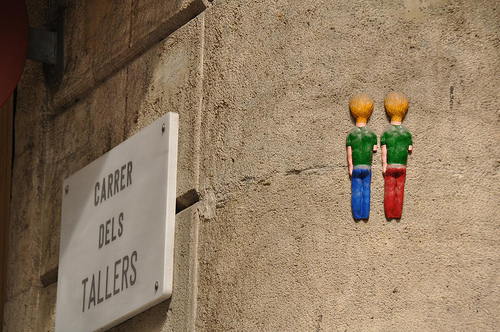 I saw a few works by an artist who is sticking little painted gesso figurines of men on walls and doors. I’m not sure who the artist is (if you know please comment below!), but I like it. Barcelona street artists seem pretty respectful; I get the impression that this is because of a strong enforcement campaign a few years ago (recounted in this post that declares BCN street art dead), but what’s left IMO is the GOOD street art, the graffiti art that is not tagging and just “urban decay”, and it’s done on the metal grated doors that pull down over closed stores, and sometimes on doors, but never on walls. These decorations often are in line with what the store sells – perhaps upon commission of the store owners who figure they’ll get painted anyway? One very nice example of respectful street art is a big intervention of tape art that I’ve photographed for you! Perhaps street art was more alive 5 years ago, but compared to what we have in Florence, even this watered down version is truly superior. 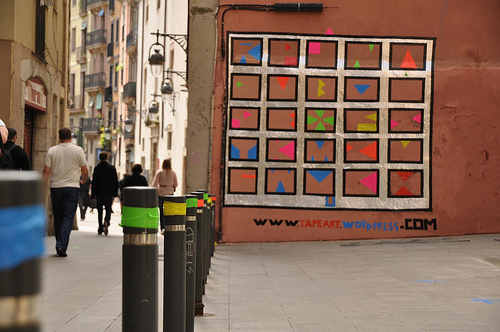 Eat a big salad or a quiche in the cloister of a monatery turned seriously alternative bar/café while reading a childrens’ book in Catalan about “diverse families”. Take a short nap on the couches afterwards. Recommended in the Time Out Guide yet frequented mainly by locals, including groups of young parents who take advantage of the kiddie play area. Catch a concert or performance at night, or run into a community center fair on the weekend. You’re just steps away from the Picasso Museum, yet mentally worlds away. Location: Plaça de l’Acadèmia, area Born. 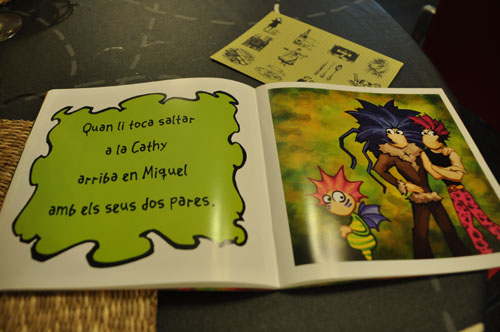 What to say: they’re cheaper than in Italy! Campers are cool shoes, they last a long time and they don’t change style too often.

Designed in 2002 by husband and wife team Enric Miralles & Benedetta Tagliabue (although none of the signs or books give HER credit!) this is probably Barcelona’s most recently built park and it incorporates sustainable design and architecture features. Visiting this area is interesting as it’s an example of planned development at the northeast end of the city (see this drawing from wiki architecture). 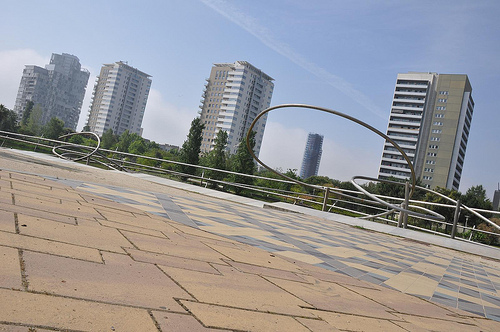 The park is the unifying element in the ex-industrial area that is now home to a few thousand luxury condo dwellers. Say what you will about luxury condos, but I have no issue against them, and would happily live here near this beautiful park that has so many different features. Developed to be like a really big backyard, it has different areas like a duck pond, play area with ping pong tables, and seating areas under the shade of plants that refuse to grow out of gigantic suspended pots decorated with mosaics (one would say Gaudiesque, but I’d hypothesize that it’s possible to be an architect in Barcelona while ignoring this ancestry). Everything is connected by various above- and below-ground irrigation systems, and the lake is fed by rainwater – little lobsters are fed in there, off what I do not know.

Next door, the mall of the same name has some pretty good stores! And if you follow the park to the far end from the subway exit, you hit the beach, populated by locals who insist on lying in the sun even if it’s well hidden behind the fog that seems to rise off the sea.

Hang at the Barcelona Architects’ Association

After a cursory visit to the cathedral just to photograph the geese in the cloister (have you ever seen anything like this before? I haven’t!), go to the architects’ association just across the square. You can’t miss the facade frieze designed by Picasso. Upstairs you may find an interesting temporary exhibition (free) – we saw some really cool models for a semi-utopic housing block. In the basement, the architects’ cooperative bookstore stocks everything from design-geek objects to hardhats and survey tools! Location: Plaça Nova 5, across the street from the Cathedral. 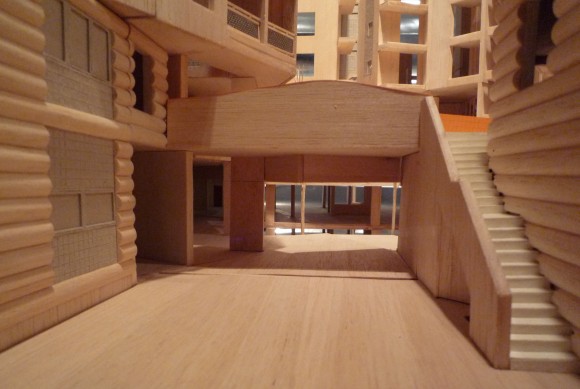 Pick up a souvenir at Vinçon

Vincon is a huge designer home store for anyone design-minded or kitchen-supply loving. Hipster parents will like the assortment of buggies with price-ranges similar to that of my car, and the designer wooden bikes and molded plastic hobby horses intended to raise baby to be as much the consumeristic aesthetes that we are. Foodies will love the assortment of silicon bake ware alongside more traditional pieces.

It’s not just what’s IN this store that’s cool, it’s everything about it – the artistic and engaging window displays, the sheer size of the whole, the logo and package design. It’s been around for many decades, but it’s greatest expansion was in the 1980s, while in 1973 La Sala Vincon opened on the first floor, an important gallery space for emerging Barcelona artists in the fecund swinging 70s – many of the artists involved here now have works hanging at the MACBA. The big gallery space is currently being used to show… outdoor furniture. Sit on it (or, when they change exhibits, sit in the furniture section) and rest up before going back out.

How to get there & where to stay

From Florence to Barcelona the best option is with Vueling!

This ‘hipster’ couple stayed at Eric Vokel Gran via Suites while in Barcelona, and also visited lots of museums.