Visiting Brussels: Belgians Are Not French and 5 other Useful Tips

This is the first post by ArtTrav’s new EU correspondent, Christina Craver. For her bio, see below. 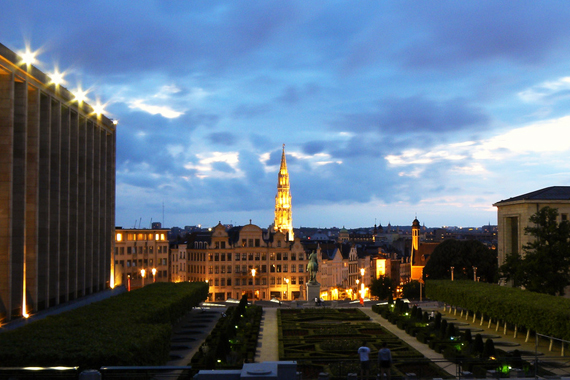 Brussels is a city that suffers from an identity crisis. It is a bilingual capital, speaking both Flemish and French, plopped down in the middle of Flemish territory. Home to many European Union institutions, it is a beacon for people from across Europe, but it also hosts a number of vibrant international communities. This eclectic mix makes Brussels a great city for eating out (Ethiopian, Lebanese and Fish and Chips being some of my favorites), but it can make it difficult to put your finger on what exactly is Belgian.

While enjoying all that Brussels has to offer, here are some unusual, not so touristy cultural experiences you won’t want to miss.

Waffles -or gaufres– will find you, whether or not you are looking for them. While marveling at the Grand Place, hunting for the Mannekin Pis, or stumbling to/from Cafe Delirium you will undoubtedly smell the sweet wafting scent of waffles. I once saw a great photo explaining waffles in Belgium. The thick square ones most non-Belgians simply call “Belgian Waffles” were Brussels Waffles, the round, flatter ones Liege Waffles, and the generic ones covered in a mound of fruit, syrup, ice cream, whipped cream, etc. etc., tourist waffles. In Belgium gaufres are typically eaten with powdered sugar or, at the most, chocolate. But, hey, if you want to be “that guy” and take a photo with your sugar bomb waffle, more power to you. 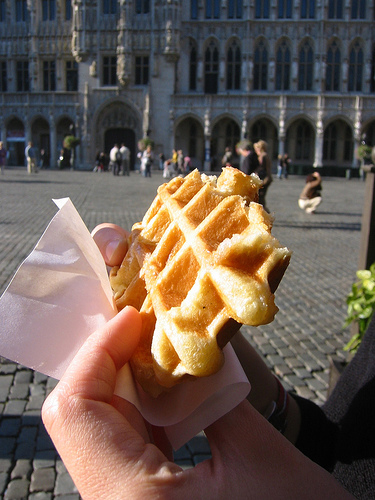 At this point Belgian chocolate has earned itself an international reputation. Throughout Brussels you will find a number of chocolate shops that allow you to mix-and-match by the piece. I recommend trying some for yourself-if not also bringing a selection back as gifts. The one thing I would steer clear of are the well known brands you can get at home. There’s nothing worse than lugging a box of chocolates (read in Forest Gump voice) around the world and seeing the same box sold on discount when you get back.

Shamefully, I must admit that more than a few times I have substituted a proper meal with a “petite paquette” of Belgian frites. These fries are a source of national pride, and also some jabs from their French neighbors (How do you make a Belgian spill his frites? Ask him the time). Aside from eating them at the bar while indulging in Belgian beer (see point 3), frites are best eaten standing, straight from the cone at a friterie with one of the many sauces offered (spicy pili pili being my favorite).

Maybe you’ve seen the MacBook skin with a man with a bowler derby’s face covered by the apple logo. Perhaps you know it is in reference to a famous painting called Son of Man. You may even be up-to-date on the fact that the painting was done by René Magritte, famous Belgian surrealist painter. Regardless of your level of familiarity with the artist, the museum is worth a visit. While it doesn’t hold Son of Man (the painting is in a private collection) it has many of his other paintings, drawings, photographs and writings. 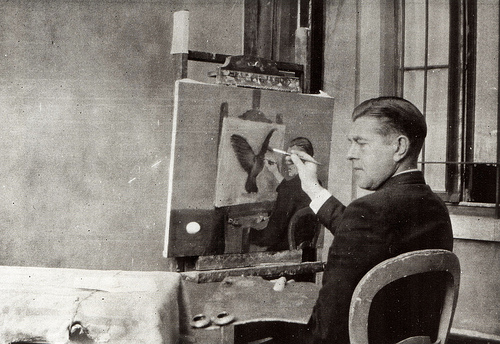 In a country where protests are a national pastime and the “not my problem” attitude reigns king, Magritte is a perfect example of Belgian creativity and obstinacy all rolled into one. Well placed throughout the museum are quotes that help you understand who Magritte was, something that I so often find missing in museums dedicated to a single artist. A particularly interesting rant of his is:

“I detest my own past and that of others. I detest resignation, patience, professional heroism and all those nice obligatory sentiments. I also detest the decorative arts, folklore, publicity, the voice of speakers, aerodynamics, boy scouts, the smell of gasoline, topical matters and drunkards.”

With quotes like these how can you not be curious about the man, the myth, the one and only Magritte?

Beer is to Belgium what wine is to Italy. It is plentiful, relatively cheap, and, most of all, good. Explaining all the kinds of Belgian beers would require writing a book, of which many already exist, so the best advice I can give is to sit down in a cafe or bar and sample what you can. (Warning: if you are a light beer drinker the 6%+alcohol by volume may sneak up on you, especially as the beer masks its content with a slightly sweeter taste and thicker body) 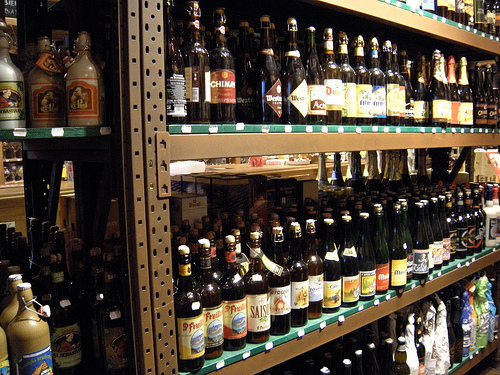 Contrary to the average beer drinker’s intuition, you won’t find many of the Belgian blonde, tripple or trappist beers on tap. But just because they come bottled, doesn’t mean they’re inferior by any means. Those that are on tap are generally served in 25cl or 33cl glasses, not pints or 50cl. No matter the sample size, enjoy yourself and the fact that you can drink not just a “Belgian style ale” but the real deal.

Smurfs aside, of all Belgian comic book characters, Tintin is probably the most well known worldwide. Like another certain striped-shirt, spectacled comic book character, he can be found in some unexpected places. If you come by train and arrive at Gare du Midi the building opposite Tour de Midi proudly shines his face in neon. From Galeries Royales Saint-Hubert to Boulevard Anspaach near Bourse his comic books are displayed in shop windows. One comic book of his, though, you may find hard to come by is Tintin in Congo. You see, while Belgium has never exactly been politically correct about its relationship with the former colony (its annual Christmas parade features Zwarte Piete, or Black Pete, Santa’s helper who is really a guy in black face), the comic’s depiction of the Congolese as savages drew some criticism at the end of 2012, prompting shop keepers to think twice about carrying it. Nevertheless, Tintin is a celebrated man in town, and is featured everywhere from the Belgian Centre for Comic Strip Arts to the famous Comic Strip Trail. 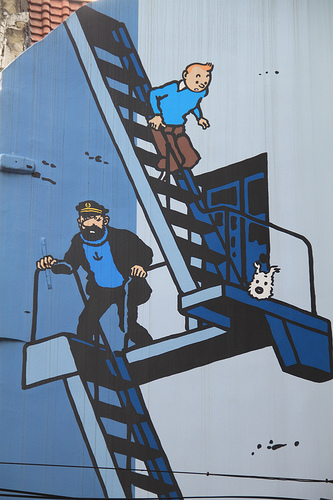 Art Nouveau, the predecessor of that crazy Art Deco craze that swept America in the 30s, was alive and hopping in Belgium at the turn of the 20th century. One of the most famous architects of the style was Victor Horta who designed other buildings around Brussels such as the Palais des Beaux-Arts (aka Bozar, which is just a stone’s throw down Rue Royale from the Magritte Museum). In St. Gilles, his personal house is open to visitors during the week but only for a few hours in the afternoon (Tuesday to Sunday, 14 to 17:30). Unassuming from the outside, the inside is truly impressive. Every detail from the wood molding to the stained glass ceiling in the center of the house is clearly intentionally and very well thought out. The district of St. Gilles owns the house and has worked to restore it to its original condition with furniture, art work, lighting and even bathroom fixtures from the time when Horta actually called 25 rue Américaine home. The visit doesn’t take very long but leaves you wondering what it must have been like to live in such a decadent residence. Bonus: For those who are students don’t forget to take advantage of your discount (half off admission!).

How to get to Brussels 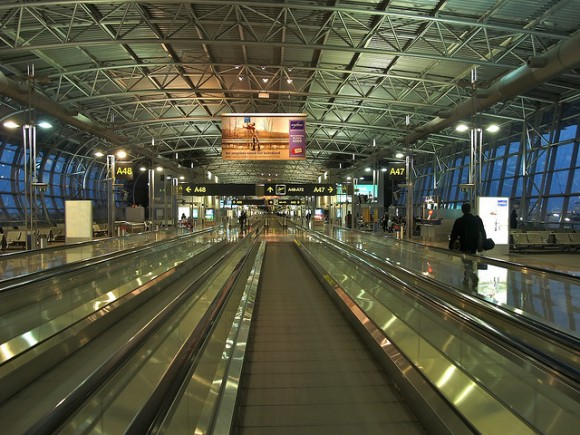 If you’re living in Italy or anywhere else in Europe, and this article has inspired you to visit Brussels, here’s how to get there. If you’re on a student budget like I am, you can save a night’s hotel stay by taking an overnight Eurostar train – you can use a website like RailEurope to search for routes and tickets. It’ll be an overnight train through Paris, for which I can only highly recommend wearing all your valuables in your pants. If you prefer a low cost airline, Ryanair flies to Brussels from Pisa, Rome and Milan/Bergamo amongst others, while EasyJet goes out of Milan Malpensa as does Brussels Airlines.

Christina Craver grew up in Silver Spring, MD, where she lived a stone’s throw away from some of the country’s best (and free!) museums. She is, as the Hawaiians would say, “hapa,” and has garnered many confused looks, and some ridiculous guesses, about her background everywhere she goes, from Los Angeles to Riyadh. Christina completed her Masters in EU policy in Florence and, after a stint in the EU parliament, now resides in Trento, Italy. She works in marketing and communication and writes for the satirical blog More Europe! She enjoys watching formulaic t.v. food competition shows, being mediocre at many languages, and confounding people with who she is, where she comes from, and what she’s doing in their part of the world.