On a recent trip to London, I took a look at what tours Context Travel had on offer for my dates – as a blogger, I admit that they let me take as many of these tours as I want, and it’s something I take advantage of because I always learn a lot more on their walks than I would if I were on my own! One of the only tours that was certain to run was of the Tower of London, and I kinda snubbed my nose at it. I think I went there when I was about 14, but was more interested in buying Doc Martens (it was 1990 and I still have and wear those boots). I’d consider that one of the most touristy places in the world, and generally my travel tactic is thinking about how to avoid tourists!

It was thus a pleasant surprise to find that we really enjoyed the Tower of London tour with our docent named Ruth. (The people at Context basically said “trust us, it’s good”.) Premise: I know nothing about British history, really. I knew there were the crown jewels there, and not much more. First off, Ruth whisked us in and headed straight for the jewels, while we saw some other tour groups standing around learning about the exterior of the building. She said the line-up would be long later, and she was so right. We had a major logistical advantage just being with her. Having seen the bling, we then did a historical introduction to the building and went inside. It’s the kind of museum I’d probably wander through bleary-eyed because of its displays of armour and mockups of military battles, which mean nothing to me. Very little of the dates mentioned stuck with me, but Ruth made the history and the space come truly alive, thanks to a good combination of a solid command of the past and a generous sense of humour. So I’ve come out of that tour thinking: if you’ve got to go to one of the most touristy places in the world, organize your logistics, get your historical timeline (and in this case, English Kings) straight, and tell all the funny stories you can.

Which got me to thinking how in many cities around the world, Context Travel’s docents approach all these very touristy places, yet manage to offer tours that distinguish themselves from the rest. How do they do it, and what tips could they offer to visitors, tour or no tour. I asked them.

“The Gallery of Honor at the Rijksmuseum is arguably the place to go in Amsterdam (or at least on the Museumplein). Dealing with the crowds there takes a combination of familiarity with the museum and its traffic flow, some of what I call “weaseling,” and flexibility or improvisation. I know that the Rijksmuseum, for example, is least crowded in the hour and half right after opening and the hour and a half right before closing, so I restructure my tour according to the booking time. As far as “weaseling” goes, I take charge and lead my group through the crowd to good spots when I know that the typical museum visitor might be a little too polite or shy to do so; in other words, I know how to make my way through the crowd and I allow my visitors to follow my lead. Finally, sometimes there are just too many people around a certain piece that I really want to talk about, and the best way to deal with can be just to talk about another piece in the room until the crowd has dissipated. 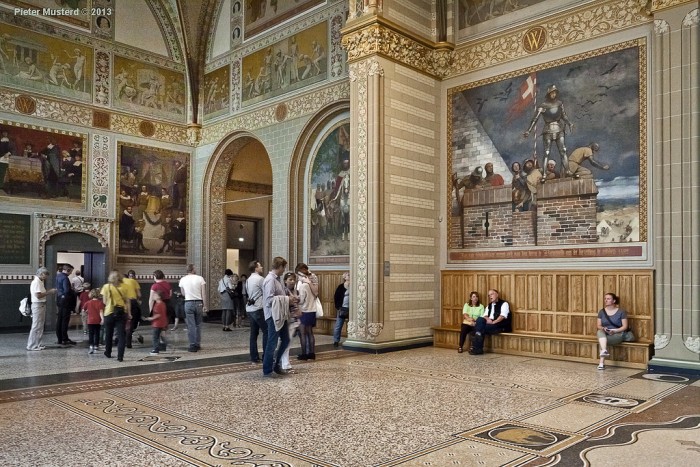 Inside the museum | Photo Pieter Musterd  (creative commons on Flickr)

The Night Watch is one of the most important pieces on my tour and–being located at the head of the Gallery of Honour (I often say that it’s the altarpiece to the nave that is the GOH)–it’s best to visit it at the least busy times because it can get crazy crowded there. There’s also usually a respectful distance between the painting and the crowd though, which I like to take advantage of. It’s also worth mentioning that Context arranges pre-purchased museum tickets for clients, which also significantly reduces queuing time at the start. ”

On the rock of Acropolis there are two things that can make our visit unpleasant during the summertime: the crowd and the heat/sun. So the first thing that I always have in mind is that we are in the shade whenever possible. I always start with an introduction of the history of Athens under the shade of the olive trees, away from other guides. Then I try to make quick stops in front of the monuments on our way up to the rock. The most crowded part of the rock is the Propylaia (Gateways) so I try to keep this part short (and in the shade). 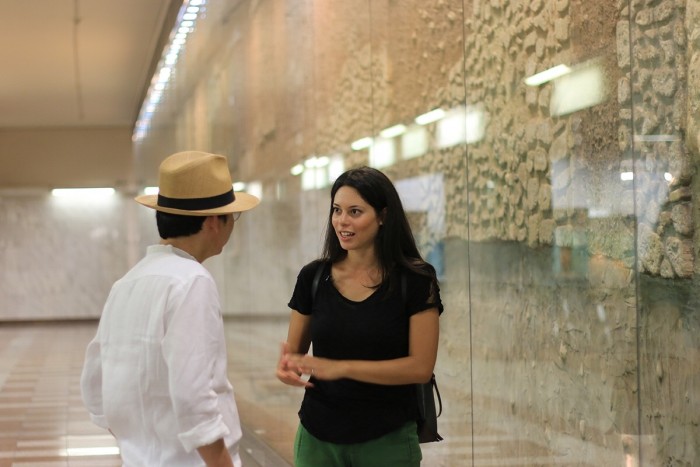 When we are on the rock of Acropolis I always combine history with myth and of course architecture: the fight of Athena and Poseidon for the patronage of the city of Athens, the birth of Athena (both of these myths are represented on the pediments of the Parthenon), the way the Athenians used their myth for political propaganda against the Spartans (by building the temple of Erectheas at the ‘site’ of the fight between the two Gods, Athena and Poseidon, underlining that at that site the Athenians have the proof of divine presence on their Sacred Rock), etc… Lastly, I explain the south side of the rock (theater of Dionysus, temple of Asclepios and medical centre).

In general, what I believe makes a tour on Acropolis a successful one, especially during very sunny and busy days, is minimalism and simplicity: indicating the most important facts that can give us an idea of the history of the city, but also taking care of the clients by always stopping under the shade, making washroom stops, drinking water, etc. Myths can give us a starting point for our narrative (ex. the Trojan war for explaining the Mycenaean years), and at the same time make the tour more fun!

“The key to experiencing the Forbidden City is timing and route.  About 80% of all visitors take the same route directly through the heart of the palace. A slight deviation left or right away from the main throne rooms to the equally fascinating courtyards in the East and West sections of the palace makes a huge difference in the number of fellow visitors in each space.

Leading a walk at the Forbidden City on a holiday Sunday (to be avoided) ! Photo Jeremaiah Jenne

Most tour groups hit the Forbidden City first thing in the morning. Scheduling your visit for the afternoon will allow you to enjoy the palace without battling hordes of tourists for elbow room in front of key attractions. If visiting in the afternoon, be sure to reserve tickets in advance. As hard as it can be to believe on some days, the Forbidden City limits the number of visitors to 80,000 each day. That is a lot, and tickets can sell out in the morning on busy weekends and holidays. To avoid disappointment, book ahead.

Finally, make a point to see some of the newly opened areas of the Forbidden City. In 2016, these include the top of the Meridian Gate and the Cining and Shoukang Palaces in the western section of the Forbidden City. The renovations are among the best in the palace, and until the state travel companies update their guide’s scripts, the tour groups will give these a miss.

From a practical point of view: I always book tickets in advance so that our Context clients need not rush to avoid being shut out of the palace and to avoid waiting long line queues. We also choose our meeting locations so that clients will not need to wait in the long police security checks which are common in the area around the Forbidden City and Tiananmen Square.“

“I’d say the trick to a good Vatican Museums experience is partly timing: avoid Saturdays and Mondays and any day after a Vatican museum closing day. Also, lesser visited areas offer a bit of breathing space and perhaps a place to sit: e.g. the Etruscan Museum, the Pinacoteca. The cafe near the Sistine Chapel is also a good spot for a break before addressing the most crowded part of the museum. 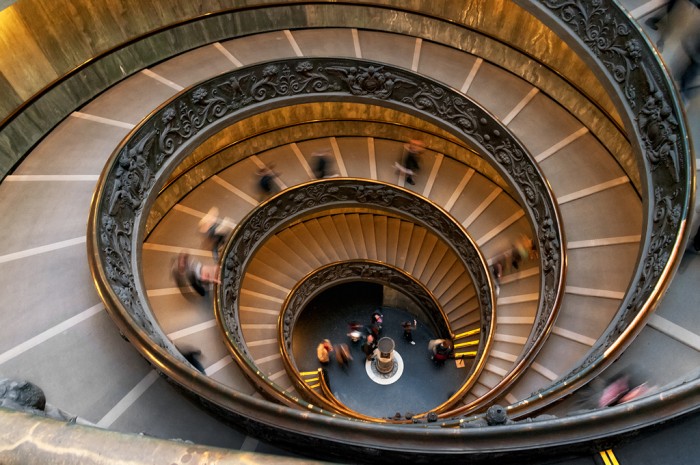 I always seat visitors down either there or on a bench before we go into the chapel to explain it, since there is a no talking rule inside. Traffic comes in waves, so if there are masses of people I usually find a quiet spot and talk about whatever’s there (pretty much everything in the collection is incredibly interesting) until there’s a gap between groups. When taking Context Travel clients, I also always explain what we’ll be seeing with rough timings at the beginning and check that that’s ok with everyone, adjusting both for interests and limitations.”

The Met holds the entire span of eastern and western art history under one (very large) roof. It’s also a defining New York tour experience, so just about everyone visits it. How can you enjoy it better? Well, The Met is open seven days a week from 10am-5:30pm, but on Friday and Saturday night it’s open until 9pm, so it helps if you can go on a Friday or Saturday night, as crowds start to taper off as people get hungry around 6pm.

The Met | Photo by
Timothy Neesam creative commons on Flickr

Plan your visit around the works you want to visit, but be open to discovering new areas. For example, Madame X by John Singer Sargent is usually surrounded by crowds, but at night you’ll be able to get close enough to see details such as the mark left by a previously wayward strap that was considered too risqué. On the other hand, ask a gallery guard to point you toward the Chinese Court Yard in the Asian Art galleries. Once you do, you’ll feel as though you stepped out of the museum and into the Ming Dynasty. Remember it’s totally OK to get tired in this museum: stay focused, and when necessary, take a break. There are restaurants both inside and in central park that can make or break your experience.

What do you do to avoid crowds at famous places around the world? Do you avoid them entirely, or use similar tactics to Context Travel’s experts?