Best Books to read while relaxing in an Italian Villa

By Katharina Allès Trauttmansdorff on Jan 20, 2016 with 2 Comments

A good book is the next best thing to traveling, transporting our minds and imaginations to far away places. Now, if you can combine travel and reading a good book, you’re particularly lucky. Imagine relaxing in the comfortable surroundings of an Italian villa – be it in Tuscany or down south in Sardinia – with the luxury of time to immerse yourself in the stories of past writers who enjoyed such places. Here my suggestions for an Italian villa holiday in the company of a selection of classics and some lesser known books by Italy’s great contemporary writers. 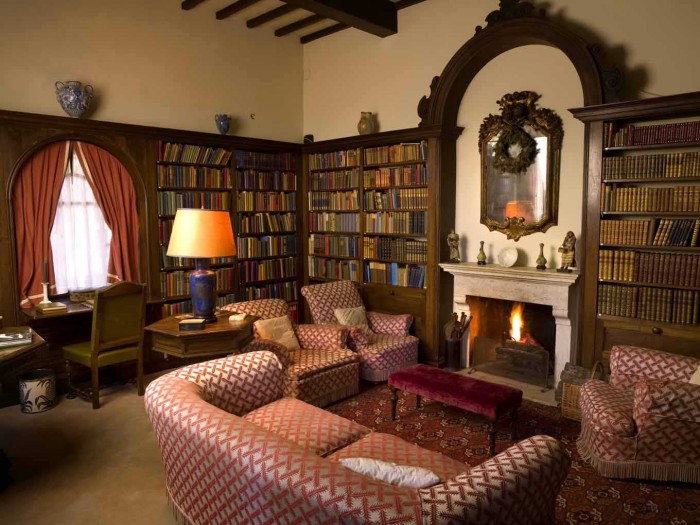 Best books for a holiday in the Tuscan countryside

The La Foce estate was brought back to splendour by Anglo-Irish writer Iris Origo and her Italian husband in the first half of the 20th century. During a holiday in the UNESCO heritage Val d’Orcia it’s easy to forget that life hasn’t always been so picture perfect as the gorgeous views may suggest. It’s hard to imagine a better place than the couch in front of the fireplace in La Foce’s Library to read the firsthand accounts written by the villa owner herself.

‘War in Val d’Orcia’, Iris Origo’s diary of life a La Foce during the Second World War, is an extremely interesting and touching read. Find more information and photos of the Origo family on my Trust and Travel blog. 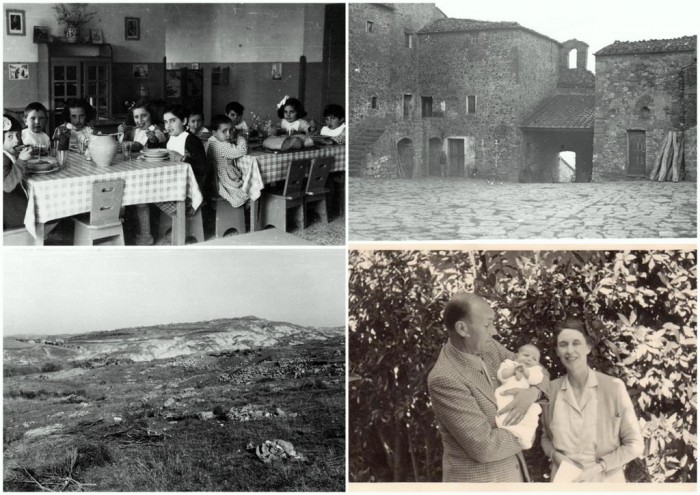 ‘The Merchant of Prato’ is a very different book and one that I enjoyed immensely. Origo’s account of Francesco di Marco Datini is an entertaining and at the same time extremely fascinating introduction to daily life in fourteenth-century Tuscany. The writer diligently studied the thousands of letters and documents in the archives in Prato and succeeded in writing a book about the early Renaissance that isn’t just for history buffs.

Best books for a holiday on the coast of Tuscany

Countryside and seaside require different books. If you plan a holiday on the Tyrrhenian Sea, you can spend long afternoons in a deckchair in one of our villas on the Tuscan coast, when reading the afternoon away is a must! For this situation, I suggest contemporary Italian literature. 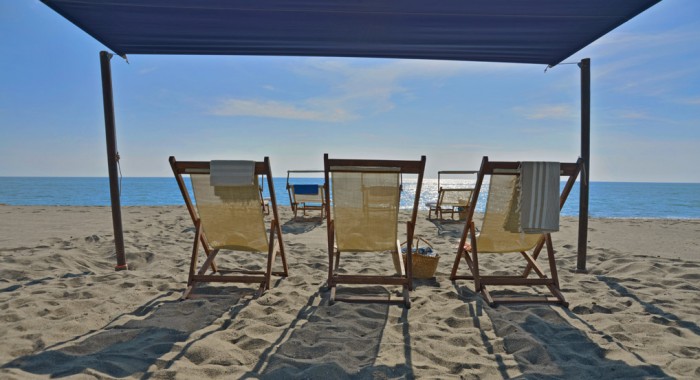 The beach at Palone Nuovo. Picture yourself here – reading a book, of course.

Silvia Avallone is a young Italian writer who has spent part of her childhood here. Her novel ‘Swimming to Elba’ has been translated into 23 languages and is the perfect antidote to Frances Mayes’ ‘Under the Tuscan Sun’. Avallone tells the tale of two teenagers who grow up in Piombino, an industrial town on southern Tuscany’s coast. Tourists cross Piombino and its refineries to take the ferry to Elba (which, on a clear day, you can see from the aforementioned deck chairs), but the young protagonists of Avallone’s honest book can only dream of the picturesque bays of the island, as growing up on the crowded beaches of their working class coastal town isn’t as easy and romantic as life in Tuscany can seem on first sight.

The Maremma coast and its beautiful beaches also feature prominently in the works of some of Italy’s most famous writers, who own (or owned) holiday houses in Castiglione della Pescaia. The writers’ homes in the shady pine tree woods along Castiglione’s shore became a sort of beachside literary salon in the second half of the 20th century. Scroll down to the ‘What To Read section’ in this article about Castiglione della Pescaia for books set and written in this lovely Tuscan port town by Italo Calvino, Fruttero & Lucentini and recent Strega prize winner Sandro Veronesi.

Best books for a holiday in a Veneto Villa

My favourite reading nook in the Veneto is the living room of Villa Tempietto at the Frassenelle state. Hidden away in the extensive park of the estate, the small but luxurious villa is the perfect location in Italy to be in hiding with a case of books. It may be the neoclassical architecture of the building that inspires me to recommend a lot of classics for a holiday here. 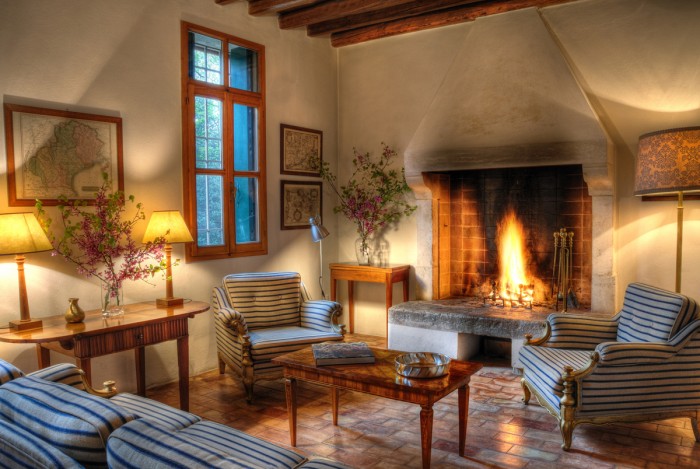 Warm winter reading by the fireplace in this Veneto Villa Tempietto

I’ve reread Thomas Mann’s ‘Death in Venice’ sitting in the shade of Villa Tempietto’s immense white columns. And since Padua is Palladio’s birthplace, I always pack his famous ‘Four Books on Architecture’ to browse after lunch on the veranda, or with a glass of wine in front of the fireplace during chilly autumn nights. This “bible for architects” has inspired many a daytrip to the Palladio Villas in and around Vicenza and the Venetian hinterland.

When in need of an easier read enjoy resorting to Donna Leon’s crime mystery series set in Venice that star the amiable Commissario Brunetti. ‘Death at La Fenice’ is the first and one of the best books in the series and no doubt on its way to become a modern classic of the genre.

Best books for a Sardinia holiday

Sardinia, an island in the south of Italy, has the fortune of being well narrated by female writers. A book that I always recommend to travellers renting one of our exclusive beachside villas in Sardinia is ‘Accabadora’ by Michela Murgia. The novel by the young Sardinian writer gives a fascinating introduction to life on the island before it became a sought after tourist destination for its crystal clear waters. You can find an introduction to the intriguing and surprising theme of the book on my Trust and Travel blog. 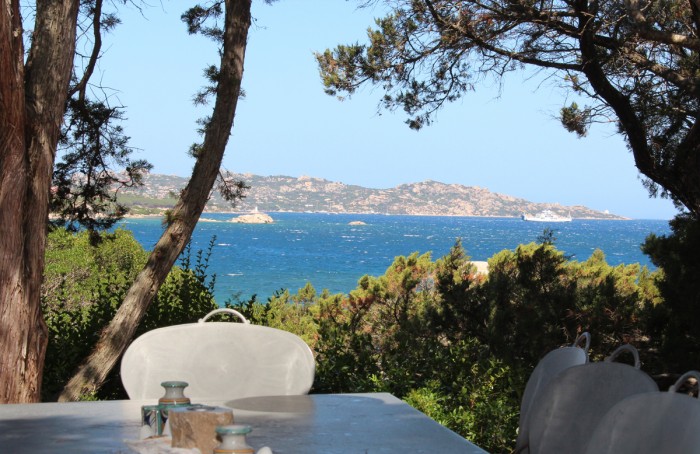 Book with a view? Sardinia’s rugged territory seen from the luxury of our villa rentals

Few people are aware that Sardinia is the home of writer Grazia Deledda, who was the second woman to receive the Nobel Prize for literature in 1926 (and, after Giosuè Carducci, the second Italian citizen to do so). The committee explained the decision to award the prize to Sardinia’s most famous author with the following words: “for her idealistically inspired writings which with plastic clarity picture the life on her native island and with depth and sympathy deal with human problems in general”. ‘Voice of Sardinia’ is the title of an article on the Noble Prize committee’s website which makes for a great introduction to Grazia Deledda’s work – for the English reader, try her 1913 ‘Reeds in the Wind‘.