You might have thought it was just a cheap cheese and tomato pizza. But a Margherita in Naples is a thing of refinement. Only the freshest tomatoes, the thinnest crispiest base, real herbs and the best mozzarella are used. And it’s cooked in a proper, searingly hot wood-fired oven. Sometimes it comes with several fat dollops of ricotta and a couple of sprigs of rocket on top. It makes eating on a budget seem like gourmet heaven. 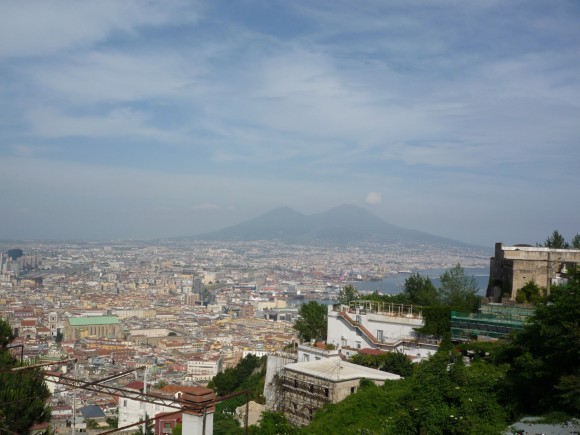 The bay of Naples seen from one of the city’s higher points (photo: ArtTrav)

Naples is a great place for an autumn short break – still sunny and bright as the UK shivers with cold – and along with being a delight for anyone who likes food there’s plenty to see and do. These are just some of my personal favourites.

Naples has its share of museums and churches and you’ll find plenty about them in the guidebooks, but for me the attraction of the place is the life on the street – this is the real beating heart of the place. A couple of minutes’ walk down Via Duomo past the city’s hulking cathedral, you come to Via San Biagio dei Librai. Small shops, little cafes selling eye-wateringly strong coffee, sudden courtyards, people hurrying past – the place is buzzing. Be sure to keep an eye on your bag and then just go with the flow.

Look out for a remarkable little shop on the left that repairs dolls. The Doll’s Hospital is like Pinocchio’s dad’s workshop. Ornately painted wooded faces stare out at you from every shelf. 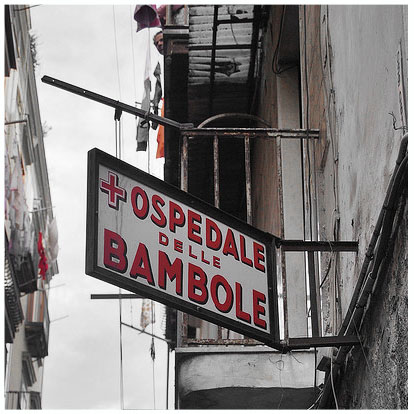 Your meandering brings you eventually to Via Pignasecca and its street market. Stall holders clamour for your cash, fish and eels wriggle in plastic crates, octopuses slip their tentacles over the rims of their captive buckets. 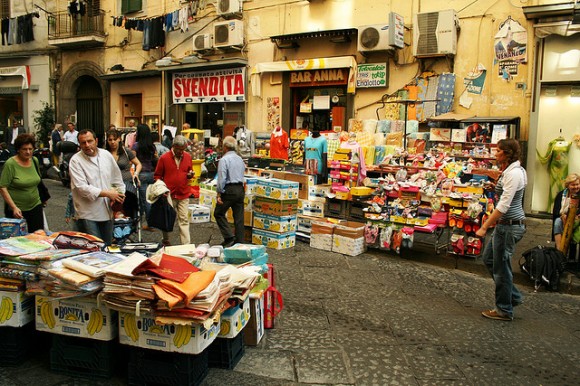 And then there are the views. Naples has several funicular railways up to the heights of the Castel Sant’ Elmo and up here above the city you can stroll around the ancient ramparts. The views across the town and the bay of Naples are awesome. Try to get there as dusk is falling and neon lights begin to sparkle across the rooftops. Across the sea, the sun sinks slowly into the waves painting the sky a deep pink and opposite it, across the bay the brooding might of Mount Vesuvius looks down on the city.

It’s a half hour train ride out to Pompeii from Naples and you won’t be disappointed. Pompeii fascinates by virtue of its scale and in the most tiny of details, perfectly preserved under many feet of volcanic ash. It’s a vast site and you need some serious energy to get round the whole lot. Visiting in Spring or Autumn is ideal as the weather is cooler and there are far fewer tourists. Unlike most other Roman ruins, there are many streets outside the main forum that are still well preserved. In fact, the temples at the centre of the town are nothing particularly special if you’ve seen other Roman ruins. At first I wondered what all the fuss is about. I’ve seen far better preserved columns and pediments elsewhere. 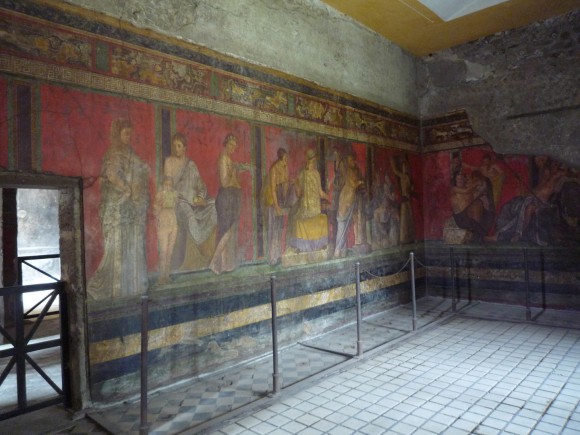 One of the fantastic paintings at Pompeii (photo: ArtTrav)

It’s as you wander further into the depths of the town that you realise why many see this as the world’s most impressive collection of Roman remains. There are villas, shops and restaurants, street after street of them. With a little imagination you can almost see toga-bedecked officials lounging on chairs inside, maids scurrying past you in the street with the shopping, the baker stoking the bread ovens. In the bakery, 81 carbonised round loaves were found already cut into eight slices and ready to be sold. Outside several of the larger villa buildings are fine mosaics of growling dogs with the legend Cave Canem (Beware of the dog!) underneath.

If you’re still standing after wandering around the many houses and shops, taverns and baths, you come eventually to the town’s amphitheatre where gladiatorial displays of daring took place. Its expansive three tiers of seats were able to hold 20,000 spectators. There’s also a smaller structure back nearer the town centre called the Odeon, which was for theatrical performances. Both are good places for sitting a while and resting your feet. Once a tour group had come and gone I was completely alone in the Odeon. I conjured up images in my mind of ancient Romans brandishing swords and audiences clapping and shouting. And that’s what’s so great about Pompeii – as long as you avoid the middle of summer, it’s big enough to mean you can get away from other visitors and let your imagination run wild. It may be several centuries old, but here you can be back to the days of the Romans in an instant.

British Airways and EasyJet fly direct to Naples from Gatwick Airport. Flight time is around 2 hours. For a weekend trip, I find it becomes more relaxing if I use the Gatwick meet and greet parking which costs just a tiny bit more than long term parking, but with the convenience of just showing up and handing over your keys. When time is at a premium as it is on a short trip, this is a fabulous luxury!

Italy is well served with high speed train service. The Milan-Rome-Naples line is the one that, of course, serves Naples, usually with an intermediate stop in Florence. From Milan to Naples it takes just under 5 hours; from Florence it’s 2 hours and 40 minutes. You can take the old Trenitalia trains or try the newer Italo, which sometimes has competitive rates if you book in advance.

This is a guest post by travel writer and broadcaster Jeremy Head. He’s written travel features for many major UK newspapers including the Guardian, the Daily Mail, the Times and the Independent, and has recently published a Frommers’ guidebook to Seville.